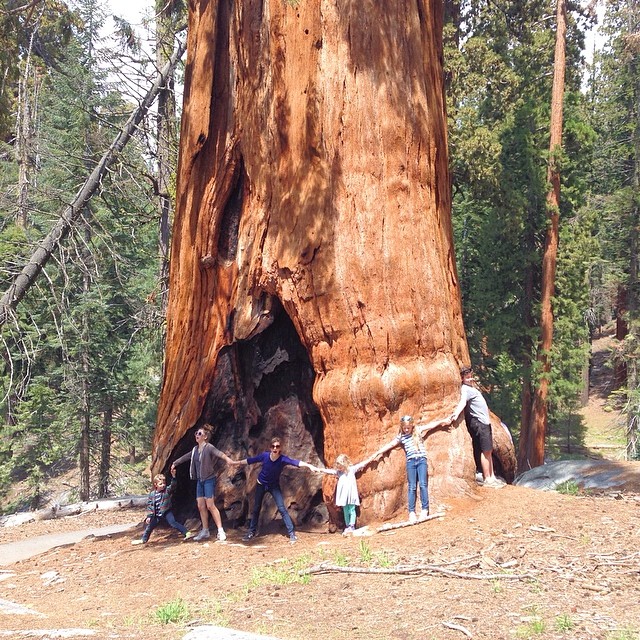 In May of 2014, our family (and our exchange student from France, and dear family friend, Charles) visited Sequoia National Park. It was our first time at the park and I just ate it up. Sequoias are the biggest trees in the world (though not the tallest — those are redwoods), and they were more magnificent than I imagined. The Sequoias have such a presence. The idea of trees talking, or having a personality, or coming to life a la Lord of the Rings, seems like a perfectly reasonable thing when you are there.

But that’s not actually what this post is about. While we were at the park, we stopped into one of the visitor centers and I saw a massive mural that took up the full wall space in one room. It was filled with illustrations of dozens of flora and fauna native to California. By massive, I mean one stretch of the mural was maybe 6 feet high by 16 feet wide, and the other stretch was 6 ft wide by 12 feet wide. The sections covered the walls in a big room. 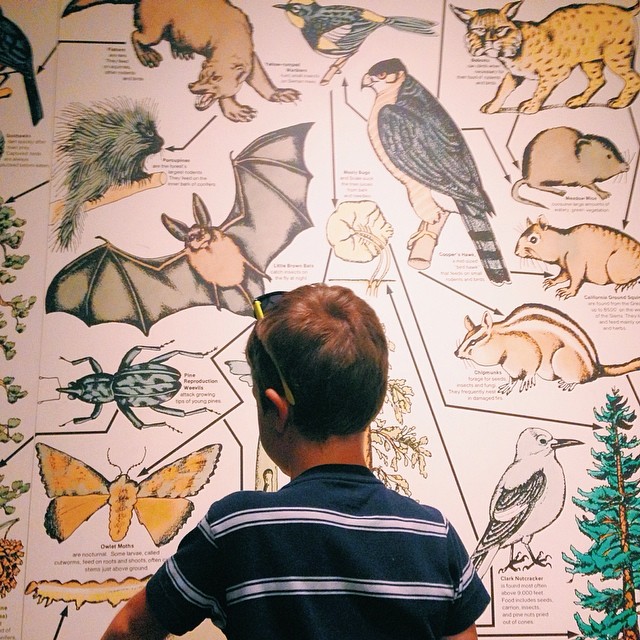 I Instagrammed this snapshot of the mural that very day, and wondered aloud in the caption, how I might make something like this into wallpaper for my own home.

After the visit to the park, I couldn’t get this custom mural wallpaper out of my head. I emailed the staff there and asked if they had any digital scans of the mural. I didn’t hear back from them for quite awhile, but eventually I did, and they sent me digital files. Since then, the files have been sitting in my inbox, waiting for attention. I knew they weren’t big enough to print at full size, but figured I might find a use for them in the future.

The future has arrived. This month, I’m working on preparing the boys’ bedroom for Ralph’s arrival home from Colombia (we haven’t seen him in two years!). The room has gone through some transitions since I last shared it, and it currently only has one bed. So we need to make some changes. I have several goals for this space, and I’ll tell you more about them in another post, but as I thought about what I wanted to put on the walls, I remembered those digital custom mural wallpaper files.

I opened them again, and started playing around with the tracing tool in Adobe Illustrator. Not to get too technical, but Adobe Illustrator is drawing software that uses vectors instead of pixels. And the nice thing about vectors is that they can be resized — even really big — without losing quality or becoming pixelated. My thinking was that if I could turn the too-low-resolution-to-print illustrations into vectors, I would be able to up-size them and print them as a custom mural wallpaper.

The original mural is titled Web of Life, and has arrows indicating the relationships between the plants and animals. It also includes written descriptions of each living thing pictured. I knew I didn’t want the arrows in the version I was creating for the boys room, so I edited those out. I also knew that on the digital files, the smaller type on the written descriptions was too fuzzy to read. So I took those descriptions out too, but made notes of the names (which were readable).

The boys’ room is not big, and I didn’t want to overwhelm it by covering all four walls. Instead, I decided to make the wallpaper/mural for the one blank full wall in the room (blank meaning no doors or windows). I measured the wall, then made a file that was 25% of the full wall measurements in Illustrator.

Next, I would choose a specific illustration from the digital files, isolate it, and bring it into Illustrator to recreate it with vectors. Once it was vectorized, I would place it in the new mural file I was creating (the one that was sized at 25%). As I added more plants and animals, I moved things around, and resized them, until they fit together like a puzzle. As you can imagine, there were a ton of different versions as I worked.

Since he’ll be sleeping in this room, I involved Oscar in helping me choose which animals and which plants from the original mural he wanted in his new bedroom mural. We have a pretty clear idea of how furniture will fit on the mural wall as well, so we were trying to be mindful of that as we placed animals and plants in the allotted space. For example, we wanted to make sure the California Black Bear wouldn’t be blocked.

Once we had the final floral and fauna in place, I went in and added the names. I wasn’t sure if I wanted to add them at all, but I remembered a huge World Map I grew up with, and how me and my siblings memorized certain parts of it just because it was there. So then I thought, why not add in another layer of knowledge? : ) I also designed the whole thing with a 3 inch bleed (1.5 inches on each side), so that I can trim edges once it’s installed. Here’s how the design turned out: 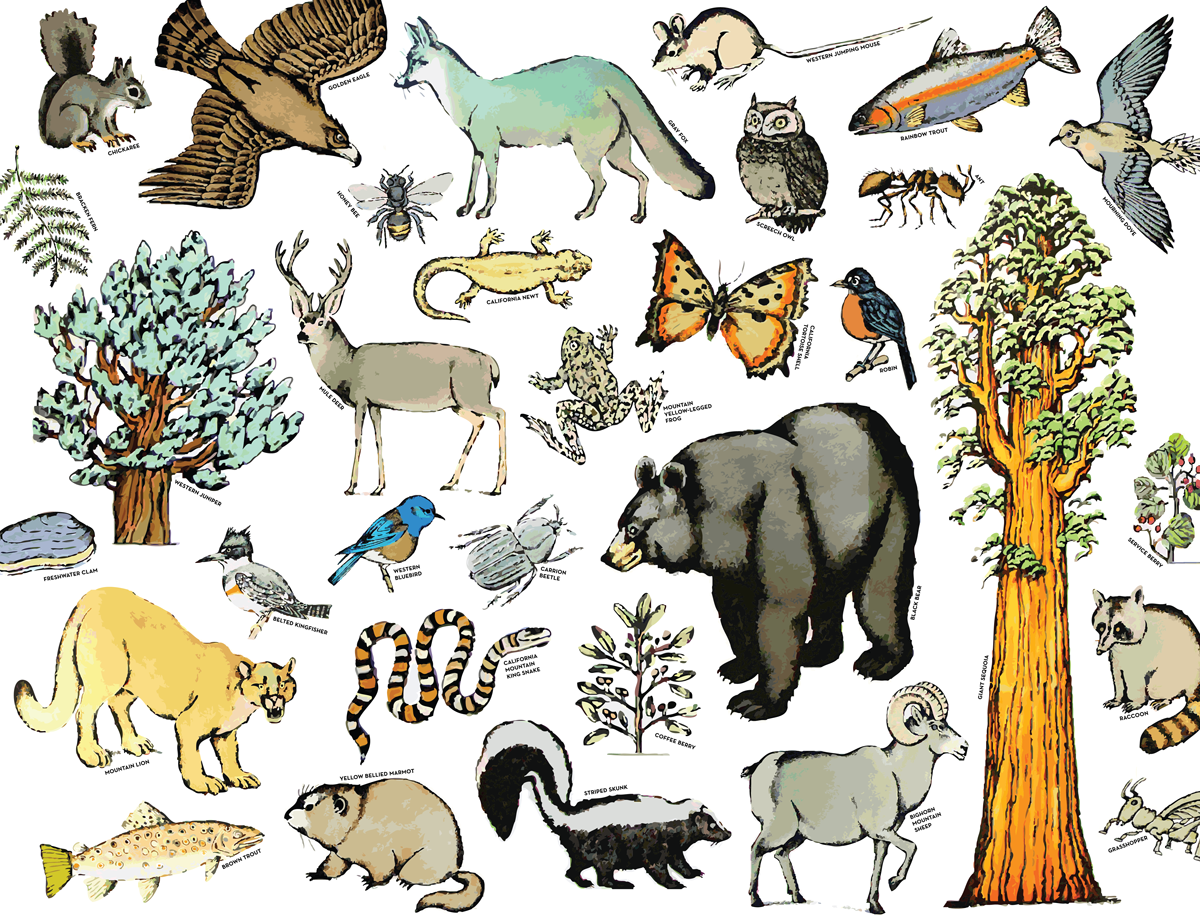 Is it okay to tell you I LOVE it? The finish size (with the bleed) is 10 feet 6 inches wide by 7 feet 11 inches tall. I love the colors. I love the Giant Sequoia tree. I love how California it is. The National Parks mean a ton to me personally, so I love that this mural originated in a National Park. I’m so into this project!

Now it’s time to have it printed, but I’ve never created a custom mural of this size, and really don’t know much about what my material options are, or what the costs are like. So last night, I uploaded the file and details to five different sites to get estimates (I just did a Google search to find printing options): MuralsYourWay.com, EazyWallz.com, MagicMurals.com, DesignYourWall.com, and TotallyCustomWallpaper.com.

The first place I tried was actually Spoonflower, but they didn’t seem to have a custom mural option. That said, I think this design would be really fun as a tablecloth too. Or a throw pillow! So maybe I’ll have some fabric printed at Spoonflower.

Once the printing companies have sent price estimates, and I can compare the materials they offer, I’ll make my decision on where to order.

Have you ever had something this big printed for a wall installation? I’d love some advice. I know it will come in panels (like wallpaper), but other than that, I don’t know what questions I should be asking of the printer. Do I want self-adhesive? And if yes, is that sort of thing available in a canvas-feel or matte option? Is re-positionable important? Is it better to go with the type of paper where you have to wet it to activate the adhesive and apply it more like traditional wallpaper? Do you have a favorite company you use for printing this kind of thing? Any other tips I should keep in mind?

Other thoughts on this project? I haven’t ordered yet, so if you have helpful advice — on the design or the printing — I’m all ears. Trying to design at scale is so tricky!

P.S. — I can’t wait to tell you more about my plans for this room!