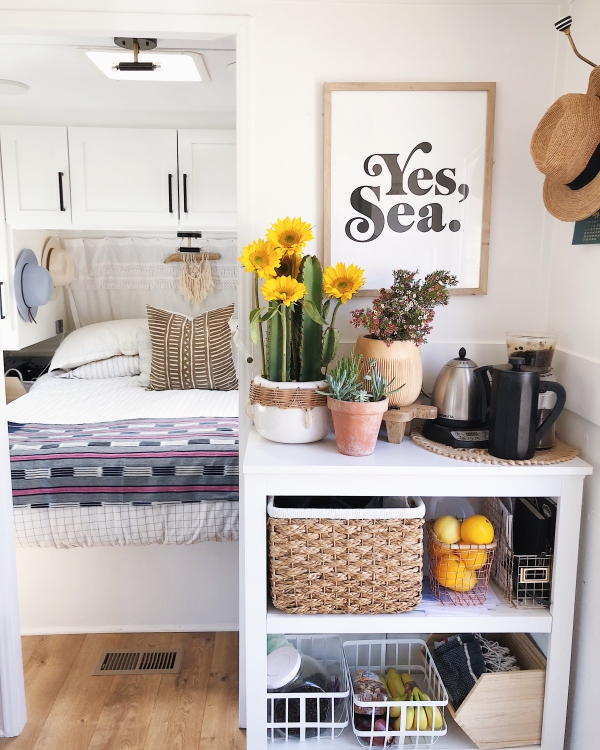 What a treat it is to introduce you to Ashley Petrone, and her husband Dino, and their three kids. It’s always fun when we get to explore someone’s living situation that is slightly off the beaten path. And the Petrone family fits that bill perfectly. When Ashley and her husband bought a beautiful piece of property in Southern California, rather than building a traditional home, they invested a small amount of money, bought an RV, and did a complete renovation of the interior.

Every little corner is so appealing — it might just convince you to sell your house, move into a tiny space, and sit out on summer nights under the stars. Welcome, Ashley Petrone! 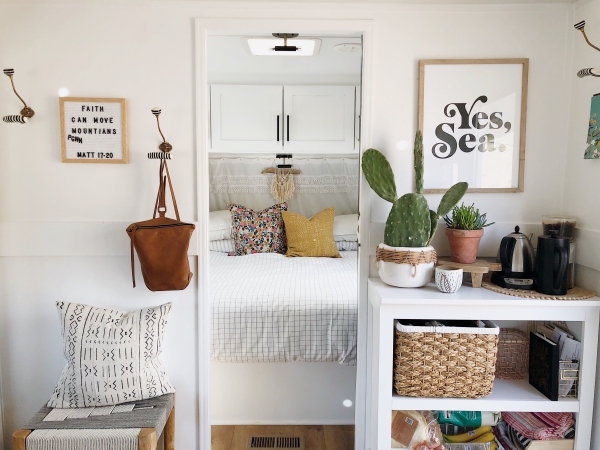 Hello. Our family of 5 lives here. Dino and I met when we were younger — our moms became friends sitting on the sidelines at the soccer fields. Dino is 4 years older than I am, so we were all just childhood friends. But years later, right after my 20th birthday, our moms set us up! We hung out for 3 weeks straight and he popped the question. Twelve years later, we’ve added three kids, and we are still happily married. It’s that cliché saying, but when you know you know.

Our three kids are Gabe – age 9, Gavin – age 7, and Quinn – age 5 (two boys and a girl). All of our kids are so very different, and yet, they are all super crazy. But if you take one of them out of the mix, they all seem to calm down… its very odd. I guess they feed off of each other. : )

Dino is a web developer, and I blog and do interior design. I used to be a homeschool mom, but this last year I switched it all up — our kids started attending traditional school, and I focused on my blog and design. 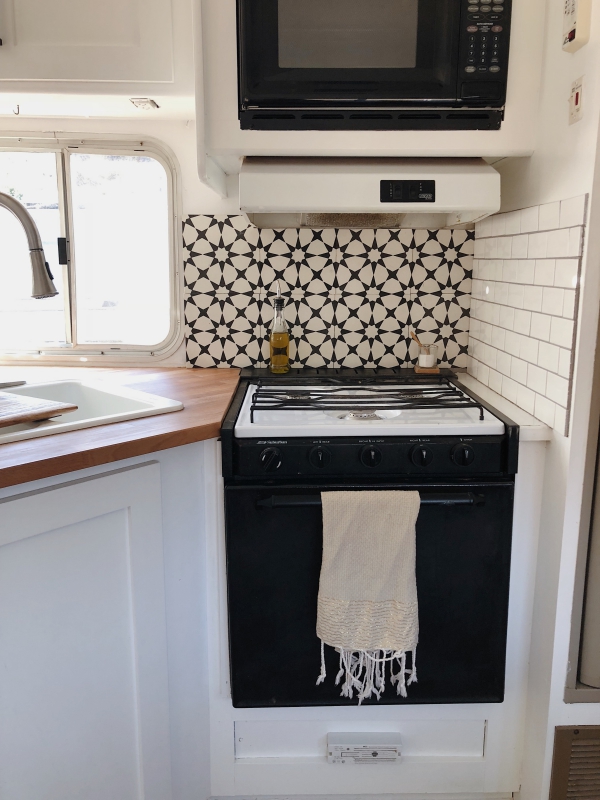 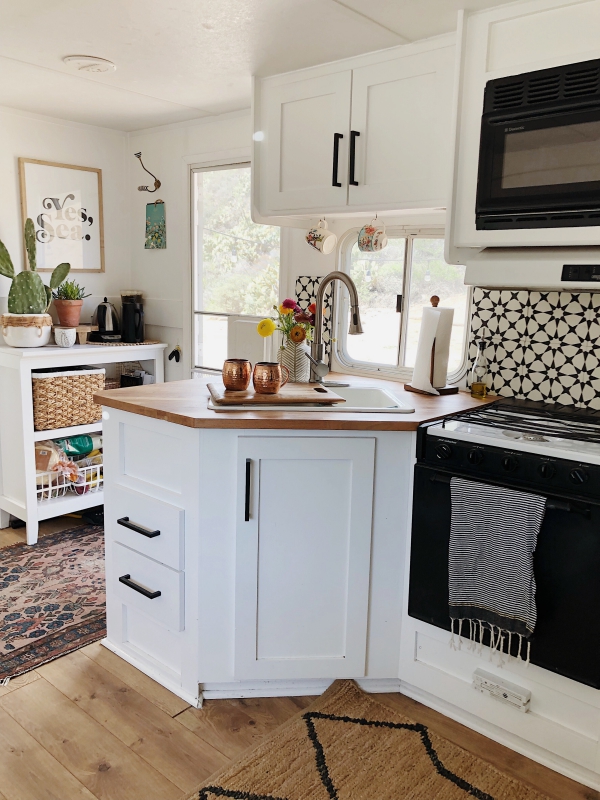 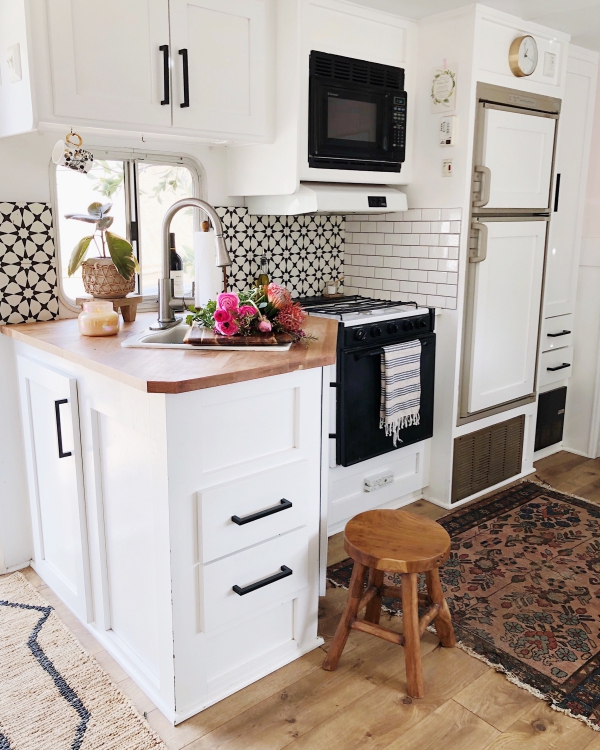 We live in the Santa Rosa Valley area of Southern California. The area is rural, and the houses are quite spread out. The area we live in is beautiful. People would definitely consider it the country — rolling hills and big lots. Everyone has some kind of farm animal. Houses here typically cost over a million dollars.

We love it because it’s so quiet. The downside is the only access to our home is two lane road, so it does get backed up with traffic, and only one way in and out. 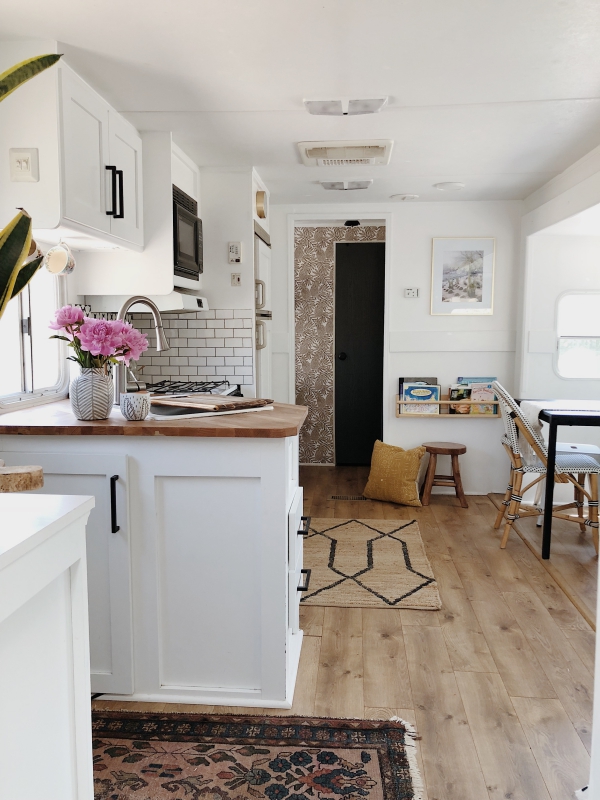 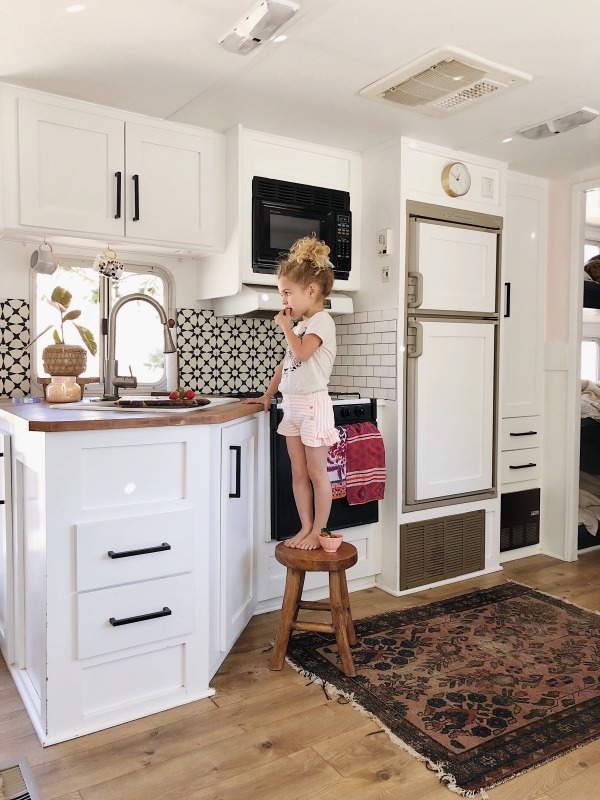 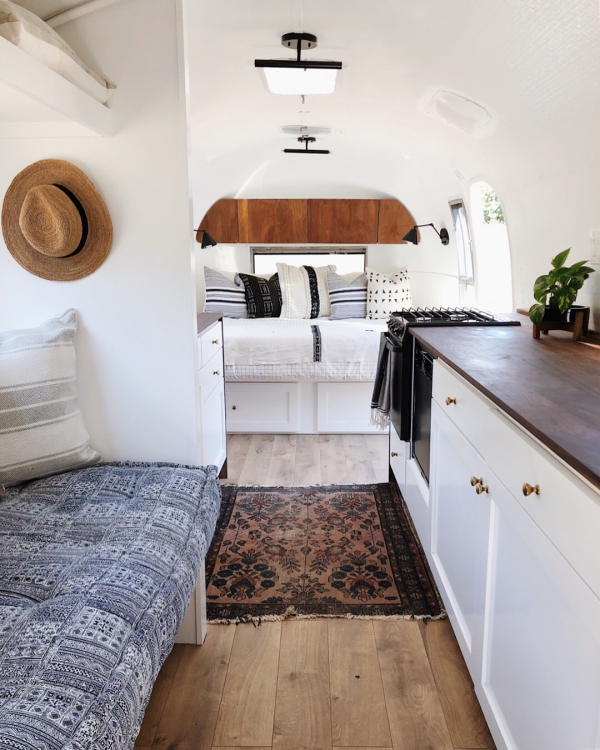 Not too long ago, we sold our 5 bedroom, 2800 square feet home. We had bought it at the low end of the market and sold it when everything was high. We decided to sell because we found land in Santa Rosa Valley, California and thought, “What the heck, lets build a house!”

The land was a great price at $300k (which sounds like a lot but is a really great price for SoCal — prices are really nuts here). We did as much due diligence as we could, and we thought the land was already compacted and ready to build on.

While the house was being built, we had to figure out where we wanted to live: We could rent an apartment but pay more than our mortgage was. We could buy a tiny house. Or buy an RV. We ended up RV shopping and found ours. It had 3 bunk beds in the back and we were sold. 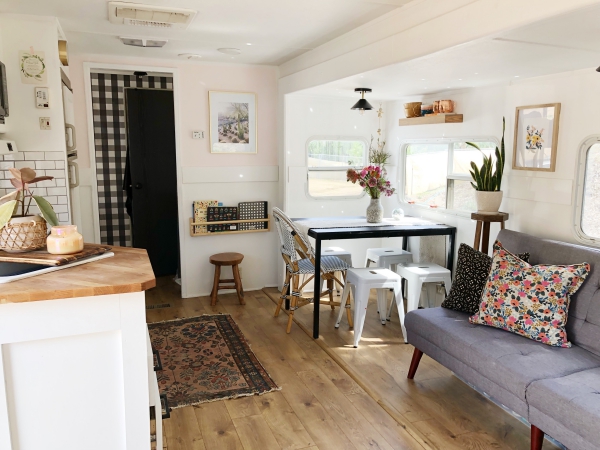 We bought it for $8000, and put $3000 into renovating it. We did a lot of the work ourselves. I designed it all, and then hired out any work we didn’t want to do. I love finding deals so it was fun for me to furnish the inside on a budget.

We designed the trailer to stay stationary. My goal was to make it feel like a home, and having the house be stationary really helped with that. But, our best friends have a big truck, and if ever we need to move it, they help us out. 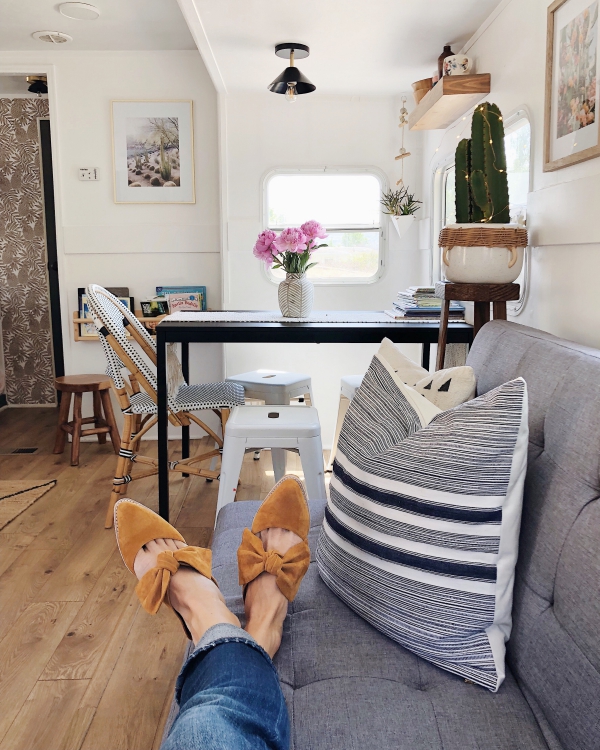 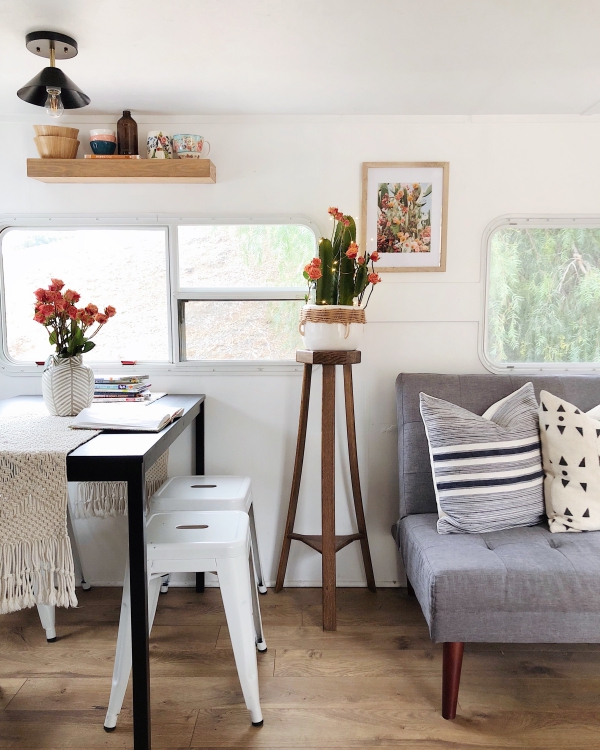 When we were deciding where we wanted to live during the build, I had recently started my blog and Instagram account, which centered around design. I can honestly say, that was a big part of the decision. We knew if we rented an apartment, we couldn’t do too much as far as adding our own personality — which meant less opportunity to showcase my design work.

Also, the thought of renovating a trailer really excited us! It was different — not a ton of people were doing it, and when I researched how people were renovating them online, no one had really done a renovation the way I wanted to do it.

I loved renovating the RV! It’s so small, that I almost felt like it was a play house, and it was easier to take risks. I think it helped me feel confident in my design skills. 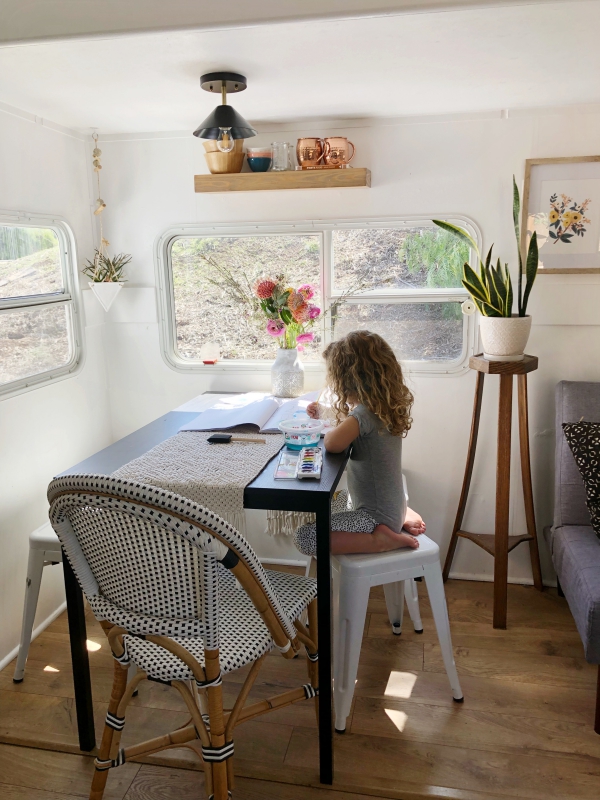 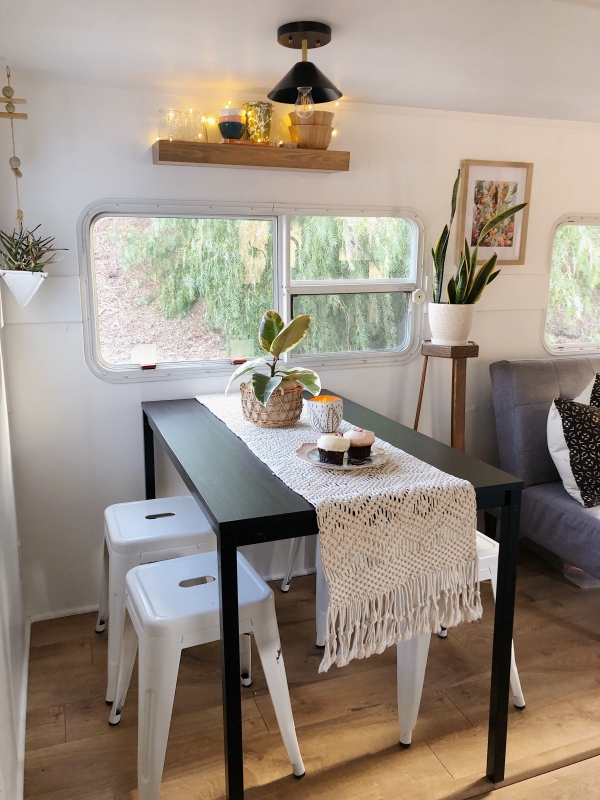 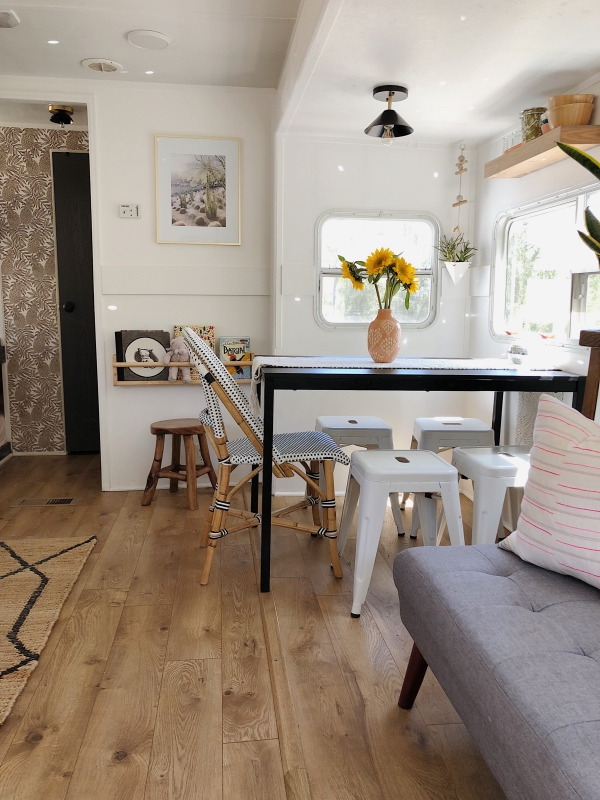 The longer we are in the RV, the better it gets. It really was a process to learn how to function and co-exist together in this small space. It’s like everything is amplified and there is no where to run or hide if there’s a problem. It forces you to work things out.

We learned to have a lot of grace for ourselves and for each other. We definitely want to live in a conventional home again someday. But what I love about this lifestyle. is that it has taught us to go with the flow. Listen to God and just enjoy the journey.

Now we are pretty much down for whatever. So it really broke us out of the mold we were in. 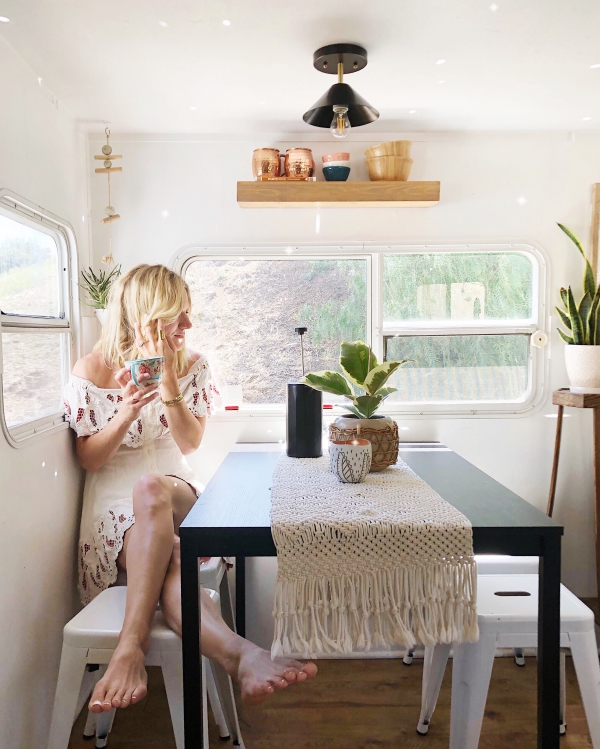 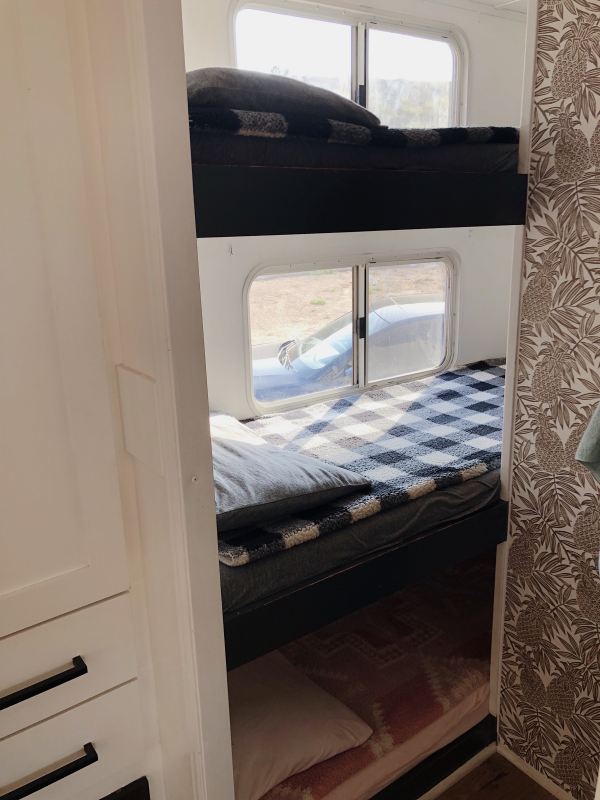 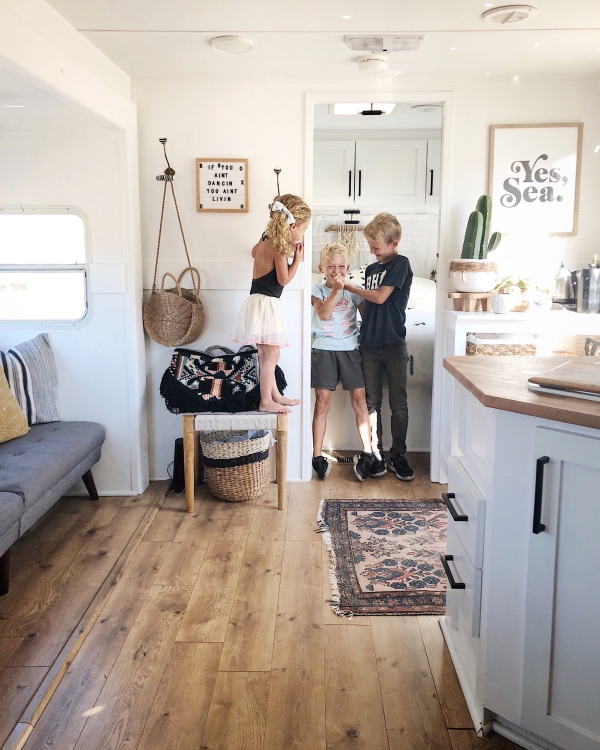 As a creative person and mom, blogging allows me to share my thoughts and projects, while still being at home with my babies. I feel like it’s an outlet for the creativity that I have all bottled up, so its very freeing. It’s awesome to be your own boss. I’m someone who doesn’t even like going on guided tours where I have someone telling me what to do. So having the ability, at least for now, to stay home and control my own work, is a huge blessing I am thankful for. 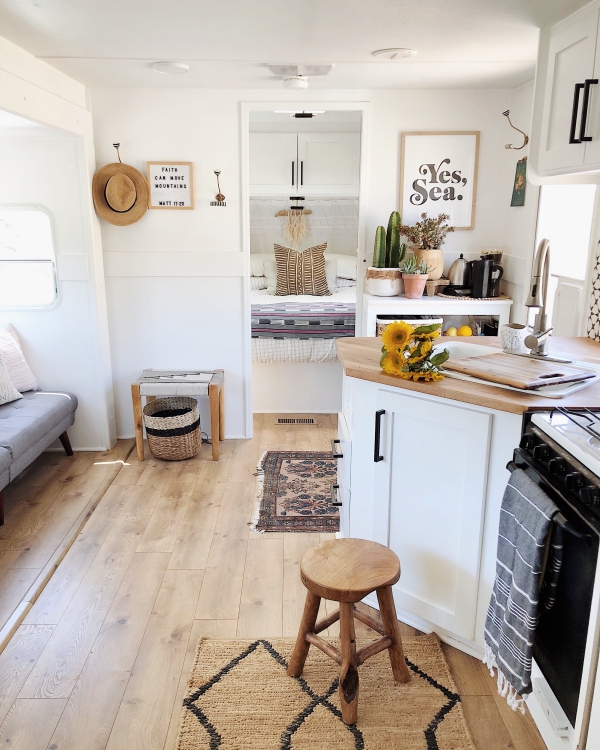 I think the biggest thing that stops people from pursuing what they love, is themselves. Fear creeps in and we just don’t ever say ‘yes’ to something we want to do. So I always encourage people to go for it. The best advice someone gave me was to be myself. Be real and authentic and people will love you. And if they don’t, they won’t follow. But it sure is freeing just to be you! 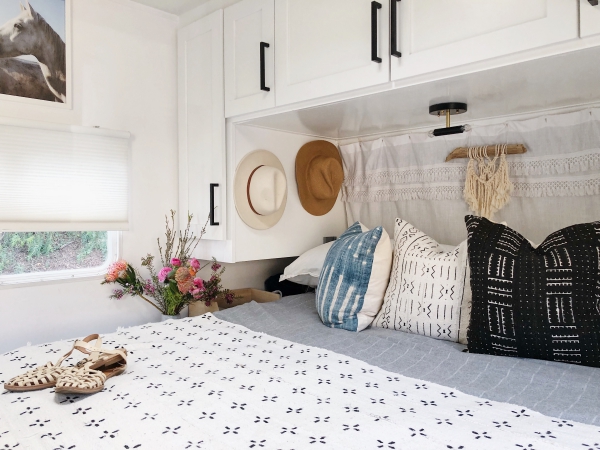 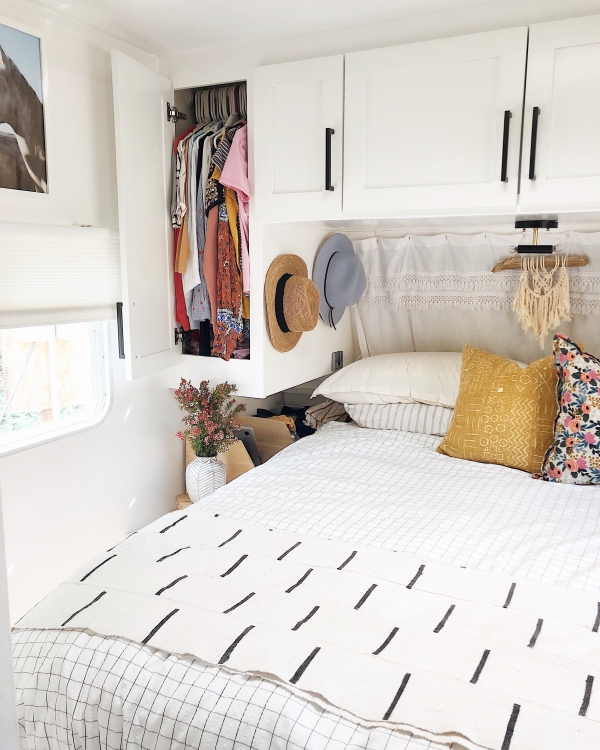 After I had my kids, I really wish someone had told me to not worry about my weight after they were born. I had my boys 16 months apart. So 8 months after my first son I was already pregnant. After I had my second son, it was my life’s mission to get my body back into shape — it just felt like it had been so long since my body had been my own.

I started working out before I was supposed to and I worked out hard. I already had a fast metabolism and I ended up losing my milk after 1 month because of it. 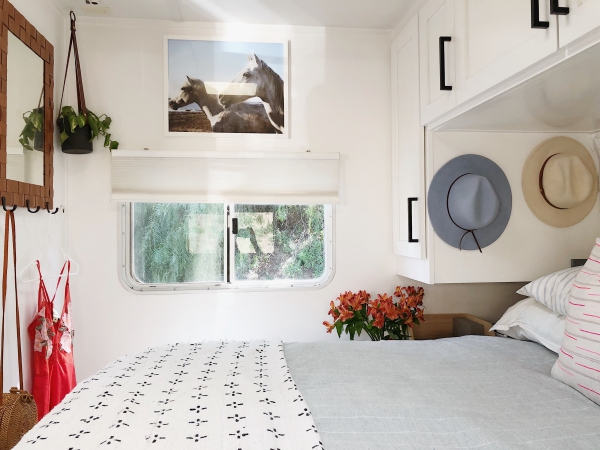 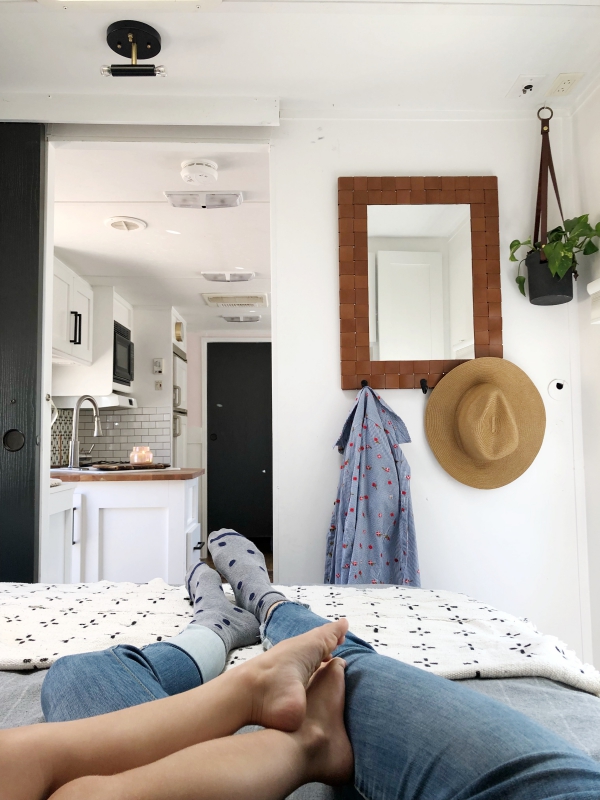 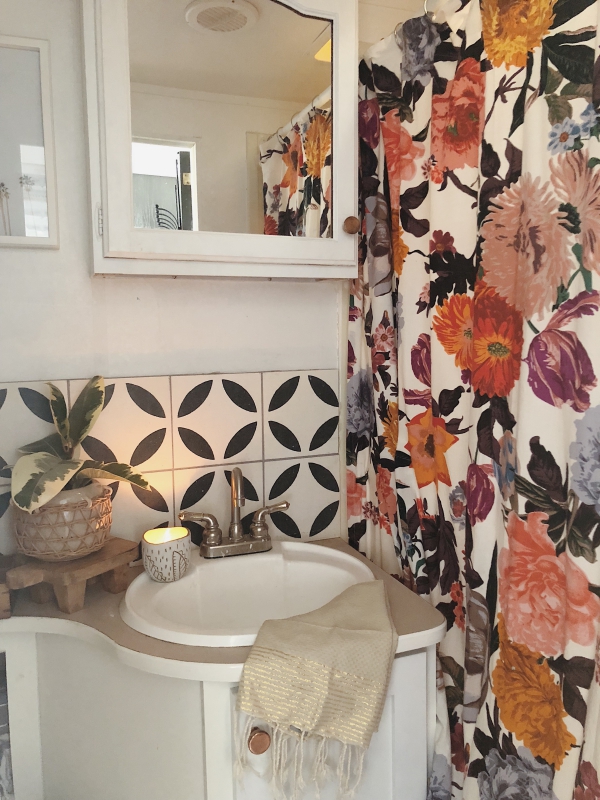 I feel so foolish looking back. I was so eager to get my body back and to do my own thing, I really don’t remember too much about my second son’s first year. It hurts my heart thinking about it.

Two years later we had a little girl and I was so much more intentional about how and where I focused my time. It was the best decision I could have made. So I wish someone would have told me to not worry about your body so much and to enjoy every second, whatever you look like. There is time for that later, but those precious newborn days you can’t get back. 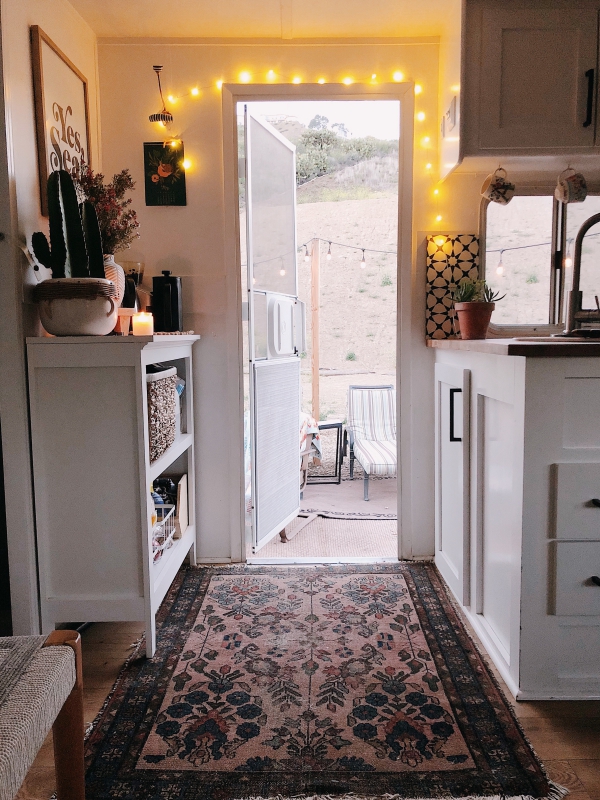 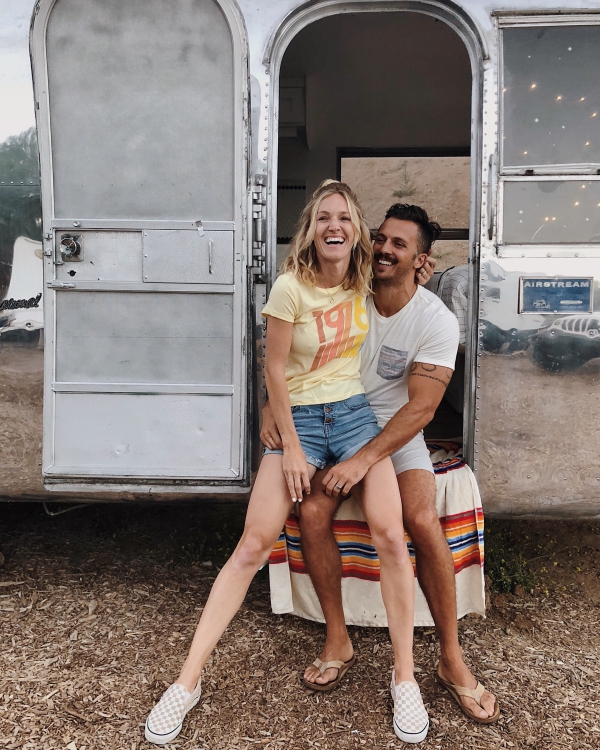 I hope the kids remember how wonderful and simple life is right now. I hope they learn from our RV life, that they can do anything if they put their mind to it.

I don’t want them to forget anything! Even the ugly stuff has something awesome in it that they can learn from and use later in life. There was a time when Dino and I got in an argument and I stomped off only to realize I had no where to run or slam a door (because we have none) and we just started laughing. So even in the times we struggled, we still found joy. 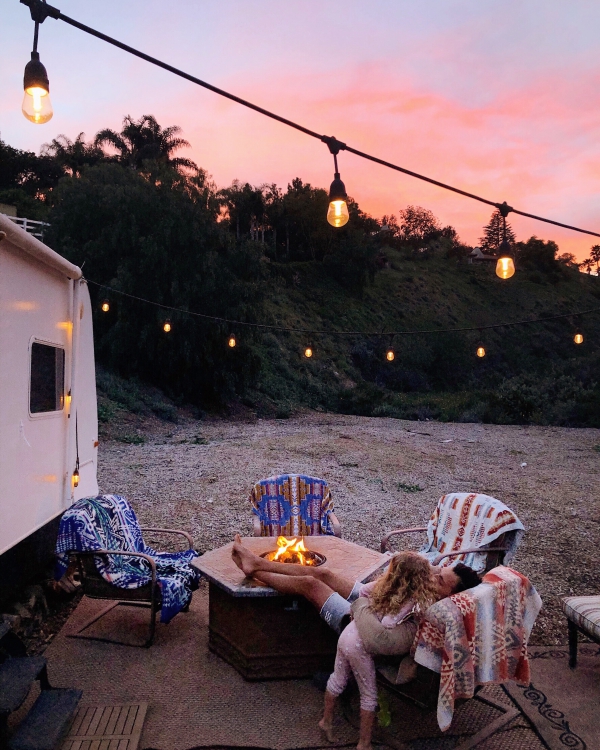 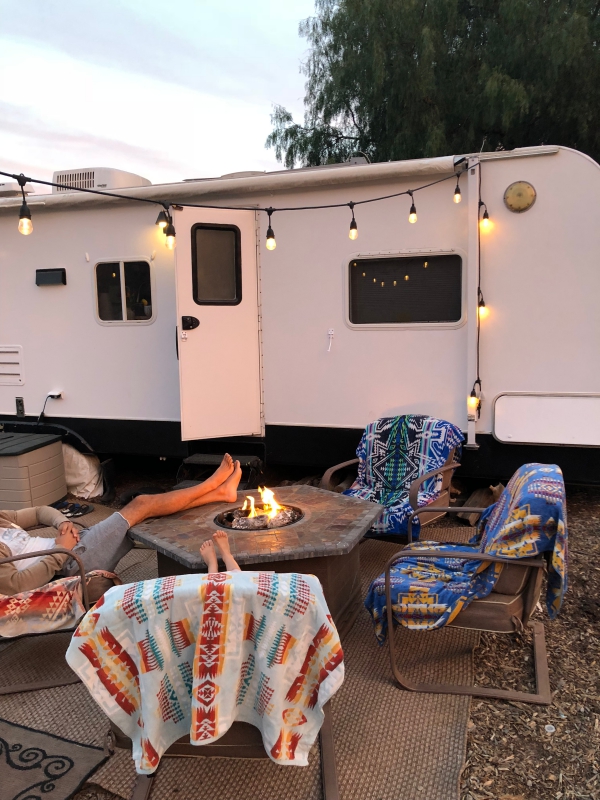 I love how much my kids teach me. They are always stretching me and forcing me to grow. As I’m teaching them, I’m changing and learning how to be a better mom and woman. I try so hard to appreciate every day with them because I know time goes by so fast. Sometimes I wish I could start it all over again and soak it in more. 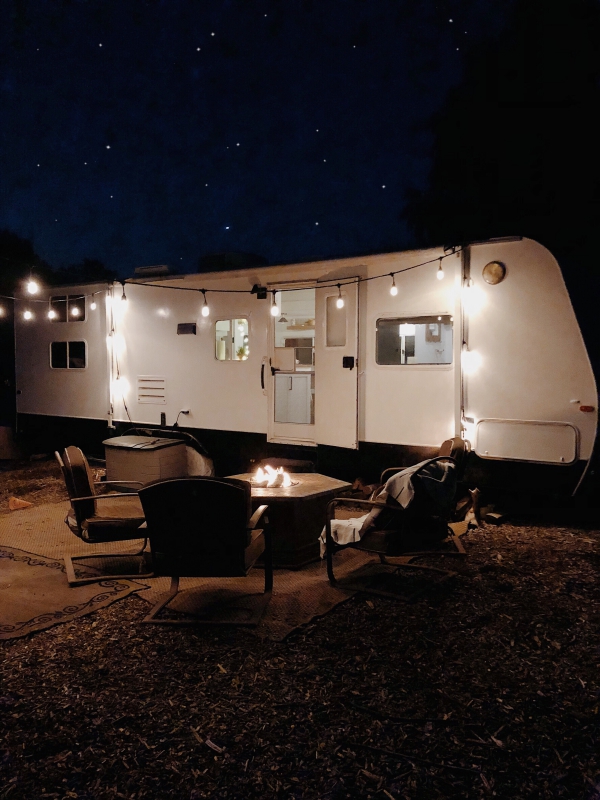 Thank you, Ashley Petrone! Your RV really does seem magical.

The style and details inside are so happy, and I think those shots of the family gathered around the fire pit at sunset, with the twinkly lights up above are magical. Seems like a pretty wonderful way to spend a childhood. I am sure that living in a small space has its own sets of challenges, but these photos have me thinking it just might be worth it.

I also really love what Ashley said about “be real and be authentic and people will follow you.” Or they won’t, but that’s none of your concern. I’ve heard that idea several times lately, and it resonates for me. Love your self and the rest will fall into place. But doesn’t it seem like the simplest advice is often the hardest to follow? There are things we have to hear over and over again before they sink in.

Could you and your family live in an RV together? Do you love the romance and the charm of the idea? Or do you think you’d be at each other’s throats in minutes? What do you think about living in a small space?

YES SEA art by Daniella Manini
Pillows
Dining Table
—-
You can follow more of Ashley’s adventures on her blog or on Instagram. Living With Kids is edited by Josh Bingham — you can follow him on Instagram. Would you like to share your home in our Living With Kids series? It’s lots of fun, I promise! (And we are always looking for more diversity in the families we feature here. Single parents, non-traditional parents, families of color, LGBT parents, multi-generational families. Reach out! We’d love to hear your stories!!) Email us at features@designmom.com.