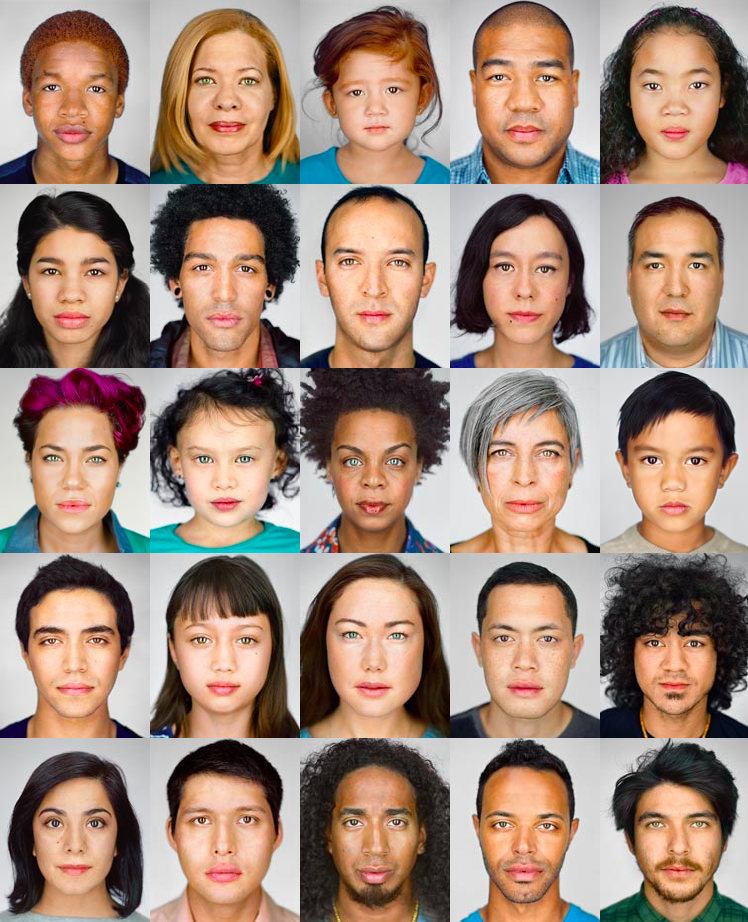 By Gabrielle. Portraits by Martin Schoeller for National Geographic.

Last year, I was at the Mom 2.0 conference, and Karen Walrond (you might know her as Chookooloonks), and I had a discussion about how she felt about the term “black”. She said she prefers it, because she’s not from Africa and doesn’t identify as an African-American. She would be fine being called Caribbean-American because she grew up in Trinidad, but Caribbean-American doesn’t seem to be a common usage term.

I was thinking of that conversation as I filled out a survey from our school district this week. The survey asked what race or ethnicity my children identified as. And since we live in Oakland, and since Oakland is unusually diverse, there were like 20 options to choose from, or you could fill in your own. I checked the “white” box.

Checking that box reminded me of a conversation my high schoolers had with me not long after we moved here. When we registered, we learned the high school was 10% white, and wondered if our kids would stand out for their whiteness. After a few weeks, our kids said their classmates were curious, but it wasn’t about our kids’ whiteness, it was because they aren’t some sort of combo. Apparently, much of the student body at the high school identifies as multi-cultural or dual-race. Their friends and classmates are Chinese+German, or Filipino+Mexican, or Vietnamese+Arabic, or African-American+Balinese. Our kids felt boring being white+white.

My kids asked if we were really just white and I felt apologetic. Hah! I told them my dad’s side is Jewish, and reminded them my older brother is a Navajo. I asked them if that helped, but no, that didn’t really change things. So I went back further. I told them their ancestors came from Scotland and Sweden, from England and Germany. But no, that didn’t help either. At the end of the day, they still felt like white+white.

Something about it feels like progress to me — I mean them feeling out of the ordinary being white+white. It hints at a future where everyone is so mixed together that we get to choose what culture we want to identify with, which culture we want to celebrate, instead of having it, and all of its baggage, assigned to us at birth. It also aligns with what my kids have been taught in their high school biology classes: there is no such thing as race at a biological level. It doesn’t exist except in our heads. It reminds me of the National Geographic article about the changing faces of America.

Thinking about this also reminds me of how much America really is a melting pot. When I lived in Normandy, my local friends simply identified as French. But here, almost anyone I talk to identifies as an American, plus also as some additional ancestry.

And now I’m curious. Do you identify with a particular culture or race or ethnicity? What box do you mark when you’re surveyed? Or, if you don’t live in America, are you ever asked to mark a race/ethnicity box? Do you ever get mistaken for being a race or nationality that you are not? How about your kids? Do they identify differently than you do? And if you’re black and live here in the U.S., but grew up in a non-African country, how often are you called African-American by mistake? Or do you not read it as a mistake and think of the term African-American in another way?

P.S. — I’m unclear on how to make it happen, but I would LOVE to have more diversity among the Call It A Day and Growing A Family and Living With Kids series here on Design Mom. Whatever your race or ethnicity or nationality, I hope you will feel welcome to share your stories here! We want to hear your voices! It would be amazing if this blog reflected the very diverse community I see around me every day.