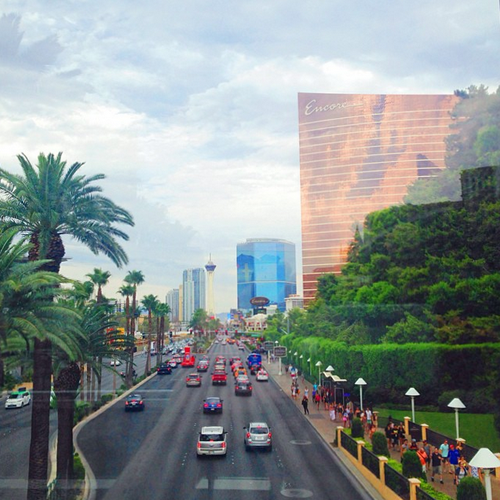 Waving hello from Las Vegas! We’re staying at the Golden Nugget — it’s in the old school downtown part of the city. And we’re having a fabulous time!

I have such nostalgic feelings for Las Vegas. Growing up in St. George, Utah, meant Vegas was our nearest big city. St. George has grown like crazy in the years since I left for college, but while I was a kid, it was a small town. So when we needed Costco, or a mall for school shopping, we drove to Las Vegas. My first concert was in Las Vegas. And the Las Vegas airport is the one I would fly in and out of.

We didn’t spend a ton of time in the casinos, but we’d drive by all the neon with wide eyes. And I remember a family vacation where we stayed at a hotel/casino called The Imperial Palace.

The Fashion Show Mall would also draw us to Las Vegas Boulevard, fondly known as The Strip. That mall had expensive stores like Neiman Marcus and Saks Fifth Avenue. We couldn’t afford those stores, but my mom would make a point of having me window shop there so I could see the current styles — those window shopping trips were part of my early design education.

I also came to understand that gambling was infused into life in Las Vegas — that even in the suburbs, there were slot machines everywhere — in the grocery stores and the pharmacies and every possible spot.

I remember the Vegas skyline changing when I was in my teens. I remember the Luxor pyramid being built, and the Mirage and the MGM Grand. But the next big growth spurt — the Bellagio and the Venitian — happened after I’d moved away from St. George. The whole strip has continued to develop like crazy and when I’m in Las Vegas I no longer feel oriented. The suburbs have also grown like crazy and it’s easy to imagine that most residents of the Las Vegas area probably rarely interact with the touristy, casino part of the city.

My kids haven’t ever really been to Las Vegas. Since my hometown is so close, we usually just drive through on our way to see cousins. But we thought on this roadtrip is would be a good destination. Vegas feels very American. Lots of neon and shopping and commercialism. A contrast to the very natural National Parks, and something fun for our exchange students to see. This is also the main spot on our trip where they’ll be able to shop.

Vegas is contrasts. The shopping is as good as the biggest cities in the world — I think I counted 6 Louis Vuitton shops over about a mile of the Las Vegas Strip. Hah! The newest growth spurt brought in fine dining, and luxe spas. Of course, the city has always been known for great concerts and performers. There are even world class art exhibits now. And all of that shares real estate with endless, dark, smoke-filled casinos and the trashiest shows you can find anywhere. In the same brochure where you can get info on Seigfried and Roy, you can also find tours to the Grand Canyon. Much of the city is for adults only, but at the same time, there are a surprising number of attractions designed to attract families with young kids.

Our hotel is on Fremont Street. Sassy Sally and Vegas Vic of my childhood are now part of a walking district. There is a roof over the whole street making it a semi-indoor space, and the entire ceiling functions as a giant screen. The whole outdoor walking area is air conditioned! I mentioned Vegas not being eco-friendly on Instagram and there were comments that Vegas has actually done a ton with water recycling — which I was comforted to know! But when you’re in this desert oasis, surrounded by a million light bulbs and outdoor air conditioning, it’s hard not to wonder how much energy it takes to power this crazy place. (No judgment from me, I promise. I can’t pretend I’m awesome at being earth-minded. I’m a tourist here just like everybody else.)

Our hotel, The Golden Nugget, has a real live gold nugget on display. The biggest ever found. From Australia. But it’s not much of a draw. Instead the pool is the thing. First, because it’s super hot out and cool water feels amazing. And second, because the pool surrounds a salt water aquarium full of sharks. But that’s not all. There’s a water slide at the pool and it goes through the shark tank!

We were laughing with the kids and wondering what it would be like to be part of a Vegas hotel/casino planning team, trying to come up with more and more jaw-dropping attractions. We imagined a conversation like this: This pool is pretty nice, but it needs something more. Hmmm. How about a giant aquarium that you can see when you swim? Wait. How about a giant aquarium full of sharks?! And what if there’s a water slide that goes by the shark tank? No. Even better: What if the water slide goes through the shark tank?! Bingo!

Las Vegas is a city where creativity and talent abound. And at the same time, everything gross about our country is present there and in full view. But one thing that I observed on this trip: Everyone in Las Vegas seems like they’re in a good mood! There are no desks in the Golden Nugget hotel rooms. No one comes here to work. Vegas is all about play.

Have you ever been to Las Vegas? Have you ever been there with kids? What are your favorite spots in the city, or favorite attractions? And whether you’ve been there or not, I’d love to hear about your impressions of the city. I think it’s so much fun! But I can only handle a couple of days and then I’m ready for something a little less neon. : )

P.S. — When we lived in New York, our neighbors would be wowed when they heard we were flying into Vegas (on our way to a family reunion). To them, Vegas was the coolest possible destination. Is that how you think of it, too?