This is just a little thing, and maybe it’s not particularly French, but one thing we noticed after living her for about a year, was that our traveling French friends always send us postcards during their trips. It seems to be part of their vacationing habits or traditions. And of course, it’s totally charming! 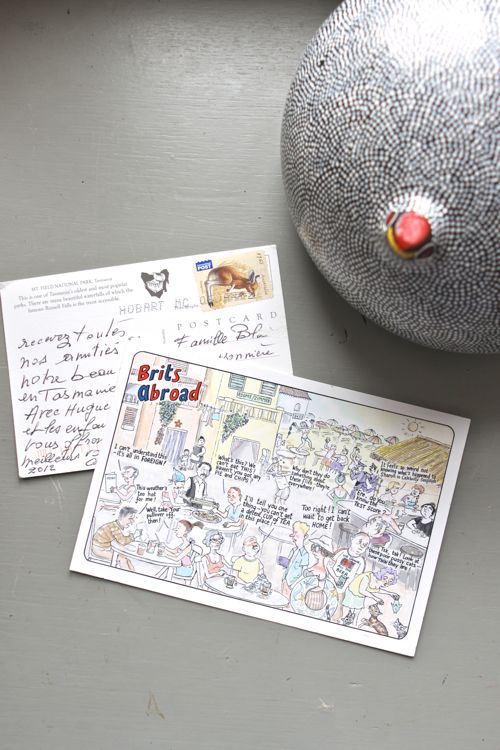 Postcards from Australia. From England. From Spain. And when I traveled with Caroline to New York, one of the first things she wanted to do was send postcards home to her family and friends back in France. We’ve received more postcards in our time here than we did in our last 15 years in the U.S.

I’m not totally sure why the postcard tradition surprised me. I suppose it’s because I rarely if ever receive postcards from my American friends. When I think of why Americans don’t send postcards very often, I imagine it’s partly because when Americans vacation, they often take short trips — typically less than a week — which isn’t really enough time for a postcard to reach home while you’re away. And I’m sure it also has to do with texting and Facebook and Instagram and all the modern ways we stay in touch — making checking in with postcards less necessary.

But from what I can tell, the French seem to take their vacations really seriously and stay at their destination for a couple of weeks, or even longer if they’ve traveled across the world to reach their destination. So sending a postcard makes perfect sense.

How about you? Have you sent or received a postcard lately? And have you ever taken a long vacation? Or do you squeeze them in over an extended weekend?

P.S. — Even though we don’t send them, it’s not unusual for my family to buy postcards when we’re traveling — especially at art museums. They make great souvenirs and additions to scrapbooks and journals.