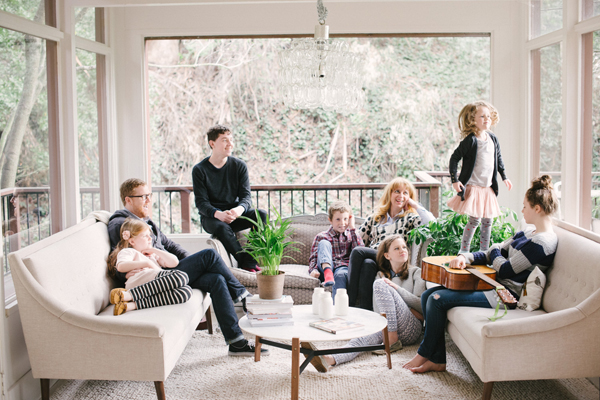 You want another baby but your husband or partner doesn’t? You’re not alone. Kate, a Design Mom reader, emailed me a few days ago with this question: How did you and Ben Blair decide how many kids to have? I am particularly curious because my husband and I are currently in (thankfully not contentious) disagreement about whether or not to want another baby.  —  Kate

That’s a big question. And I could feel my heart pound as I read it, because it’s a tough situation, and so personal. Plus, I know it’s not uncommon.

Or maybe you were both in agreement and thought you wanted a huge family. Seven or eight kids! Or more! But then you had a baby, and realized it was different or harder or just not what you hoped parenting would be, and suddenly that picture of huge family doesn’t seem appealing to you after all. But your partner? They are still into the whole huge family thing.

Or maybe the two of you knew it was always going to be 2 kids. But then you got pregnant, and pregnancy was so miserable that you just can’t bear to go through it again. And now you’re wondering: Do you adopt? Stick with one? And will you feel guilty forevermore that you didn’t want to endure another pregnancy?

Or maybe as a couple you were picturing one wonderful baby. An only child that you could give all your attention to. And then, no baby came. Infertility became your nightmare. And one of you wants to move on into a childless life, while the other wants to keep trying to grow a family with IVF or adoption or any possible option.

No doubt there are an infinite number of other scenarios. It’s such a BIG decision, and can feel so weighty.

In our case, Ben Blair and I both came from big families. Eight siblings each. Four girls, four boys. And we knew from the beginning we wanted a big family. But what does a big family mean? Three kids? Five kids? Ten kids?

We didn’t have a particular number in mind, but I can tell you I didn’t really consider any number higher than 8 kids. Before I even got started that seemed to be my mental max. Then, we started having babies. Ralph was an easy baby so we had Maude right away — they’re 18 months apart. Maude was an easy baby too, but having two little ones so close together was challenging, so we waited a bit longer to have Olive. Between Olive and Maude was 2.5 years.

After Olive I had a big post-partum depression. I didn’t think I was done having babies, but I needed a longer break. So the next baby, Oscar, was born 3.5 years after Olive. But I didn’t totally love that big break; it was needed, but I found it hard to get back into the baby stage when my youngest was already 3 and 1/2 years old. So I got pregnant with Betty right away. Oscar and Betty are only 16 months apart.

But. I should note, that though he’s turned into my total sweetheart, Oscar was our most challenging baby. We had a lot of parenting experience by the time he came, and he didn’t stress us out, but we remember talking about how if Oscar had been our first baby, and we thought that’s how tough all babies are, then maybe we wouldn’t have so many of them. (I mention that because it totally could have changed our vision of a big family.)

So now we had 5 babies. And we wondered if we were complete. We weren’t ready to close the door on more babies, but we weren’t in a hurry to have any more. So for a few years, we just parented the 5 we had and didn’t really think about what was next. For reference, I started Design Mom two months after Betty was born.

And then, when Betty turned 3, and I realized she was out of the baby stage, and there were no more babies currently on the schedule, I had to do some soul searching. Were we done? Should we have more? Ben was feeling like we could be done. I was feeling like we could be done, but if we were, then I would be somewhat heartbroken, because I hadn’t known that Betty was our last and I hadn’t paid attention in the way I would have wanted to. In fact, Betty and Oscar were so close together, and our jobs were in such flux when they arrived, that much of that time in our life was a big blur.

So we talked and talked. I told Ben I could get over it, and be done with babies, but I would probably need to do some mourning. And Ben felt like he wasn’t totally closed to the idea of another baby, but that he’d wasn’t feeling enthusiastic about it. I knew I couldn’t bring another baby to our family unless Ben Blair was completely on board, because we are a team, and I don’t even pretend I can do this without him. There were more discussions and lots of prayers. And then we decided: one more baby.

Betty and Flora June are almost exactly 4 years apart. And knowing June was our last, I ate up every second of her babyhood.

So do I have advice to give? It’s so personal, that I don’t even dare. But I can say two things: 1) Our “baby” is coming up on her 7th birthday this year. So it seems like a long time ago, but I can tell you, if Ben Blair hadn’t decided he was 100% on board, we wouldn’t have had June. We would have stopped at 5 kids. And I would have mourned and been sad for some amount of time, and then moved on.

And 2) I can also tell you, that even though I knew we were done, the baby cravings didn’t go away (they still haven’t!). So that’s tricky too.

Well. That turned into a long post. Now I’d love your thoughts. How did you decide how many kids to have? And did you experience any kind of disconnect with your partner about what the number should be? Did one of you have stronger opinions about it than the other? How did or do  you work things out when you want another baby? Do you feel like you had fewer kids than you wanted? What advice would you give Kate if she asked you the same question?

128 thoughts on “I Want Another Baby – What if Your Partner Wants Fewer Kids Than You?”