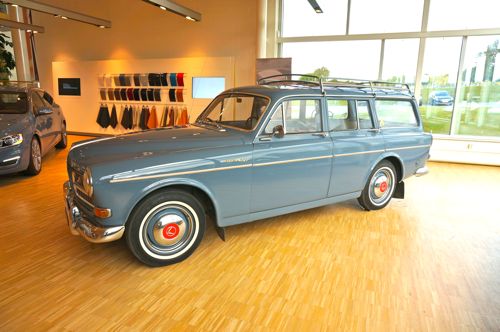 As part of my agreement related to this Sweden trip, I was asked to include the hashtag #inavolvo as I document our trip. A separate blog post about Volvo was not part of the agreement. So this post is not a sponsored post. But I wanted to write about what I learned at Volvo factory because I think you’ll find it interesting. I certainly did.

The Volvo factory is just outside of Gothenburg, and part of our itinerary included a visit to the facility to attend a safety demonstration and get the scoop on the Overseas Delivery Program. This program is pure genius and whoever figured it out wins the prize for… I don’t know, being a genius.

Basically, it’s this: If you live in the United States or Canada and you buy a new Volvo, you’ll get airfare for two to Sweden, plus a night in the Radisson Blu in Gothenburg (a lovely hotel, I included a photo of it at the bottom).

Why? For several reasons (free trip to Europe!), but the main one is that it actually brings down the price of the car. For reals. As a customer, you buy the car from your local U.S. Volvo dealer, then you come to Sweden, pick up the car from the factory, drive it around the countryside, or maybe take a side trip north to Norway. Then, you drop it off at the factory again, and they deliver it at no charge to your U.S. dealer. By doing this, it allows the car to be brought to the U.S. as “used” instead of “new” and the import tax is lower. Which, like I said, brings down the overall cost of the car.

So in a nutshell, if you’re buying a Volvo, taking a free trip to Sweden will get you the best price! 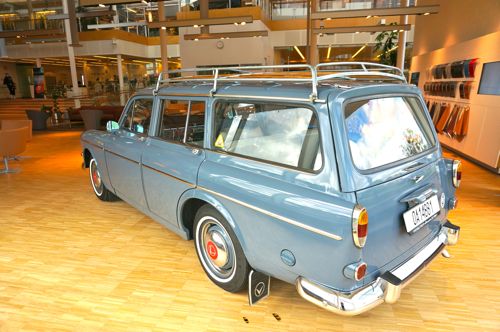 While we were at the factory, we met three couples from the U.S. who were all taking part in this Overseas Delivery program. One of the couples was taking part for the 5th time! The program has been going on for about a dozen years, and apparently there’s at least one couple who buys a Volvo every year, and then spends the summer touring Europe. Hah!

Of course, I asked a million questions. The first of which was: So, why doesn’t every Volvo customer participate in this program? And the answer was three-fold. One, not everyone enjoys traveling. Two, sometimes a customer wants to buy something off the lot because they need a car in a hurry (ordering a car through the Overseas Delivery program is a 2 to 3 month process). And three, not every dealer participates, so not every customer knows about the program — but you can find the nearest participating dealer here.

Other things I learned about the program from Volvo reps and from the couples who were participating:

When you pick up the car, it has a temporary license plate and temporary insurance. The insurance is good for two weeks, or you can increase it up to 3 months for an additional fee. The license plate is good for 3 months at no extra cost. What that means is that you don’t have to keep the trip to 24 hours, you can travel around while you’re there — for a few days, two weeks, or even up to 3 months! Related, many European countries have visitor visas that expire after 3 months, so this timing matches that.

The couples we spoke to were all making an extended trip out of it — the trip of a lifetime for one of the couples: three weeks all over Scandinavia. Gothenburg, Stockholm, Copenhagen, Finland, Oslo, Bergen and the fjords! This is all totally drivable.

Another couple was driving the car south to France and Spain. They are going to drop it off in France after their travels are done. Then, the Volvo dealership will send it back to Gothenburg (for a fee) and it will be shipped at no cost to their U.S. dealer.

So basically, you can use the free airfare and turn this into a European dream vacation if you’re so inclined.

On the other hand, if you simply want the better price, you can make the trip as short as possible and drive around Gothenburg for a bit, then hand the car back over to the factory for delivery. 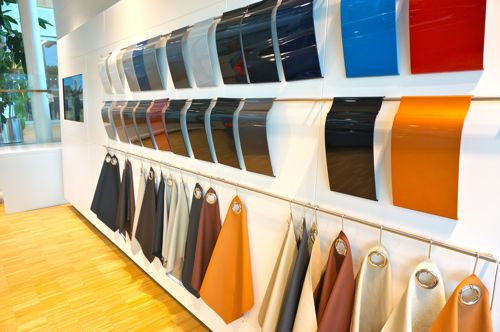 Another thing I learned is that by ordering a car through this program, you can specify exactly what you want. Make, model, color, upholstery, add-ons, accessories — you get to build your ideal Volvo. This appeals to me for obvious reasons.

Okay. So I’m obviously fascinated by the Overseas Delivery program. But as I mentioned, I also attended a Volvo safety demonstration. I wasn’t expecting to get much out of it, but Ben Blair and I have since discussed it at least twice a day since we attended. 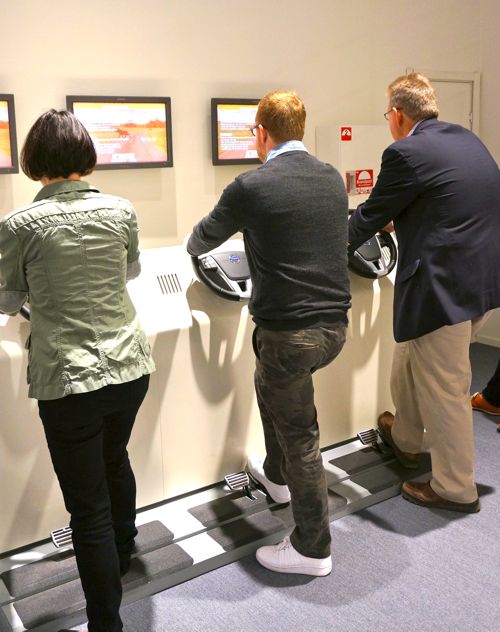 First we talked about the importance of safety, and what happens to the weight and impact of humans, pets and objects in a car during a wreck. Then, three volunteers got to test their speed reflexes — Ben Blair’s were the fastest (of course). I already associated Volvo with safety, but just assumed it was their marketing tactic. I didn’t understand it was the company’s core guiding value, and the number one thing they’ve focused on from the beginning. They take safety super seriously.

They invented the 3-point harness, then, when they saw how effective it was, quickly made it available to all car manufacturers. And to this day, it’s the safety innovation that saves the most lives. But they didn’t stop at an improved safety belt.

Every time there’s a serious accident here in Sweden that involves a Volvo, their engineers go to the scene. They study and document the wreck, then they recreate the same crash in their massive safety labs so they can figure out how they might lessen the impact to the people inside the cars. They don’t just sort-of recreate the crash. Their machinery allows them to stage a wreck inside the lab from any angle or point of impact. It’s truly amazing.

My brain doesn’t work like that. Like everyone, I know serious car wrecks happen every day, and I just assume it’s part of the gamble of life. I hear about safety improvements in car advertisements, and shrug and think they don’t really change the overall safety statistics. I accept that cars are dangerous, and try to block out the worst case scenarios from my mind. 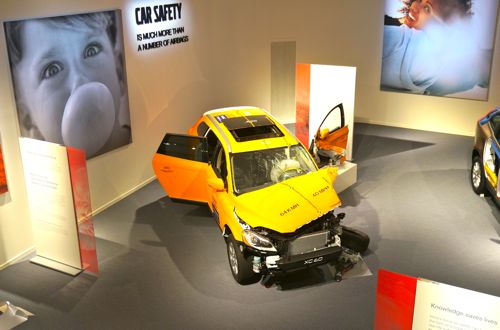 But Volvo engineers’ brains are different than mine. Like me, they know car crashes are going to happen, so they figure out every possible way to either prevent them, or lessen their impact. They take what they’ve learned from studying real-life wrecks and make improvements. Real improvements. A decade or so ago, 10% of car crashes involving a Volvo resulted in major injury or death to the people in the car. Then, they made more safety improvements, and brought the number down to 4%. Then, they made more safety improvements, and at this point, they’ve brought that number down to 2%. Those numbers represent real people and real lives that are being saved.

Their current goal is to bring the number to 0% by 2020. And based on their track record, I have no doubt they’ll reach it. Just think: By 2020, if you are driving a Volvo and get in a serious accident, there will be 0% chance that you will receive a serious injury. Zero percent chance that you will die. I’m stunned by that thought.

And that’s what Ben and I have been discussing. We don’t own a Volvo. We’ve never owned a Volvo. There isn’t actually a Volvo that seats 8 people, so we’ve never even considered it. But suddenly, we were feeling irresponsible for driving around our kids in anything but a Volvo. Or what about teen drivers who are particularly at risk for car wrecks? We have two teenagers, both working toward their drivers licenses — if we could reduce their chance of being seriously hurt in a car crash to 2 percent, why wouldn’t we do that?

Of course, that brought up bigger questions like: should safety features this good be required by law for all new vehicles? And even though these safer cars are more expensive to make, do they ultimately save money for a country because of fewer catastrophic injuries and related medical care? Would safer cars mean less car insurance and far fewer associated legal battles? Should governments subsidize the purchase of safer cars to make them available to all income levels?

Obviously, these are big questions, and I don’t pretend to have the answers, but as you can imagine, we have been discussing this topic repeatedly since the safety demonstration, and I’m sure we’ll be discussing it for weeks and months to come. 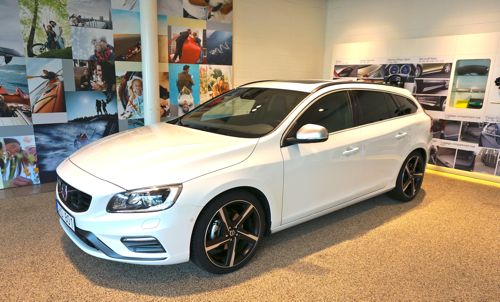 As we finished up at Volvo, the last step was to pick up a car that we could drive up the coast. The car they loaned us for the week is a V-60 R-Design. It has sporty details and smart features — like it shows you on the dashboard what the speed limit is on whatever road you’re driving, and the number changes instantly whenever the speed limit changes. It’s both good-looking and highly functional — exactly what I expect from Swedish design.

We love it and we feel safe as we drive on these new-to-us roads. If you’re following along on Instagram, you may have seen  a peek of it. It certainly feels like the ideal car to be driving around Sweden, where something like one in every 7 vehicles is a Volvo. : ) 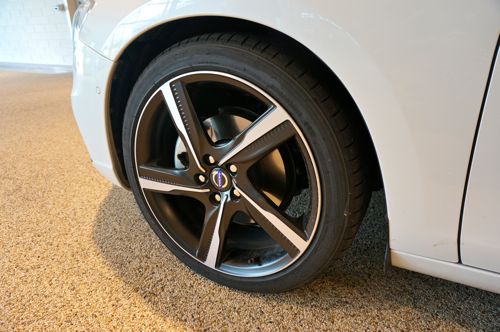 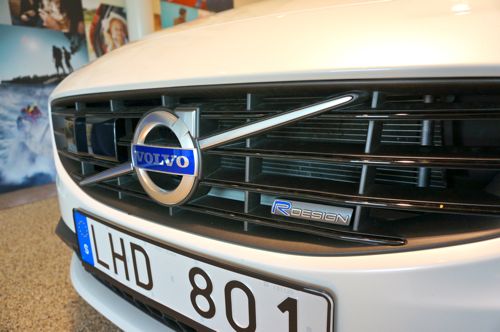 I know I covered quite a bit in this post, but I’d love your thoughts on any of it. What do you think of the Overseas Delivery program? Does it get your European vacation imagination going? And what are your thoughts on the 0% serious injury goal? I’d love to discuss either with you!

P.S. — Related to that 0% goal, in the next 3 years, there will be 100 self-driving cars in the streets of Gothenburg. These will be customer cars, not test cars. Wow! 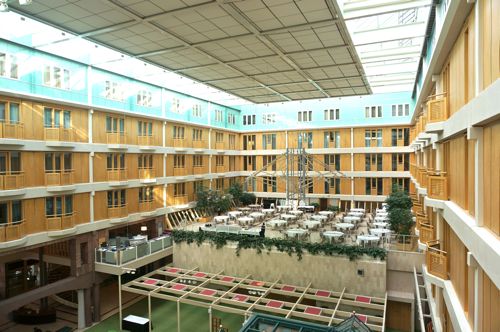