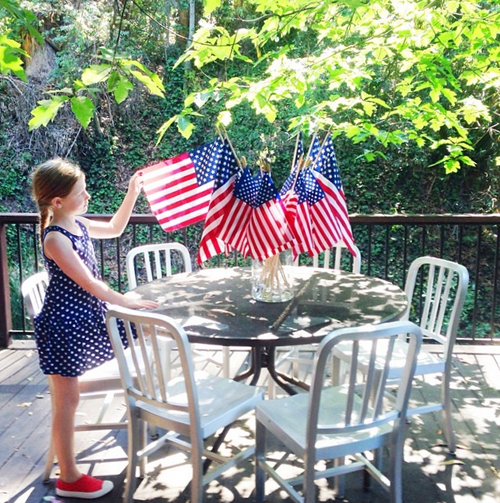 Well it’s night time now. Almost 8:00 in California. Almost 11:00 in New York. What a day. This is the first time I’ve logged on to Design Mom at all. It’s been rough. I let off steam today by making a lot of obnoxious comments on Facebook. Probably not the wisest decision.

And then the other of half of the country is in mourning today. But again, maybe only a portion of that half. Because there were so many reluctant Clinton voters too.

Personally, I’m going through the prescribed stages of grief, with the hopeful goal of acceptance, then forward movement. I’m not there yet. I think it may take awhile.

I’m still processing everything. I think everybody is. I don’t know how I will feel tomorrow, but this is what is bothering me so much right now:

– The real fear so many people in our country are feeling because of this outcome. Our President-elect has made specific and/or veiled threats against Muslims, and Immigrants, and People of Color, and the LGBTQ community, and Jews, and Women and the Disabled. His supporters (no, not all his supporters) are already acting on those threats and many, many people feel unsafe and unwanted.

If You Aren’t Aching.
Documented hate crime happening in response to Trump’s win.
America is a Country that Belongs to White People.
America Hates Women.
Kids in Utah (not sure if this one is public).

– Trump supporters are upset that they are being called racist and bigoted and sexist. They insist that they are not. Which is understandable. No one wants to be thought of as racist or bigoted or sexist, and very few people try to be those things. But remember, if we know about an evil thing, like a friend posting awful memes about Muslims on Facebook, or memes calling Michelle Obama a gorilla, and we don’t do or say anything to combat it, then that makes us complicit in the evil. That’s why Trump supporters — even when they aren’t KKK members themselves — are being called racist. Trump is racist. And if we are supporting him or being silent about him instead of fighting against him, then we are complicit in his racism. Which means we are racist.

Can Trump supporters do anything to change that perception? Sure. Actively fight racism. You could support Black Lives Matter, or other pro-minority groups, with time or money or your voice. You could seek out businesses owned by women of color and purchase from them. Those examples of hate I listed above? You could watch for them in real life and shut that stuff down. You could make your children aware of them so that they look out for behavior like this at school and make sure it’s called out.

Live in a mostly white area? Don’t know many people of color? Then you could make sure your social media feeds have plenty of non-white people in them. I mean it. Seek out Instagrammers of every race. Lots of them. Follow Black and Hispanic thought leaders on Facebook. If you haven’t done this already, you will be surprised to see how much it changes your point of view as you start to see the world from more perspectives.

– I’m seeing lots of calls from Trump supporters to come together, to get past the election, to do what we can to support our new President, so that he can do his best for the country, to work together as one. I get the desire behind these calls, and I know it comes from a good place. But if you’re tempted to post a kum-ba-yah, you may want to wait a bit. A) It’s probably too soon — the mourning and fear are real. Plus B) there’s a big dose of bitterness. Bitterness that’s not without justification.

Fans of Obama have watched people on the right say horribly demeaning things about his family for 8 years. And they’ve watched a Republican House and Senate that have been unwilling to work with Obama too — even going so far as to shut down the government, and refusing to consider his moderate suggestion for a Supreme Court nominee. So the calls to come together and stop making personal attacks? They don’t necessarily come across as very sincere. The thinking is something like, why should democrats play nice if republicans weren’t willing to?

But what if you really are sincere? And you really do want to see the country come together? Okay, then how about prefacing any lecture you’re about to make, by being honest about the awful things your side has done. (And yes, I know both sides have done awful things. But we have to take responsibility for our own actions — or our own sides actions — before we worry about what anyone else has done.)

– Sometimes it seems like it’s just people in cities that are fighting about political stuff. I’ve been thinking about that since watching the votes come in last night and then again after I read this article. I kept noticing it in my life today. The people I’m arguing with on Facebook? I know them. They live in cities. The Trump supporters I know personally? They live in cities. And I know from my analytics that most of the people who read here, both democrat and republican, live in cities. Do our citizens that don’t live in the city even feel like they are getting to participate in these online conversations, or is it too much of a different world?

If you are reading and you live in a rural area or a small town, do you feel like your voice is being heard? That the needs of your communities are being acknowledged?

In the book What Technology Wants, which I was obsessed with over the summer, it talked a lot about people all over the world streaming into cities because that’s where opportunity is. If that’s true, then what happens to a big country like ours, with big cities on the edges and no where else?

– You’ll notice I’m making requests of the Trump supporters, but not really of the Hillary supporters. Can you guess why?

If you supported Trump, then you are the winners. And with great power comes great responsibility. The winners have the upper hand, and they have to be the bigger man (or woman). Trump supporters have control of the House, the Senate and now the Presidency. Which means you’ve got work to do. And if you’re sincere about wanting the country to come together, then it’s up to you to make it happen. You’re in the lead. It’s on your shoulders.

How will you do it? I’m not sure. But I can bet it won’t involve reading Breitbart or the Drudge Report or watching Fox News or Ann Coulter or Savage Nation, or listening to Rush Limbaugh. That stuff is poison. It does more to keep the country divided than almost anything else I can think of. If you partake of it regularly, I urge you to try an experiment. Go cold turkey off of it for a few weeks. Use something like the BBC or any standard mainstream outlets (right or left leaning) like WSJ, Weekly Standard, Forbes, National Review, NY Times, Washington Post and NPR.

I know that “mainstream media” is often maligned as if they are evil, and certainly they are not perfect. But if most Americans were still getting our news only from these types of mainstream media outlets, I think we would be better off. I really think the extreme stuff is poison.

With the poisonous stuff gone, I can tell you I was amazed at how great our country is! I don’t actually hate a lot of the people I been told to hate! It turns out talking about gun reform doesn’t mean someone is trying to take our guns! And that both sides want to protect our religious freedoms! That there is no Gay Agenda or Feminist Agenda other than being treated like equal human beings! It will be a relief, I promise. At least it was for me.

I’ve done this myself in my own life, and it works. It really does. Less knots in my stomach about the world in general, and more likelihood that I can see the perspective of the other side. And yes, I know there are ultra-left news sources too, but they are not as plentiful or powerful as the ultra-conservative ones. They don’t compare. But by all means, if you encounter one, stay away. It’s not about avoiding different points of view, it’s about steering clear of the extreme stuff.

The extreme outlets are not going to encourage anyone to come together. They can only thrive with an enemy.

– Here are two happier things today. A little bit ago, as I was starting to sign off, I began to see some humor. Oh my. I was so relieved to crack a smile! I hope you are finding something to smile at too. And then, just now, as I was typing this, my lovely sis-in-law, Liz, dropped off a bag of Pear Jelly Bellys on my doorstep. They are my favorite. I haven’t eaten a thing all day, and they are bringing me joy. (Thank you, Liz!)

So that is some of what I’ve seen today. And I’m curious what you’ve seen from your internet perches (and real-life perches) as well. Fill me in. Do you agree with any of my thoughts? Or do I have it all wrong? How did you celebrate/grieve today? Are you finding it hard to be a gracious winner or gracious loser? What do your kids think about it? Are they fearful? Or feeling triumphant? Did they talk about it in school today? Oh. And if you haven’t quit me yet. I’m planning to get on Facebook Live tomorrow. Join me (and get more info on my silver hair!).

P.S. — Here in Oakland, students at most of the high schools staged walk outs today in protest of Trump. Reading about it, I was reminded I live in a very blue bubble. I mean I know that. I grew up in a very red bubble and can certainly see the difference. But I’m sure I forget sometimes. Here’s to bursting all of our bubbles.