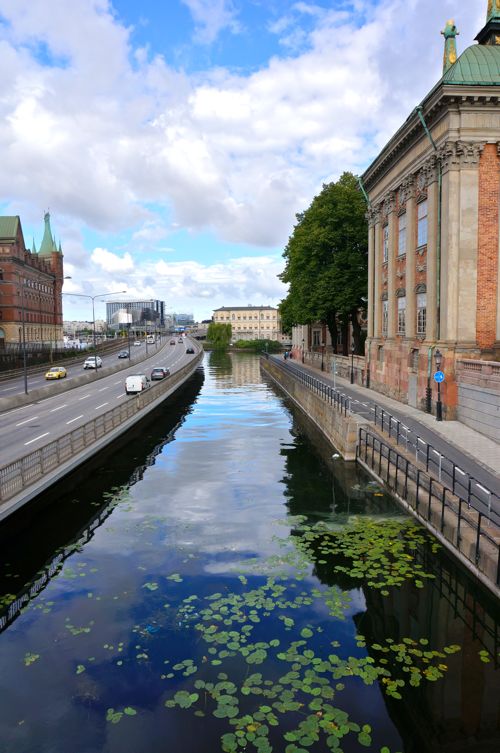 We packed a ton into our Day Two Stockholm itinerary (see Day One here). And we loved it! There’s just so much to see. We started by meeting a tour guide, found via Visit Stockholm, at the hotel first thing in the morning. Her name is Elisabeth Daude and she’s a total Stockholm expert. 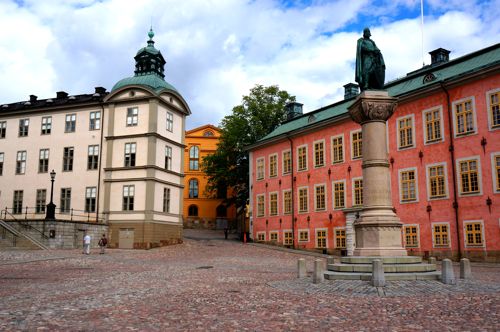 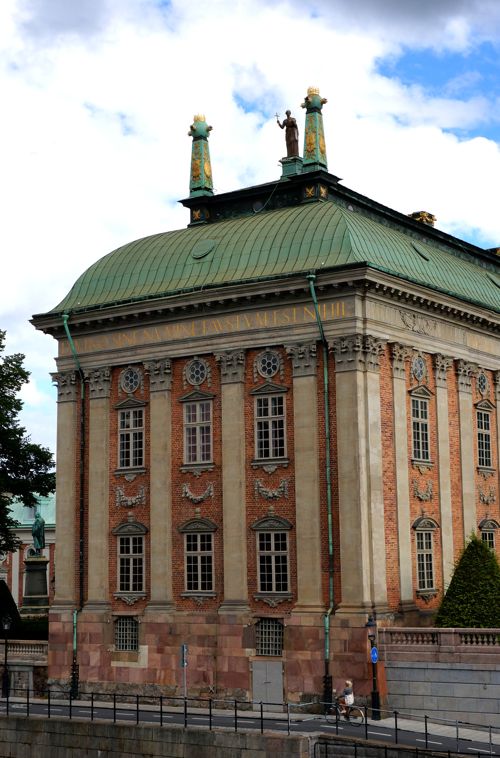 The first stop on our tour was a visit to the lake front to see the old palaces, and the building where the noble families historically met. We had a fun discussion about the roles royalty and nobility play in current Swedish political and social life.

Which reminds me, my favorite thing about tour guides is getting to ask a local all the million questions I have about the country’s culture and customs. With Elisabeth, we discussed two aspects of Swedish culture that I’ve been thinking about like crazy since our conversation — I’ll mention them at the bottom of the post so that I don’t get too distracted before I write up our itinerary. 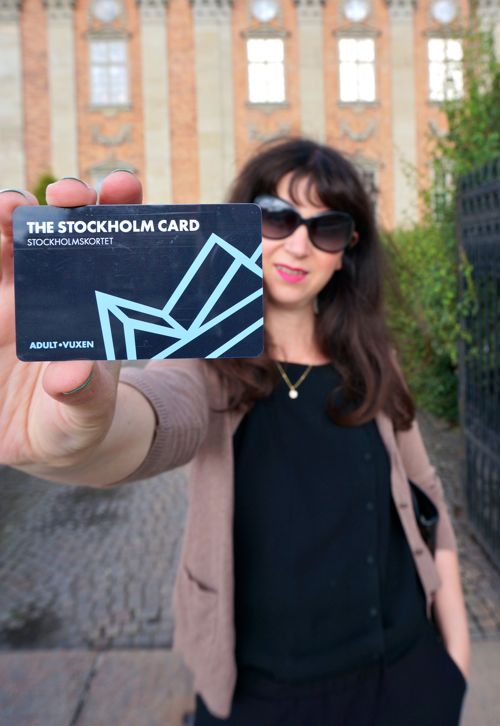 We used the Stockholm Card to get around on the city buses — it includes access to all public transportation and most museums and attractions. A super good deal for tourists.

Since we had seen some of the town center the day before, Elisabeth took us to the South Island — it’s a residential area that we probably wouldn’t have visited on our own, and it’s super cool! It has that in-the-process-of-being-regenetrified hipster feel, with lots of second hand stores and vintage furniture shops and restaurants that celebrate local producers — old school Swedish food made new and fresh again. It’s called the SOFO neighborhood. Our favorite stops: 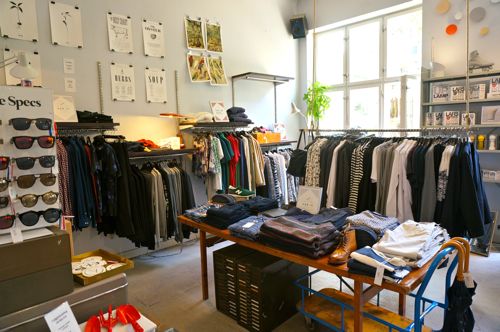 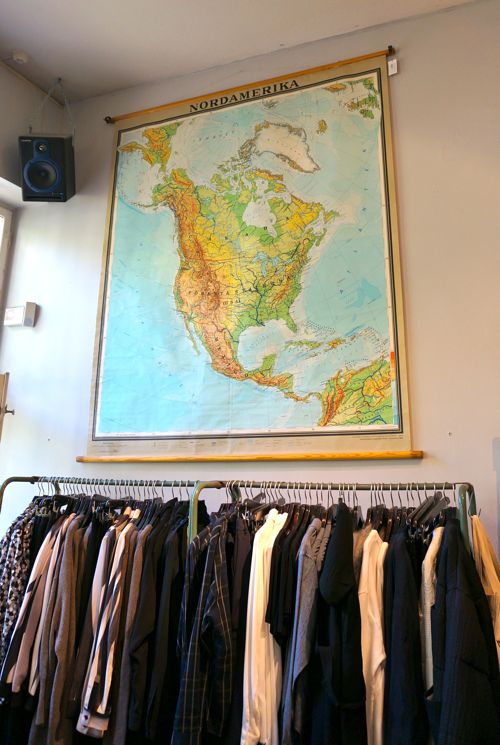 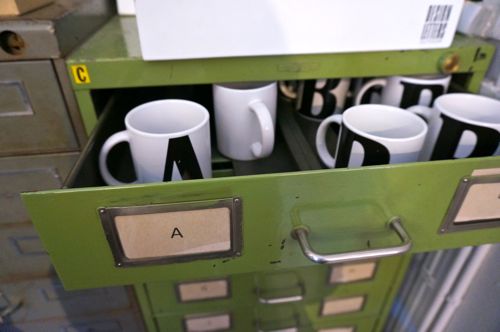 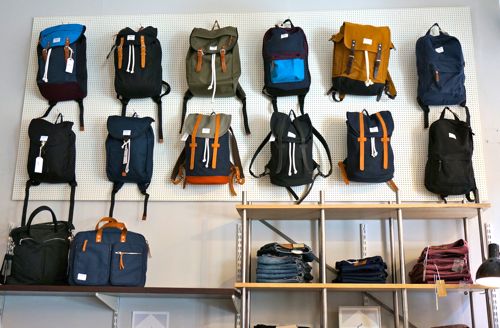 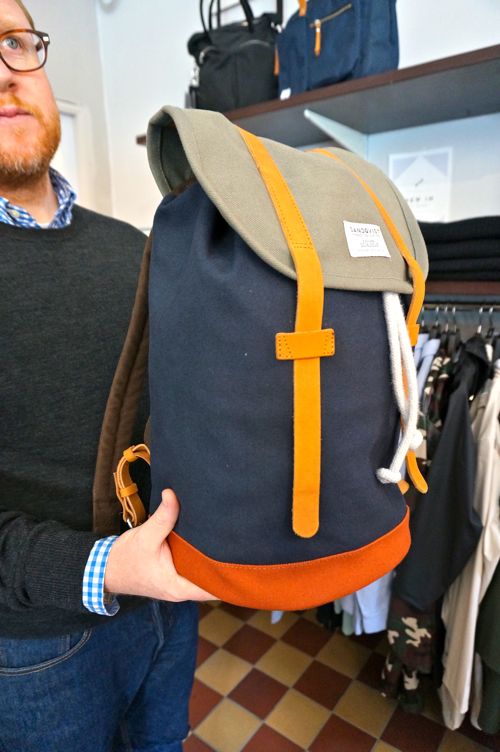 There was a wall of classic canvas backpacks by Sandqvist. They are stunning. Leather details, super sturdy and well made. Plus, they are designed and built in Stockholm! We bought one for a souvenir — and are using it to hold the other souvenirs we pick up. : ) 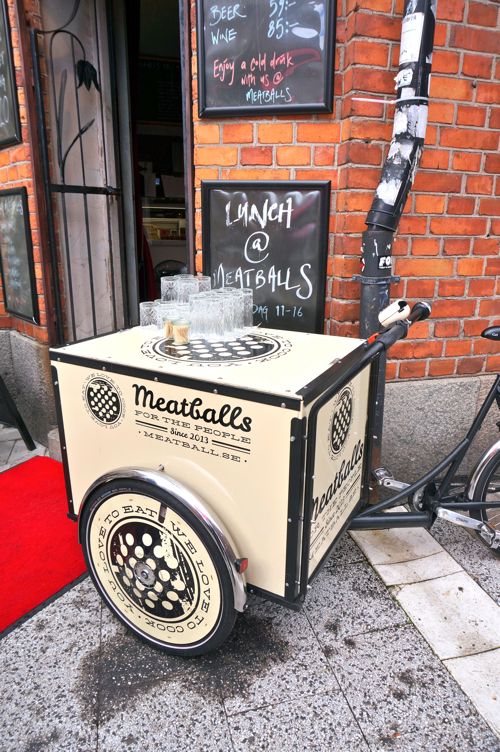 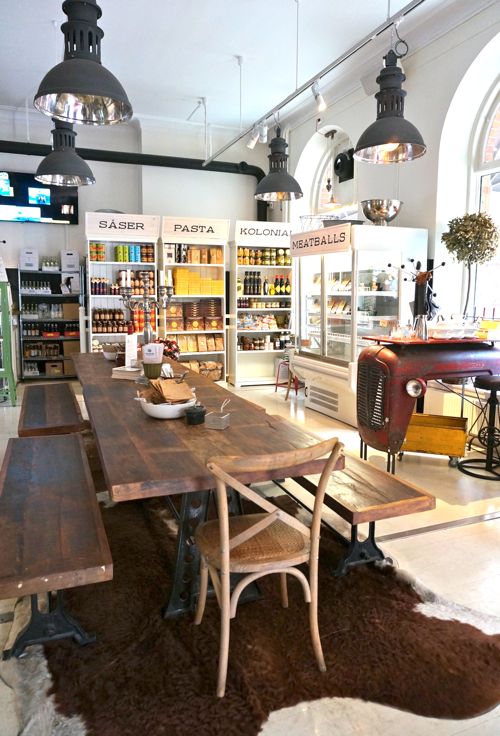 Meatballs for the People. There’s nothing more iconic than meatballs as far as Swedish food goes. They have a cart for deliveries, family style eating in the restaurant, and take home options as well. The meatballs are made simply, using local ingredients, and there’s a map that shows where in Sweden the different meats come from. (And yes, they have veggie meatball options as well!) 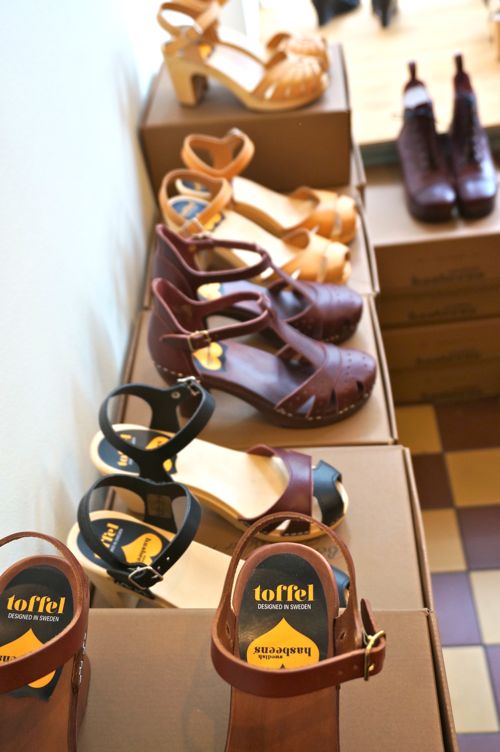 Swedish Hasbeens. These gorgeous wooden+leather clogs and sandals have been on my wishlist for ages. But the high quality and high design means they’re quite pricey. So when we happened on a store in SOFO having a 50% off sale, you can imagine I couldn’t resist. I bought a red pair and can’t wait to show you! 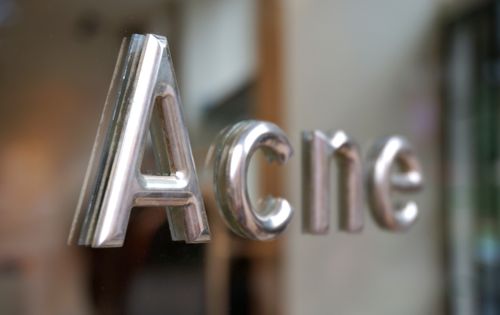 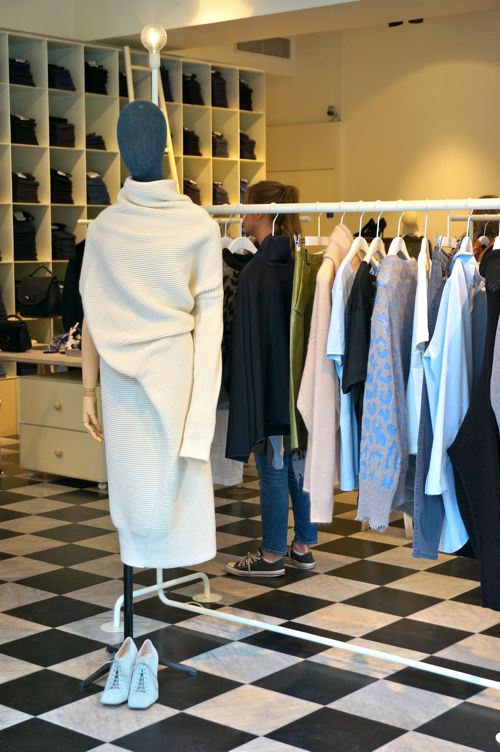 Acne Studios. A modern, sometimes experimental/edgy Swedish style brand. This Swedish line has grown and there are now stores across Europe and even two in the U.S.. Definitely peek in if you ever get a chance.

Pärlans Caramels. Handmade the old fashioned way in a little shop using the recipe of the founder’s grandmother. The shop is charming as can be — decorated with furniture and wallpaper inspired by her grandmother’s home. We tried 9 different kinds — peppermint & polka, vanilla & sea salt, and pistachio & sea salt were my favorites.

Of course, for every shop we stopped into, there were another 5 we didn’t have time for. So this is just a tiny sampling of the SOFO area. It’s a place to shop, to walk, to fill your inspiration well, to see what’s new and cool in Swedish wares. 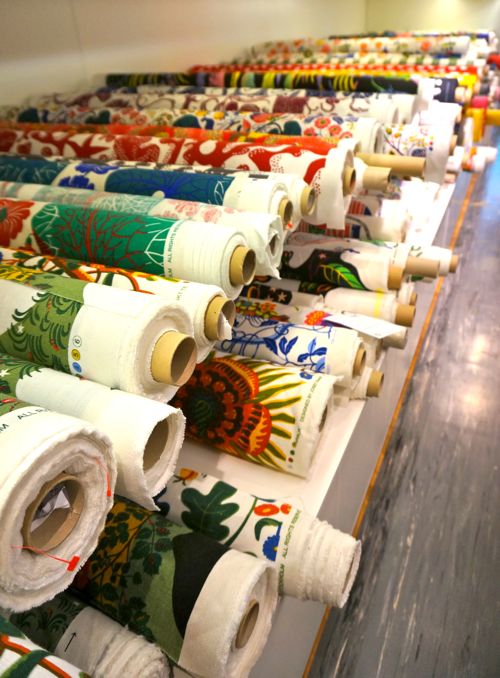 After exploring SOFO, we made a visit to Svenskt Tenn. We met their creative director for lunch (taking tea in the Svenskt Tenn tearoom is high on my recommend list!), and spent a couple of hours learning about this amazing Swedish store/cultural institution.

This was a life changer for me. I can’t stop thinking about the founder and her vision. I’m quite obsessed! And I came away with two books — one about the founder, and one about the lead designer. I’m going to mention our visit here, but not tell you much about it because I have too much to share. But I will definitely be writing up a separate post about this place! 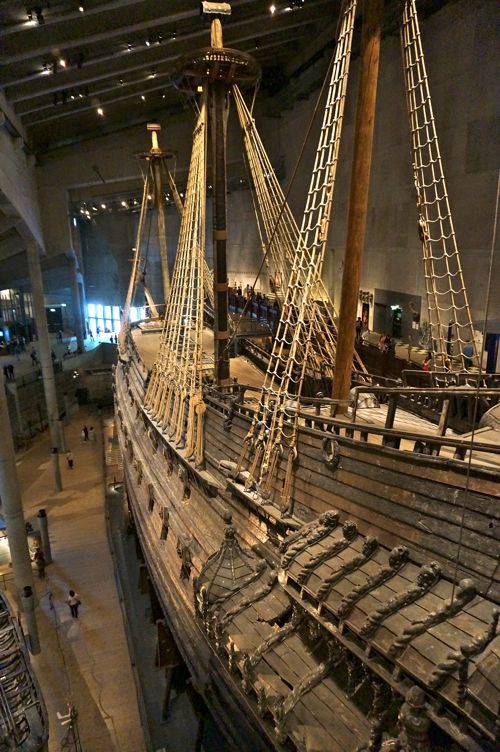 During the afternoon, we made our way to the Vasa Museum. (Our Stockholm Card gave us free entry.) We’ve heard it’s the number one tourist attraction in Sweden. It’s a massive wooden ship with an infamous history. It was commissioned by a Swedish king centuries ago as a way to intimidate on the sea. But against the ship builder’s advice, the king demanded the ship be built higher and higher — 4 stories high. The day it set sail, it sunk almost immediately, never even making it out of the Stockholm harbor. The king was so embarrassed, he wouldn’t let anyone talk about it and tried to erase the incident from history. 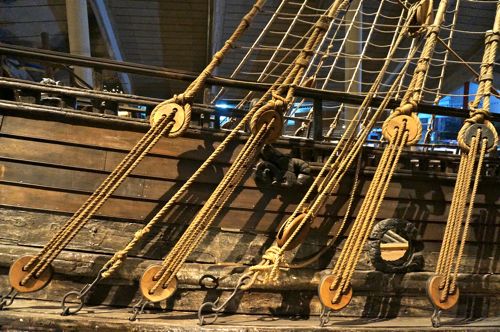 But the secret was passed along, and 300 years later, the ship was discovered and brought up from the ocean floor. It was in remarkable condition, and you can see the whole restored ship (98% original!) at the Vasa Museum.

By the way, next door to the Vasa is the Pippi Longstocking museum. If we’d had our kids with us, we would have gone for sure! Which reminds me, I was struck at how family friendly Stockholm is. Lots of parks. Tons of strollers. Babies in restaurants. Every museum has a kid program or kid section. Even the airport has awesome spaces for kids to play. 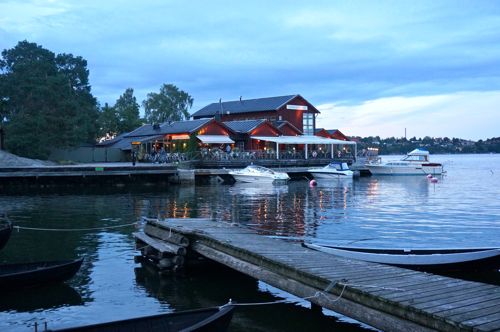 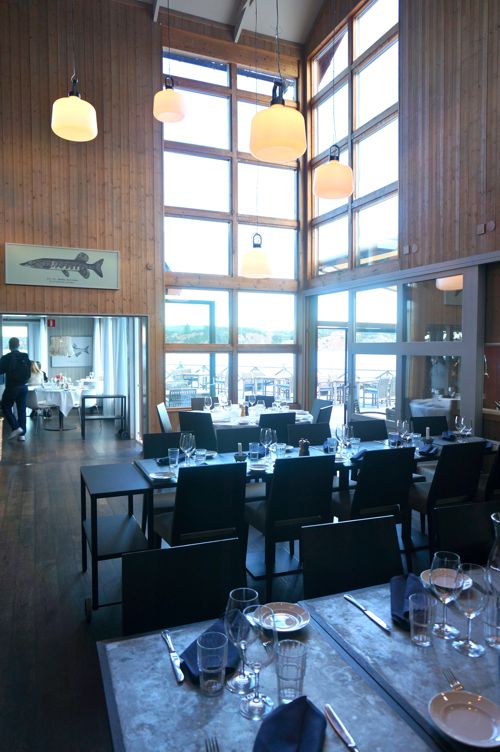 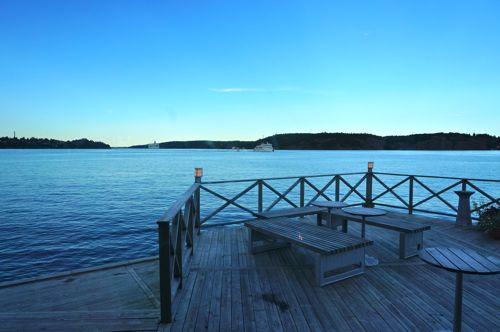 That evening, we took a boat ride out into the archipelago and ate at Fjäderholmarnas Krog. Truly amazing! It’s just a 25 minute boat ride away from the city. The views were stunning. The meal was excellent — I practically licked my plate clean.

The restaurant is found on a small island that takes maybe 10 or 15 minutes to walk around. So beautiful! After dinner we explored the island a bit and happened upon a small outdoor theater where an Abba singalong happening! And then we watched the sun set while we waited for the boat back to Stockholm. 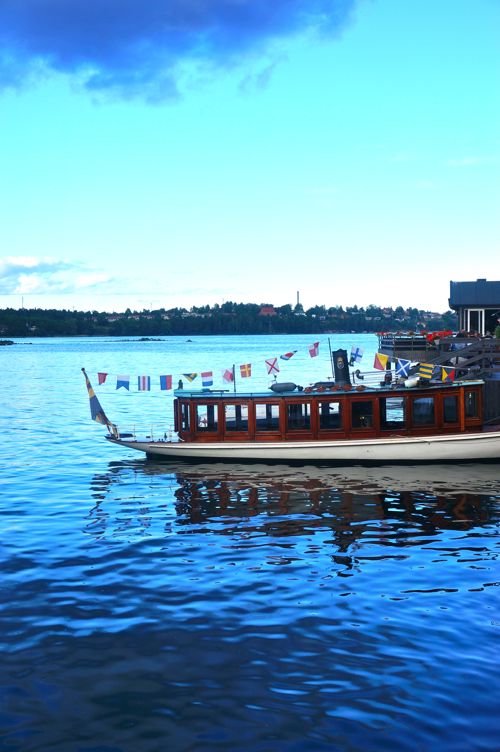 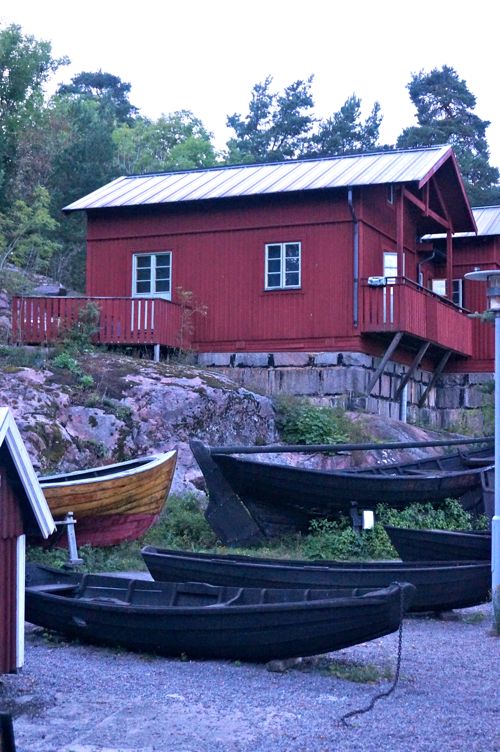 A magical end to a magical day.

That covers our day two itinerary, but I still want to mention two of the things we discussed with our tour guide. First, Elisabeth mentioned that at some point in the last century — maybe 50 years ago — the country of Sweden decided they would stop using the formal version of their language. Like many world languages, they had a formal and informal mode of speech, and they knew that by getting rid of the formal version, they would be taking a big step forward to equalizing citizens and breaking down class separations.

I thought that was amazing! We’re talking about a major cultural change. Language develops over centuries and affects the way we think and act. To officially ask (require?) citizens to stop using certain words or ways of speaking all of a sudden is a BIG deal. And the idea that the whole country simply accepted it for the sake of the greater good is remarkable to me. Elisabeth said that as a result of the change, she would address any other Swede she met — including the Prime Minister — by first name.

A second topic that came up and that I keep thinking about, is that Elisabeth mentioned having a housekeeper or house cleaner is generally frowned upon, even if you are wealthy enough to hire someone. She said the idea is that Swedes are expected to clean up their own messes. She also mentioned this cultural guideline has become more lax in the last few years. There has been a wave of immigrants who don’t speak the language, but are in need of work, and housekeeping jobs make sense while they integrate into the culture.

So now I’m dying to know: What’s your response to their no-hired housekeeping approach? And what do you think it would be like if your country made significant changes to your language? (I was trying to imagine what it would be like if American kids called all adults by their first names — even their school teachers.) Also, have you ever visited Stockholm? What were your favorite parts? Did you get a chance to have any cultural discussions while you were there? I’d love to hear your thoughts!

P.S. — For a full list of shopping recommendations, I loved this guide — with categories for fashion, design, vintage and food.