Our school year is winding down here in France, so I thought it would be fun to write up another little update on our kids’ experience in the local schools. I hope you enjoy it!

The first thing I wanted to mention was handwriting. I snapped the photo of the chart below in the 6-year-old’s classroom at my kids’ school. Having good handwriting is a big deal here! And seems to be a universal skill. Even at the village market, all the signs for fruit and veggies are hand written in beautiful script. 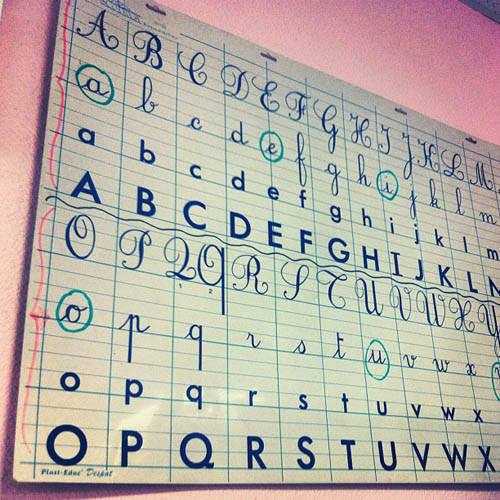 Ralph says when he first arrived, his math teacher picked up one of his worksheets and publicly started scolding him. (This is awful! I can’t read it at all!!) Ralph was so embarrassed! He has since started working hard on his penmanship, and has vastly improved.

Script is the main form they learn to write in — even the littlest kids. I don’t think I’ve ever seen kids use basic print on their school work or even notes to friends.

Along with good handwriting, instead of mostly using pencils in school, they write with pens only. In fact, all of my kids agree that in French schools, pencils are exclusively for art and geometry. No exceptions!

From the moment they start learning to write the alphabet, at around age 5, they use refillable ink fountain pens. But. They also have pen erasers — a separate tool from the pen itself. 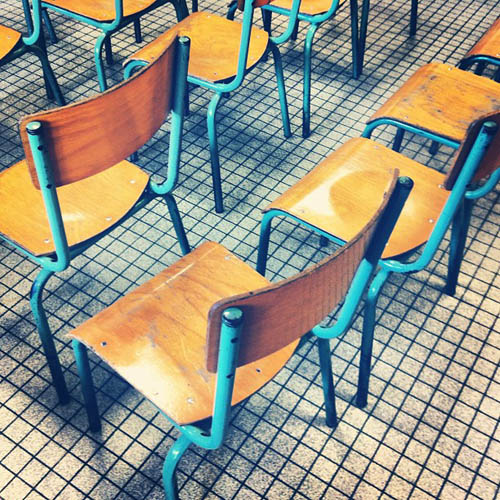 Something else that seems so different is athletics. Sports seem to play a less influential role overall in the schools here, compared to our experience in New York and Colorado. Maude says there are still jocks — they’re the kids that are good at soccer. But that being good at sports isn’t really what makes you popular, and that even the athletes feel like school work is the most important.

Sport shorts are short! For both girls and boys. And no one would ever wear athletic clothes or sport shots as school clothes. Athletic clothes are reserved for gym only. The same holds true for adults — I have never seen an adult running errands in workout clothes or yoga pants. Never even once!

Here are the sports that have been covered in my kids’ gym classes: Badminton (this is big here!), handball, inline-skating, swimming, ping pong, kayaking, rugby, cricket and soccer (which, of course, is called football here). They’ve also had a section on baseball, but Olive says it’s not quite the same — for example, they hold the bat with one hand!

Lastly, one thing my kids have noticed that’s really different from American schools, is the public criticism. Similar to the story of Ralph’s handwriting above, the teachers announce each student’s grade on every test and assignment publicly. And they’ll scold (sometimes even mock?) students who didn’t score well — right in front of the rest of the classmates. My kids report that the French kids don’t seem to notice, it’s just the way it’s always been. But you can bet my kids are always relieved when they get a good score!

I’d love to hear what you think! Would your kids thrive in a French school? Do you have an opinion on good penmanship?

P.S. — You can find earlier reports about school and my kids learning French here, here, and here. The very first report is here.