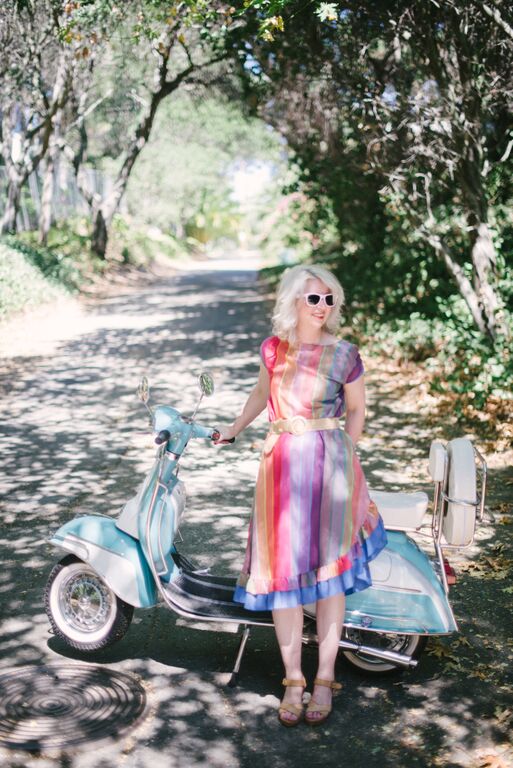 The other day, my friend Caroline pointed out the red A attached to the back of her car window. No it’s not a scarlet letter, it’s to indicate to other cars that there is an Adolecscent driver (her daughter) behind the wheel. It’s actually a law here in France. I don’t know the details — like how long it must remain in the window, and what ages are considered adolescent — but I think it’s smart. An easy heads up that the car in front of you has a relatively new driver, so you can cut them some slack (and maybe give them a wider than normal space on the road).

Teens in France can’t get their driver’s license until age 18. I was thinking about that, and then I saw this article from the Washington Post about how the car culture in America is dying.

I both related to the article, and felt a wave of nostalgia about the topic. I related to it, because while I was super excited to get my license, and took my driving test on my 16th birthday, my two oldest kids weren’t in a big hurry to get theirs at all — Maude was almost 17, and Ralph just got his before we left to France, at 18 and a half. But more than that, neither of them seems to enjoy driving that much — it seems more of a task for them than a pleasure (which I realize could partly be California traffic).

Additionally, I don’t know that they feel the same freedom that driving gave me as a teen. My car literally connected me to my friends and their homes after school and on the weekends. But with cell phones, my kids are connected to their friends all the time, with or without a car. Anything they need or want can be delivered to their door easily. For them, a car, and driving, is optional. In fact, I feel like I know lots of 16-and-older kids in Oakland that don’t have a license. It’s a costly, time-intensive thing to get. And then there’s the cost of owning a car. It’s easy to skip it and use buses, trains, and ubers instead — or just bum a ride from a friend.

It’s taken me awhile to realize that driving for my kids is simply going to be a different thing than it has been for me. And my younger kids may never learn to drive at all. Learning to drive and owning a car may end up becoming a hobby instead of an almost universal American need.

That’s where the wave of nostalgia comes in. I have lots of happy memories around cars and driving. My dad was always buying and selling cars, a wide range of them, and I formed opinions about which ones I liked best from an early age. There are certain vintage models that make my heart sing! And I can list you the favorite cars I’ve owned, like the ’83 red Landcruiser and the vintage 4L Renault. Of course, I’m not the only one. Sometimes it seems like growing up in America includes having opinions about cars and connecting them to your identity. My experience is not unusual.

But times are changing. In cities, programs that offer shared “ownership” of cars are taking hold. Things like Car2Go and Zipcars. The whole community shares them, there is always one available and nearby, and you just drive them as needed. That appeals to me too. The idea of not needing to personally own and care for a car, but having one available, sounds really good.

Even with six kids, we’ve been a one car family for almost our entire marriage. It’s easy for us because we work at home. But with more drivers in the house, we’re thinking about adding a second car this fall. Though we’re not totally convinced. When we do the math, and add up insurance, car payment, fuel and maintenance, setting aside a budget for public transit + uber/lyft would cost about as much and take up less time and thought.

All this makes me curious. Do you have your driver’s license? If you have kids 16 or older, do they? Do you feel attitudes about driving are changing for teens? Are cars important to you personally? Do you connect them with your identity? Like, are there certain cars you would never drive or own because they don’t fit your image? Or are you A-OK with any vehicle as long as it gets you from point A to point B in comfort and on time? And beyond the car, what about driving itself? If you had access to a self-driving car would you be happy to give up driving? Or do you love the act of driving?

P.S. — I shared this article on Friday, but in case you missed it, it relates to this topic. It’s a vision of what a city might look like when the average citizen doesn’t need to own a car, and all cars are self-driving.

83 thoughts on “Do You Have a Drivers License?”