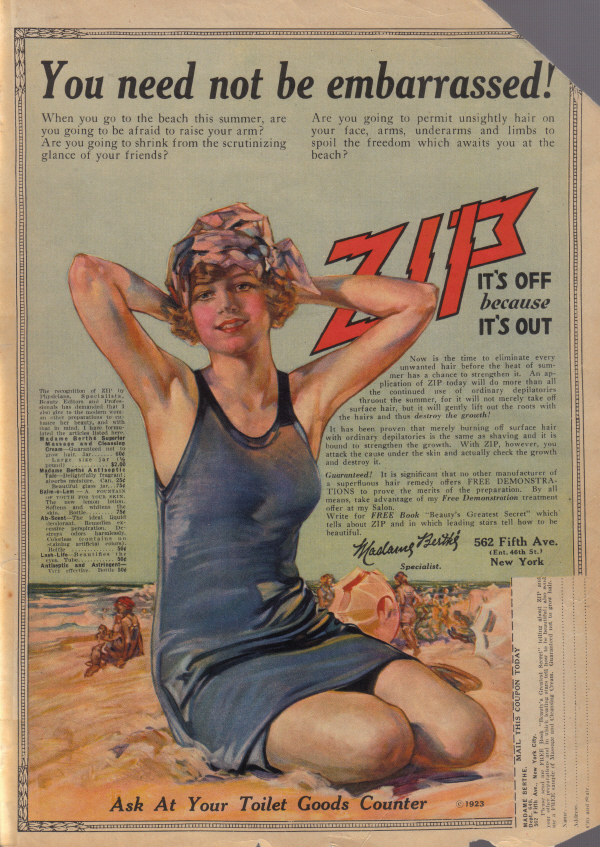 I’ve never thought much about the history of shaving for women, and was fascinated by this article that chronicled some of the key dates. Apparently, shaving for women only started 100 years ago when Gillette introduced a razor for women and introduced the idea that women needed to shave their underarms. From then until now, the idea has become so entrenched that it’s nearly universal in our culture, and pretty much a given that women will shave their legs, their underarms, and their bikini lines (at least during swimsuit weather).

But apparently, the percentage of women shaving is going down these days. From the article: “A 2016 Mintel study reported that between 2013 and 2016, the percentage of women who shaved their legs fell from 92 to 85 percent. Mintel cited several possible reasons for the change, including the popularity of the wellness and natural-beauty movement and a desire to buck societal expectations. Celebrities who don’t shave, such as Monique, Julia Roberts, Madonna, and Bella Thorne, have also given the phenomenon more visibility.”

It made me wonder, is the current generation of parents passing on the idea of “needing to shave” to our daughters? And will the practice continue to aggressively decline?

I can imagine my own daughters not shaving, or at least being very casual/intermittent about it, or making it a very low priority. I can already see it’s not something they stress about. Especially compared to me and my friends as a teen — I remember feeling like it was totally not okay to go swimming without being recently and thoroughly shaved (legs, underarms, and bikini line).

My personal habits of hair removal have definitely changed over the years — always moving in the shave-less direction, but I think I’m indoctrinated enough to the idea of shaving, that I don’t know if I would be comfortable going out in public with my underarms hairy.

If hairy women becomes the cultural norm, will I get on board? Or will the idea always feel sort of strange in my head? And will the meaning and intention behind shaving change in a way I can’t predict?

I’m reminded of a story that my mother-in-law tells about her mother, Jennie Groberg. When bras were first widely introduced as undergarments, Jennie was taught they were immodest and inappropriate. She wouldn’t wear them. By the time she passed away, in her nineties, the opposite idea was true — our culture had decided it was immodest not to wear a bra, and school dress codes everywhere confirmed it. But Jennie still thought they were totally immodest and never wore one her whole life.

Will shaved legs or shaved underarms be considered inappropriate at some point?

What are your thoughts? Do you shave regularly? Have you shaved less and less as you’ve aged? If yes, is it because you are making a statement? Have less hair? Just don’t care what anyone thinks? Is there anyone reading who has never shaved? If yes, what made you bypass the cultural pressure? For the parents reading, have you taught your daughters to shave? Or will you? Or perhaps you’ll teach them specifically not to shave? I’d love to hear!

83 thoughts on “Did You Teach Your Daughters To Shave?”