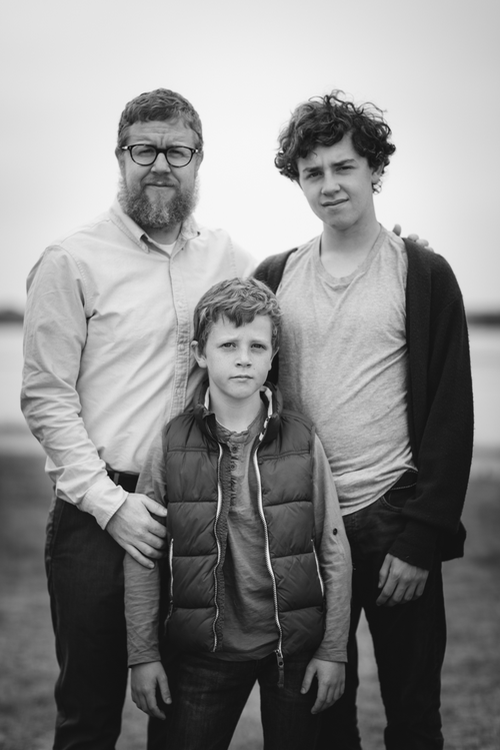 It’s been heavy on holiday gift guides around here, so let’s take a break and talk about something completely different: hair loss and balding.

Ben Blair and I were talking about this the other day after looking at pictures of my dad in photo albums. Ben is 45, but still has a thick head of hair. It has faded from bright red over the years, and he has some good salt and pepper mixed in now, but as far as I can tell, it hasn’t thinned.

I told him that it’s possible his wonderful hair is somewhat wasted on me, because I grew up with a dad that was mostly bald, and it left me totally comfortable with baldness. In fact, I remember being surprised when I realized that some women were stressed out by the idea of bald men (maybe it was an episode of Sex & the City?). When dating, I didn’t see baldness as a deal breaker at all. Basically, Ben Blair could lose all his hair and I don’t think it would change my attraction to him.

Now that my kids are getting older, I’ve found myself wondering if male pattern baldness or other gene-related hair thinning, will affect them. Growing up, I was always told that the gene for male-pattern-baldness goes through the mother, so if the mom’s father was bald, her sons will be bald. Which means my sons would be bald.

But I’ve learned that’s not actually true. And if I look at the bald men I know in real life, I can easily see it doesn’t actually work that way. For example, my mom’s father always had a thick head of hair, but some of my brothers have lost theirs. And it’s the same thing with Ben’s brothers — Grandpa Groberg didn’t bald, but some of his daughter’s sons have.

As for female hair loss, I’ve experienced it in a major way after pregnancy, and when I tried the copper IUD. In both cases, I’m not sure if other people noticed, but I certainly did, and it pretty much freaked me out. Beyond those instances, it hasn’t been much of a problem so far. I feel like my hair is thinning somewhat with age, but not enough to make me take action. Maybe I don’t mind because it’s so short?

If you’ve ever experienced hair loss, then like me, you’ve probably read up on Rogaine. It’s actually pretty cheap these days. There are generic options that cost less than $5 per month, and it’s widely available. It mostly comes as a foam that you apply twice daily to affected areas (for men it’s typically the crown and forehead), and it can take about 4 months to see if it’s really working. From what I understand, it works to prevent hair loss, but doesn’t grow hair back. For certain types of hair loss it’s quite effective, but if you stop using it, the hair loss occurs again immediately.

I know less about Propecia. In fact beyond knowing it requires a prescription, and can have severe side effects, I really don’t know anything about it at all.

Rogaine is also available for women — and shocker: it’s more expensive than the male version, I assume because of the darn pink tax. I have only talked to a few women who have tried it and don’t know how effective it is us ladies. Mostly, when I talk with women about hair loss and hair thinning, the suggested fixes are taking a daily dose of biotin, and making sure there’s nothing happening with your body that’s known to affect hair loss (like the copper IUD did for me).

Though it seems like hair loss is a less frequent occurrence for women, I imagine it could more traumatic than it is for men. Though I’m sure it’s a total bummer for men to lose their hair, it’s certainly a normalized thing in our society, and there are lots of examples of successful men who have shaved their heads due to baldness. For women, it’s a different story. I’ve found female hair loss is rarely talked about openly — even for women going through cancer-related hair loss — and comes with a great deal of shame. I’ve also observed that women can hide it more easily than men can by wearing wigs.

What are your thoughts on balding, hair loss, or thinning hair? Do you have kids old enough that they have experienced hair loss? Is this something that worries you? When you were dating, were bald men a deal breaker for you? Or if you’re dating now, does it cross your mind? What about female hair loss? Have you tried Rogaine for Women? Is there another product (or a supplement) that has worked for you? Would you ever wear a wig? I’d love your thoughts and tips.

44 thoughts on “Are Bald Men a Deal Breaker for You?”