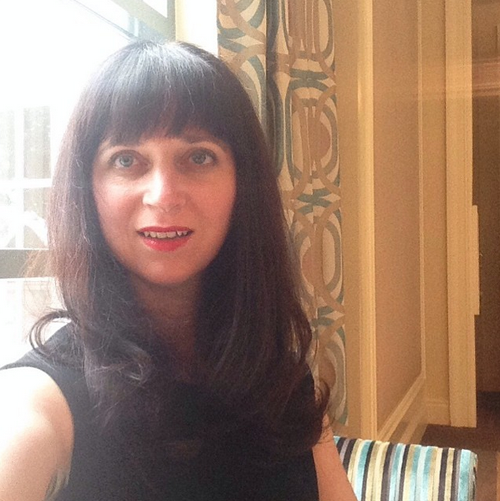 Thank you for the terrific comments and discussion last week about experimenting with looks and identity. I went out that same day and had bangs cut! Not an extreme change, I realize, but still fun to get a glimpse of myself in the mirror and see something new.

I have no idea how this will technically work (I think he said something about avatars), but let’s pretend for a minute that it will. Let’s imagine for a minute that it’s a fact. If you could appear however you like to the people that you encounter — without actually changing your body (no pain, no surgery) — would you choose to look any different than you do now?

Then, I thought: no, to appear as a completely different person will be difficult — people will want to be recognized by friends and family and colleagues. So perhaps it will be subtle things, like being perceived as having straighter teeth, or smaller pores, or a scar that can no longer be seen. This would be closer to what some people do right now — dyeing hair or getting nails painted or wearing spanx.

Next, I thought: I can already guess at the backlash. If everyone appears as a perfectly coiffed, super gorgeous human all the time, I can imagine a resurgence of appreciation for appearing naturally. A recognition of the true beauty found in the variety of the human race.

As I continued thinking about this, my friend Rona came to mind. I met Rona when Ben Blair and I lived in Athens, Greece, seventeen years ago. She was an expat from England, and sometimes we would discuss accents in England and how they affect social status. She said that in certain shops, she would use a different accent — an accent that made her sound like she was part of the nobility — in order to get better service. It wasn’t a change to her body, but still affected how she was perceived.

This got me considering characteristics beyond physical bodies — things like accents, or confidence, or attitude (maybe rebellious, or obedient), or even clothes and brand names — and how they affect how we are perceived by others.

I haven’t read the book, and it’s very likely I don’t understand correctly, but ignore that for a minute and chat with me. What thoughts come to mind for you? If you could appear differently to those around you, would you? Would you go for a drastic change, appear as is, or something in between? And whatever you would choose (from drastic to no change at all), what does that tell you about your self-image? Do you like how you look right now? Do you feel like people perceive you accurately and positively?