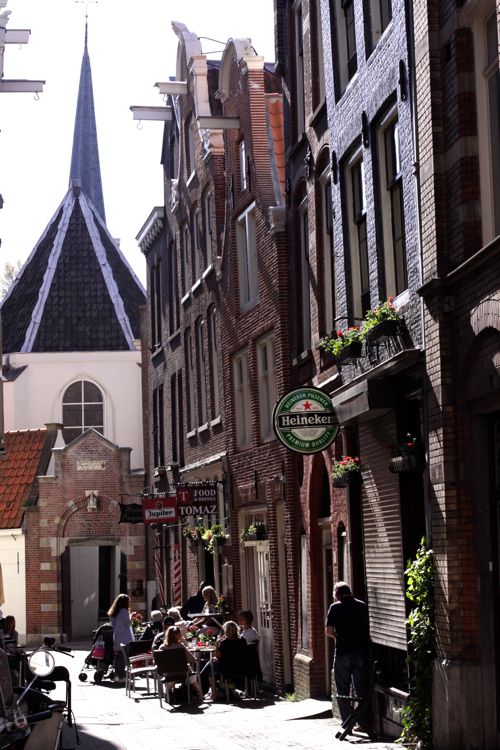 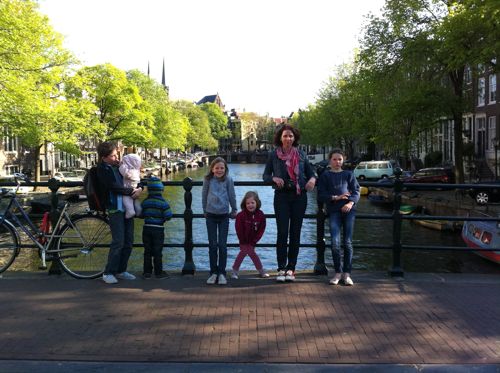 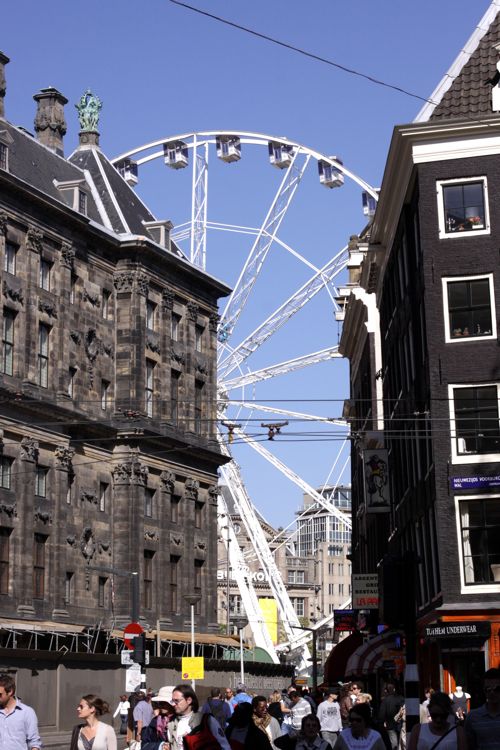 I woke up today thinking about our visit to Amsterdam. I talked about wonderful Vondelpark here, but I wanted to have a record of other parts of our trip that stuck with me. So please forgive the rambling nature of this post. : )

I have to say, I fell in love with Amsterdam immediately. Our hotel was in a great location and we could wander the streets and find interesting spots in every direction. The Palace. The Nine Streets shopping district. Museums. Charming side streets. And canals everywhere you look! 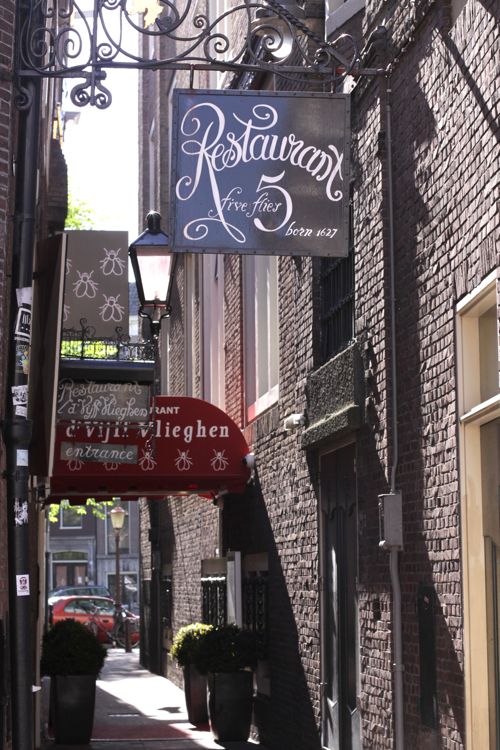 On one of our walks, we happened upon the floating flower market. It’s Amsterdam’s flower district  — but it floats on barges in one of the canals. Isn’t that fun? 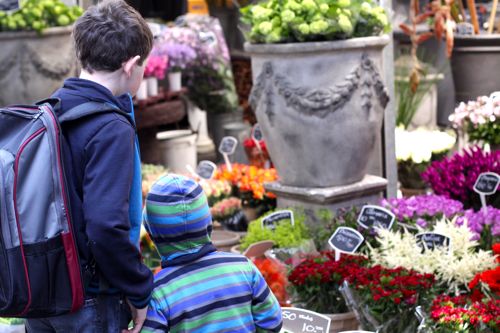 The floating flower market sells all sorts of flowers, but the real prizes were the enormous bulbs. Seriously big! Notice Maude’s hand below for size reference. : ) 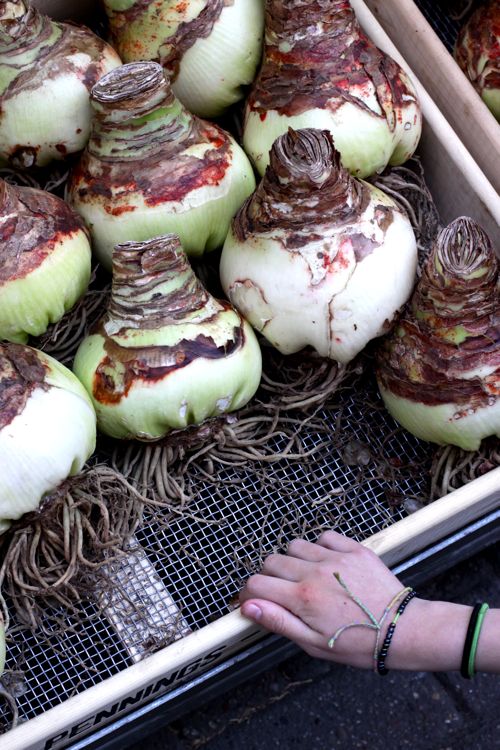 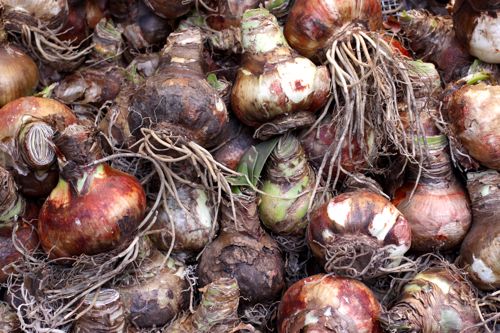 Speaking of bulbs, I’ll share our images from the tulips fields in another post. I think we saw the very last fields of the 2010 season. : ) 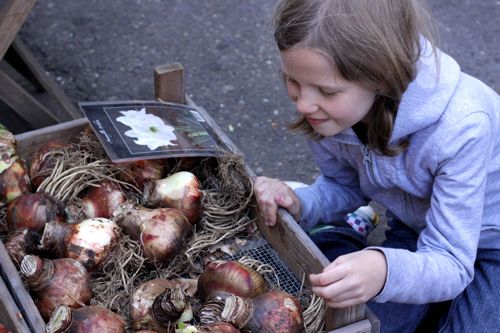 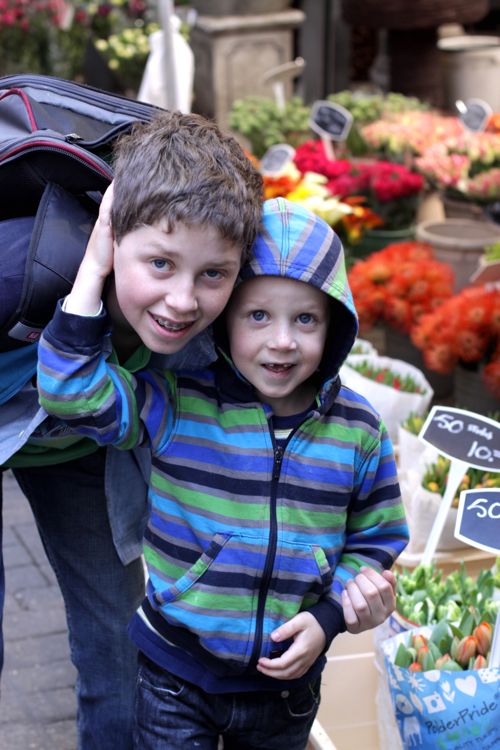 The main visual impression Amsterdam left me with is: bikes. I was told ahead of time that Amsterdam is a city of bikes, but I didn’t really understand until we arrived. There are bikes everywhere. Everywhere! The city streets are an organized mishmash of bike lanes, car lanes and pedestrian lanes, but I’m pretty sure bikes rule.

It was neat to stop into grocery stores or convenience stores and see bike accessories, bike baskets, and flat tire kits for sale. 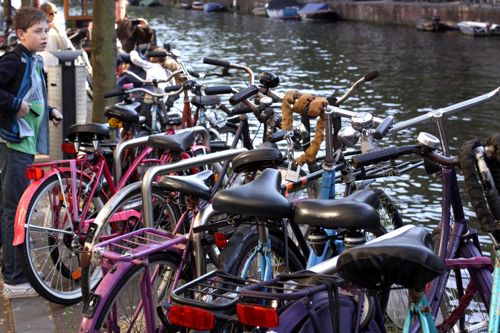 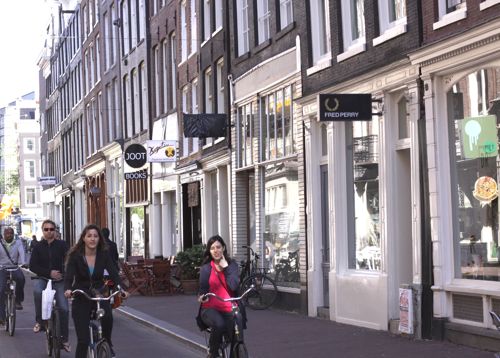 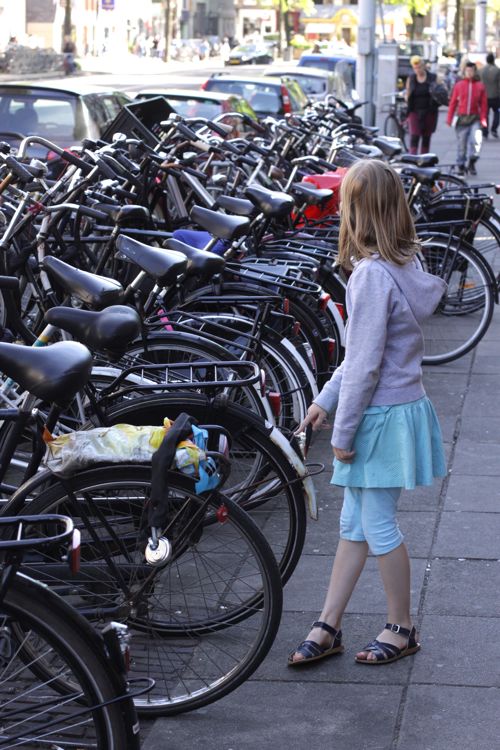 Ben Blair commented that Amsterdam has everything fun about our beloved New York — trendy stuff like frozen yogurt (we stopped at Frozz twice!), and lots of international food choices. But it’s also very European with cobble stone streets, bridges and canals, charming architecture and the very real possibility of hearing 5 different languages as you walk down the street. 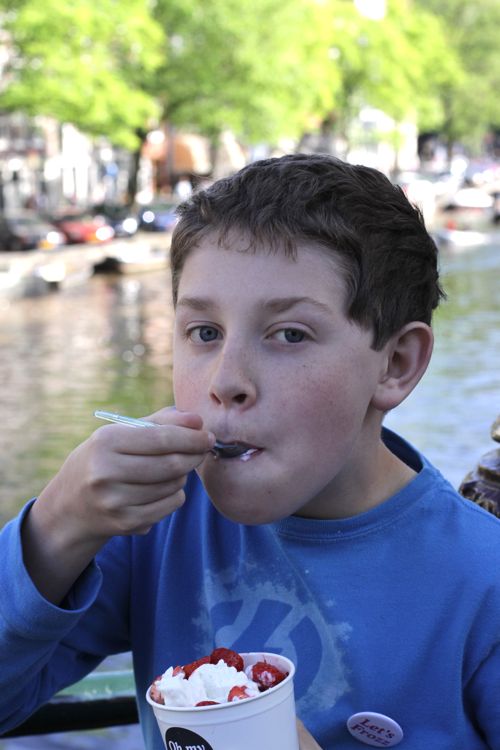 Of course we wanted to taste the local faire. So we ate poffertjes (little puffed pastries) and pancakes at Sarah’s Pancake House. The pancakes were huge! They covered the whole plate. Everything was delicious, but I especially loved the cherry poffertjes. Tart cherry is one of my favorite flavors. 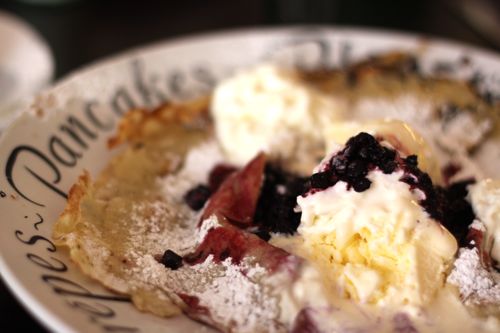 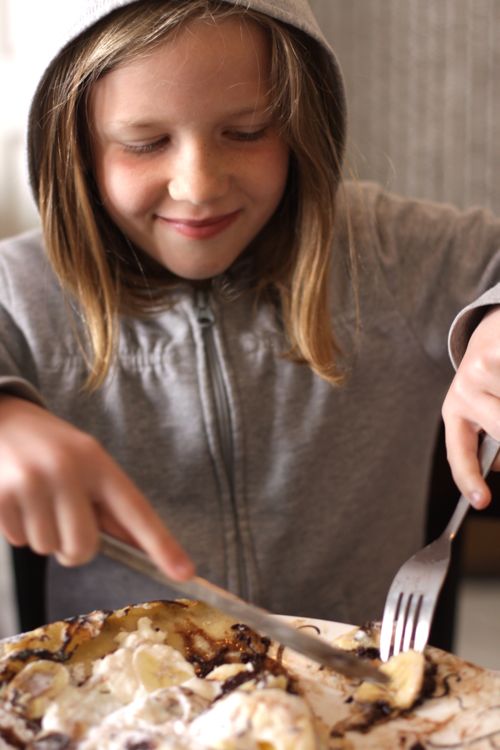 The canals are certainly the most distinctive thing about Amsterdam. One afternoon we took a canal trip and the tour guide said that an average of one car each week ends up in the canals! Can you imagine?

The canals in Amsterdam felt different to me than the canals in Brugges (our report coming soon!) or Venice. In Amsterdam, it’s like they took a big, modern, metropolitan city and then filled the streets with water. 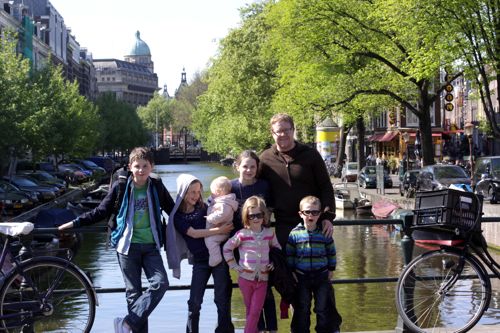 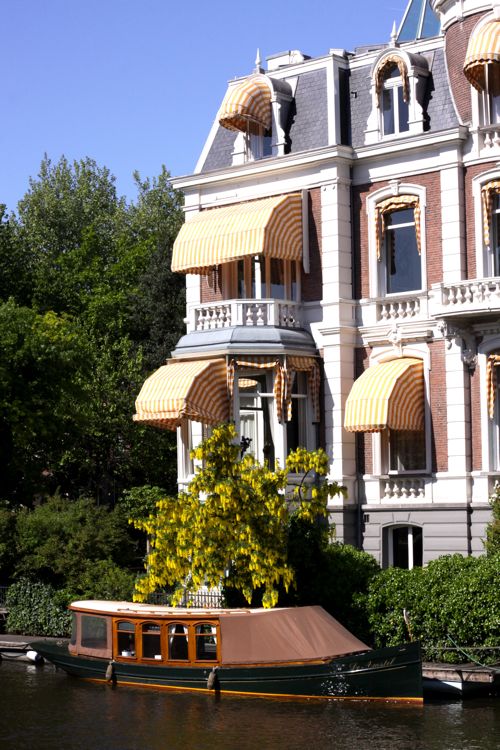 Do you see the hook? Every house in Amsterdam has one. They use it to move furniture in and out of windows. 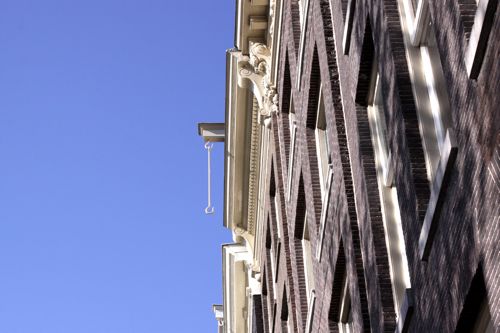 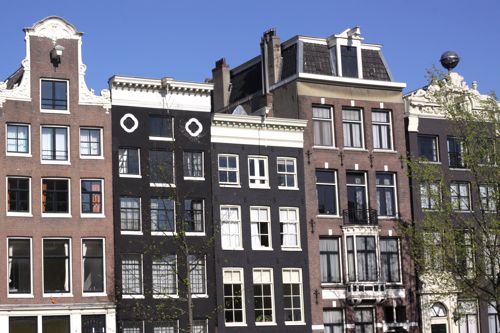 One night, Ben Blair and I met Esther of Babyccino and her husband for dinner. We ate at an Indonesian restaurant which I can’t remember the name of, but which we really enjoyed. (Did you know that Indonesia used to be a Dutch colony? Me neither.) It was wonderful to meet locals for dinner. Esther and her husband were endlessly fascinating — they’ve lived everywhere and were super fun to talk to. At dinner and throughout our visit, we were impressed by how seamlessly the population moves between Dutch and English.

Growing up in St. George, my family would make frequent trips to Los Angeles and the drive was 6 hours long. So in my head, any drive in the 6-hour-or-less range is super doable. (Do you use mental references like that?) Amsterdam is 6 hours from our home here. So close! I think that’s one of the really fun parts about living in Europe. Instead of passing through different states, a six hour drive can take us to several different countries.

How about you? Have you ever spent time in Amsterdam? What was your favorite part about the city?

P.S. — Ben Blair snapped the photo below when we walked to dinner. I know it’s blurry, but I love it anyway. It looks to me exactly how Amsterdam felt to me. : ) 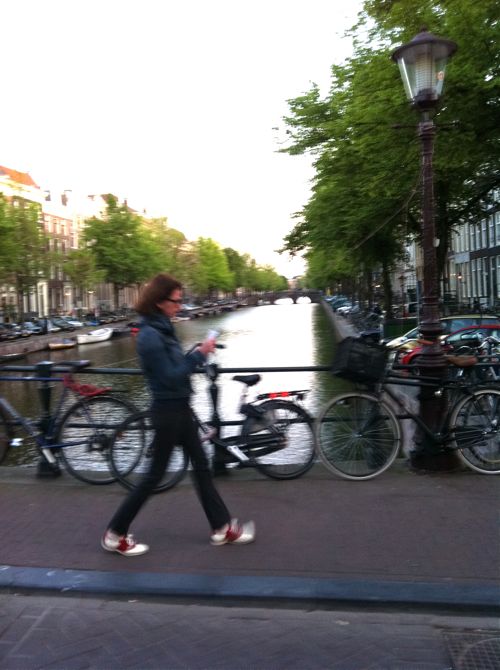