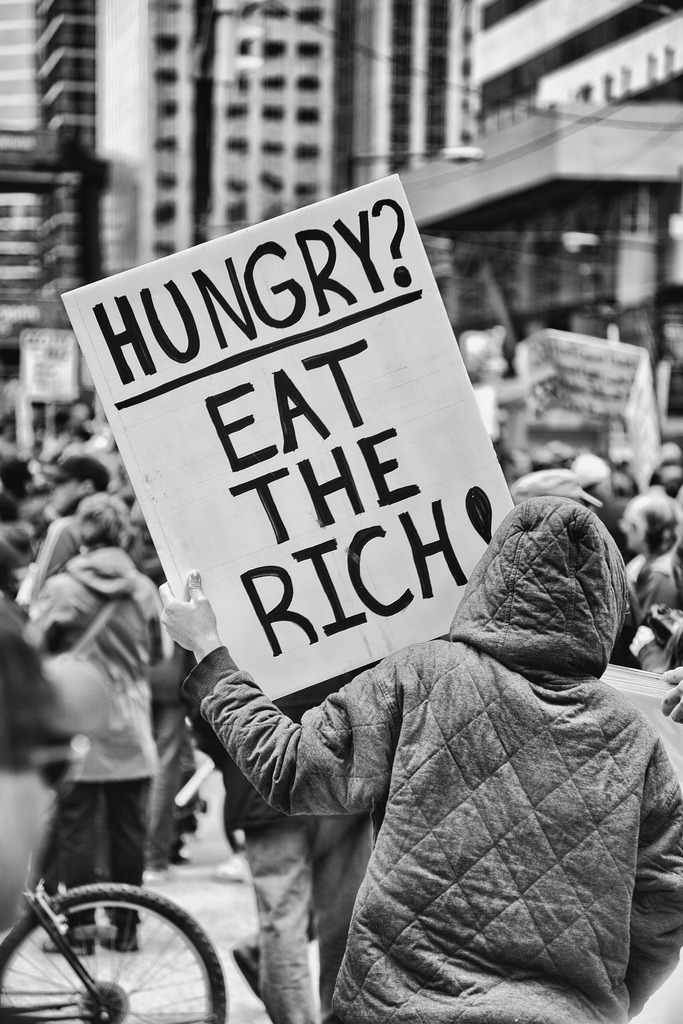 In 2017, I wrote a post talking about wealth and asking if there was such a thing as too rich? At that time, a lot of the comments were pro-rich people:

“I don’t think there is anything bad about being rich. It’s what you do with your money, and where your head is at, that counts.”

“I don’t think [capping wealth] is a fair idea in that some very wealthy people have very large portfolios of work and do a lot of good and invest in a lot of innovative projects.”

“I find it hard to say that there’s anything bad about being rich, because you end up in a philosophical dead-end where you have to justify owning anything at at all! I mean, how do you decide where to draw the line? When do you know whether enough money is enough?”

“I think it’s immoral to assume other people know best how to use your money.”

But others were critical of the very rich:

“What always strikes me in conversations like these is how so many people who make a lot of money believe that they do so because they work hard. The flip side to that — which usually goes unmentioned — is that if you don’t have money, then you aren’t working hard enough. And that is so infuriating! People work as hard (if not harder) for their $20,000 salary as you do for your $200,000. The difference is usually a matter of luck and circumstance.”

“I’m so surprised by these comments. I’m so surprised that no one has jumped in and said yes – wealth in the context of poverty is immoral – like it is a threat to even entertain the notion.”

The topic of wealth inequality is all over the news right now and I don’t think it’s a stretch to say the public mood toward the very wealthy has shifted in a big way — even since 2017. Here’s an assortment of what I’ve seen just in the last week or two:

– This clip of a Dutch historian confronting all the attendees at Davos about tax avoidance, went viral. “I hear people talking the language of participation and justice and equality and transparency, but then, almost no one raises the real issue of tax avoidance, right? And of the rich just not paying their fair share. It feels like I’m at a firefighters conference and no one’s allowed to speak about water. Stop talking about philanthropy, start talking about taxes.”

– A New York Times opinion piece was titled Abolish Billionaires. “A billion dollars is wildly more than anyone needs, even accounting for life’s most excessive lavishes. It’s far more than anyone might reasonably claim to deserve, however much he believes he has contributed to society. At some level of extreme wealth, money inevitably corrupts.”

– Along the lines of money corrupting people, here is actual language from the State of Massachusetts’ lawsuit against Purdue Pharma: “Eight people in a single family made the choices that caused much of the opioid epidemic.”

That family has billions from opioid sales. Was that money earned? Does it belong to them? Is it none of our business what they do with it?

– On the topic of the wealthy having earned their money, this is an interesting statistic: “Roughly 60% of America’s wealth is inherited, meaning most of America’s riches are owned by people who didn’t work for them.”

– At Davos, Bill Gates showed infographics describing how extreme poverty is going down. But some are calling baloney:

“The first [infographic] has attracted the most attention by far. It shows that the proportion of people living in poverty has declined from 94% in 1820 to only 10% today. The claim is simple and compelling. And it’s not just Gates who’s grabbed on to it. These figures have been trotted out in the past year by everyone from Steven Pinker to Nick Kristof and much of the rest of the Davos set to argue that the global extension of free-market capitalism has been great for everyone. Pinker and Gates have gone even further, saying we shouldn’t complain about rising inequality when the very forces that deliver such immense wealth to the richest are also eradicating poverty before our very eyes.

– In the Guardian, there are interviews with people who are actively speaking out against wealth inequality. “There has been a dominant narrative that has remained quite unchallenged in the media. This narrative suggests that there is no connection between the super-rich and abject poverty, that you can keep getting richer and richer, and this has nothing to do with people getting poorer. And it wasn’t always like that.”

– Trump’s tax cuts are helping to shift public opinion against the wealthy. Many, many Americans in the middle class and lower middle class — including his supporters — are just now finding out that they owe taxes this year, even though they have the same income as last year and have always received a refund in the past. They are furious.

– Pair that with this kind of news: UnitedHealth, an insurance company, gained $1.7 billion in profits for 2018 due to the tax cut — and you can feel the heat from the anger rising.

– Related: Over 500,000 US families go bankrupt from medical bills every year.

– And then there’s this: Forty-two people hold the same wealth as half the world.

– And this: The richest one percent received 82 percent of wealth created last year. The poorest half of humanity got nothing.

– And this: Over the last 30 years, Americans aged 45 or younger have become poorer, while Americans over 65 have become significantly richer. (NYT)

– Alexandria Ocasio-Cortez has suggested we need to return to a 70% or higher top marginal tax rate. Fox News was taken by surprise when they polled their viewers and found out the vast majority of them support the idea. It’s a very popular policy at the moment.

– Here’s a fascinating/terrifying thread on how a billionaire could see climate change as “good for business.”

– People are exasperated with welfare for corporations. For example, GM is planning to send pink slips to more than 14,000 workers and close three plants and two factories in North America this year. At the same time: “Under Trump, GM has received more than $600 million in federal contracts, plus $500 million in tax breaks. This is generous socialism for the wealthy and corporations, cold, hard capitalism for American workers.”

– In another example, the New York Times reports that Trump himself has taken over $885 million in taxpayer subsidies.

If an individual is earning massive wealth from a company that receives taxpayer subsidies, how is that justified? Clearly, the company doesn’t need the subsidies, and that money could go to other programs — perhaps toward education, medical care, and affordable housing. Should those companies and individuals be required to pay back the subsidies, with interest?

– The insulin issue I linked to last week (also in the NYT) is another illustration of this. Based on the history of this life-saving drug, insulin should be so cheap it’s essentially free. Instead there are no doubt very wealthy people who are growing even wealthier by holding millions of diabetic Americans hostage by jacking up the prices of insulin.

– A hallmark of Trump’s tax cut is that shareholder payouts topped a whopping $1 trillion by the second quarter of 2018.

– New York Magazine has an article about how our country’s founders felt concentrated wealth was incompatible with democracy. “America’s first political theorists took these truths to be self-evident: that a person could not exercise political liberty if he did not possess a modicum of economic autonomy, and that disparities in wealth inevitably produced disparities of political power.”

To me, it feels like pitchforks are coming. The time of glamorizing billionaires is over, and instead they are being seen as suspect and immoral. Recent articles with topics like how to protect fine art on yachts make the average American gag.

I’ve noticed it too, in the reactions to billionaire Howard Schultz who is considering a run for president. I keep seeing commentary along the lines of: Why should he run for president? How does having immense wealth qualify someone to be president? So he thinks he can just buy the election?

My suggestion to Howard, and to other billionaires who are sensing the pitchforks, is this: Pick an issue. For example, you could pick insulin. Use your vast resources and wealth to solve the problem. Be the person who makes insulin virtually free and ensures there are legal protections in place to keep it that way forevermore. And then, perhaps, Americans will think more fondly of you.

One take I’ve heard is that animosity toward the very wealthy simply encourages them to take their money elsewhere. When I hear that my mind goes first to this thought: Sounds good, go find your Ayn Rand secret island so we never have to hear your silly name again.

But then, my mind goes to appropriate consequences. Your wealth came from America but you don’t want to use it to benefit America? You fled the country? Okay then, you’ll be stripped of your passport and citizenship. Any assets you might owe the country in back taxes or subsidies you received will be frozen. You’ll be prevented from participating in the American financial system (like the stock market or real estate market) so that you can’t benefit further from American dollars. You’ll not be allowed back in our borders and never permitted a visitor visa. Stuff like that.

What is your take? Do you agree that Americans are shifting their opinions about the very wealthy? Or are you seeing something different? Do you have an opinion on top marginal tax rates? Do you think that’s too high or would you prefer even higher than 70%? What do you predict will play out in our country, and across the world, as income inequality continues to grow?