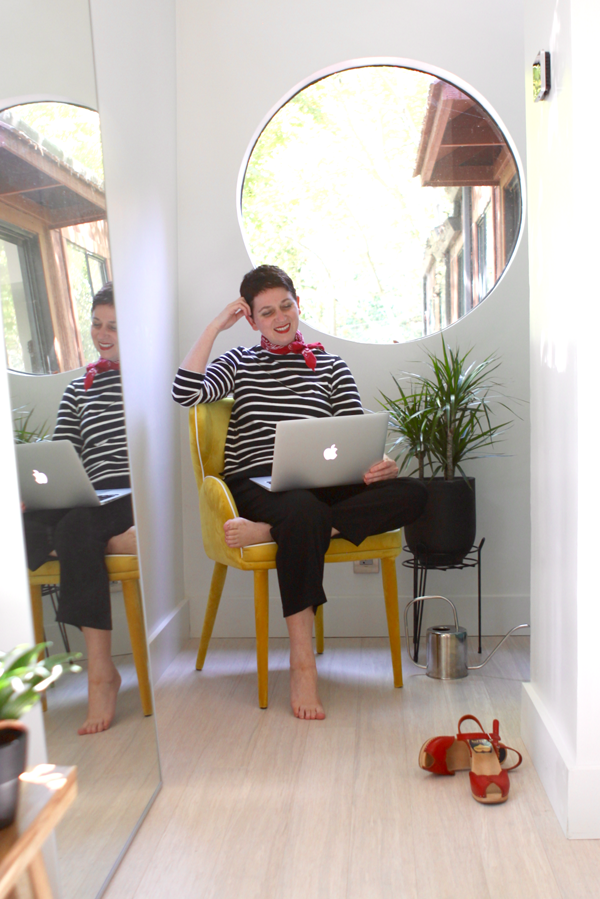 I gotta say, I’m quite intrigued by this. The other day a journalist named Rachel Syme wrote:

“So I interviewed a writer recently who only writes on her phone; she did two whole books this way. What’s more, she did one whole book by dictating the whole thing to Siri. And so I’ve been trying it…and it works.”

The writer she interviewed is Melissa Broder, and the interview was published in the New York Times last week. It includes this info:

In New York, she had always written poems and essays on her iPhone as she commuted on the subway, but she found this method difficult in Los Angeles’s car culture. So, she began to dictate a story to Siri in the car. “I don’t ever sit down at a desk and write a first draft,” she said. “I like to write in places where you’re not supposed to be writing because then there’s less pressure. So when I write now, I talk to Siri, and then my first round of edits is literally just trying to figure out what I said. Siri hears a lot of wrong stuff. Like, the other day she heard ‘That’s So Raven,’ and I didn’t say that. There are a lot of happy accidents.”

She began to speak out three paragraphs per day, and within nine months, she had finished the book.

MELISSA BRODER & HOW TO WRITE A NOVEL ON YOUR PHONE

I admit, I’m a total wimp about working from my phone. I’m so spoiled about having a full keyboard and being able to type quickly, and I avoid writing on my phone as much as possible. I confess, I’ve even been known to type an Instagram caption on my laptop and email it to myself. Not kidding!

But reading about Melissa Broder has me rethinking things. I could really be better at taking advantage of the tech that is available to me now.

Which reminds me of a related tangent. On Tuesday night, I was interviewed in front of an audience of Mormon students who go to Berkeley, and one of the questions was about why so many Mormon women took to blogging early on. I’ve been asked that question a lot over the last 12 years and I think there are a ton of different reasons. Looking back, I think at least one of the reasons has to do with tech.

I was 31 when I started blogging. I’d just had my 5th baby. My Mormon peers were in similar young mom stages, but my New York (not Mormon) peers were just getting married or thinking about having their first child, and were in the middle of their careers. During that time, it was common for Mormon women to stay home with their kids. (They’re still encouraged to this, but I don’t think the pressure is nearly as high as it used to be.) Being home with the kids meant that they had a flexible schedule and could grab a few minutes here or there to sit at their computer — to read a blog post, or leave a comment, or write a paragraph, or to edit some photos of the kids.

Now remember, no one had iPhones then. In fact smart phones didn’t exist, and laptops weren’t a common thing yet. Basically, as far as internet access at home went, you just had one computer at your house and it was a desktop computer, and if you wanted to use it, you had to sit down for a minute at your desk.

Which meant people couldn’t do blogging-type work from their phone or on a commute. If you wanted to look up products to recommend, or edit photos, or compose a blog post, or reply to a comment, you basically had to be at a desktop computer. I suppose if you had a BlackBerry, you could do some emailing or take a work phone call, but nothing else, and again, nothing really blog related.

So I think early on, with the tech that was available then, having a flexible schedule made a big difference, and allowed people to get in early to the blogging game. You couldn’t start a blog from a full-time office job without risking getting in trouble and losing the job. But you could easily start one from home. (Am I explaining that clearly?)

Anyway, I was thinking of that and how much things have changed. Obviously, now you can do all kinds of work from your phone. Having a full-time job, while experimenting with a side gig, is totally doable. You can squeeze in five minutes here and five minutes there and you don’t have to be tied to a desk to make something happen.

How do you feel about making the most of your device and write a novel on your phone? Do you tend to wait till you’re at a full keyboard in order to do work? Or have you found good ways you can work from your phone?

Like I said, I’m not great at it. I often don’t have my phone near me while I’m working and I’ve never really embraced it as a true work tool.

Lately, I’ve become convinced that I need to use my phone more effectively. I remember when I first tried using a laptop and I hated it. I was used to the giant screen on my iMac and found the laptop so limiting. But then, I was traveling so much for work that I had to get used to the laptop, and now I’m much faster on the laptop than I am on my desktop computer. I imagine the same would be true if I embraced my phone. It feels so awkward to me to work from my phone, and I’m much slower, so of course I avoid it. But if I embraced the phone, and learned the shortcuts and workarounds, I’m sure I’d get really good at it. It also occurs to me that people who are really good at getting their businesses to grow on social media are people who make the most of their phone time, you know?

The other thing I found really compelling about Melissa Broder’s writing technique is that she makes good use of small amounts of time. She only dictated three paragraphs a day, working in small bursts and making big progress over the course of nine months. Working in small amounts of time is another thing I’ve resisted. I tend to push off work until I have a block of time set aside — like an hour or more.

What are your thoughts? Could you write a book in 3 paragraphs a day, with or without Siri’s help? Does that appeal to you at all? Is my resistance to working on my phone an age thing? Or maybe it’s just that inertia thing that happens when you need to start a new habit or master a new skill/tool? Are you intrigued or inspired by the fact that Melissa Broder wrote three books on her phone? And how do you feel about working in small bursts of time? I’d love to hear.

19 thoughts on “Idea: Dictate A Novel to Siri and Write a Novel on your Phone”