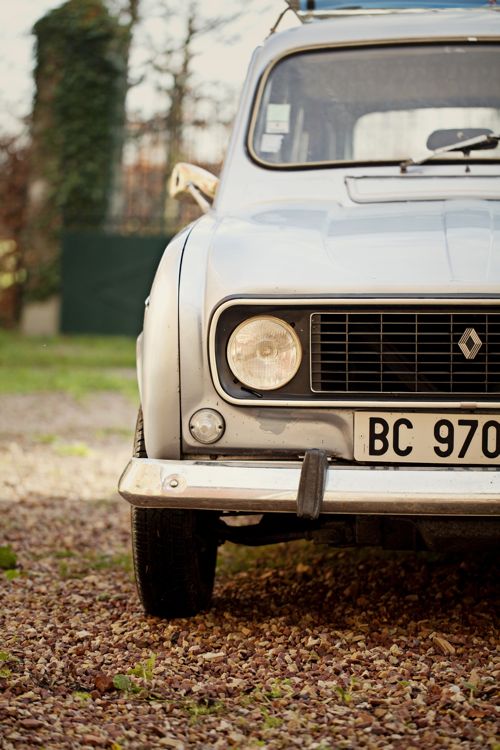 My brain is on overload with conference planning. Would you mind taking a break with me to chat about something lighter? Yesterday, I saw this picture of the vintage car we bought in France, it’s a (Renault 4L), and started thinking about all the different cars we’ve owned as a couple, and the ones I owned before I got married too.

My very first car was a Honda Civic Hatchback. I bought it for $500.

It was very old and fairly beat up, a sort of reddish-brown color, but it worked. It was a stick shift and the span between 2nd and 3rd gear was like 2 feet, I swear. : ) But after learning to drive stick on that car, I can drive pretty much anything. (Side note: In France, and throughout Europe, most cars — even rentals — are still manual. So it’s a skill worth learning if you ever plan to move across the pond.)

After that, I drove a bright yellow VW Bug for awhile, and my senior year of high school, I drove a pale yellow Dodge K-Car. I would park it out in front of the house, and leave the keys in it — in case someone needed to borrow it.

My freshman year of college, I drove a Ford Escort. I worked up in the mountains at Sundance Ski Resort (Robert Redford’s place), and that poor little Ford had the hardest time getting up the mountain. I would take the turn off up to the resort, and within a few minutes there would be a line of cars trailing behind me. I’d pull over, let them pass, start up the mountain, and sigh as the cars stretched out behind me again. Hah!

I’m pretty sure my next car was a Mitsubishi Precis. It was white. And we drove that same car as newlyweds too. After the Precis, we bought a blue Mazda Protegé.

And after the Mazda, we bought my favorite car we’ve ever owned. A 1983 Toyota Landcruiser. It was red. Gosh I loved that car. We took it with us when we moved to New York. Eventually, it broke down, and we couldn’t scrounge up the budget to fix it, so we sold it to a family from Pennsylvania.

80’s Landcruisers are still my favorite car. We don’t need one, but everyone time I seen one, I find myself on car app, seeing if there are any for sale nearby. Someday I hope we buy another one, just because it makes me happy. They are so dang beautiful.

I just counted and we’ve had 9 cars (and a vintage Vespa!) since the Landcruiser. But this “little” post is already getting long. So I’ll cut my report short. I do want to note that every single car I’ve listed so far was used. Like very, very used. In fact, I don’t think I’d ever visited a new car lot until years after we moved to New York.

P.S. — Remember the gorgeous Vintage VW Bus we used in this Carwash video?

53 thoughts on “What Was Your First Car?”