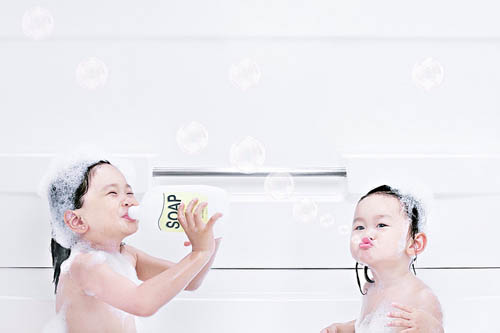 Yesterday, I mentioned a little story involving the f-word and my daughter Olive. When we first moved to France and the kids started school, they didn’t speak a word of French. Olive told me that on one of her first days of school, there was a classmate trying to show off his English. So he approached her and in a thick French accent, with a happy, welcoming grin on his face, said, “You speak English? F— you!”

I know it’s hard to imagine, but his intention was completely friendly! And he stood there happy to make her acquaintance. 9-year-old Olive was shocked, but thankfully, mature enough to know he didn’t intend any offense and was able to laugh about it.

Growing up, swearing was a BIG no-no at my house. Saying bad words, or talking back, meant getting my mouth washed out with a bar of soap! (And it wasn’t at all as charming as the photo at top.) I did some swearing in middle school when I was feeling feisty, but mostly, I haven’t been a swearer.

Moving to New York changed my whole view of swearing. I would hear the f-word many, many times a day on the street, on the train, and in the office. In New York, it’s kind of like saying shoot, or crap. Unless you’re saying it in an angry voice, or accompanying it with hand gestures, it doesn’t always carry a lot of weight like it might in my hometown, or in Colorado, or other places I’ve lived. And I can tell you, that even though I wasn’t swearing myself, my ears eventually adjusted and it truly didn’t bother me when I would hear the commonly used bad words.

Moving to France has made swear words even less toxic. I think because I was reminded that it’s such a cultural thing. In fact, I can hear a string of British swears or French swears and they don’t make me even slightly uncomfortable. Because they are absolutely meaningless to my ears!

Tell me, friends. What are the swearing rules at your house? Did you swear before you had kids? Do you swear around them still? Did your parents ever wash your mouth out with soap?

P.S. — Oddly, after not swearing for most of my adult life, I found myself letting curse words slip now and again over the last couple of years. Except the f-word. It still makes me blush!

65 thoughts on “Wash Your Mouth Out”