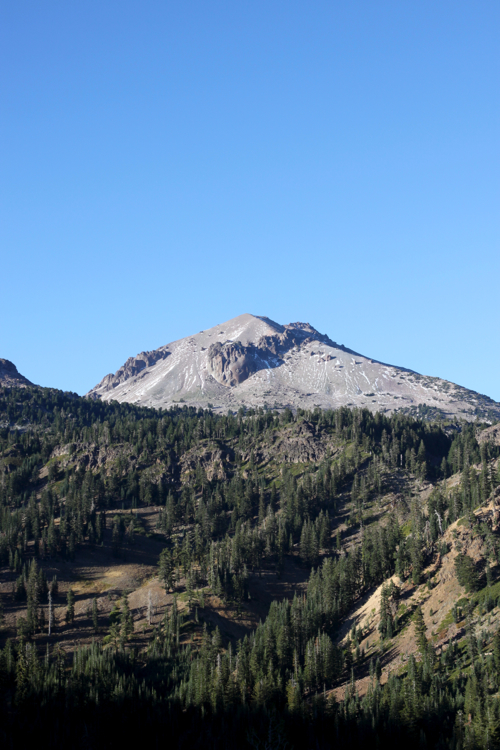 Photos and text by Gabrielle. This content was created in partnership with Ford to help make creativity a part of every drive.

The second fun thing is Ford lent us a new 2016 Explorer for our adventure. It’s a six seater, and we’re a family of 8, so at first I was like aw shucks, I don’t think we can make it work. But then we found out Maude had a cross-country commitment that weekend, and Ralph had a video job that weekend, and they both needed to stay home. At which point we said, “Well then heck yes! Let’s try the Explorer!”

So off we went on a little weekend adventure. And now I’ll hand the report to Olive Blair: 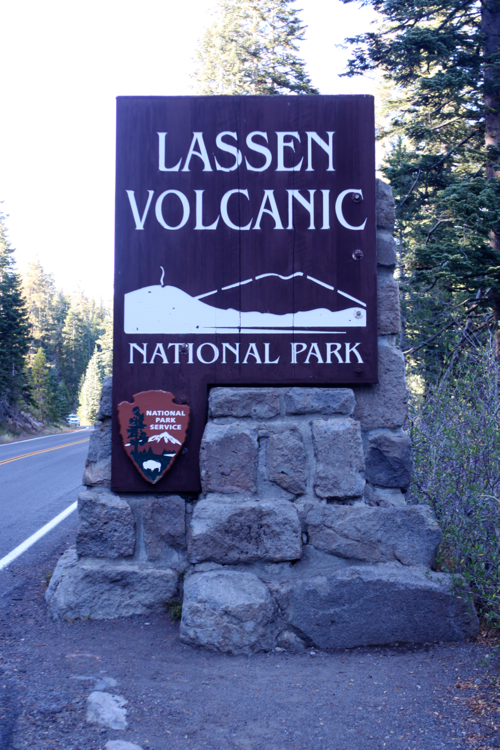 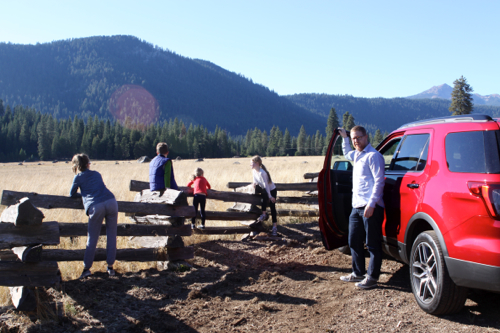 Olive Blair here. I’m 14 years old and I’ve never been a guest blogger before. But I am happy to tell you all about the first day of our trip!

We got to Lassen National Park after about a 4-hour drive from Oakland. We put all our suitcases in our hotel room and headed straight for the park. 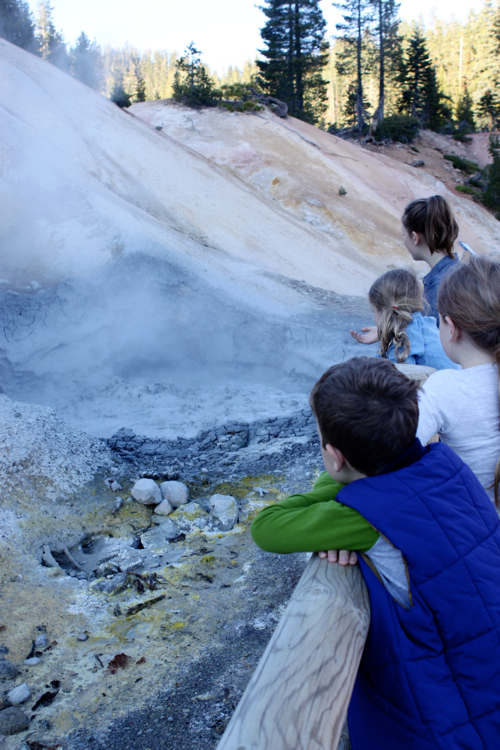 Once we got there, we stopped at the visitor center but it was closed, so we decided to do some exploring on our own. First we found this hot spot called Sulphur Works. It was really cool. It had bubbling mud and it smelled like eggs. We just sat and stared at it for like 10 minutes because it was so cool. My mom shared a video of the bubbling here.

We later found out the mud bubbles because of magma six miles below the surface. 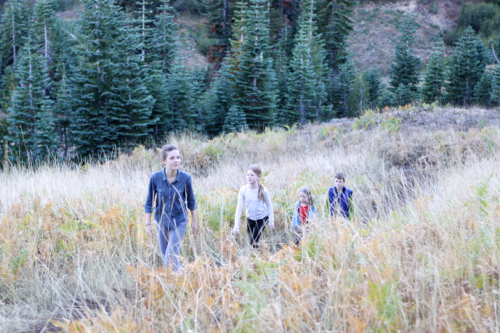 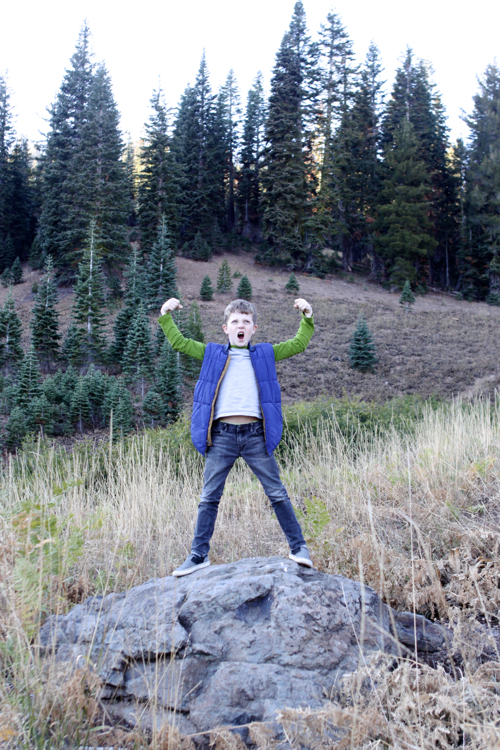 We also did a little hiking in that area. You’ll note from Oscar’s stance that hiking on volcanos makes you feel pretty unstoppable!! 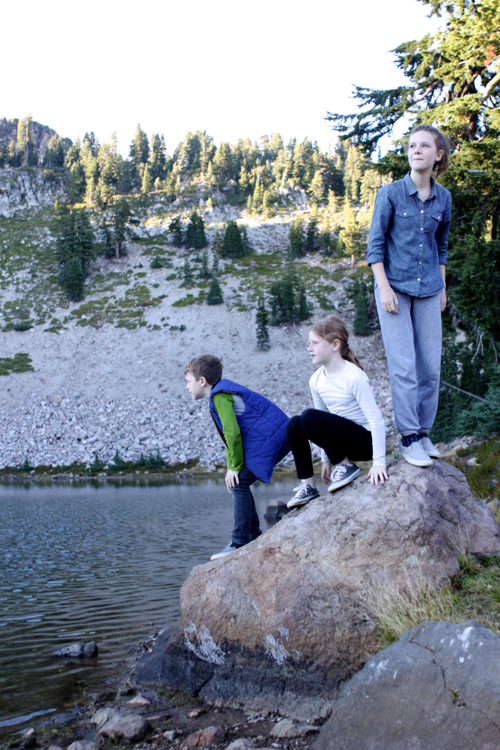 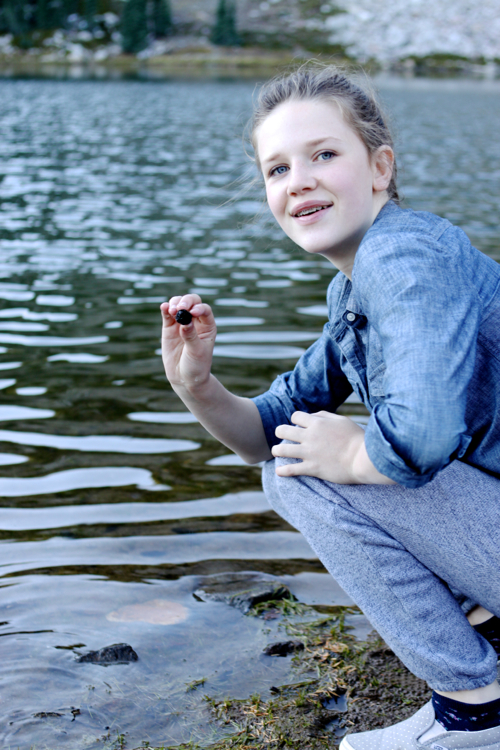 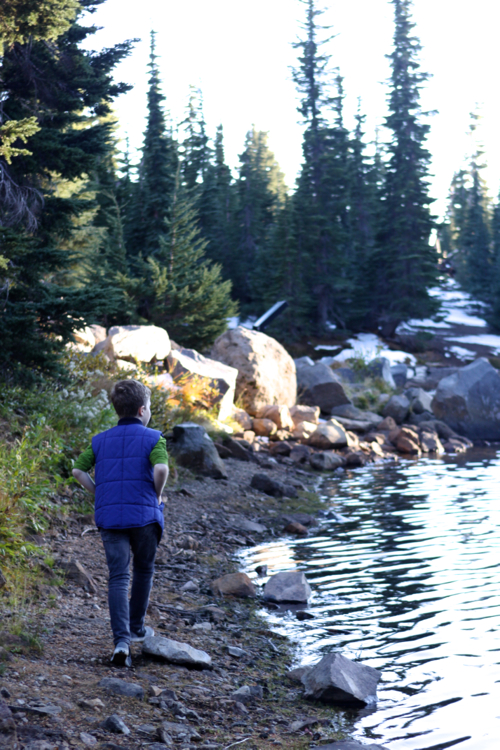 After the Sulpher Works, we jumped back in the car, and just a few minutes later we reached this amazing place called Emerald Lake.

Emerald Lake was incredible. It was really green and the water was really cold. We brought swimsuits but felt like it was too late to get in. So we hiked around the edges instead. 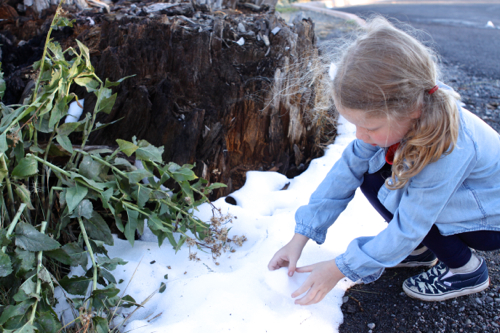 Oh and there was snow on the ground! So we started having snowball fights. (The temperature wasn’t really cold while we were there, but the snow was still there from an earlier storm.) 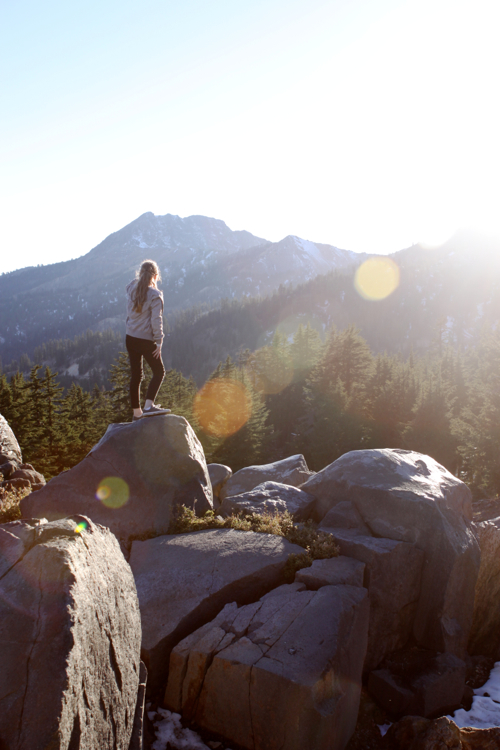 Then, we drove a little further and pulled in to a place where we could climb around rocks and take in the views. 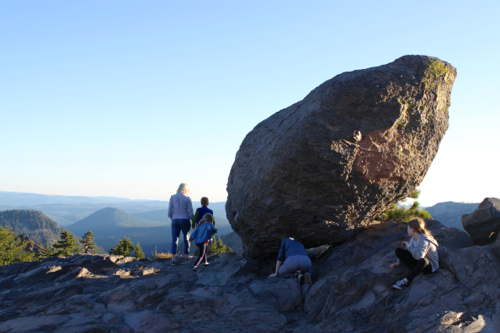 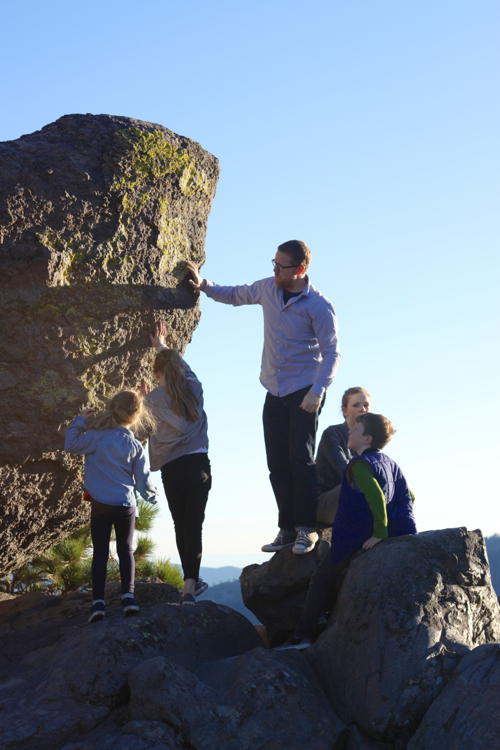 There was this really massive rock there, and it was just balancing on this other smaller piece of rock. It looked fake, like someone had set it up. We could climb all over it — well, we tried to climb all over it. : ) We learned it was a called a Glacial Erratic. 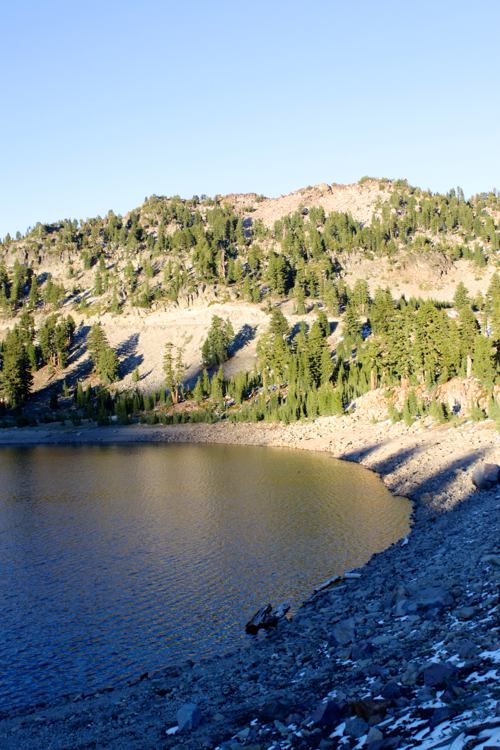 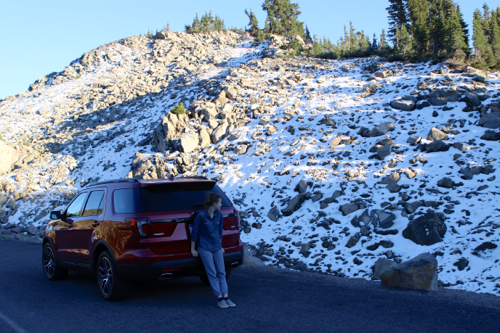 There was still enough sun to do more exploring, so we drove a little bit further and found another lake. It’s called Lake Helen. It’s a glacial lake and there were lots of snowy hills nearby. 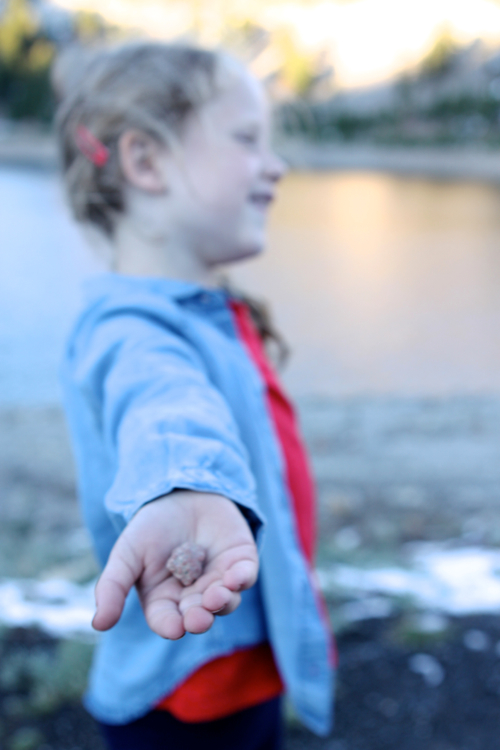 June kept showing us pink rocks she found by the shore. 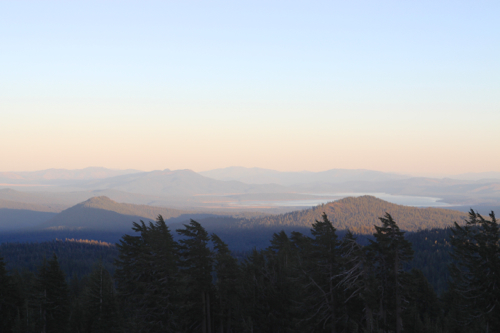 The views inside the park were incredible! You could see for miles and miles!

The picture at the top of this post is Lassen Peak. It’s a volcano. It doesn’t look very big, but when it blew up 100 years ago in 1915, it shot ash and rock 7 miles into the air!!! I also learned there are 4 types of volcanos, and Lassen Volcanic National Park has all 4 kinds. 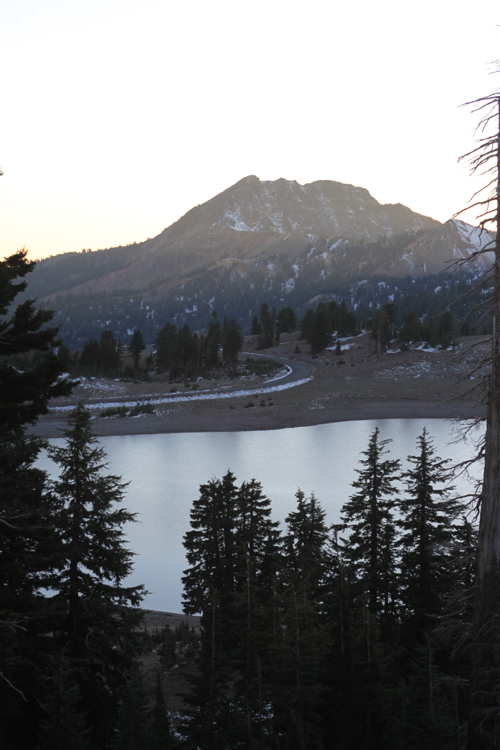 Eventually, it was getting dark, so we drove back in time to get something to eat. I still can’t believe we did all of that before dinner! 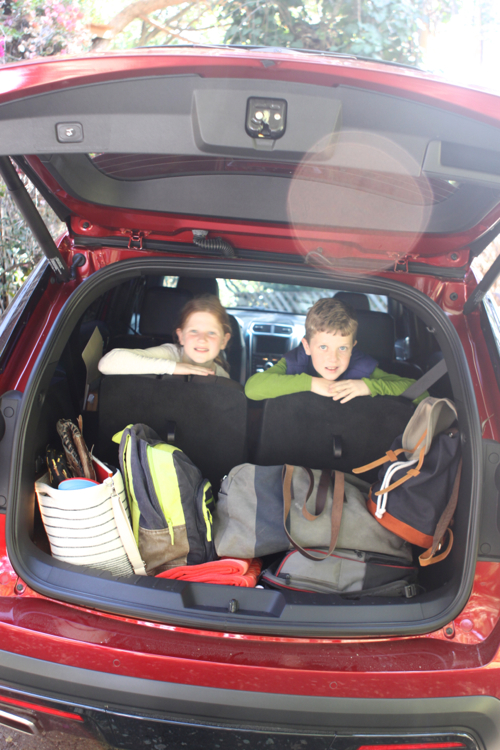 Thanks for the report, Olive! I love remembering the trip through your eyes. Gosh I love road trips with my kids! A report of Day Two of our trip — featuring Oscar — will come tomorrow.

P.S. — If you’re curious about the Explorer, there were two driving features that we especially loved — one is that the car automatically senses traffic and when you are in cruise control, it will slow or speed up on its own as needed. This is awesome! And it made us even more excited for a future of self-driving cars. Hah! The second thing is that the side mirrors have a bright little light that turns on if anything is in your blind spot. So handy! Best new safety feature I can conceive of.

26 thoughts on “Volcano Adventure! Day One”