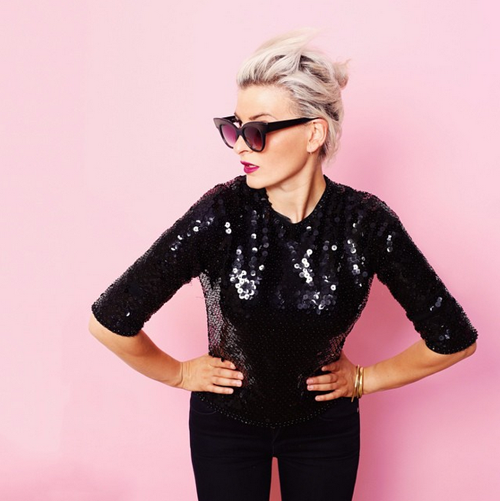 By Gabrielle. Image via Geronimo Balloons.

In June, I discussed my goal of establishing better or more “grownup” grooming habits this year — like consistently having a proper manicure and taking the time to make sure my hair looks good each morning (instead of throwing it in a messy top knot as I rush out the door, or working in my pjs and ignoring it altogether).

I also discussed wanting to experiment with my identity and how it ties into physical appearance. I envisioned my hairstyle changing each month in big ways, trying out clothing styles that are new to me, and becoming confident about applying various makeup looks.

And then, I wanted to discuss everything with you. What I was learning. How the changes affected (or didn’t affect) my behavior. The concept of identity and how it ties into physical appearance.

I went into the whole thing with a big picture in my head, but oh my goodness, the plan has not proceeded on track at all. In fact, I think I’ve actually been substantially worse at grooming since June than I was during the previous year. From June till now (and still continuing), I allowed my travel and project schedule to ramp up in a crazy way, and physical appearance has taken a back seat to pretty much everything else. It’s like I set out to go in one direction, and have ended up in the completely opposite direction.

I probably knew that about myself, but had never really admitted it — outside of basic upkeep like daily showers and trimming my nails, beauty tasks can quickly fall the bottom of my priority list.

I don’t think I really considered how much time exploring this grooming + identity idea would take. I suppose I was imagining fitting it in around my other projects, but really, it’s a major project itself. And to carry it out the way I originally thought of it, would mean clearing some things from my schedule (for example, finishing my book — I just received chapter design samples today!), to make room for it.

But the thing is, I still really want to do this. I still like the idea, I still look forward to the discussions, and I haven’t given up yet. I’ve even made some small progress. You may remember I had bangs cut — a small thing, but a fun change. We discussed at-home beauty tasks versus hiring out. I’ve been growing out my roots in preparation for a big color change — I now have a full inch of salt & pepper growing in. I’ve also had a bleach test done on a strand of my hair. It’s little. But it’s something. So, as some of my deadlines wrap up, I’m going to try and focus on grooming/identity stuff and see what happens.

I’d love to hear: where do “beauty” tasks fall on your priority list? Are you diligent about scheduling hair appointments? Do you make time in your morning get-ready routine for makeup? If you have a project deadline you’re up against, does non-essential grooming fall to the wayside? And have you ever made a goal, and then gotten worse instead of better at it? I’d love to hear your stories!

P.S. — The bleach test is because I want to try really white blonde, similar to Jihan’s super cool hair do. Have you ever made a drastic change like that?

72 thoughts on “Turns Out Beauty Tasks Are My Last Priority”