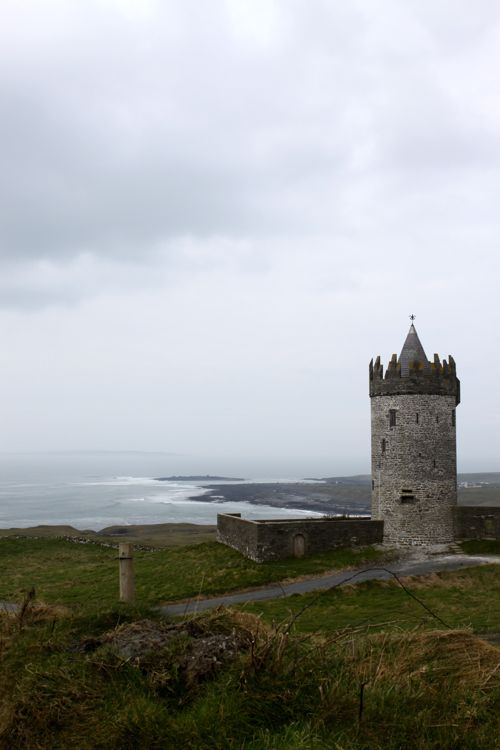 Text and images by Gabrielle.

For starters, packing is easier. There are no weight restrictions and no checked vs. carry on bag decisions. You can stuff last minute items into the trunk and deal with them later. You can bring extra coats and boots that would take up too much room in luggage.

Plus, you get to skip the airport! I find airports in general to be stressful places, and with a big family, the stress is multiplied. The getting there early, but not so early that you’ve used up all your boredom fighters before boarding. Making it through security with your kids — with all the jackets, boarding passes, shoes, passports, belts, and teddy bears intact. And hoping the kids will behave well on the airplane and be mindful of other passengers. (In the car, if they throw a tantrum, oh well.) Going to the airport sometimes feels like we’re adding extra hours to our trip before it really starts. 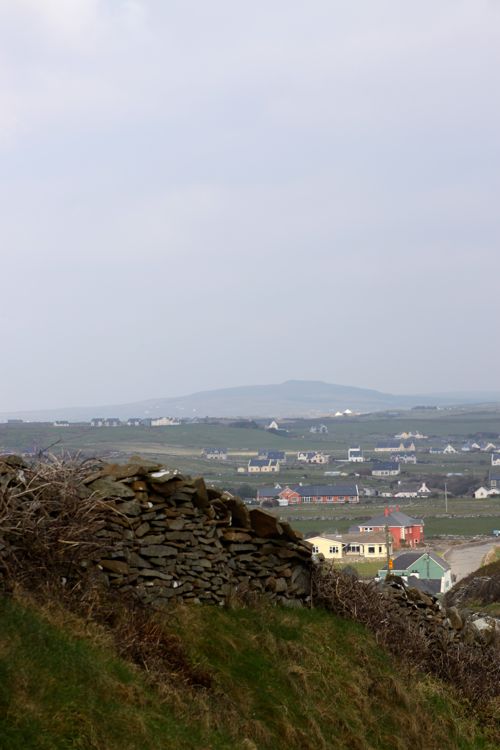 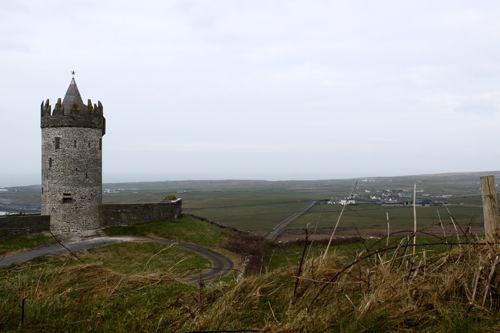 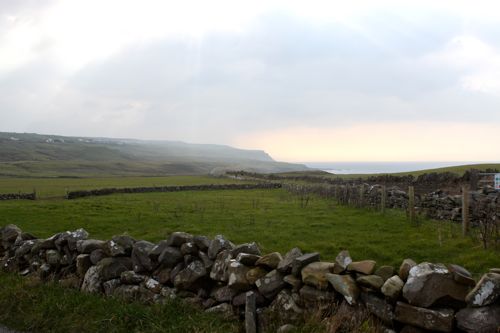 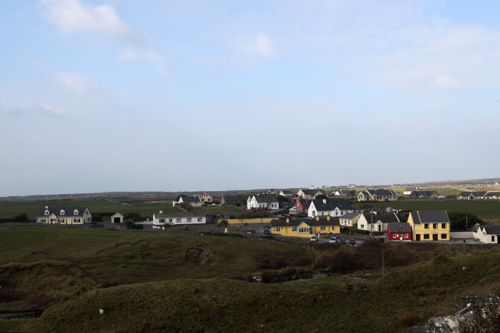 In contrast, plane trips require more planning for a big family — last-minute plane trips for 8 just aren’t very realistic. And yet. Plane trips cover so much ground so quickly! (And we already have our next family plane trip scheduled for May. Hah!)

For Ireland, in theory we could have flown, but because we were putting the trip together last-minute, driving made the most sense. And it turns out it was a good thing. Because our particular trip definitely required a car! 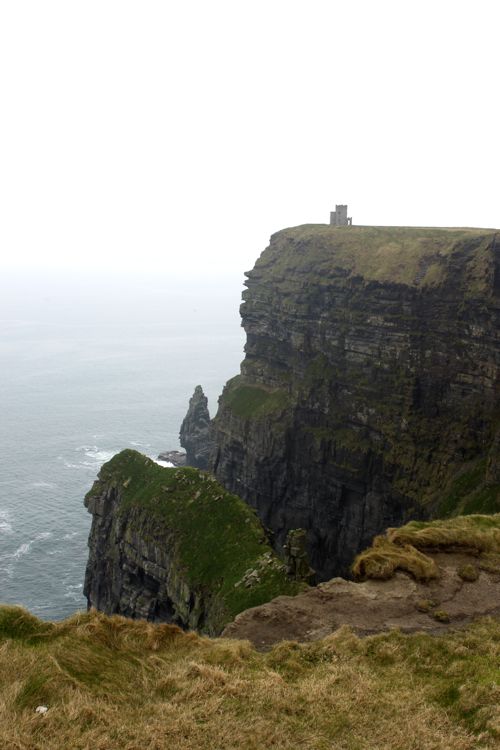 Our impressions of Ireland:

– Every one is so friendly! That may seem like a generic compliment, but I don’t mean it to be. We were just so amazed at how open and talkative and welcoming the people we interacted with were. They weren’t reserved or pretentious at all and didn’t seem wary of strangers in any way. We have GPS, but we actively sought out occasions to ask for directions, and were rewarded with friendly conversations every time.

– It struck me that Ireland would make the perfect First European Travel Experience for an American. The language is English, but just enough different to keep you on your toes. You’ll be able to easily understand the road signs — but also see the words in Gaelic, plus, you’ll drive on the left side of the road which feels like an adventure. You’ll feel like it’s totally foreign, but in comparison to other European countries, it actually feels familiar to an American (at least it felt that way to our family). 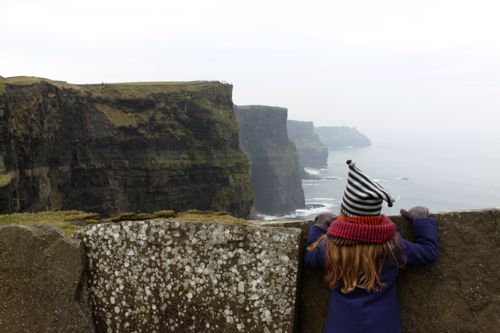 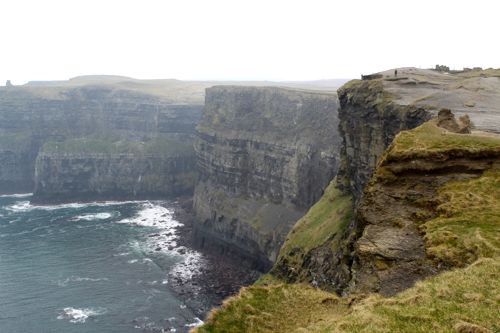 – Most of our travels have focused on a city. In England, our first trip was about London. In Spain, we spent time in Barcelona. In Italy, we saw Rome and Venice as a family and Florence as a couple. But in Ireland, instead of focusing on a city, the guide books basically recommend seeing the whole country!

In fact, instead of booking a hotel for a week, many visitors will stay in a new place every night or every other night as they make their way from one location to the next.

We did not understand this at all until we were on the trip! Since it was a last-minute trip we essentially did no research ahead of time and only started reading guidebooks (and reading your brilliant recommendations!) after we were on the boat to Ireland and had already booked our hotel in Cork for our entire stay. : )

So each day, we would explore or drive somewhere, but we would need to leave time enough to get back to the hotel in Cork. 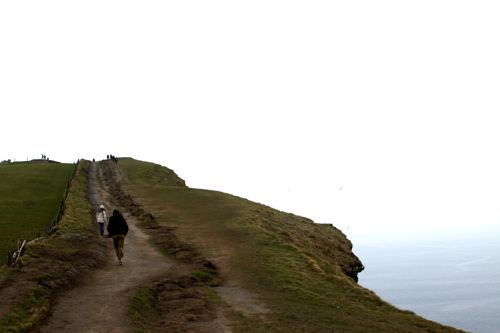 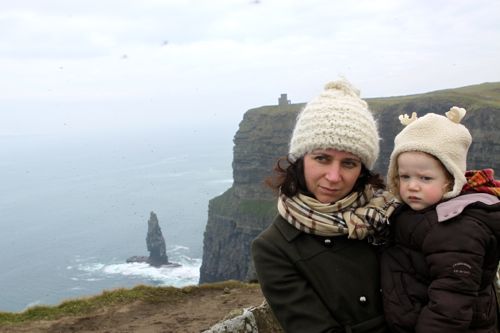 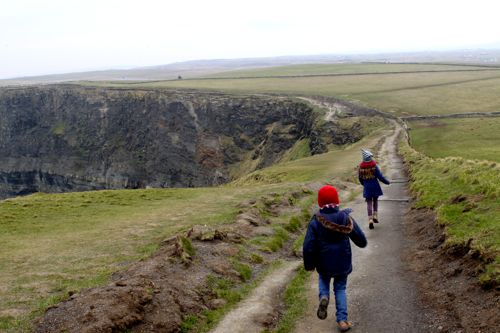 – You drive. A lot. Even if it looks really close on the map, on little Irish country roads, it’s going to take you a bit to get there. But happily, the drive will very likely be picturesque and green and charming at every turn.

– We were definitely there during off-season. That has its advantages and disadvantages. In general the weather was great and the touristy spots were empty. I felt like we had the Cliffs of Moher practically to ourselves! The downside is that on one day it was so cold we really had to talk ourselves into going outside. And some of the most recommended sites weren’t available to us — for example, we couldn’t find a boat that could take us to famed Skellig Michael island. 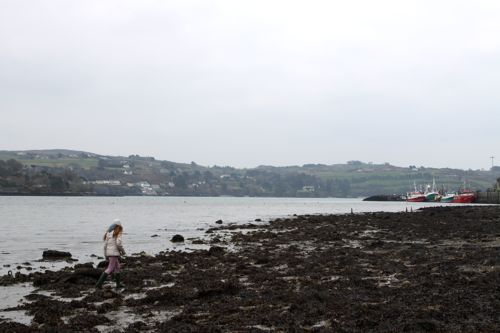 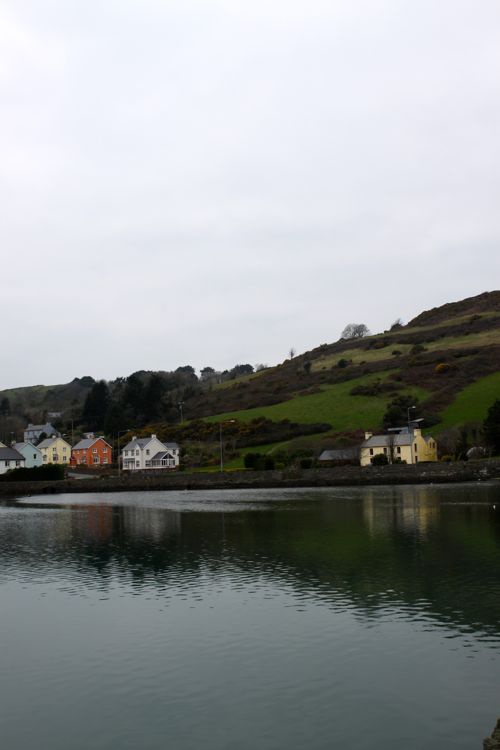 Our favorite parts of the trip:

– Blarney Castle. The famed Blarney stone is such a tourist draw, that a couple of guidebooks discouraged visiting because it’s so cliché. But this was a moment when off-season was decisively positive. We had the castle to ourselves (which for sure made a huge difference), and we loved kissing the Blarney stone!

I think it’s especially memorable for kids because it involves a simple, distinctive, physical act. In order to kiss the Blarney stone you have to climb to the top of the castle where you’ll find the stone in open air at the very top. Then you lie on your back on the stone floor and lean over a ledge backwards until you’re head is upside down and your lips reach the stone. The ledge opens onto the ground which is 4 stories below! (This is me mid-kiss — see the sidewalk far below?) The ledge is semi-protected so you can’t easily fall, and there was a kind man assisting the tourists and keeping them safe, so it’s not actually too dangerous — we let everyone kiss the stone but June — but it feels scary and makes you feel brave when you’ve done it. The castle offers great views and we loved exploring the grounds. We could have spent several hours there easily.

Side note: For some reason, I’d always thought the Blarney Stone was supposed to give good luck. But instead, it gives the Gift of Gab! Which I’m pretty sure I already have. : )

– We loved spending time in Cork. Downtown Cork is filled with charming shops and buildings. We loved exploring the English Market, having a big family dinner at Market Lane, and mugs of the famous hot cocoa at O’Connaill’s — we ordered 8 different kinds of hot cocoa and traded tastes!

– We were so tempted by all the woolen mills we encountered. They’re filled with cozy woolen goods — mittens and hats and sweaters and blankets. I wanted one of everything! We ended up with a beautiful wool herringbone weave blanket as a souvenir. (We hope to keep it in our someday cottage.)

– One morning, we left the hotel early and drove to the Cliffs or Moher. Oh. They are magnificent! And it’s just stunning how you can walk right along the edges. It looks like the whole world just ends there. We spent a looonnng time exploring there. It was for sure my favorite stop on the trip.

– After we’d had our fill of the cliffs, we drove to nearby Doolin and enjoyed a wonderful meal at the local pub. Driving into Doolin made me super happy. It’s what I imagined Ireland would look like. And it did! 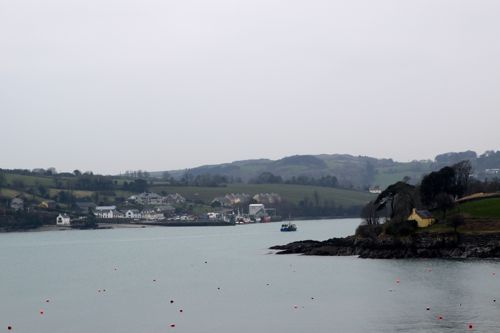 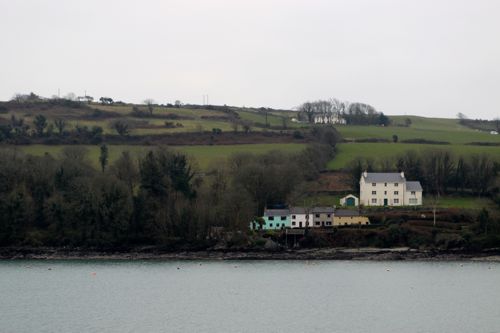 – The next day, we were worn out of being in the car, so we didn’t want to drive too far. We had been planning on driving to the Ring of Kerry or Dingle Peninsula , but instead, we followed a reader’s recommendation to do an alternate route much closer to Cork. And it was lovely! We drove from Kinsale to Glandore to Skibbereen and then back to Cork.

– Near Glandore, we stopped at the Drombeg Stone Circle. At this stop it didn’t just feel like we had the place to ourselves, we in fact were the only ones there. And it felt magical and unbelievable to see the kids playing hide-and-seek among the stones. Climbing on them. Running through them. The stones have been there since 1100 B.C.!

– Lastly, we really enjoyed the ferry trip both ways. It had strong wifi so I could work. There was a movie theatre showing The Hobbit and Wreck it Ralph. It was nice to be able to unwind and not have to drive for a while. 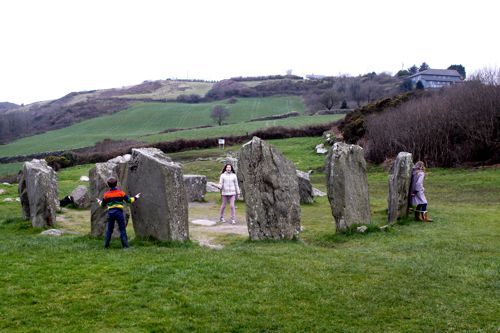 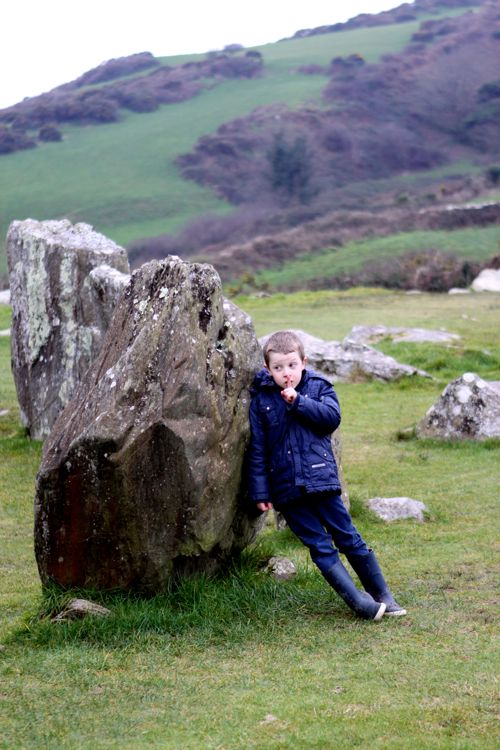 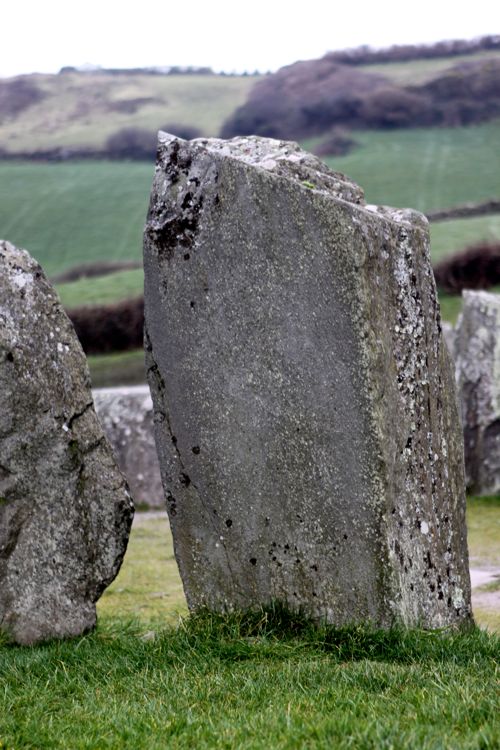 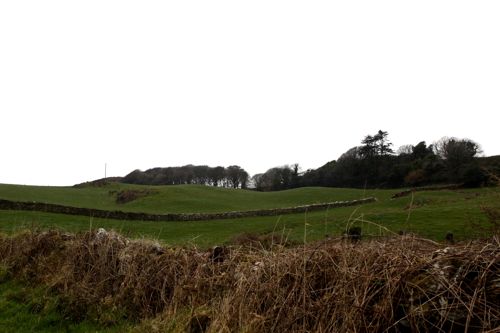 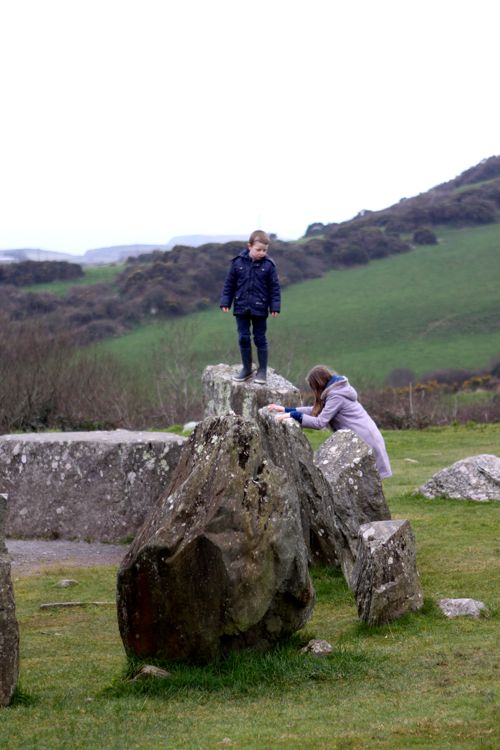 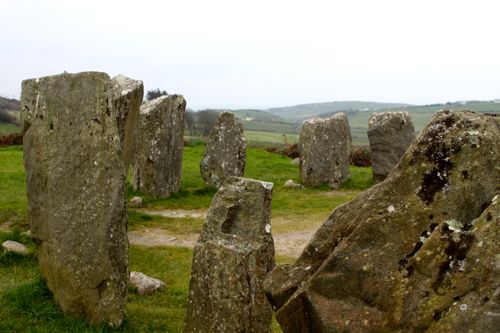 We loved our visit to Ireland! So much so that before we’d reached home, we had already started making of wish list of places in Ireland we want to visit next.

What do you think? Did we miss your favorite spot? Do our photos make you want to grab a plane ticket?

70 thoughts on “Road trips vs. Plane trips. Plus Ireland Pics!”