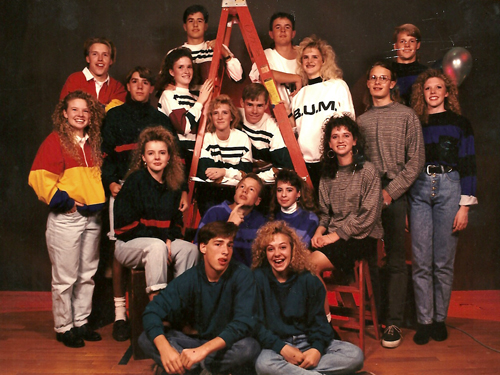 By Gabrielle. Image is from my high school Sadie Hawkins dance — do you like my scrunchie?

A few weeks ago, I read an article in New York Magazine titled “Why You Truly Never Leave High School” by Jennifer Senior. I confess, I was sort of rolling my eyes as I started reading, because somehow I managed to make it through high school fairly unscathed.

But as I kept reading — and realized how the topics being discussed were about to affect my own children (two of mine will be in high school when to we return to U.S. schools next fall) — I suddenly wanted to share the fascinating article with every one I know.

Some of the ideas that stood out to me:

This is true for the good feelings, but also for the bad feelings, like fear. I keep reminding myself of this when my teens are upset — their reactions to problems aren’t necessarily proportionate to the actual problem.

“Until the Great Depression, the majority of American adolescents didn’t even graduate from high school. Once kids hit their teen years, they did a variety of things: farmed, helped run the home, earned a regular wage. Before the banning of child labor, they worked in factories and textile mills and mines. All were different roads to adulthood; many were undesirable, if not outright Dickensian. But these disparate paths did arguably have one virtue in common: They placed adolescent children alongside adults.”

The article goes on to explain the harm that comes by having all these intense adolescents creating their own cultures and subcultures in a high school. It turns out that how you are labeled in high school, partly because you don’t get to control that label, will continue to affect you and can become a shame trigger for you as an adult.

“It’s also abundantly, poignantly clear that during puberty, kids have absolutely no clue how to assess character or read the behavior of others. In 2005, the sociologist Koji Ueno looked at one of the largest samples of adolescents in the United States, and found that only 37 percent of their friendships were reciprocal—meaning that when respondents were asked to name their closest friends, the results were mutual only 37 percent of the time. One could argue that this heartbreaking statistic is just further proof that high school is a time of unrequited longings. But these statistics also suggest that teenagers cannot tell when they are being rejected (Hey, guys, wait for me!) or even accepted (I thought you hated me). So much of what they think they know about others’ opinions of them is plain wrong.”

Doesn’t that just break your heart? Teenagers literally can not see the world clearly.

At one point the article surmises:

P.S. — I also like the article because it heavily references Brene Brown’s work. She’s amazing.