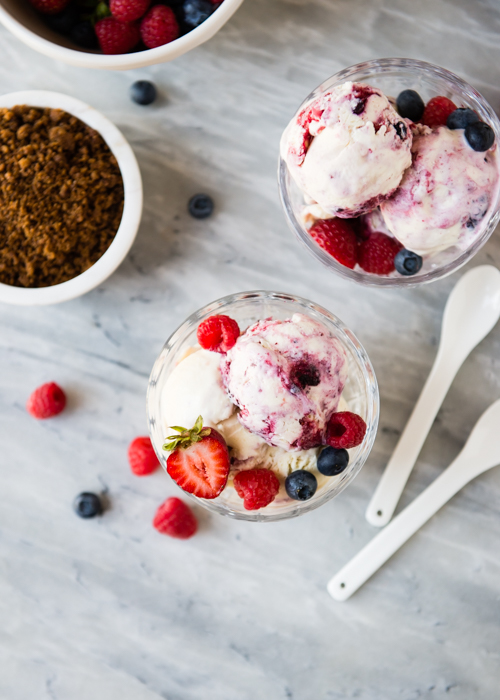 Something we miss when we’re in France is American ice cream. There’s no question France is very good at desserts, in fact, France is very possibly the reigning dessert country in the world. But I confess, I much prefer American ice cream to French ice cream. This is mysterious to me, especially since I live in Normandy, the famed dairy region of the country. The dairy products here are insanely good. The cheese is legendary. The yogurt aisle is epic. But oddly, I find the cartons of ice cream in the grocery store freezer ho-hum (and even more oddly, they don’t really do chocolate milk — but that’s a topic for another day). 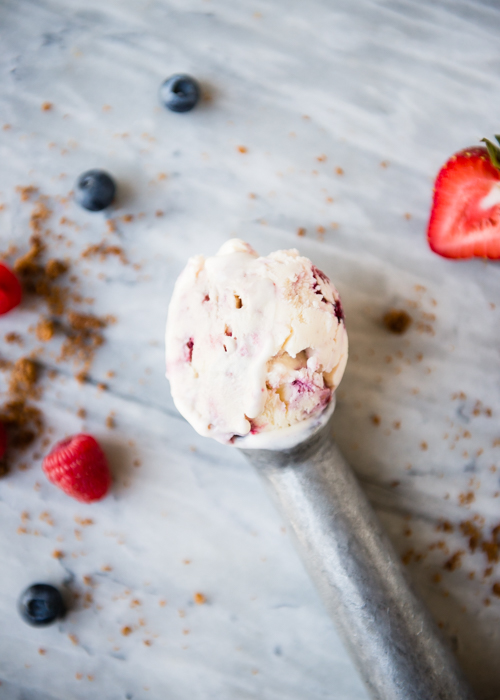 All this to say, we’ve had amazing summer weather this last week and I found myself craving ice cream. I’m happy to make it myself, but we don’t have an ice cream maker here. So I asked Lindsey for a no-churn option — a freezer recipe that doesn’t require a machine. And boy, did she offer up a stunner. Don’t you just want to lick the screen? I can not wait to make this! 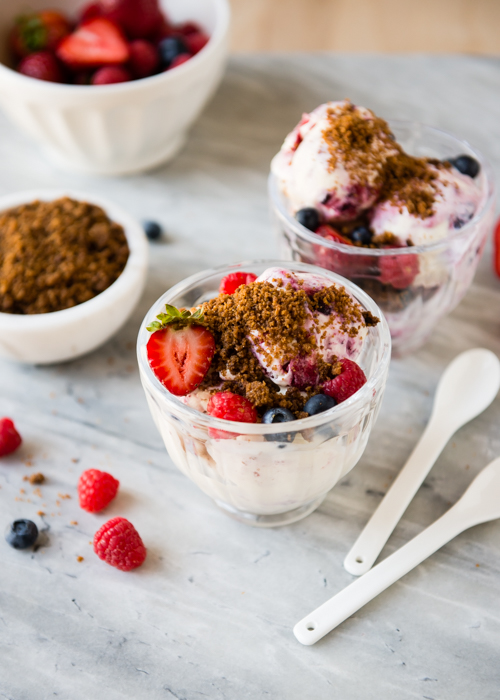 A related fun fact: Did you know that July is National Ice Cream Month? (At our house, we celebrate this every month.) So now is the perfect time to try your hand at homemade ice cream. Lindsey promises this is “hands-down one of the easiest and tastiest recipes you can make”. Let’s do this! 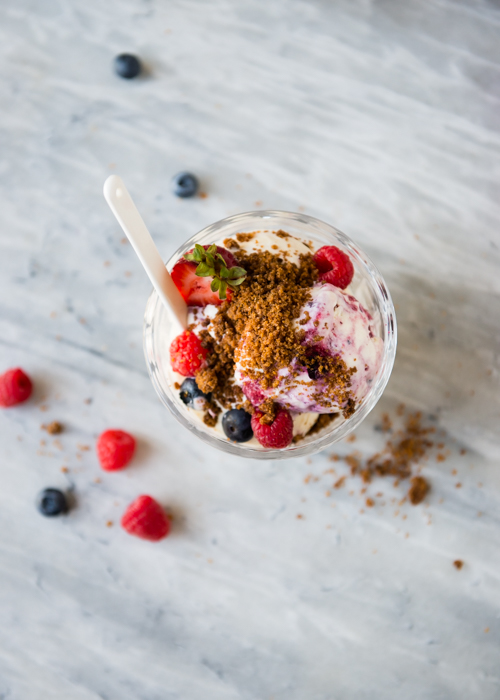 Friends, let’s just cut right to the chase. Ice cream is one of the greatest desserts of all time. It seems like everyone has jumped on the homemade ice cream bandwagon. It’s not just for family reunions anymore! Plus, the homemade ice cream trend isn’t going away, and I’m not one bit sad about that. I bought my first Cuisinart ice cream maker almost 15 years ago and it’s still going strong!

There’s definitely no hate for store-bought ice cream. Not with those super yummy brands coming out with all kinds of crazy delicious flavor combos. But it’s so, so much fun to come up your own flavors at home too. This No-Churn Berry Ripple Cheesecake Ice Cream is hands-down one of the easiest and tastiest recipes you can make. You don’t need an ice cream maker, hence the “no-churn part.” If you’ve got a freezer, you’re in business. 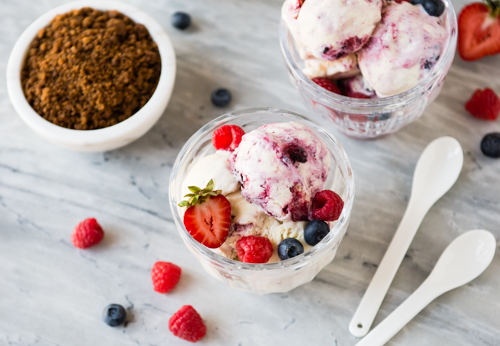 I came up with this recipe a long, long time ago (in blog years, at least) and based it on an old family recipe for no-bake cheesecake. No-bake. No-churn. There’s kind of a theme here. I bet you anything if you make this and are nice enough to share with your friends, they will bow down to you. It’s that kind of recipe. Simple to make, tastes like a million bucks. I will warn you, though, that it is on the rich side. There aren’t any eggs like a traditional custard-based ice cream. It gets the creamy richness from cream cheese and sweetened condensed milk.

Oh, man. I can already tell you it’s going to be love at first bite! 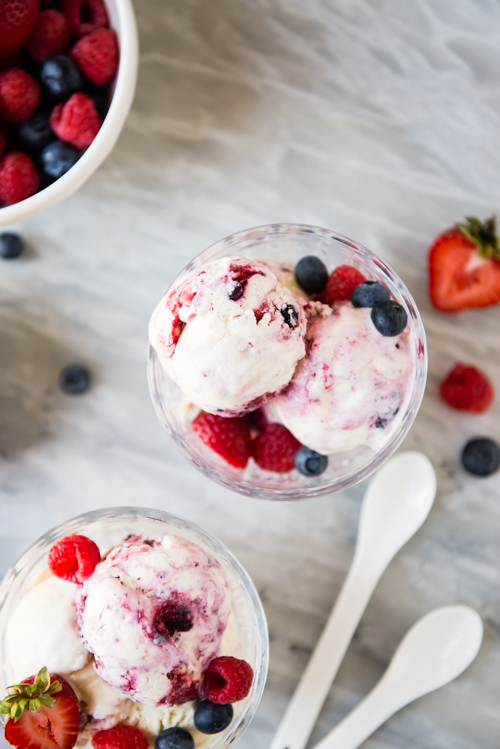 When you churn ice cream, it incorporates air that is trapped by the fat in the cream. This can also be accomplished by folding whipped cream into the ice cream base and then freezing it. And with this recipe, you don’t have to take the bowl out and stir or whisk it like you would with other no-churn ice cream recipes. So you make it, place in the freezer, and a few hours later it’s ready to be scooped up and enjoyed. 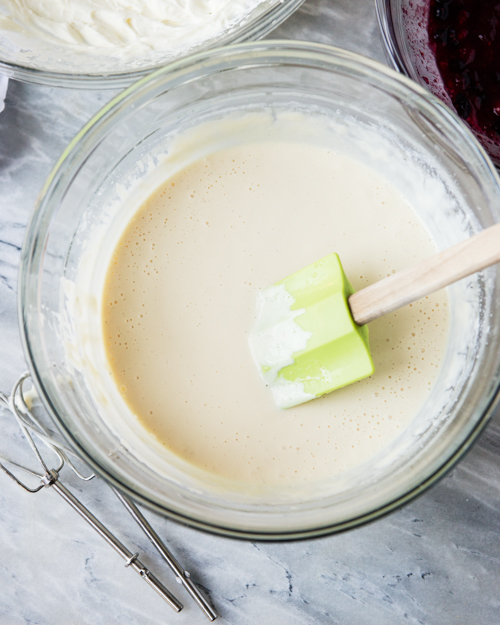 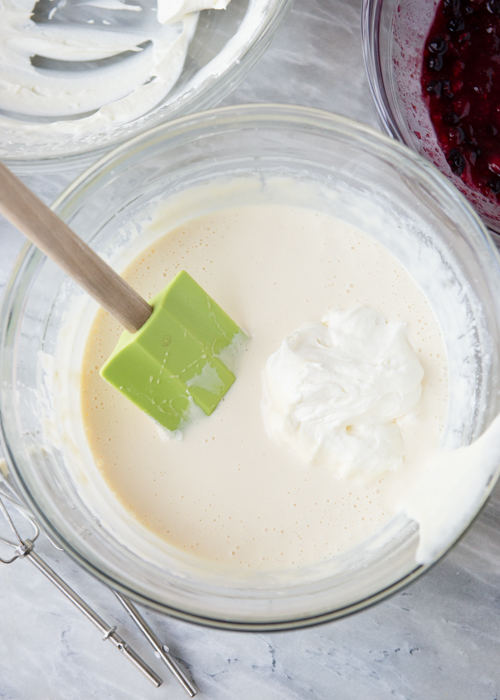 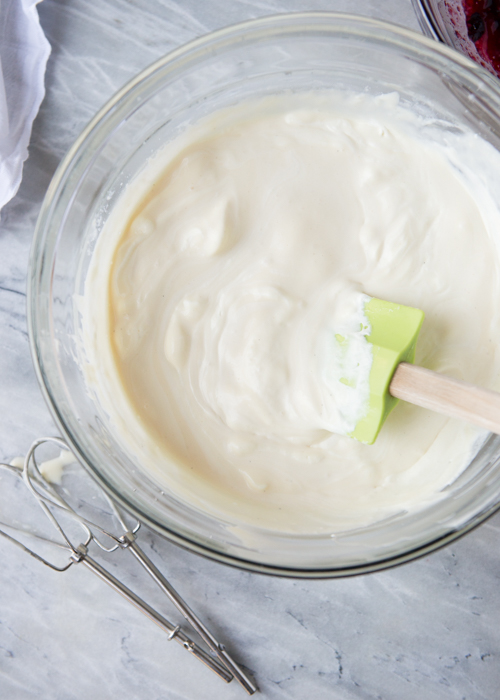 The berry ripple is one of the best parts, in my opinion. 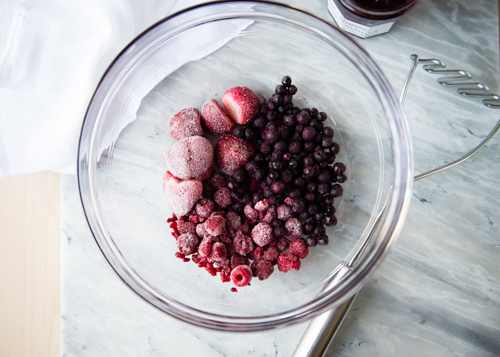 I’ve tweaked my original recipe a little bit to make the berry ripple just right. I combine fresh or frozen berries with a little jam instead of plain sugar. Jam has pectin, which in addition to the sugar, helps keep the sauce from freezing rock solid. 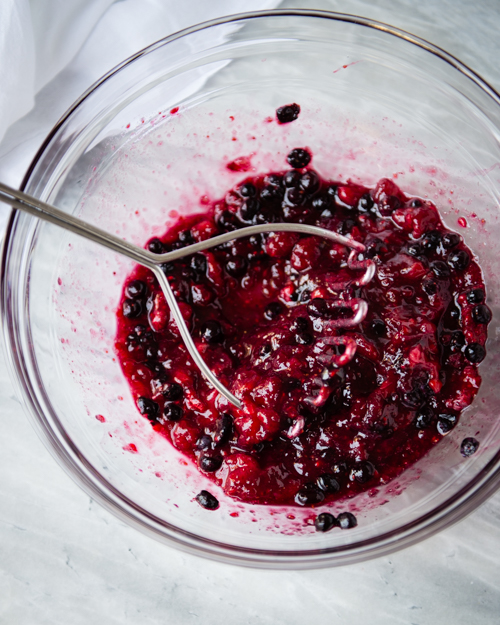 The texture of the berry ripple ends up being very much like the old fashioned cheesecake ice cream you’d get at the ice cream parlor. That was always my first pick on a sugar cone, please. : ) 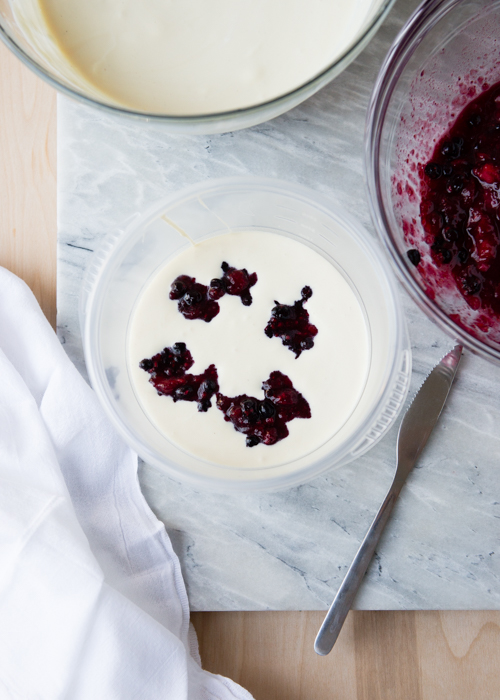 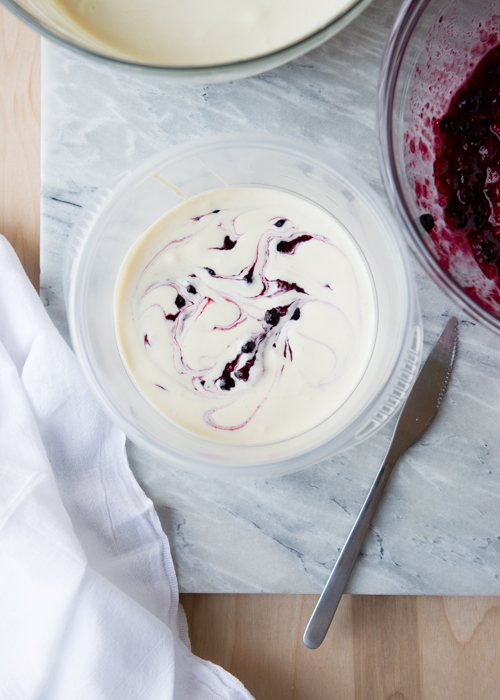 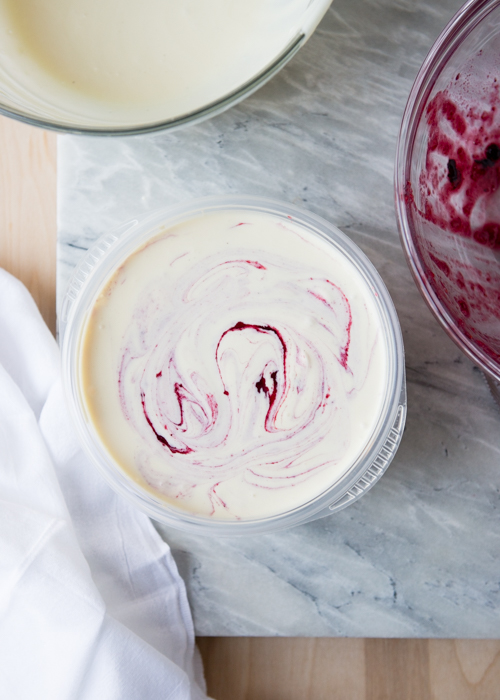 It’s easy enough to get the fun ripples by layering the ice cream mixture and dollops of berries, then using the tip of a knife to swirl them together. I usually do 1/4 of the ice cream with 1/4 of the berry mixture, then repeat all the layers ending with the berries on the tippy top. 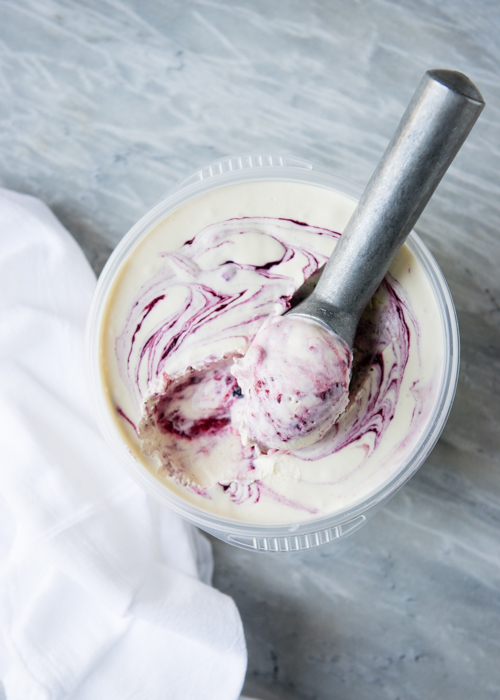 You can freeze this in any freezer-proof container. BPA-free plastic is nice, especially if you’re going for longer term storage. I also like loaf pans quite a lot and they are pretty if you’re serving this at a party to a crowd. 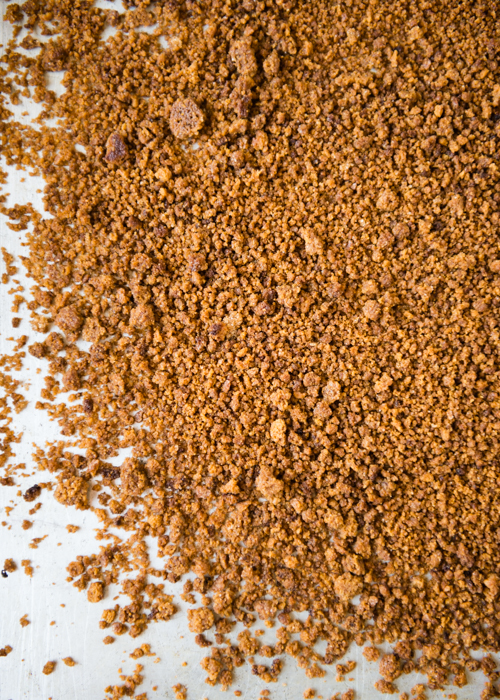 The icing on the cake…er, ice cream, is the graham cracker crumble for the top. Did your mom ever let you sample the graham cracker crust mixture when you were a kid? No? Mine neither. I’d usually eat the filling and enjoy the crust all on its own. I think I could just sit down with a bowl of that stuff and be in heaven. Sigh.

So, that’s what goes on top. It is cheesecake after all! AND you can even sprinkle it between the layers as you add the berry ripple to the cheesecake base. It stays relatively crunchy, or you can sprinkle it on top. Either way, it sort of makes this whole thing. 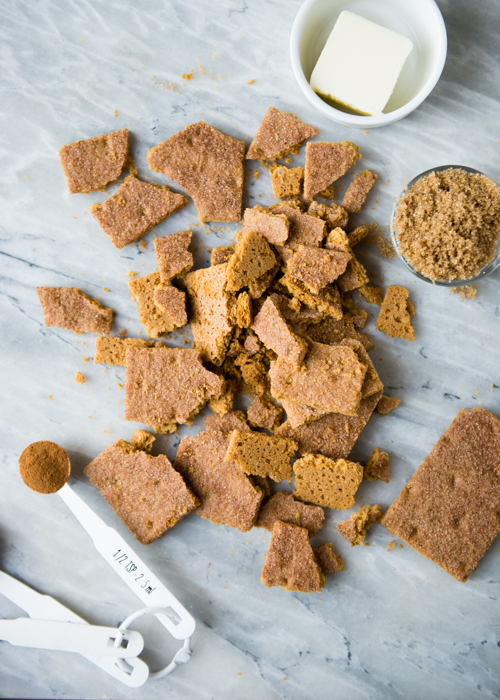 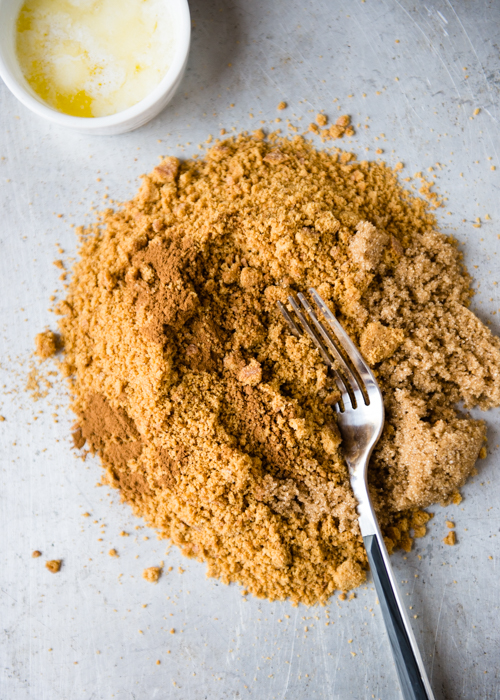 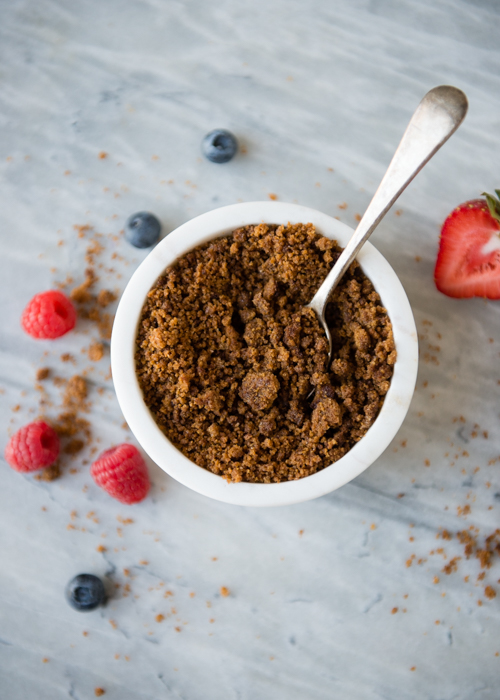 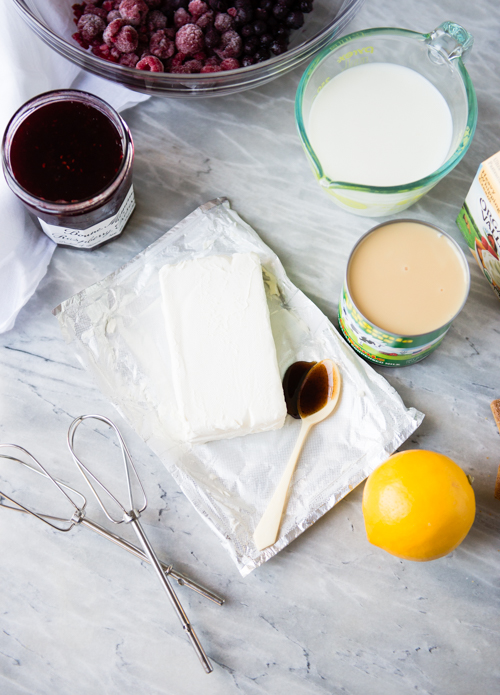 Berry Ripple Instructions:
Place the berries in a bowl and stir in the seedless jam. Mash the berries a bit with the back of a spoon or fork, and let sit until the berries release some of their juices. Refrigerate until ready to use.

Ice Cream Instructions:
Let cream cheese soften slightly at room temperature. Place in a large mixing bowl and beat until creamy with an electric mixer. Slowly add the sweetened condensed milk, while beating on low speed. Add the whole milk, lemon juice, and vanilla extract. Cover the bowl and chill for about an hour, or until very cold.

Pour about 1/4 of the mixture into a freezer-proof container with a tight-fitting lid.

To serve, scoop into bowls and top with a sprinkle of the graham cracker crumble.

Graham Cracker Topping Instructions:
Preheat oven broiler to low and move oven rack so it is about 4-5″ away from the broiler. Have ready a shallow baking dish or rimmed baking sheet.

Combine the graham cracker crumbs, brown sugar, and cinnamon in a mixing bowl. Add the melted butter. Mix until well-combined. Turn the mixture into the baking dish or baking sheet and spread into an even layer. (No need to press it down.) Broil for 3-5 minutes, keeping a close eye on the crumbs, until they turn golden and crispy. If the edges start to brown more quickly than the center, give the crumbs a little stir Remove from oven and let cool completely before serving.

*Be sure to use whole milk, or substitute half and half, whipping or heavy cream. Higher fat content means it will be creamy and not icy. 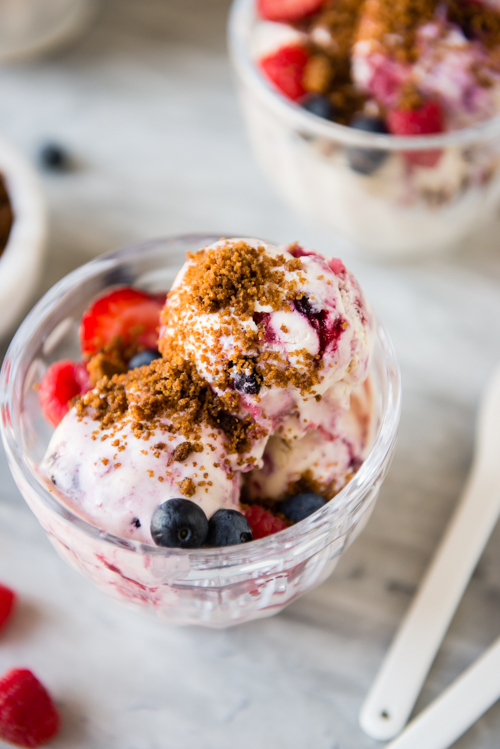 Variations:
– The berry ripple can be used as a topping instead of a swirl, if desired.
– Substitute 1 cup of lemon curd and swirl in the same way as directed for the berries.
– Substitute mango, peach, cherries, or another fruit for the berries and sweeten to taste with your sweetener of choice.
– Instead of or in addition to the berries, swirl in some hot fudge, caramel, or another of your favorite dessert toppings.
– Instead of whole milk, use full-fat coconut milk for a coconut cheesecake flavor.
– Shortcut — use your favorite pie filling instead of making your own sauce. (Apple filling with a pinch of cinnamon would be spectacular!) 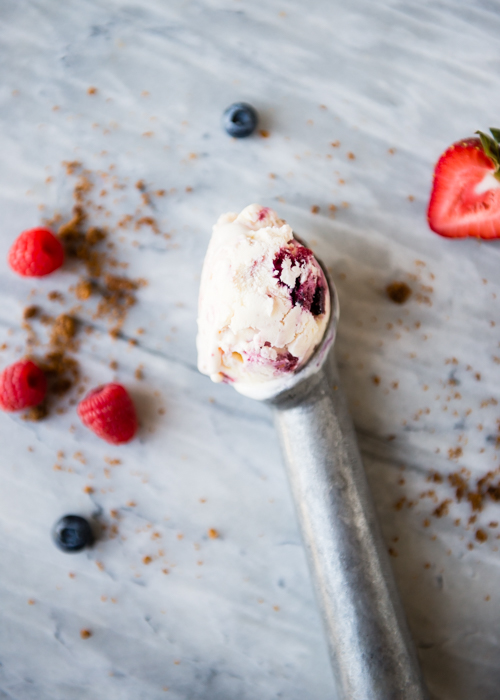 See what I mean? Doesn’t that look amazing? Thank you so much for the recipe and helpful tips, Lindsey. My mouth is watering already. We don’t have access to graham crackers here, but I think Speculoos would make a good substitute.

Dear Readers, if you give this recipe a try, I’d love to hear. Happy Ice Cream Month!