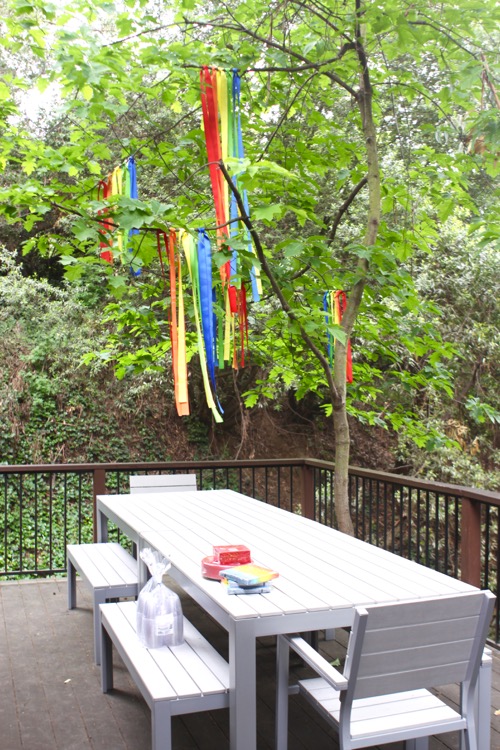 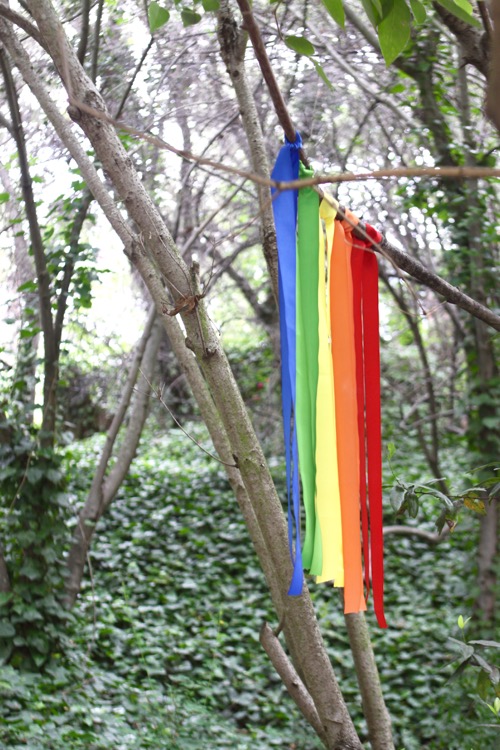 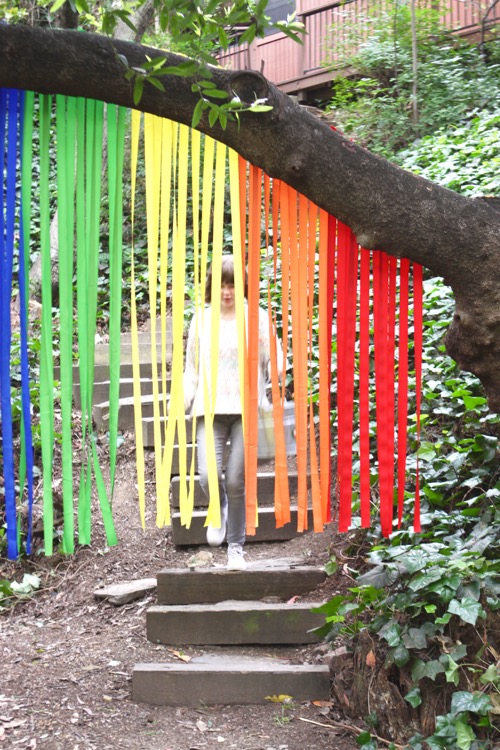 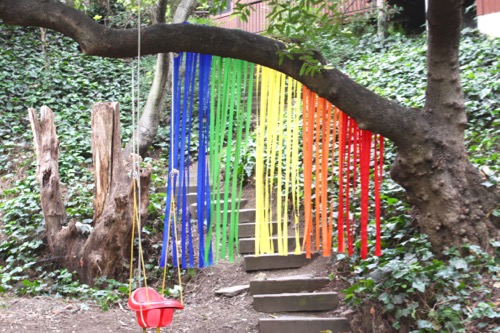 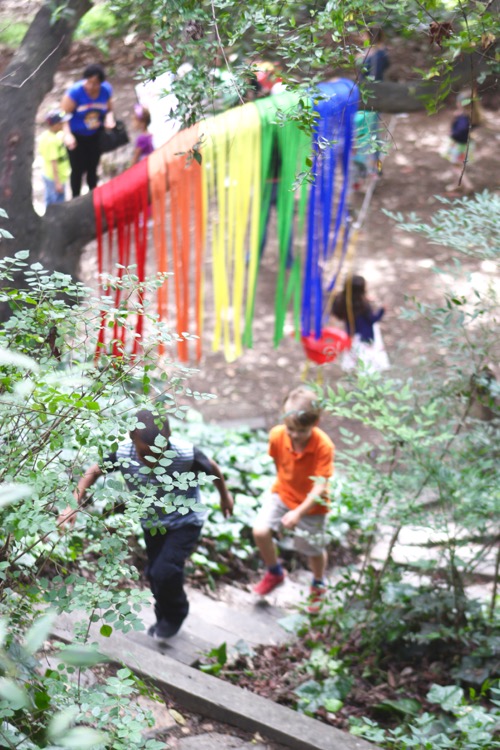 – As I mentioned, Saturday was party central at our house. June’s was mostly outside in the backyard and on the deck. I adore pretty much any color spectrum anything, so I was delighted she picked rainbows as a theme. We put rainbow ribbons in the trees, and it won’t surprise me if we keep them there all summer long. They look so pretty! 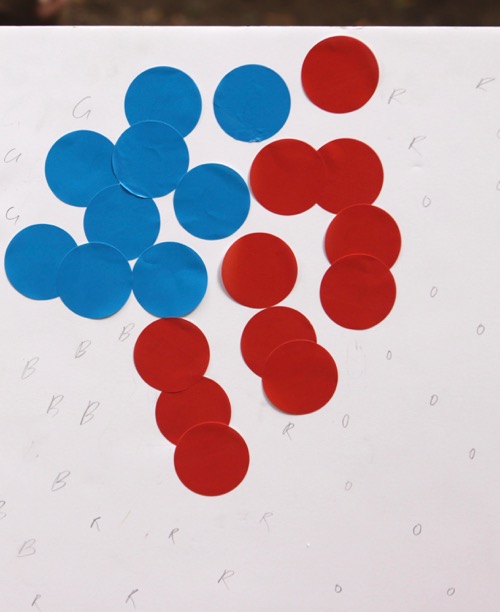 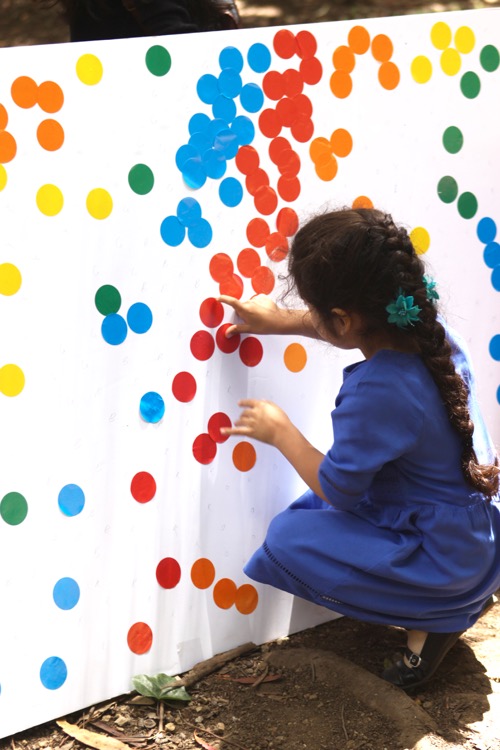 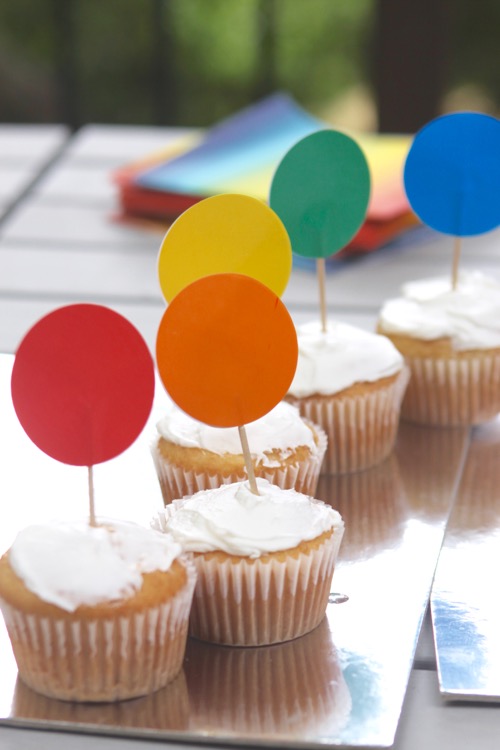 Two highlights from June’s party: 1) A sticker board. Ralph filled an oversize piece of foamcore with initials in a pattern — R, O, Y, G, B in diagonal stripes. Then the kids, age 5 and 6, would put 2-inch circle stickers in corresponding colors on the initials. Easy, fun, and the kids were excited about what they made. This was the activity we started with while guests arrived, and then kids would go back to it throughout the party to add more stickers. Before the party, we used the stickers to make cupcake toppers too. 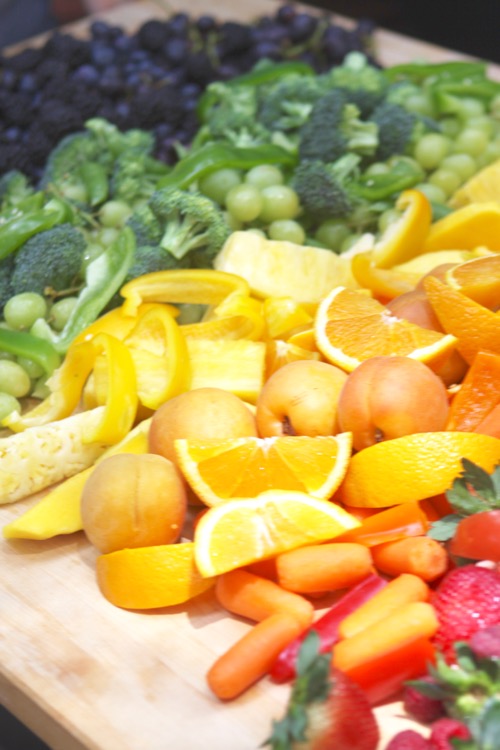 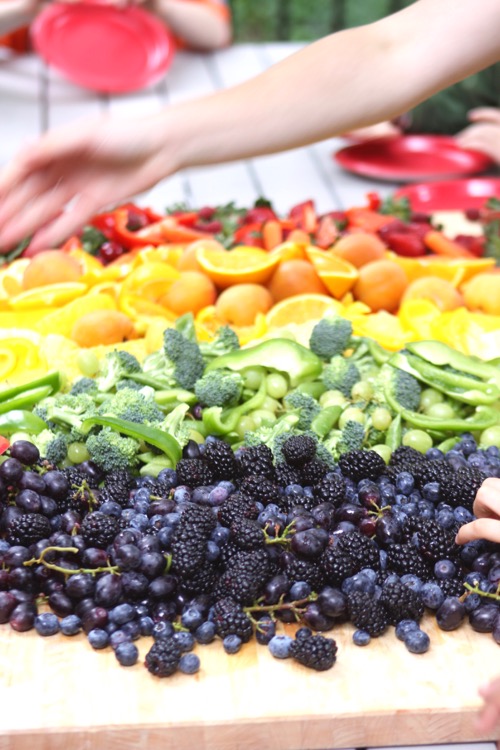 For lunch, we ate outdoors on our deck. There were hotdogs on the grill, and a big bowl of chips, but the best part was our giant cutting board filled with a rainbow of fruits and veggies. It sat in the center of the table and the kids helped themselves. 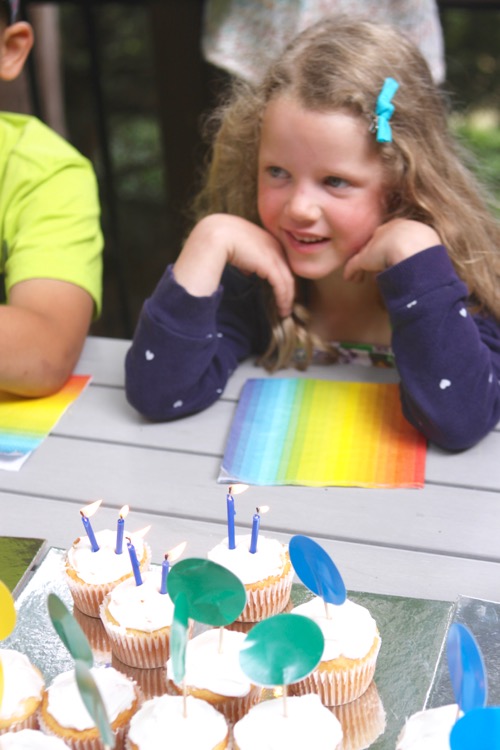 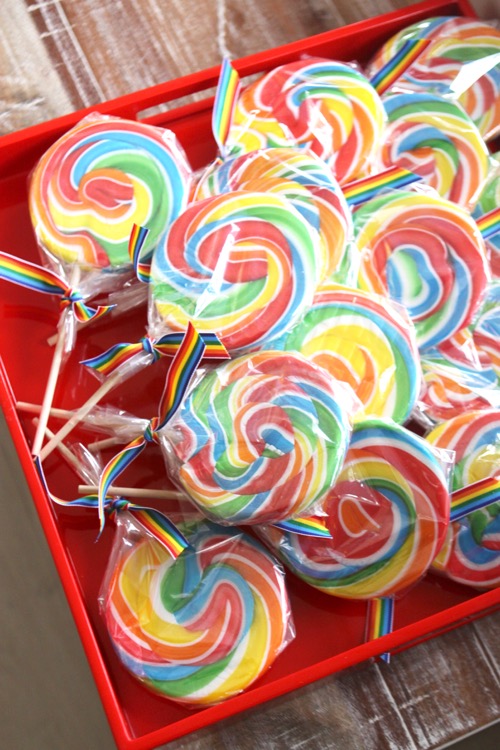 Even the aftermath was pretty: 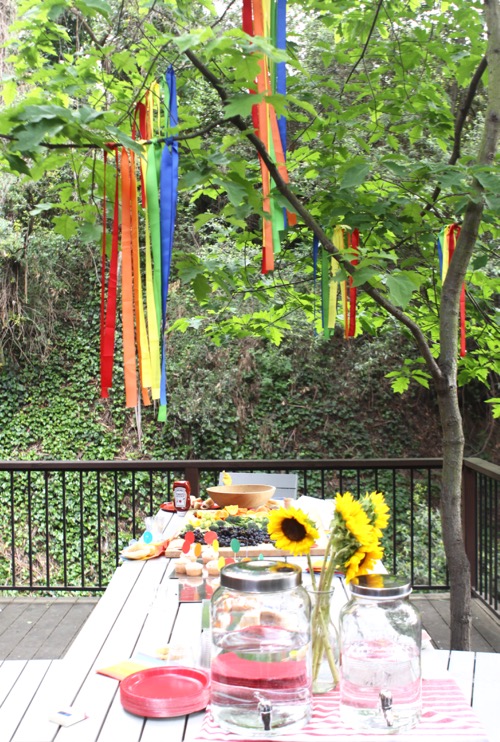 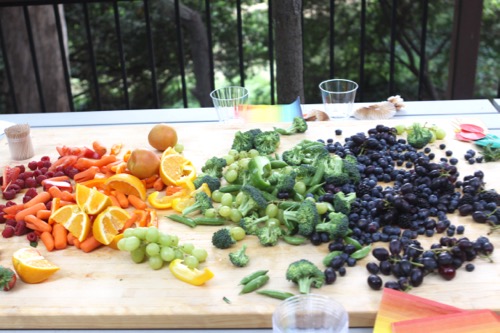 – Betty’s party was also delightful. The theme was Series of Unfortunate Events. We started with VFD charades. Phrases with VFD play a big part in the series, (like Very Fancy Doilies and Volunteer Fire Department) so Maude used her typewriter and created 20 or so cards with VFD phrases on them. Some from the book, but most that our kids just made up. 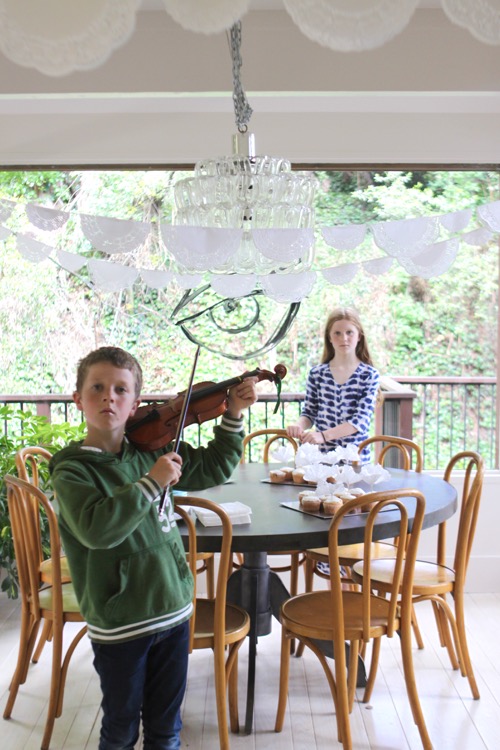 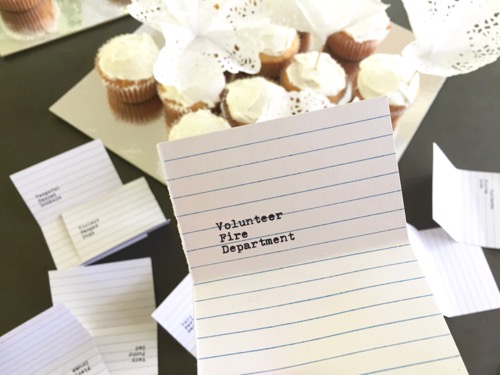 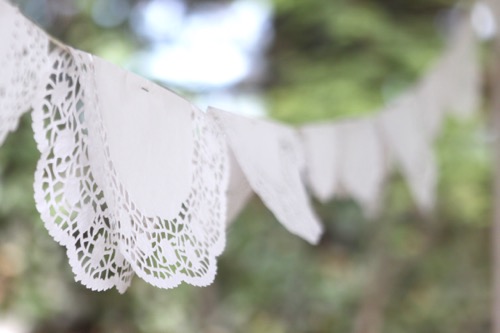 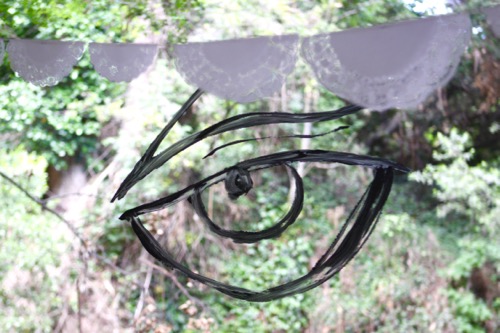 The books feature 3 siblings. The oldest likes to invent, the second likes to read, and the third likes to cook. So that informed the rest of our activities. After charades, the kids invented by doing an egg drop. We put out a bunch of materials — rubberbands, straws, popsicle sticks, a stack of newsprint, glue gun, masking tape, etc. — and each guest created a contraption to try and protect their eggs. We gave them about 45 minutes to work on their contraptions, then they took turns dropping their creations — with a raw egg inside — off our balcony onto the front walk. This was a big hit! None the of the eggs survived completely intact, but some only had a crack! 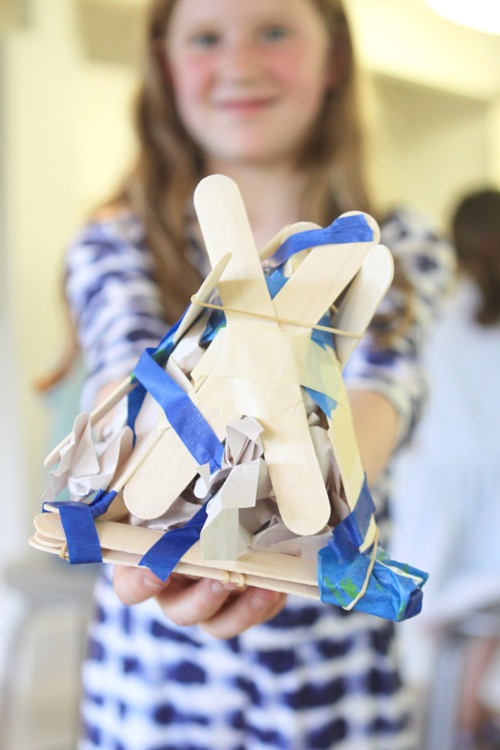 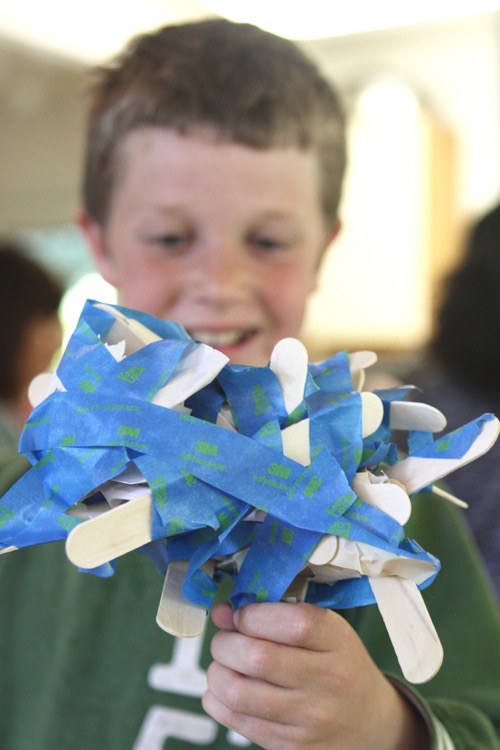 After that, it was reading time — we had all the Series books out on display in the family room and reading loft, but mostly the kids wanted to watch the movie, so they did that for about 20 minutes. Then it was time to cook! They prepared Pasta Puttanesca for dinner — a meal featured in the first book. Though, we didn’t really follow the recipe. Instead, they made penne with marinara sauce and bolognese sauce. 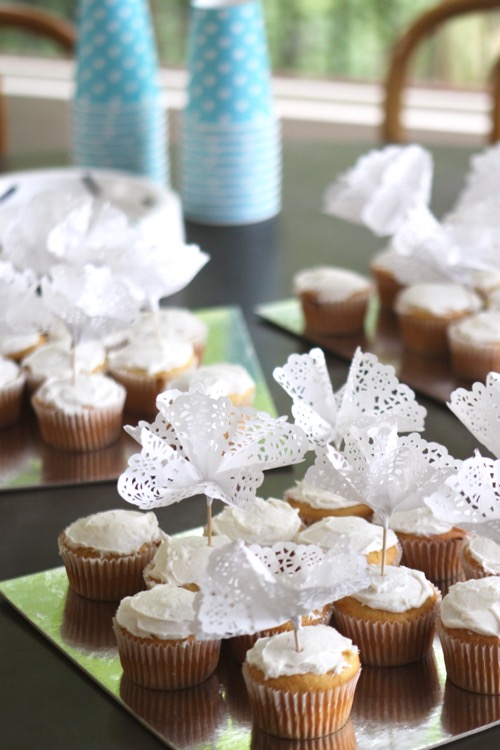 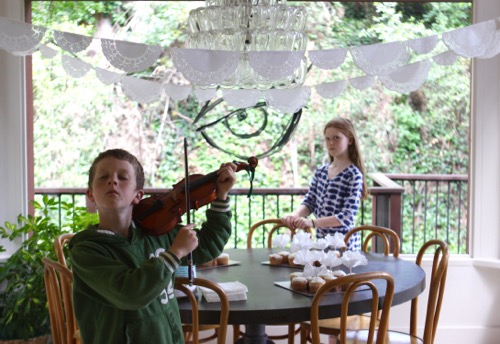 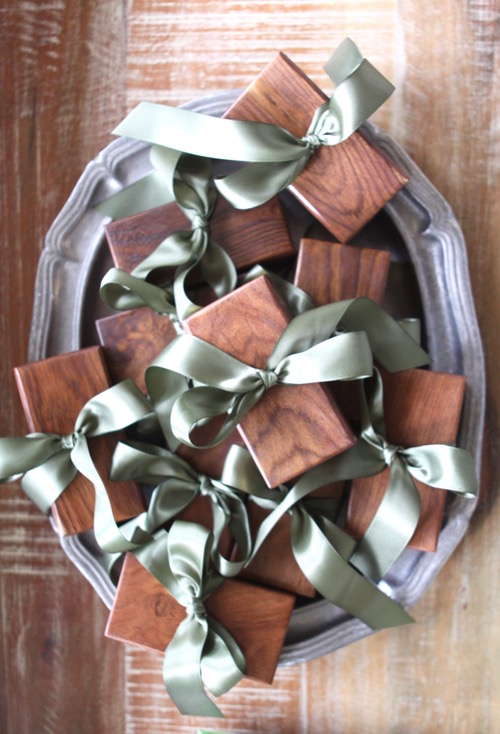 Our cousins joined in at the end of the day which was perfect. After the guests left, we could just hang out with family and relax and enjoy dinner.

– I’m craving a good date with Ben Blair. We do what I’ll call “mini-dates” almost daily. We work out together, do evening grocery shopping together, run to Target together. We’ll hit a late movie once or twice a month. I love any chance I get to hang out with him, so no complaints, but I’m in the mood for a real date. A concert or a museum or a restaurant where we’ve made reservations well in advance. I feel like we were really good at those kinds of dates when we lived in New York, but we’ve been crummy about them ever since. How do you handle dates with your spouse or partner?

– Speaking of museums, I want to see the new SF MOMA! It just reopened after 3 years of renovations. They started the work before we moved here, so none of my kids have seen it. I can’t wait to take the family!

– And speaking of reservations well in advance, I’ve come to realize that part of why we no longer go on planned dates is that we’re in a stage of life where advance planning actually stresses us out instead of relieves us. We seem to be in a phase of life where we can only do things spontaneously. There are exceptions, but mostly I find I’m resistant to put anything “extra” on our calendar. It’s generally pretty packed with school and work commitments, and I’ve found that if I add a dinner-with-friends to the calendar, or buy tickets to Pop-up Magazine event, seeing it on the calendar causes my heart rate to go up.

Instead, “extra” activities seem to be best at the last minute. We love calling friends at 8 or 9 PM and going out for dessert. And we’re great with someone calling at 5:00 and saying they have tickets for a show later that night if we want to go. Beyonce´is in town tonight, and it won’t surprise me if we’re on StubHub this afternoon looking at tickets.

I’m not sure exactly what it is, but I find I’m much happier about events when they come up last minute. In part, it seems to be so much easier to assess our home and the kids right then and there, and make a smart decision. Is anyone sick? Are there school projects due that someone forgot? Do we have the groceries we need for tomorrow? Are the older kids home and available to babysit? We can get immediate answers and can make a plan.

On the other hand, when we plan in advance, stuff tends to come up and I often find myself wishing we could cancel. It definitely wasn’t always like this, and I’m assuming it won’t be like this forever, but while it lasts, we’re kind of awful to try and make plans with. Does anyone else feel like this? Am I the only one?

– I can’t believe we’re headed to France next month! We get two whole months there!! June 20th to August 20th. Just thinking about it seems so dang dreamy. We’ll be working on our house, doing some traveling, reconnecting with all the people we love in Normandy and mostly just soaking up how much we love being there. The countryside, the food, the pace. All of it.

Right now, we’re trying to figure out how much of our time there we should plan out and how much to keep flexible. Have you already made your summer plans?

– Speaking of summer, the summer fruit has arrived and we are eating piles of it. Apricots and nectarines for miles.

– I’ve had another major run-in with poison oak. Which I’m kind of incredulous about because I try to be so dang careful. But despite my precautions, my shoulders, back and stomach are covered in the awful rash at the moment.

I’ve got a doctor’s appointment on Wednesday to renew my depression meds, and I’ll ask for a giant pack of the poison oak ointment too. I basically have to have a stockpile on hand to get me through the summer. But happily, I’m getting better at managing the pain if I do somehow get the rash.

What works best for me is to take 3 or more showers a day — I start with lukewarm water and soap up, then I turn the water super hot — it’s sort of a hurts-so-good thing and it seems to leach out some of the poison, then I turn the water cool. Then I towel off and put on ointment, and I’m good to go for about 4 or 5 hours.

– We have a fish! June’s big wish for her birthday was a pet. Though I grew up with both cats and dogs at our house, I haven’t felt comfortable getting a pet for my own kids. First because we were in baby stages and I didn’t think I could manage training a pet. And now, even though we’re well past the baby stage, we travel so much that it doesn’t seem like it would be fair to the pet. But we decided we could manage a beta fish. So that was June’s big birthday gift.

When she saw the fish, her eyes lit up. We asked her what his name should be and without hesitation she said, “James. James the Blue Fish.” It was pretty adorable.

Approximately 5 minutes later she was in tears wondering what would become of James when we were in France. I told her I thought one of our cousins would be willing to feed and care for him. That was comforting, but she’s sure she’ll miss him too much. Apparently she’s got that instant mother’s love thing going on. Hah!