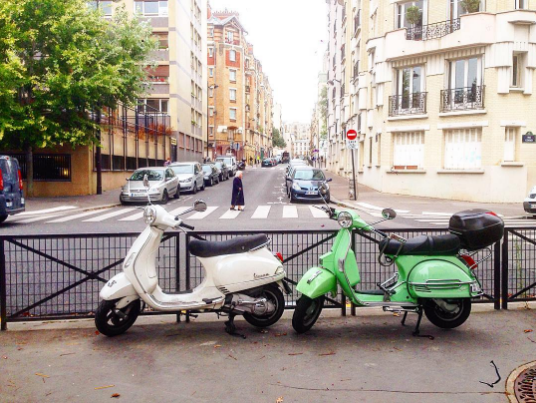 Welcome to October’s installment of my random thoughts. Halloween is just a few days away, and then the holidays officially start. (So soon!) Feel free to share your own random thoughts in the comments.

– On my weekend link list, I mentioned the Facebook Live video I did last Thursday. It was sort of a post like this — lots of random thoughts — but a spoken version. Me on my living room couch, chatting about all sorts of things. I’d like to make it a weekly thing, so I’ll be doing a second one tomorrow. You can watch LIVE starting at 11:00 AM PST. Spoiler: I know one thing I’ll be talking about is favorite things to buy in Japantown. And if you comment, I’ll try to respond on the video!

Something unusual for us: Ben Blair and I haven’t gone to a costume party in ages, but we have several invitations this year, and I’m realizing I may need to come up with costumes. Maybe I’ll go with something simple from this video I made. How about you? Do you dress up each year? Or is it enough trying to come up with costumes for your kids?

– Maude has officially been in Paris for a month and a week. Gosh we miss her so much! But happily, we skype almost every day. During her free hours, she explores the city non-stop and it’s so fun to hear about her adventures, or see an instagram of a picnic she’s having on the banks of the Seine. This week, the family she is an au pair for is out of town. (French schools have a 2-week fall break.) So Maude has a break from work. Her cousin Lucy came to visit for the first week, and for the second week, she’s headed to Switzerland with her cousin Roxcy.

She loves the family she works for and I can see her independence and confidence increase daily. When she gets back from her trip to Switzerland, it will be November, which means UC college applications are due! So we’ll be doing lots of back and forth to finish those up and make sure she’s marked it off her list. So many good things in her future!

– Ralph also seems super happy. He arrived in Colombia yesterday and we got a quick note early this morning letting us know he was safe and happy. He’s been assigned a trainer — Elder Porras from Mexico —  and they have been asked to work in a small village about 4 hours from Bogota, called Barbosa. He says “Bogota is one of the coolest cities I’ve ever seen — mountains and bricks and rain.”

It was just a quick note and we’re dying to hear more! What is Barbosa like? How is the weather? Has he tried anything yummy to eat? What is his apartment/house like? As you can imagine, we look forward to his weekly email like crazy.

– The house definitely feels different without the older two kids. I find myself resisting getting used to it, and instead thinking of it as just a temporary change. It feels like so many less people! Which I know is strange because there are still 4 kids. But that’s how it feels. We had a lip sync contest the other day and it took me a minute to get used to the idea. Like, we’re still going to do these even though we’re missing people? Such a strange sensation!

– Did I tell you we have a funny car situation happening? We’ve been a one car family for ages. We’ve driven a Honda Pilot since we moved here (our 3rd one — we’re fans!). But last spring, we looked into adding a second car for the two teenagers to share, and decided on a Fiat 500e. I think they may only be available in California. What I heard is that California required Fiat to offer an electric version in order to do business in the state, so they made one just for that purpose and they weren’t very excited about it. But it turns out customers love it! It’s fully electric, with no gas option. It can only go about 90 miles between charges, so it’s not a roadtrip car. But it’s perfect for errands. It’s cute and little and only seats 4 people.

Well, our Honda lease ended as we left to France this summer, which means we came home to no car. So we bought the fiat 500e as planned, and figured we’d get a new family car too. But we haven’t actually bought a family car yet! We had decided on the new Metris beacuse it’s super similar to the VW Van we drove in France — sort-of industrial and the perfect roadtrip car for a big family. But then, the two older kids moved away and we weren’t sure we needed such a big car. And then we just started living life and haven’t ended up getting a second car at all. We’re still just using the little Fiat. Hah!

The Fiat has been perfect for our daily errands. But we still need a car that will fit the 6 of us left at home — and something that we can use for long drives. So we need to buckle down and pick something already. Although the idea of just renting a big car as needed has also come up. This development is definitely nothing I would have predicted.

– It’s not even cold here, but suddenly I’ve been making hot cocoa like it’s going out of style. I realized we had to go out for more milk twice this week because I’ve been drinking so much. Hah! I think it’s a sign that I’m ready for the holidays to get here.

Though if I’m honest, I’m having such mixed feelings. This year has had so many emotional changes and I wake up longing to beg God to just hold time still for a minute and let me catch up (whatever that means). It’s like I can’t believe it’s really time to thinking about Thanksgiving, and I’m also looking forward to all the smells and scents and tastes and activities that come with November and December. How are you feeling? Is the year going too fast for you? Or are you excited November 1st is less than a week away?