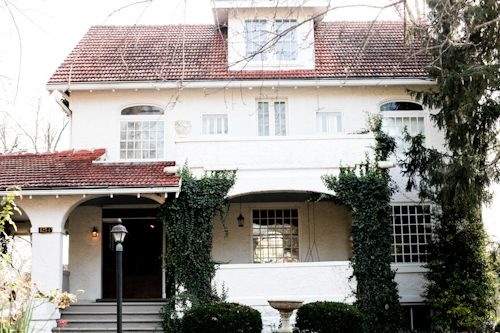 Julie Blackmon is a photographer. Correction: Julie Blackmon is an amazing photographer. And that’s one skill that contributes to a beautiful home, don’t you think? Having a refined eye that can edit mercilessly, arrange a room so that the sunlight dances through it, and ultimately create a space where both kids and adults feel comfortable. I’ve known so many friends who routinely take photos of their home to “check” how it’s living. Is it balanced? Are the colors and textures and patterns in harmony? Julie does it all perfectly. Just take a look. Friends, welcome to the Blackmon home. 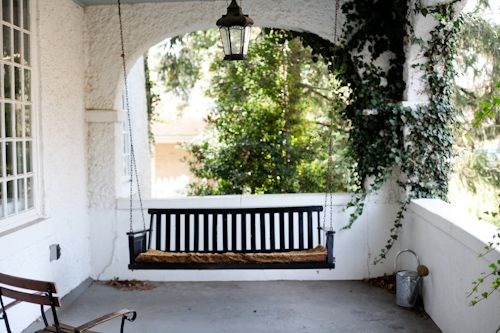 Q: Please tell us who lives in this picture-perfect home.

A: Well, thank you for saying that, but it’s not so picture perfect. What you don’t see is inside the drawers, closets, basement, garage, or the broken skateboard parts scattered across our front porch. And then there’s always Photoshop! Really, we do love our house. I’m an artist, living and working from home, and I live here with my husband, WD, who’s head of English at Missouri State University, and my 13 year old son, Owen. We spend a lot of time at home, so we’ve really worked at making our house a place where we want to be. But our house will never look perfect. So if it does in these photos, it’s because my genius designer sister, Sharon Taylor, can stage anything. 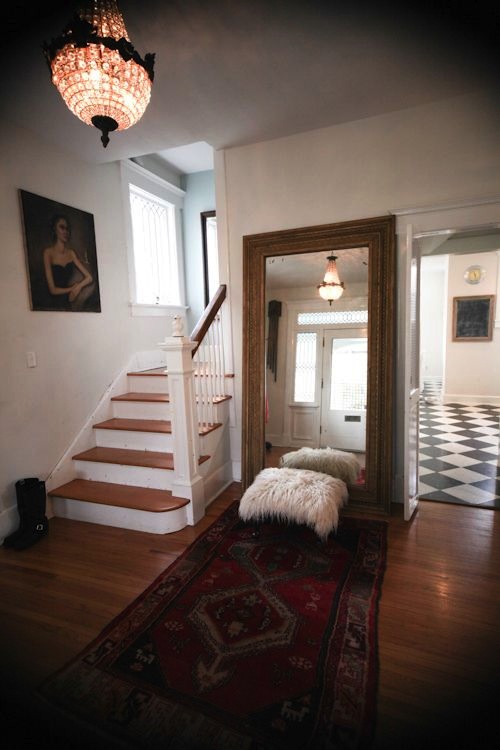 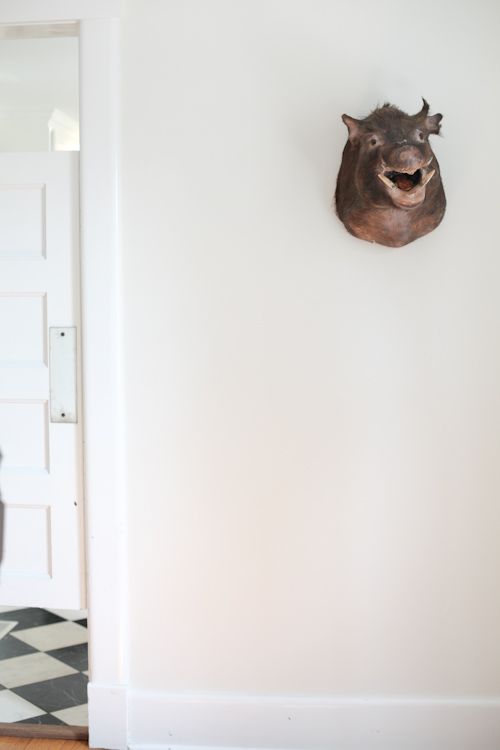 Q: How did this home become yours? Do you remember the moment you felt like this was the one?

A: My dad used to take us on Sunday drives after church when we were growing up. He’d have us all cram in the old blue station wagon (with wood panel trim!) and drive us around after he took us to Burger King, always our first stop after church. Back then it wasn’t called fast food; we thought of it as a real restaurant.

But on the drive, one of the houses he’d always slow down in front of was our current house. It was the late 70s, and the Ozark Mountain Daredevils rock n’ roll band lived and recorded in this house. Their tour bus was sometimes parked out front, and it was a time when they really were rock stars at the height of their fame. We were so proud that real celebrities were living right here in Springfield, Missouri. 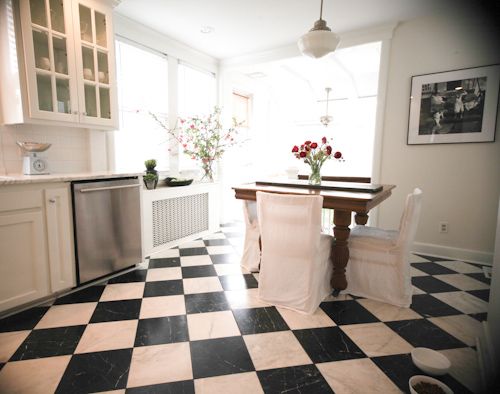 So, early on the house had a glamorous significance to me. About 15 years ago it went up for sale, and we bought it immediately. Years later, I actually spoke with the lead singer who told us some of his favorite memories were in this house, and that there was a certain magic about it he’ll never forget. 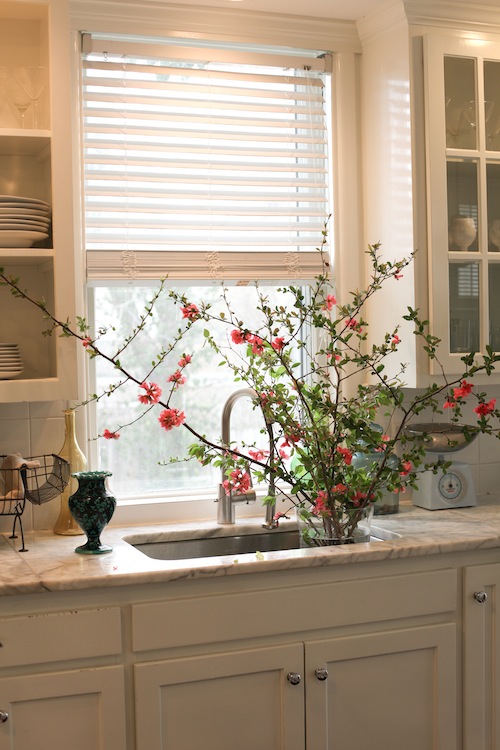 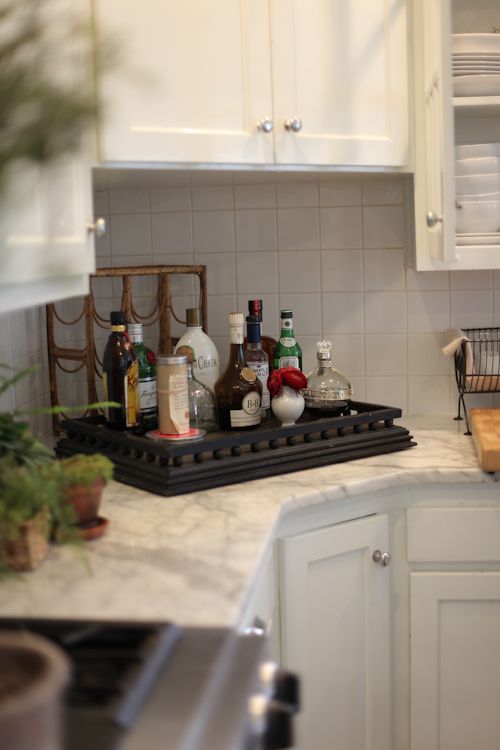 Q: You’re a photographer who uses your home as a backdrop for many photo shoots. Will you tell us about your favorite scene you’ve set up in your home?

A: Probably the shoot that stands out most is the shoot we did for the TIME magazine cover in our dining room. The story was about how paying kids to make good grades really works. So, for props, I had a big ten foot roll of white paper draped from the ceiling, a school desk, and a stock of 1,000 one dollar bills. At one point I had the kids throwing up the bills in the air. They loved that!And then to pay them for their time and efforts, I told the kids when we were done that they could keep a few. They paused and looked at me in wide-eyed disbelief…and then went into a high-speed pocket-stuffing frenzy. 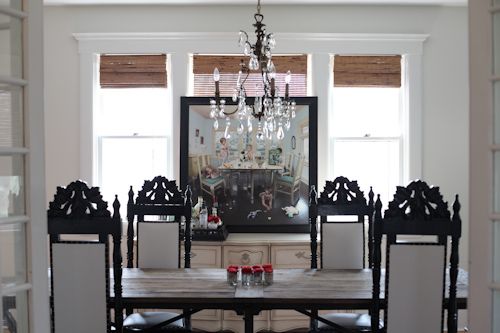 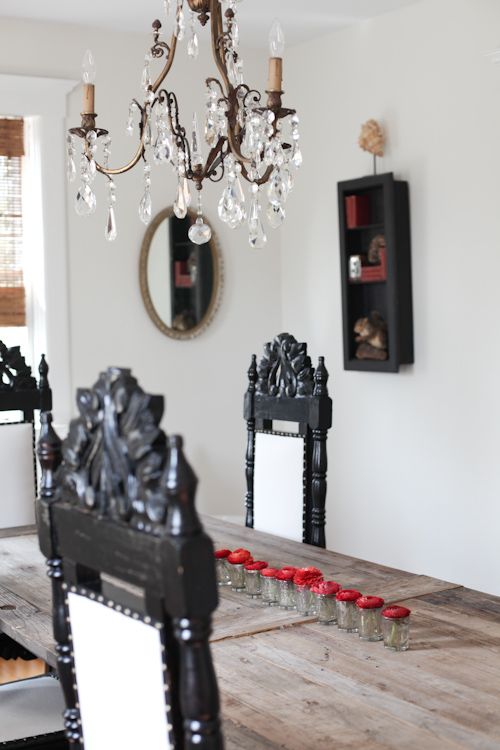 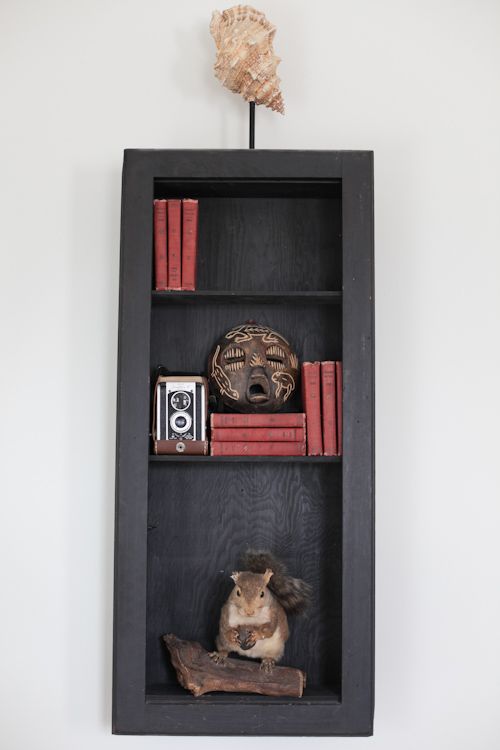 Q: Does working in your home interfere how you live with your kids? Is there that “Stay out of the living room! We’re shooting tomorrow!” kind of thing happening?

A: Oh yeah, I’ve had to say (scream) that before. That never goes over too well. So I really don’t shoot inside our house so much anymore. I got tired of moving everything in the living room into the dining room or vice versa. Mostly I find my settings close to home, though. And, actually, our backyard was the setting for several recent pieces. 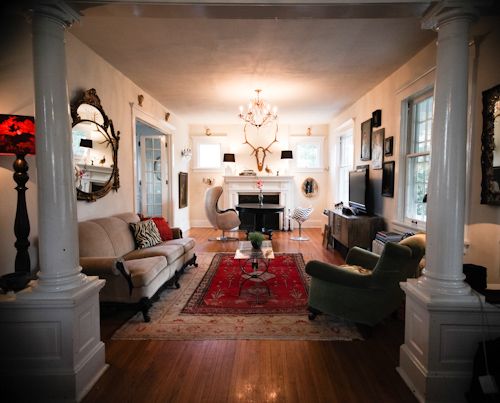 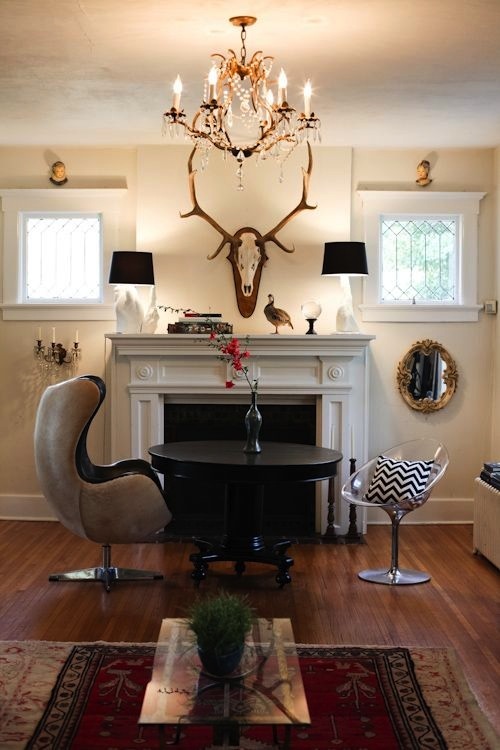 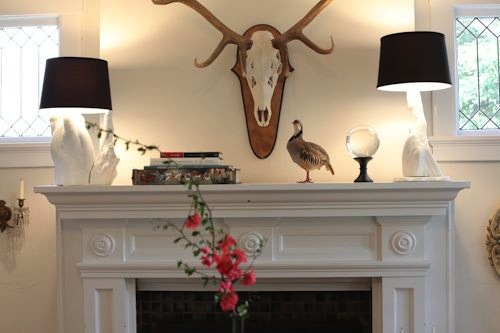 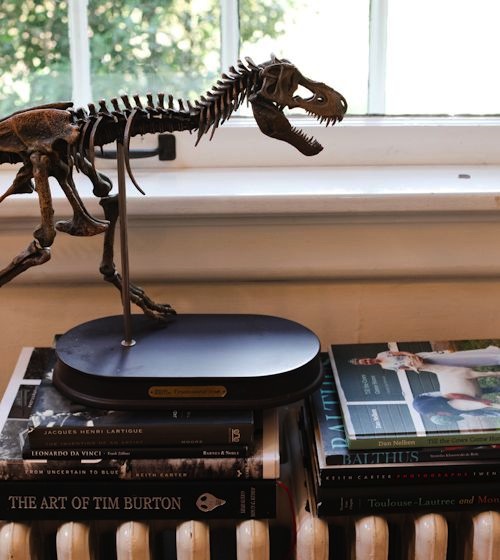 Q: As a photographer and most likely pretty visual person, what is your preferred aesthetic?

A: I think it probably does cross over. I always look my work in a way that if there’s some detail or prop in it that isn’t adding to the piece, I take it out. The same applies to my living room. If it’s a chair or a mirror or knick knack that’s not adding to the space, or its a distraction from something else, then I’ll take it out. I guess I like it when there’s a focal point — an area that your eye naturally goes to — and everything else in the room just works to sort of enhance that. 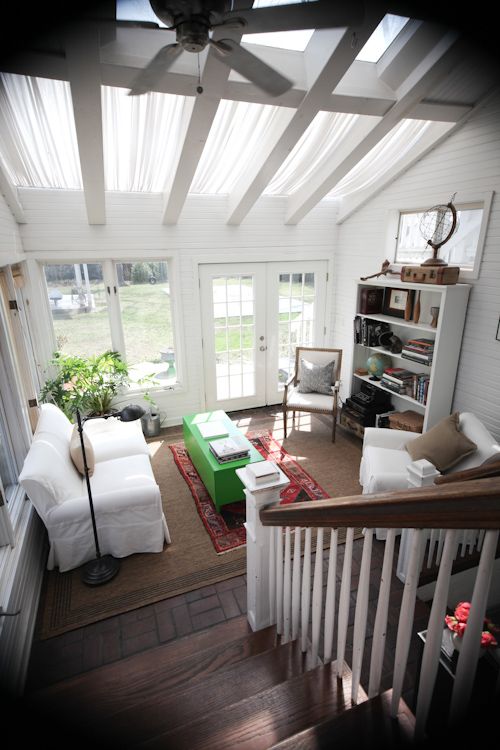 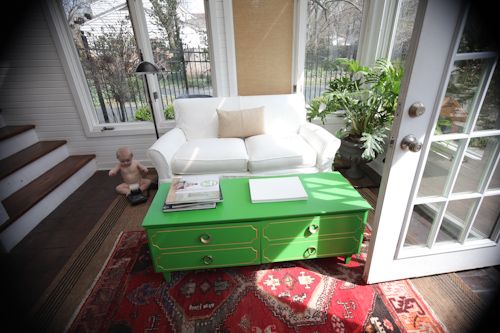 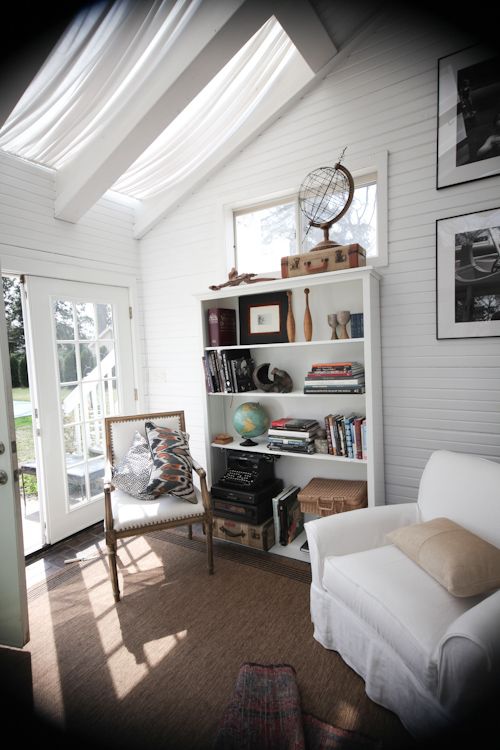 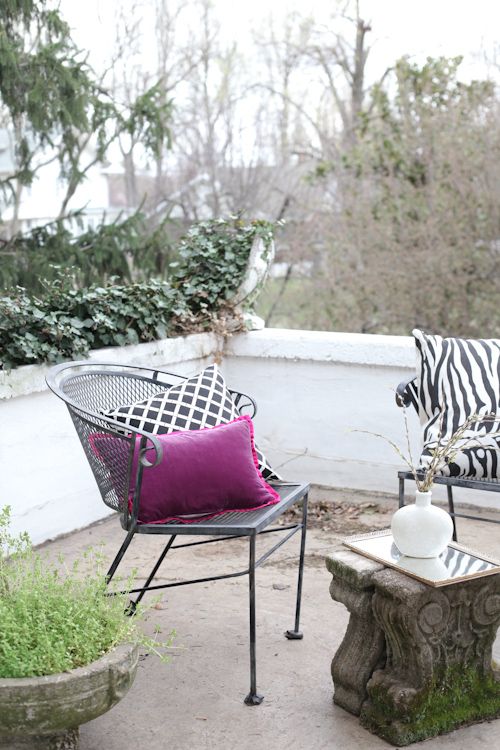 Q: Did that change with kids? How would you say they affected your style?

A: Yeah, it changed some, I’m sure. But I think too many parents compromise their living space because they think that’s what good parents do. And then the next thing they know, they’ve got a life-size hot pink Barbie tent in their living room for two years. I think it’s good to teach kids about keeping the living room a certain way; that their toys or games can come downstairs, but they have to go back up at the end of the day.

Q: What do you hope your children have learned from your home and the way it was designed for your family and lifestyle?

A: They have learned they better pick up their crap because I’ll either go psycho on them or I’ll silently throw it away. Ha ha. 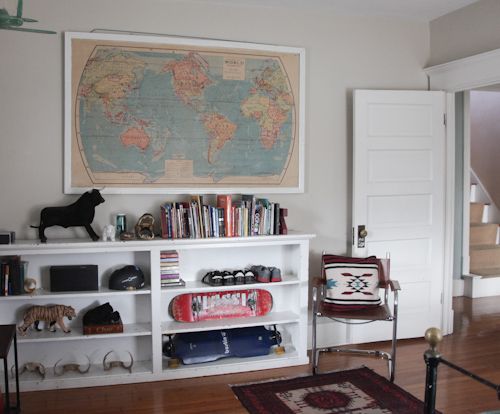 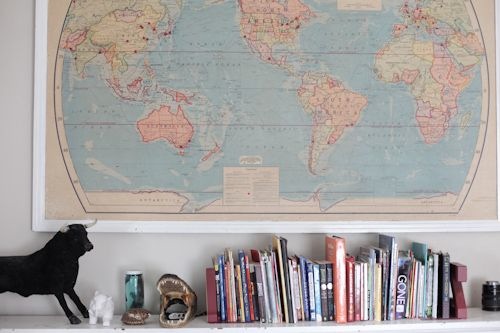 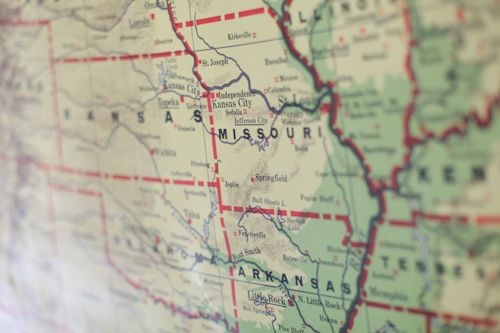 Honestly, I wish that in everything I did I would think of how it would affect my kids, both now and in the future. But I just don’t operate that way. Maybe I should. But I think it’s okay for them to realize that they aren’t the center of the universe and that they are actually in your house. My parents never let me forget that I was living in their house. I remember them telling me that when I grew up and had a house of my own, then I could do whatever I wanted, but until then…

And as harsh as that sounds, I think we’ve done a 180 on that kind of thing, so that parents are now gearing everything around their kids. Mostly, that’s a good thing. But I think you can take it too far. 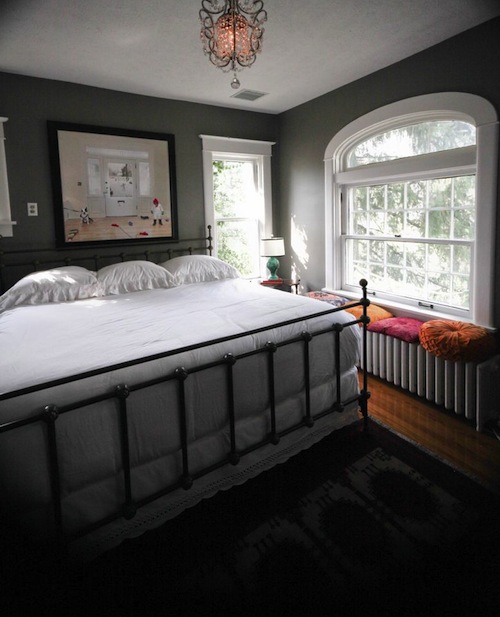 Q: What has been your absolute favorite part of living with kids?

A: Well, I can’t imagine life without them, so it’s hard to say. I just read something by Francis Ford Coppola when asked what advice he would give to an up-and-coming actor. And he told him the best thing he could do for his career is to get married and have children. That it would inform him about life and art in a way that nothing else could. 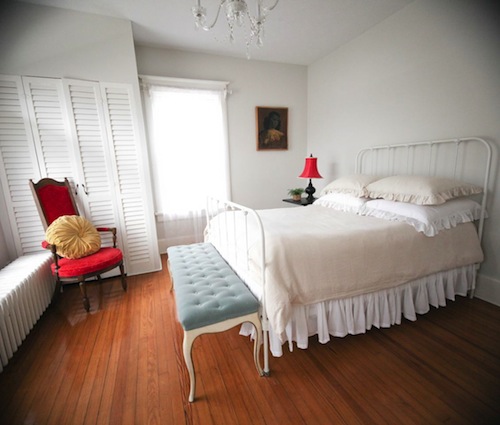 Q: Please finish the sentence: I wish I had known…

A: …to appreciate my mom and dad more. They both died young. You don’t know how much you appreciate them until you’re an adult doing what they did.

I think about how one Christmas when I was about ten, I told my mom I hated everything she’d gotten me. And there were nine of us, so I can’t even fathom how she even pulled Christmas off, only to have it followed by a moment like that. I so get it now. Just wish I could tell her.

And this is why I love learning more about how you’re all living with kids. In between style and paint selections and whether or not that wall should be knocked down, there’s so much more to be learned. About living with kids, yes, but also about living in general. Thank you so much, Julie. For all of the above.

Her last answer got me thinking, Friends. When did you begin appreciating all the things your parents gave you? Do you think your children appreciate you? How do they show it? Your stories are always the best read of my day!

P.S. — Take a peek at all the homes in my Living With Kids series here. And if you’d like to share your own home with us, just send me a note! It’s a lot of fun…I promise!