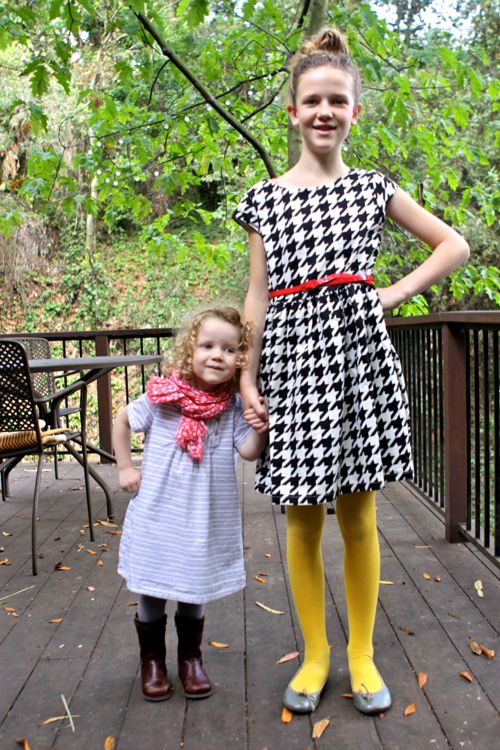 This is a photo of Olive and June. Which reminds me, I really need to write a post about how Olive and Ralph are doing in France!

But really, this photo is here, just so I can have something pretty at the top of this post. Because after the jump, I’m showing lots of photos of the girls’ room pre-remodel, and the photos are not pretty. They’re not pretty because I snapped them with my phone in low light. And they’re not pretty, because, it’s just not a very pretty space. Yet.

But it will be! I’m confident of that.

We started the remodel on Tuesday. Want to see what we’re up to? 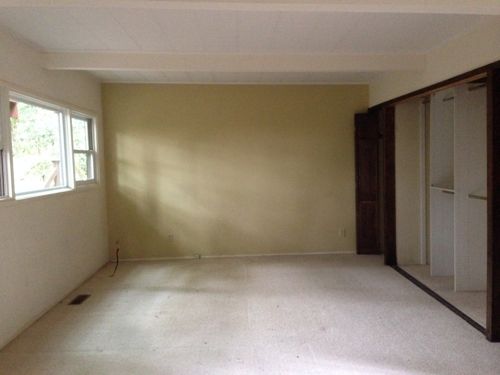 This is the girls room. The former owners used it as the master bedroom. You can see what it was like when we moved in here. It hasn’t changed much. 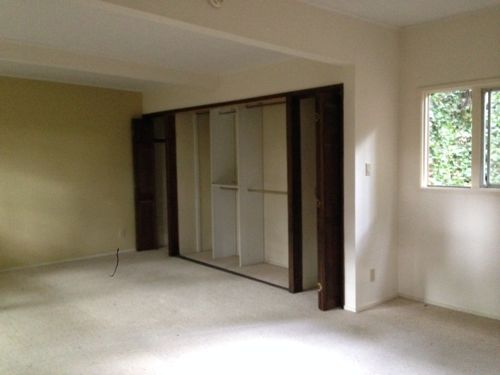 There used to be two big closets. The one pictured here, and another one that backed up to the boys’ room. 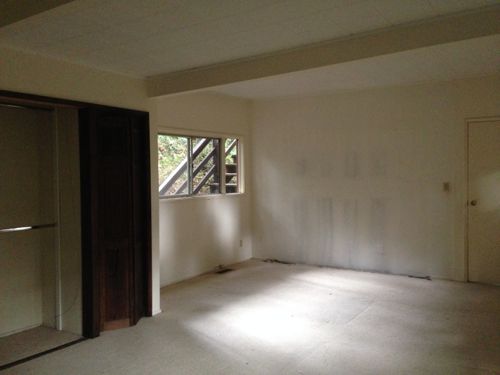 See that wall by the door that looks like it’s freshly dry-walled? That was a closet. But we walled it in so we could add a couple of feet to the boys’ room, in order to fit two twin beds in there. 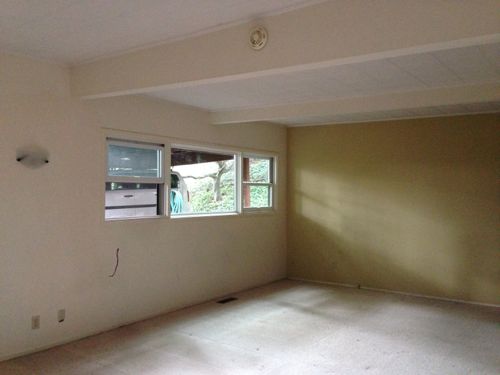 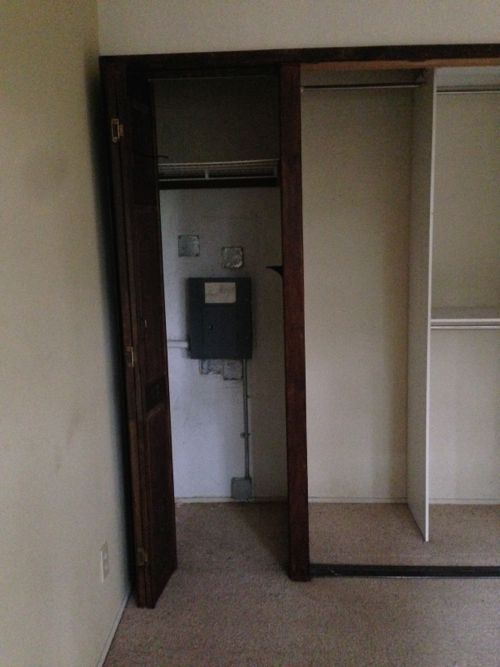 Our first idea was to remake the closet that’s still here into 4 equal-sized closets, one for each girl. But then we learned that the electric box in the farthest closet shouldn’t be in a closet at all. So we’ve decided to do something different. 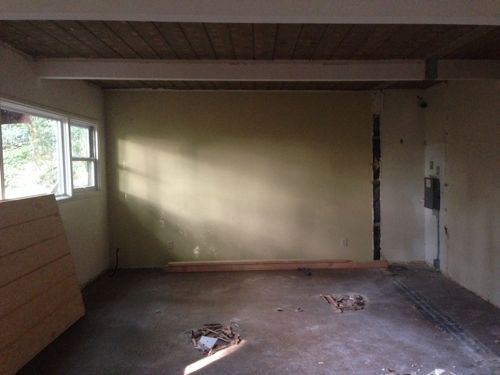 Here’s a shot of the progress after two days. The carpet is gone. And the remaining closet is gone. 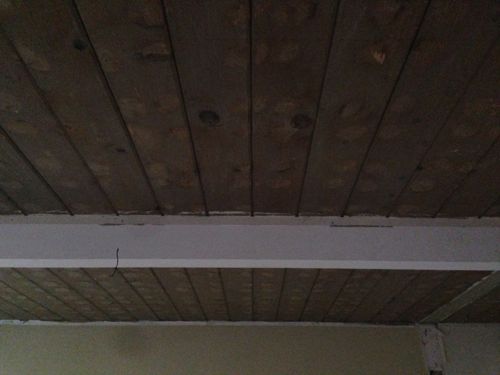 The ceiling is divided by beams into 3 sections. The tiles came off of two sections to reveal pretty wood planks on the ceiling. (Which was also true in the boys’ room.) 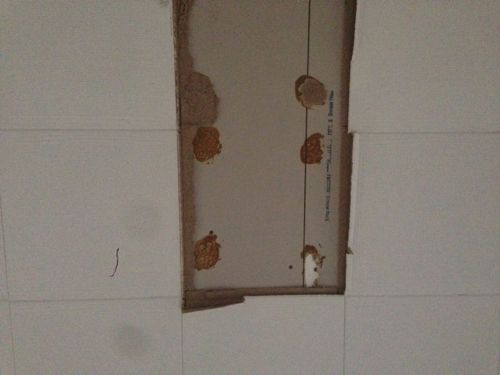 But on the third section, the tiles were over drywall — no wood planks underneath. So we’ve been thinking about how we want to handle that. 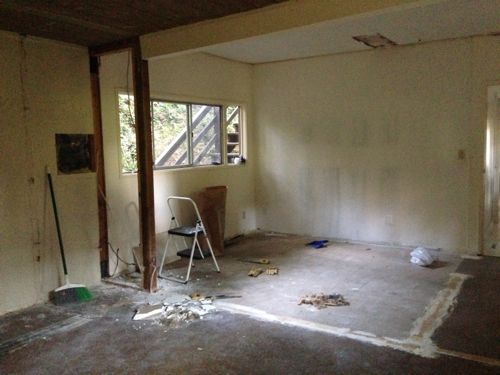 Another surprise, one of the beams that goes across the ceiling, was cut short during a previous remodel. It’s hard to tell why. But it means there is a random post in the room which holds up the beam. So we’re also figuring out how to move that post. 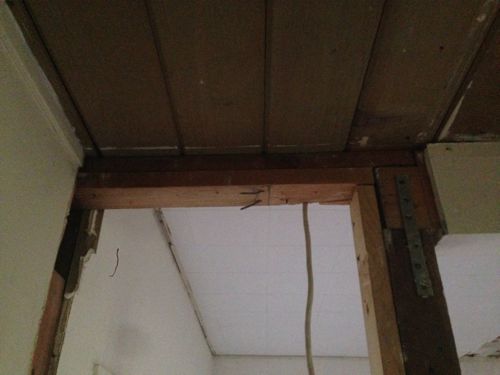 Here’s a closer shot of the cut-off beam and post holding it up. 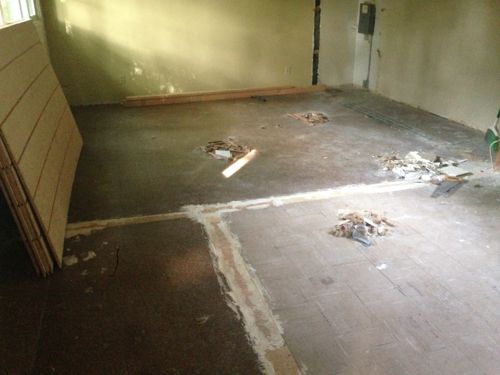 Another discovery: based on the old flooring, we can see that this room was originally divided into two. With the two closets and two windows in separate areas, we had assumed this, but it was fun to see the proof in the excavation. 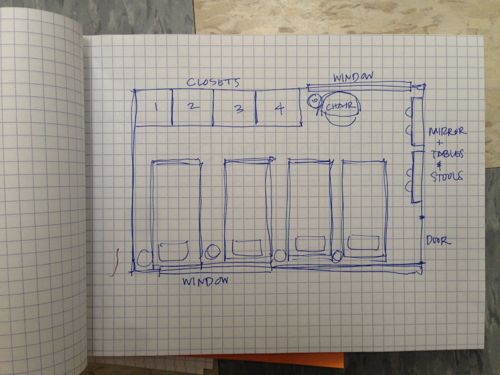 At first, we were thinking a floor plan like this. 4 beds against the left wall, and as I mentioned, the (formerly) existing closet split into 4. 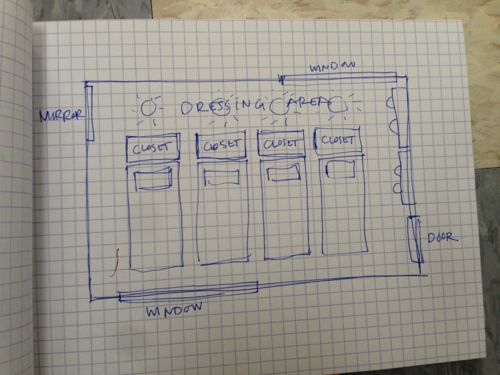 But our latest plan is to use free-standing closets, 1 for each girl, and bring both the closets and the beds toward the center of the room — the closets acting as headboards for the beds. This would create a privacy wall and a dressing area that could make sense. It’s one of those things where the idea sounds good in my head, and maybe even looks good to me on paper, but I can’t tell what it’s really like until I see it in person.

So that’s where we are at the moment. Very exciting! I will definitely keep you updated.

Now it’s your turn. Have you ever encountered a remodeling surprise? I feel like we’ve had them in every room! Also, I know when I talked about all four girls sharing a room in a post last year, that there were strong opinions on whether that was good or bad. Our girls have been sharing for over a year now, and it seems to be working well for us. Where are you on the room-sharing topic? And lastly, do you enjoy sketching out room possibilities, or does this sort of thing drive you nuts? I’d love to hear!

P.S. — I try hard to show very polished posts with gorgeous pictures, so I’m feeling very uneasy about sharing low-quality images and rough sketches. My apologies if the lack of polish is bothersome. For more posts about our work in The Treehouse, see here.