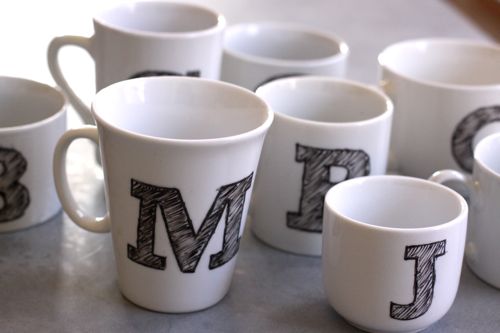 Friends! I’m so pleased to share our first gift DIY of the season. Maude made these fantastic monogrammed mugs over the weekend. Don’t they look terrific? The idea came when we saw these fun initial cups at Anthropologie and remembered our kitchen was lacking in hot cocoa mugs. We decided to create a whole set.

It’s a very doable project. Inexpensive. Eco-friendly. And family-friendly too — these mugs are dishwasher safe. I can’t wait to tell you all about it. 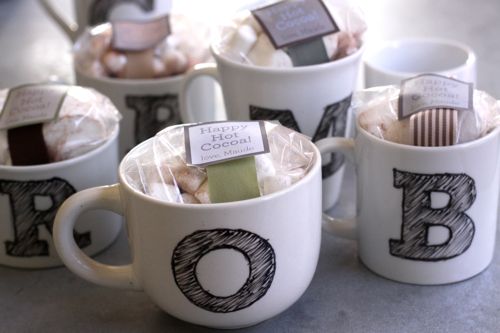 1) We started with a trip to Goodwill, where we collected 8 plain white mugs. Enough for the entire family. There was even a little one without a handle that we thought would be perfect for baby food for June. Mugs were 50 cents each and we had dozens and dozens to choose from. 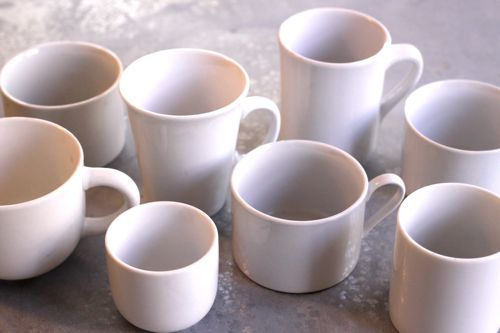 2) Then we gathered supplies. Scissors, pen, tape, graphite transfer paper, Black Pebeo Porcelaine Pen in Fine Point ($4 at Michaels, also available here) and a print out with the family’s initials.

For the font, I had something very specific in mind. I love the look of this Sketch Block Font and had it mentally filed away as the sort of thing a kid could replicate well — because it’s inherently imperfect. For this project, it worked like a charm! Since we were adding our own sketchiness, I started with a similar, but non-sketchy Rockwell font. Look for any slab-serif font (with names like Egyptian or Glypha) and they should work equally well. 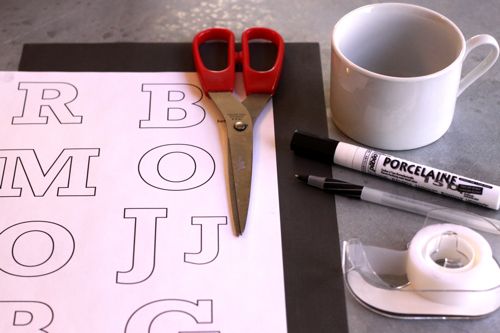 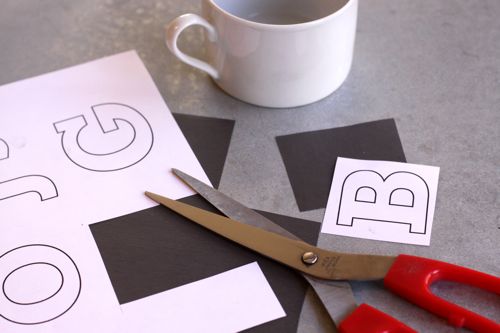 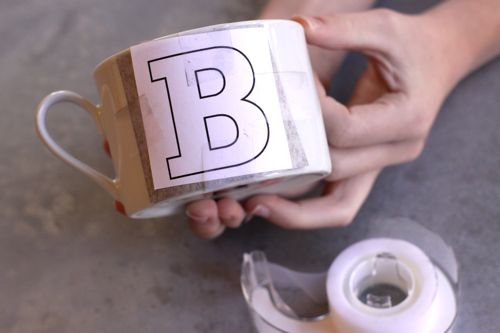 4) Trace the initial. Any pen or pencil will work and you’ll want to experiment with different pressures to see what’s best. You’ll just need a light outline. If you want, you can make your own transfer paper by rubbing a graphite pencil all over a sheet of plain paper. 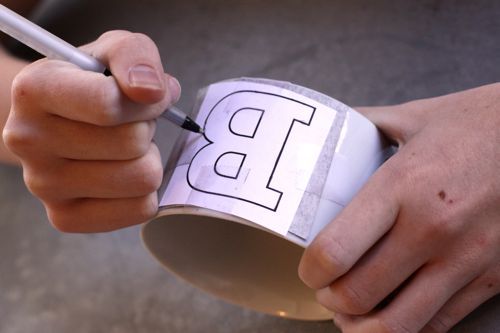 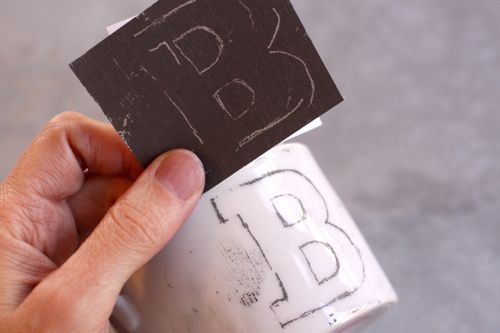 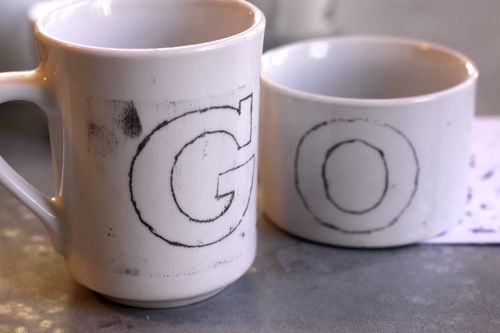 5) Take your Porcelaine pen and trace over the lines of the initial. Get the edges nice and thick then fill in with diagonal sketchy strokes. A few notes:
– The sketchy strokes look best if they’re all one direction.
– The pen didn’t produce very smooth lines for us — which was fine because of the sketchy nature of the lettering. But later, I tried a red Porcelaine pen and produced very smooth strokes. So, I’m thinking my black pen was an old, dried out one. Who knows? This was my first experience with Porcelaine, so I’m not sure.
– It helped to have a blank paper handy where we could test the paint pen.
– We definitely got better at it as we practiced. So plan on it. Until it’s baked, the paint will scrub right off in soap and water. We redid mugs at least 4 times. 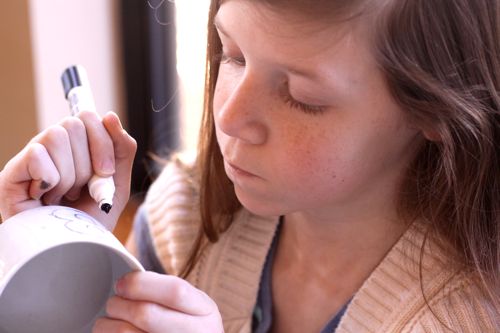 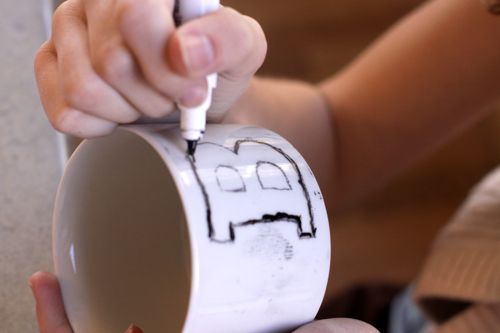 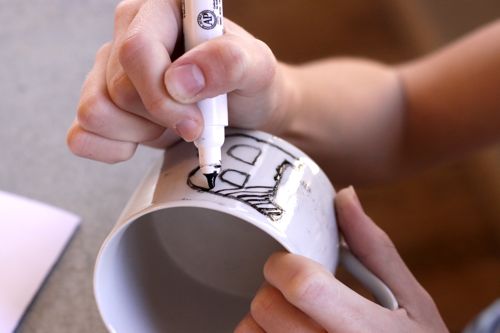 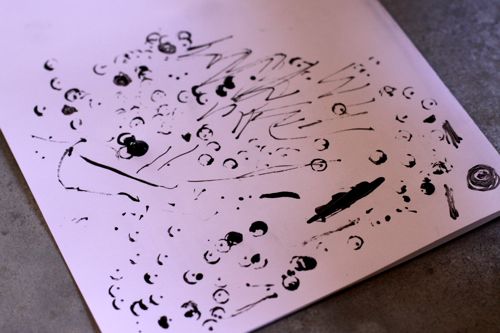 6) Once the lettering is done, let the mugs sit for 24 hours. Then bake them at 300 degrees for 35 minutes. It’s fine to bake them with graphite residue. The graphite will wipe right off even after they’re done baking. 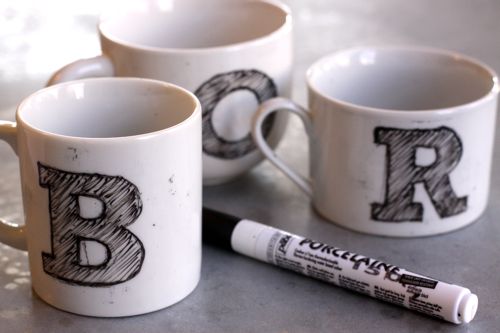 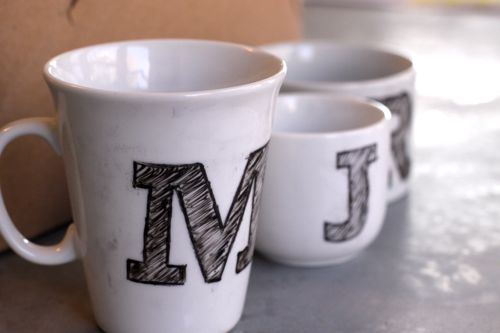 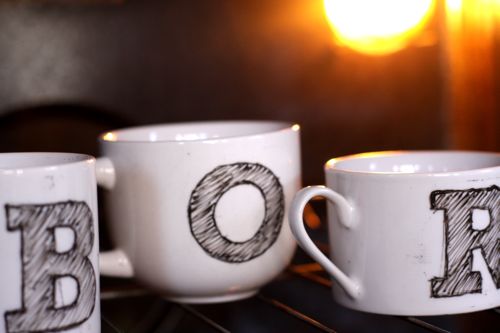 7) And that’s it! Once they’re baked, they’re done. We pulled them from the oven, wiped them up and they were ready to go. For fun, we filled cellophane bags with hot cocoa mix and marshmallows and put them in the mugs. 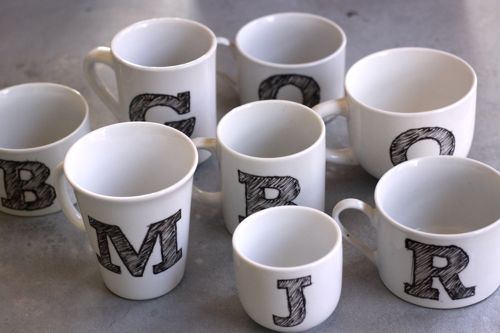 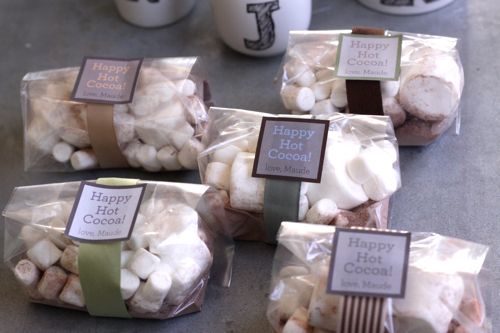 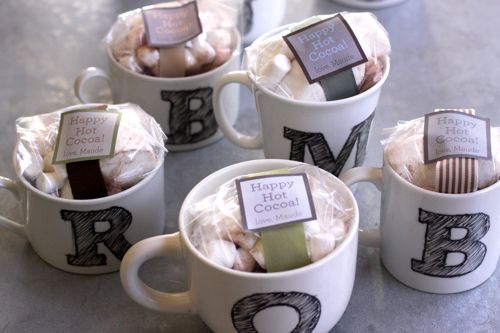 The project turned out so well that it has my mind spinning with other possibilities. Maybe we’ll make a monogrammed mug for their teachers with a Starbucks card inside. Or a matching 2-cup set for Grandma and Grandpa. Fun for Christmas, but equally fun for other events too.

What do you think? Is this a project your kids would enjoy? Are the mugs cool enough that you would buy one in the store if you saw it for sale?

Need more sibling gift ideas? We made several fun projects this year: Bleached Out Tees, Bottlecap Magnets, Custom Leather Patches and Photo Snowglobes. You can also find a list of projects from past Christmases here.