I’ve got a (possibly scandalous!) question for you related to last week’s discussion about Cosmetic Procedures. But first, some backstory:

On our visit to the beach at Deauville, we were getting our chairs and towels situated, when I looked up and realized many of the women on the beach were topless. Not everyone, mind you — I didn’t feel at all out of place wearing my swimsuit — but there were plenty of examples. It’s not like this was an official “topless beach,” it was just a normal public beach, and if you wanted to sunbathe topless, you could. This was the first time I had ever been to a French beach, so I didn’t know, but I’ve since heard it’s the norm here. And I have to say, it was not at all what I imagined a topless beach to be. 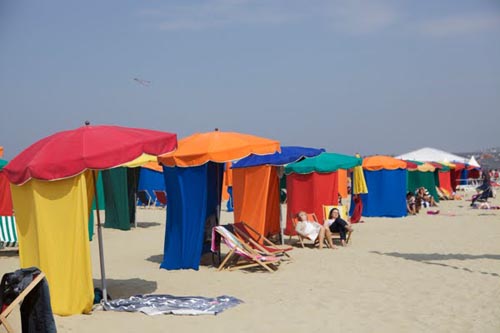 Before I visited Deauville, the words “topless beach” brought to mind something scandalous — like a frat party from a movie or a glimpse into life at the Playboy mansion. But the women I saw on the beach were not 18 year olds, they were my peers. Some younger, some older, but pretty much all of them with children and a husband, having a regular family day at the shore. I didn’t want to stare, but I couldn’t help notice these were women who had evidently nursed their children. : ) I was unexpectedly impressed by these women. They weren’t trying to draw attention to themselves, and they weren’t trying to be “sexy”, but they were totally comfortable in their skin and they had very normal bodies — among the full spectrum of “normal”.

Now, I realize there are different standards of modesty in different cultures — from burkas to topless bathing. (Fun fact: I’m a Mormon, and there are some Mormons who believe showing your shoulders is immodest.) I also realize that Americans are nutso when it comes to breasts — implants are commonplace, but women go to great lengths to cover up while nursing their babies. Bizarre! So, pretending modesty isn’t part of the equation, my question is: How do you feel about your body? Are you confident enough in your skin to hang out at the beach topless? (I don’t think I am.) Also. Have you ever visited a beach with topless bathers? Was it shocking?