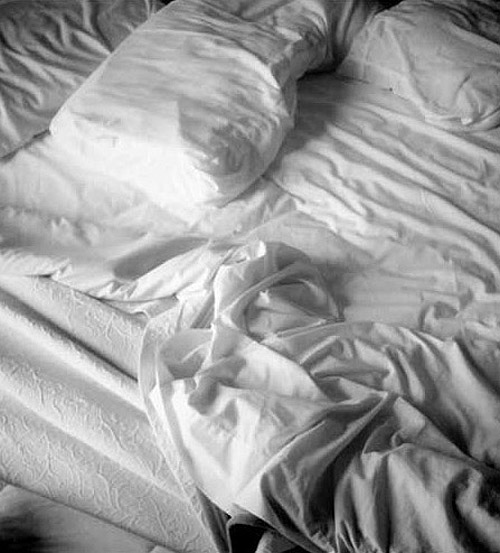 By Gabrielle. Image by Justin Hackworth

For a blog called Design Mom, sometimes I’m surprised how little I get into the nuts and bolts of parenting. I suppose it might be because the longer I’m a parent, the easier it is to see that I really have no idea how to do this job most of the time. And that almost nobody does. There’s a lot of winging it going on! But I was having a conversation with a friend, and her kindergartener is having trouble staying dry at night, and I replied, “Oh! I totally I wet the bed till I was in middle school. I even had to see a doctor about it. My parents handled it really well. And here’s how I learned to stay dry…”

Thinking about the conversation later, I realized I’d never talked about bed-wetting on Design Mom before. But I know a tiny bit about it, and who knows, my experience might help someone out there. So if you’re in the mood for a little only-parents-would-want-to-talk-about-this discussion, read on.

Yep. I wet the bed until middle school. And had a few memorable “accidents” into high school and beyond. As a child, of course I was painfully embarrassed about it, but as an adult it’s basically the least traumatic thing in the world. Outside of parenting conversations, I never give it a second thought.

Among my 8 siblings, I’m the only one that wet the bed. I’m sure my parents thought I would just grow out of it at some point. They never made a big deal about it, and were very discreet about the whole thing. My 4 older siblings knew (how could they not notice?), but they were kind as can be about it — they never really even mentioned it. And they certainly never teased or were cruel about it. So I was super lucky. I don’t know if my 3 younger siblings ever noticed or knew.

The only part that I sensed tension at home about, was that my Mom couldn’t keep up with cleaning the sheets. (I say Mom, because my Dad was not a great housework contributor.) On some nights, I would sleep on a towel over dry but pee-stained sheets. And I remember not wanting to talk to my mom about it because I could see it stressed her out. As an adult, I can guess that the stress was that she was feeling guilty that she wasn’t somehow providing fresh sheets every night, and that she didn’t know how to help me stop wetting the bed. Of course, that breaks my heart, because she didn’t need to feel any guilt. Sleeping on dirty sheets is not the end of the world.

Sometimes late at night, when making rounds and tucking people in, my mom would rouse me from bed and sleep-walk me to the bathroom, and then sleep-walk me back. And I would wake up dry the next morning. Most of the time I didn’t even know she’d woken me up unless I asked the next day.

Outside the house, the stress about wetting the bed is what you might expect. It became an issue around 4th or 5th grade when I started getting invited to sleepover parties. So scary for me! I was very social and of course wanted to go. But I was terrified of wetting the bed in front of my friends. So I came up with strategies. They mostly involved not drinking any liquid all day long and praying over and over again that I wouldn’t wet the bed that night. And sometimes it would work. But not always. Sometimes I would wake up and then have to wait until everyone else left the room so I could hide my wet undies, nightgown and sleeping bag before anyone saw the evidence.

Related, I never felt like I could casually hang out with friends in my bedroom. I needed to make sure there were no signs of bed-wetting before anyone came in.

But again, I was lucky. I had about the least traumatic experience with bed-wetting that a kid can have.

So how did I stop? Well, when I was in 6th grade, my parents decided it was time to see a doctor about this. I still hadn’t grown out of it, and it hadn’t even slowed down. Alas, the doctor happened to be the father of a boy in my 6th grade class, which was about as mortifying as it gets for an 11 year old. I was absolutely postive the doctor would be discussing my bed wetting at his family dinner that evening. But aside from that, it was really just a check up. And no, there was nothing in particular that was causing the bed wetting.

The conclusion was that I was simply a really deep sleeper — that I peed in the night and never even noticed it had happened. And this is true. I am still a very deep sleeper. And I love sleep. If I had to pick between sleeping and eating, sleep would win every time.

So what to do about the bed wetting?

Well, the doctor recommended a couple of options. First, there was some sort of device that I could wear at night that would detect moisture. If I started to pee, the device would set off an alarm to wake me up, so I could head to the bathroom. The idea was that eventually my body would learn to wake up at the same time every night and the problem would be solved.

I didn’t want anything to do with option 1. It drew tons of attention to the problem. The alarm might wake up my siblings! And the device was sure to be uncomfortable. And what was so wrong with sleeping through the night? Disrupting sleep seemed like a bad idea. If my parents had forced me to try option one, I’m sure there would have been many, many tears.

So then, it was option 2. With option two, I was instructed to drink whatever I normally drank in the morning (it was the 80’s, so that meant a glass of orange juice made from frozen concentrate). Then, I should go to school, or go about my day, and continue drinking normally (at lunch, at the water fountain during recess, etc.), but I was not supposed to pee until after school, say 3:30 or 4:00 PM. That’s right. I was just supposed to hold it for 8 or 9 hours. The idea here was to stretch my bladder so that it was capable of holding enough pee to get through the night.

So I went with option 2. And except on rare occasions, for the rest of 6th grade and into 7th grade, I never peed until after school.

My bladder grew. And I stopped wetting the bed.

Except for a few “accidents” over the years, including at a babysitting job on a couch, at a sleepover with the two most popular girls in high school during my senior year, and once when I was very pregnant with Maude  — and went to the hospital thinking my water had broke. Sigh.

So that’s it. A pretty simple fix. I’m no expert, and there are no doubt new methods and research about bed wetting that I’m not aware of. But I’m sharing this in case it helps, or offers reassurance to anyone out there dealing with this. No guilt, Friends! It’s going to be okay.

P.S. — I assumed at least one of my kids would have my bed-wetting genes, but not one of them followed in my footsteps. Such a waste of my “vast” bed-wetting knowledge. : )

P.P.S. — TMI warning: As an adult, my 9-hour bladder means I still rarely take bathroom breaks during the day. And never during the night. In fact, during my pregnancies, one of the things I found most bothersome was having to use the bathroom multiple times throughout the day, because the baby was taking up valuable bladder space. Hah! I found it so disruptive.