You already know that one of the all-time favorite dips is spinach artichoke dip, but why not mix it up a little bit? This jalapeño version is just the thing to add to any party table, to bring out on a night of board games with friends or family, to take to a get-together, or anytime, really. There’s something about the way goat cheese gets extra creamy when it’s baked, plus that undeniable tang. Oh, it’s so good!

Jalapeños really do shine in this dip. You leave the jalapeños in larger chunks so you know they’re there. And don’t remove the ribs and seeds because the spiciness gives it character. Or do remove them if you want it more on the mild side.

The artichokes kind of take on more of a supporting role. If you can find a jar of grilled marinated artichoke hearts, go for those. They have a tad more flavor, but any marinated artichoke hearts will work. (Note: the ones bottled in oil are less vinegary than the ones packed in water.) You can even use frozen ones in a pinch, but you’ll need to adjust the seasonings a bit by adding a little salt and some lemon juice.

For cheese, it’s a combo of Monterey Jack or Pepper Jack, with Parmesan. You get the ultra creaminess of Jack cheese plus the nutty flavor of Parm, and it is magic with the spicy jalapeños. If you are an artichoke dip fan, you’ll love this take, even without the spinach.

If you’ve got a cast-iron skillet, now’s the time to bring it out. It’s a fun way to present the dip, and the cast-iron keeps the dip hotter for longer — plus, it means one less dish needs to be washed because you use it for sautéing the veggies too.

You can serve this dip with everything from crackers to veggies to baguette slices to corn chips. 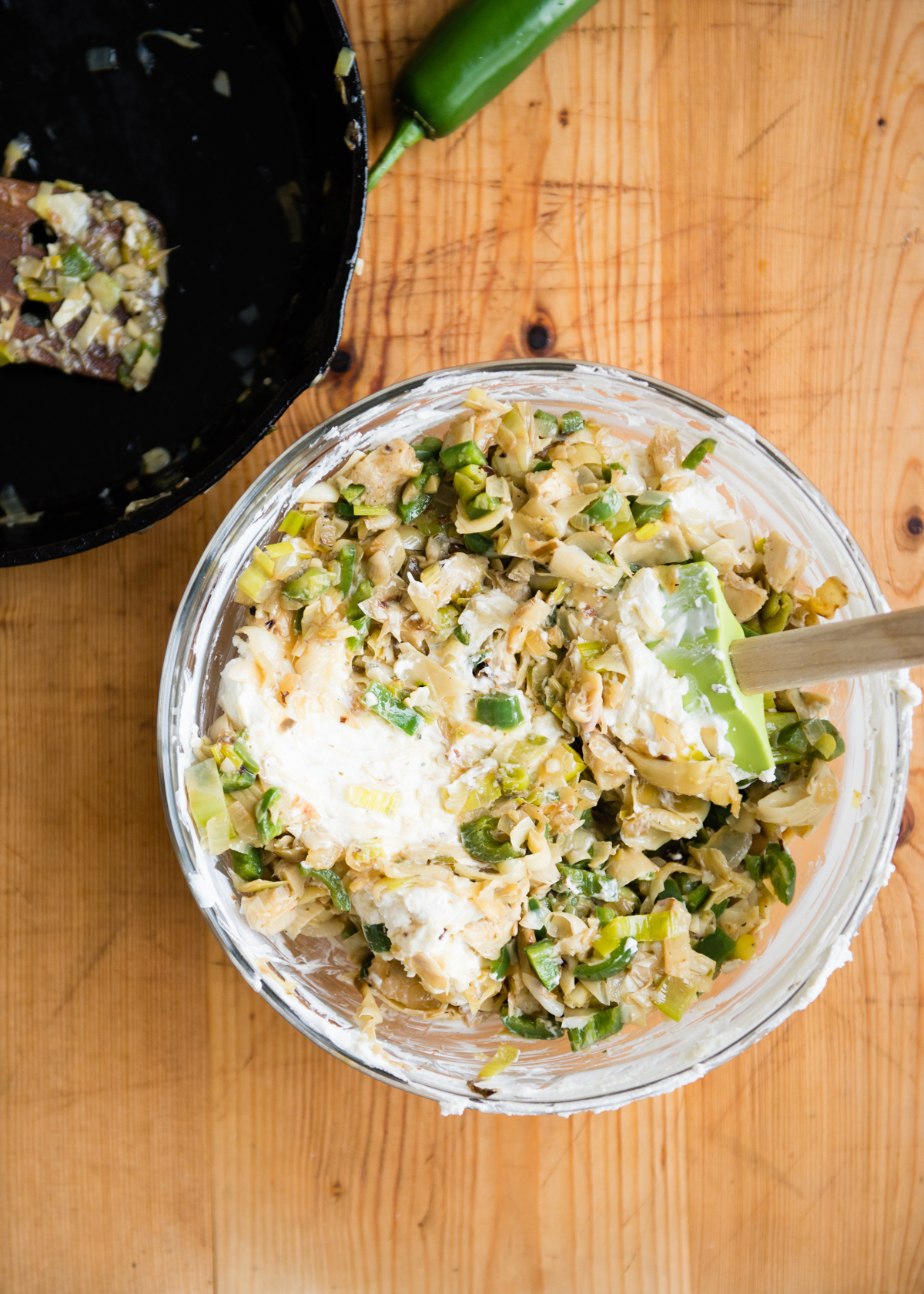 Instructions:
1. Preheat oven to 350°F. Have a 2-3 quart baking dish ready, such as an 8-inch square glass pan, or use an oven-safe skillet such as cast-iron.
2. Heat a large skillet, such as cast-iron, over medium-high heat. Add the butter and let it melt. When the foaming subsides, add the onion and leeks. Cook, stirring occasionally, until they start to soften. Add the garlic and cook for 30-60 seconds longer, until fragrant.
3. Next add the diced jalapeños. Cook, stirring occasionally, for 2-3 minutes. Add the chopped artichoke hearts. Remove from heat and let cool slightly.
4. Meanwhile, in a large mixing bowl, combine goat cheese and sour cream. Add the shredded cheese and stir well, followed by the onion and jalapeño mixture, and black pepper. Stir until very well-combined.
5. Spread the dip into the baking dish or back into the oven-proof skillet. Sprinkle top with the 1/4 cup Parmesan cheese. Bake for 45-50 minutes, or until bubbly all over and golden brown on top.
6. To serve – top the hot, bubbling dip with the remaining sliced jalapeño and green onions. Serve hot with corn chips, veggies, crackers, or sliced baguette.

Notes: You can substitute cream cheese for goat cheese if you prefer.