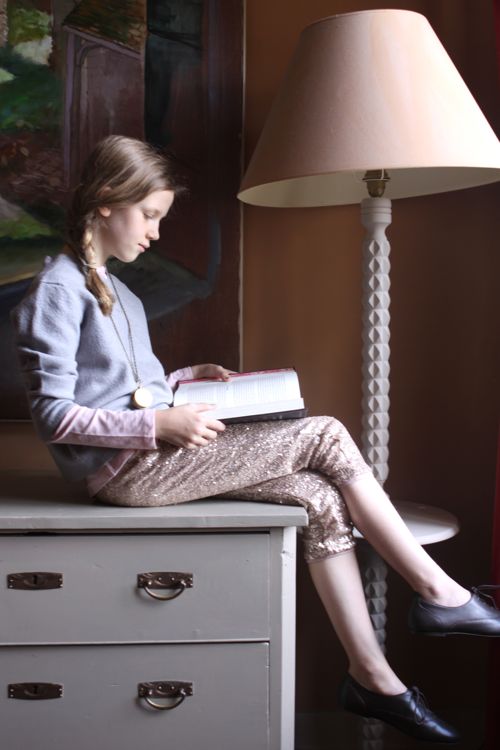 Hey there! It’s time for some What to Wear to School posts. Let’s start with Olive Jean Blair. She just turned 11 and started 6th grade here in France. Fun fact: because of different age enrollment guidelines, in Colorado she would be starting 5th grade. 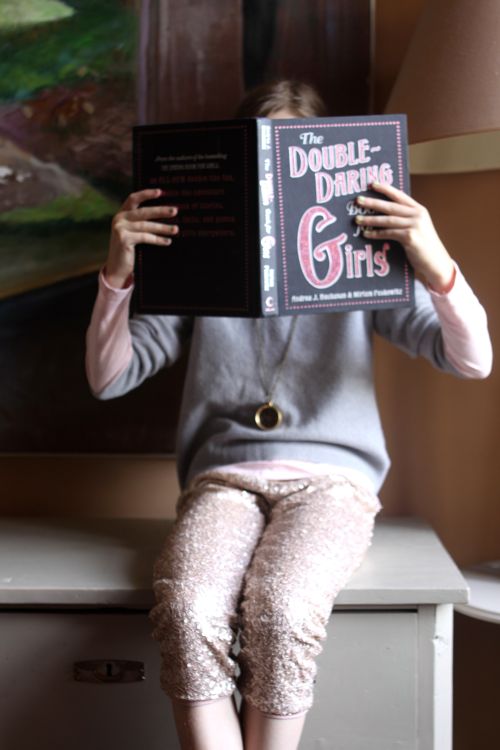 In this first outfit, Olive is wearing pale-pink sequin capris we found at a Next outlet near Dover, England. Her pink layering tee is from Carrefour (a Target-like French grocery store chain) and the dark brown oxfords are too. The grey wool v-neck sweater used to belong to Ralph, but it was accidentally washed and now has a cropped, shrunken, felted (but still cute) look. The necklace is by Truebirds. 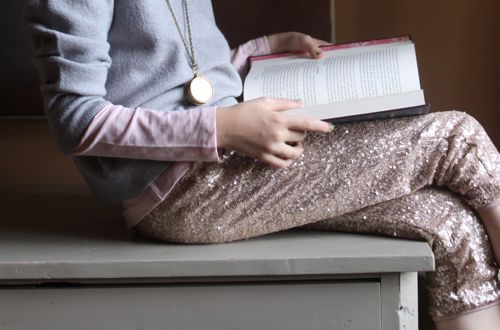 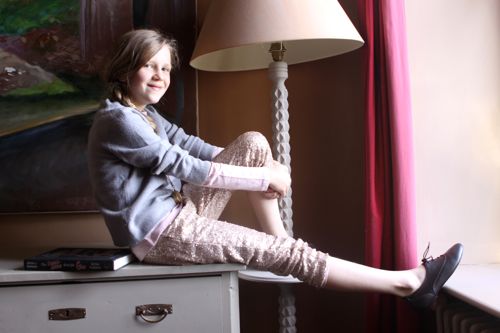 For years, bright green was Olive’s favorite color, but recently she’s had a change of opinion and currently there isn’t a bit of green in her wardrobe. 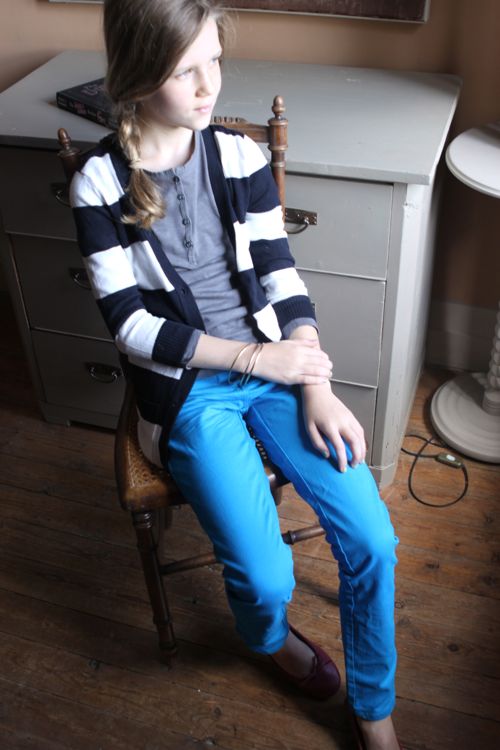 Outfit number 2 is made up of turquoise skinny jeans from a grocery store in Bern, Switzerland. The grey layering tee and rose ballet flats are from Carrefour. (Man, we get a lot of clothes from grocery stores.) The stripey cardigan is by Abercrombie. The bracelets are borrowed from her big sister. 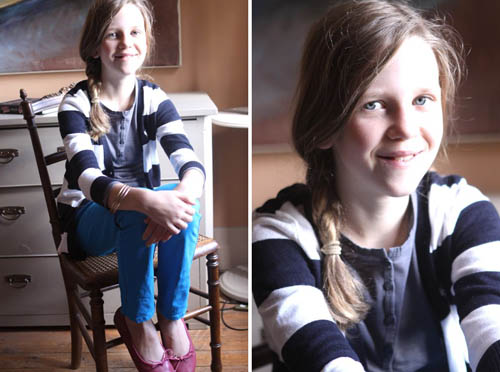 One side note: in the States, my kids preferred not to wear Abercrombie because they felt like it somehow stereotyped them in a certain. But the brand was just introduced in France since we moved here, and it’s quite coveted among their French schoolmates. So my kids have had a change of heart.

It’s been interesting for them to see what brands mean in different places. 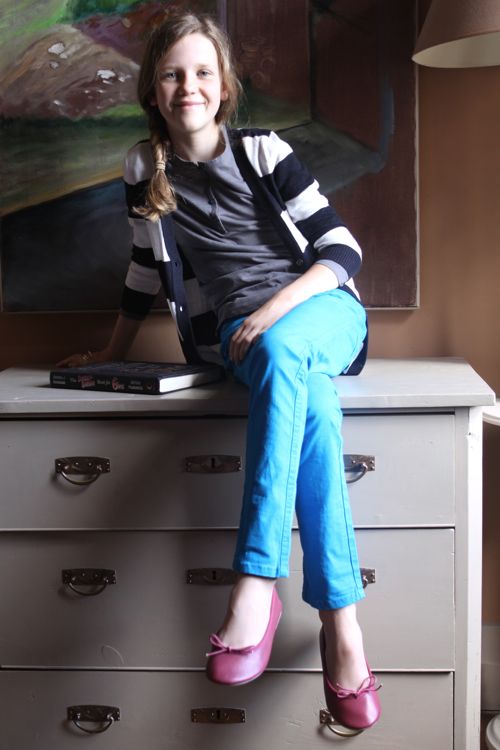 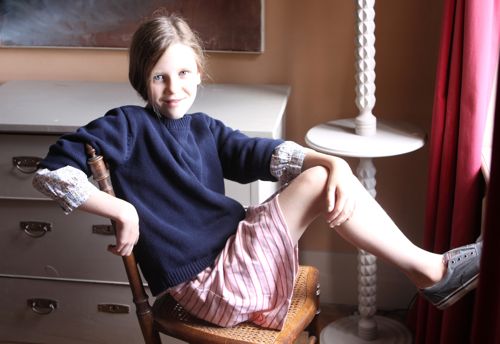 You may recognize outfit #3 from the French Bakery episode of Olive Us. The boat-neck sweater and stripey skort are from Olive Juice Kids (a fitting line for our Olive : ). 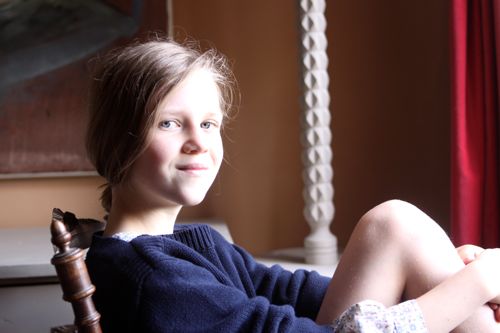 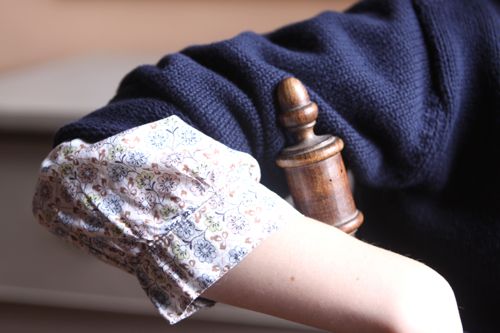 The patterned shirt worn beneath the sweater is a lovely hand-me-down from the owners of La Cressonnière. (Did I ever tell you they left a box of darling clothes for us that their children had outgrown?) 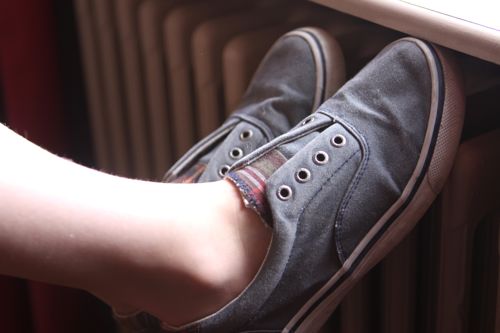 The shoes are from the Payless boys department. I like the plaid tongues. 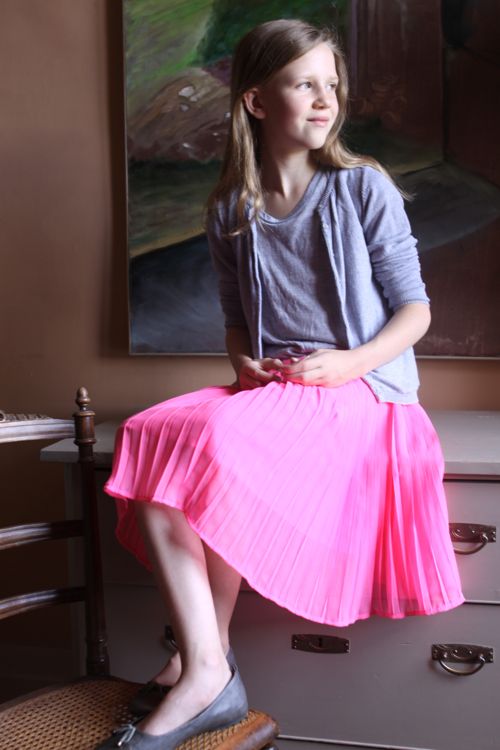 Outfit #4 was another find on the clearance rack of the Next Outlet. The skirt is actually attached to the heather-grey tee to make a dress. Olive added a cardigan that she already owned. And the flats are a pair that Maude grew out of. 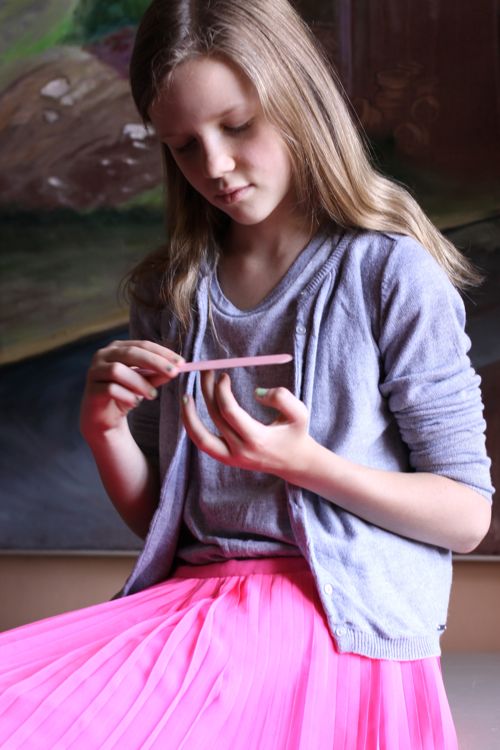 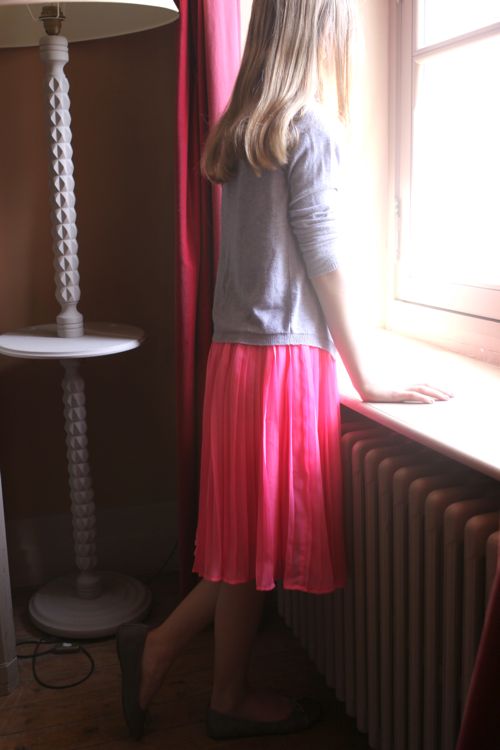 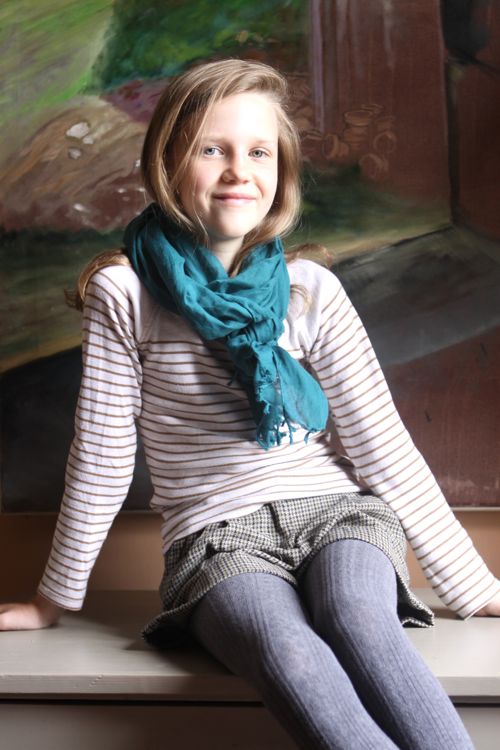 Outfit #5 is a straight up hand-me-down from Maude. In fact, you see the same outfit on Maude in last year’s shoot. : ) 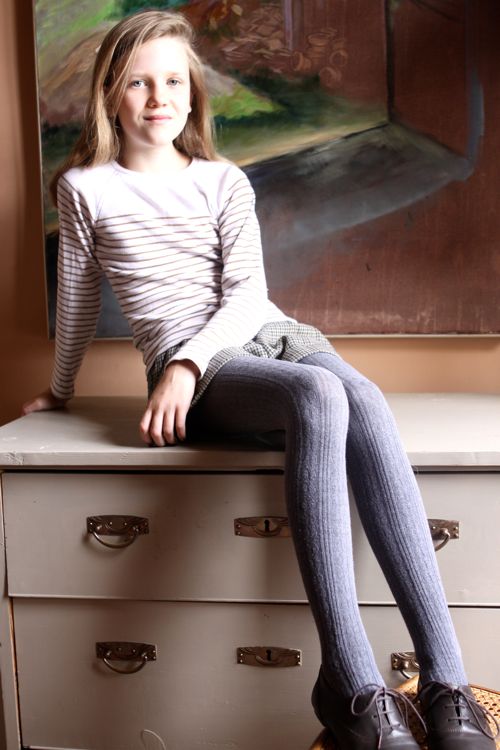 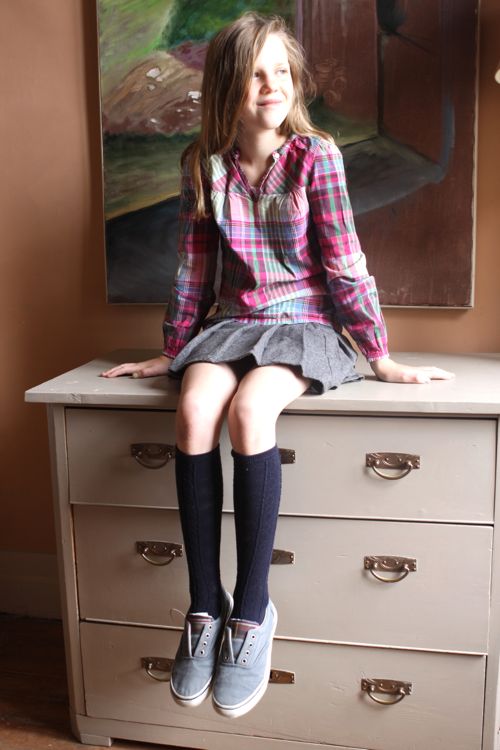 Outfit #6 has some old and new. A pair of cable knit knee socks from Children’s Place. A pleated skirt Olive wore on the first day of school last year. And a plaid blouse that’s been in the family for years now. (The sneakers were already mentioned above.) 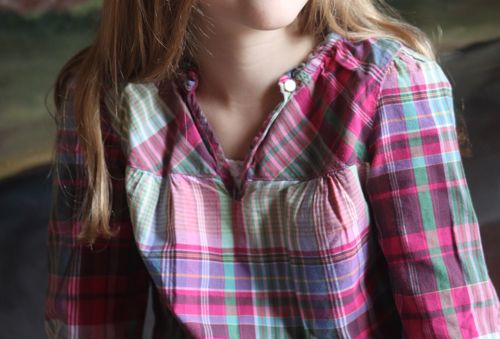 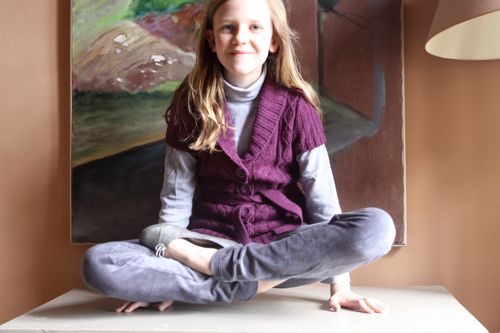 Last but not least, we wanted a particularly comfy, cozy outfit because winters here are chilly. And even while lounging around the house, it’s nice to have on layers. So outfit #7 has a focus on comfort. The silvery-grey leggings are from Carrefour. The turtleneck was already in Olive’s closet (purchased for her school ski trip). And the purple cardigan is one Maude grew out of, originally from Zara (I think). 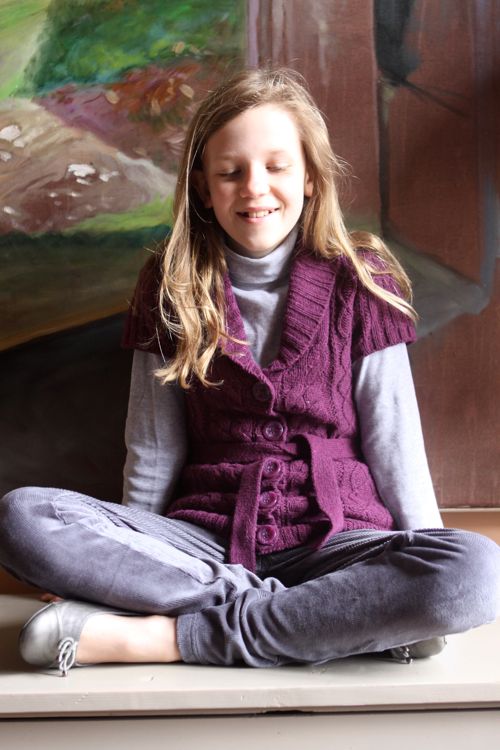 56 thoughts on “What to Wear to 6th Grade – Euro Edition”