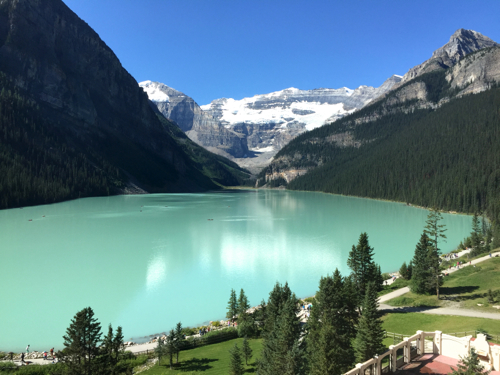 It’s been about 5 weeks since our anniversary trip to Lake Louise, but I wanted to tell you all about it before I forget my best tips — and also because it’s fun to write it up and remember our little getaway. Gosh it was a good trip! When we planned it, we were hoping for a romantic destination — gorgeous hotel room, room service (it was our 20th anniversary after all). But we were also interested in using this getaway to do a lot of planning and goal-making for our next 20 years — so we wanted a place where we didn’t have a mile long wishlist of things we wanted to see.

Turns out Lake Louise was perfect! We didn’t really know anything about the area at all before we booked our room. I’ve mentioned it before, but the only reason I even knew about it, is because I had seen photos in an issue of Victoria magazine when I was 19 years old. Hah! 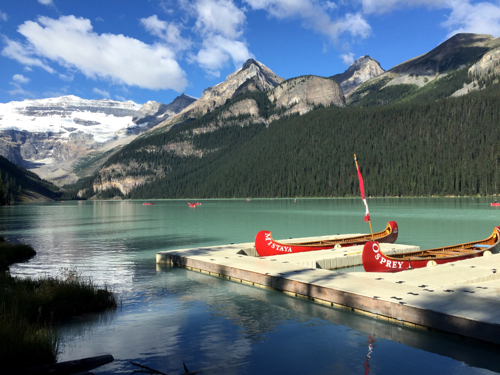 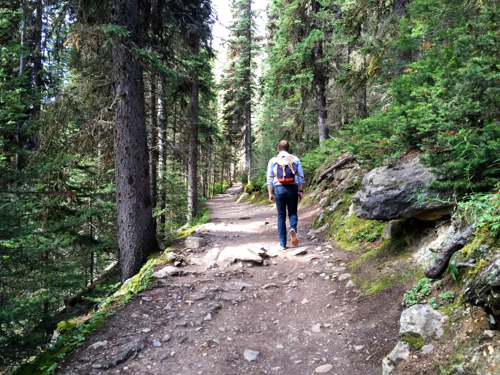 The photos in my memory were so magical that I was more than content with the idea of getting to see the lake, and then sitting in the hotel room working on goals for the rest of the trip. That’s not what happened, but since I didn’t know anything about the area, there was nothing but “see the lake” as far as my destination expectations were concerned. 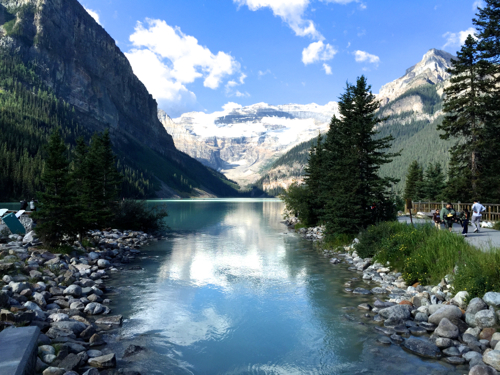 And that lake! I was sure it couldn’t be as beautiful as it was in pictures, so I actually tried to have low expectations as we approached. But there was no need. Lake Louise is so beautiful it almost looks pretend. It’s stunning!

It’s an adventurous sort of place. If there are theaters or museums or fancy shopping around, I didn’t notice them — they were definitely not the focus. Here it’s all about taking in the magnificent scenery and hiking and getting out on the water. And we did all of that — plus, also worked on our goals. It was pretty much heaven! 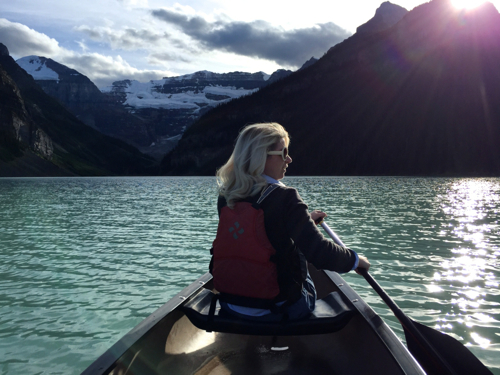 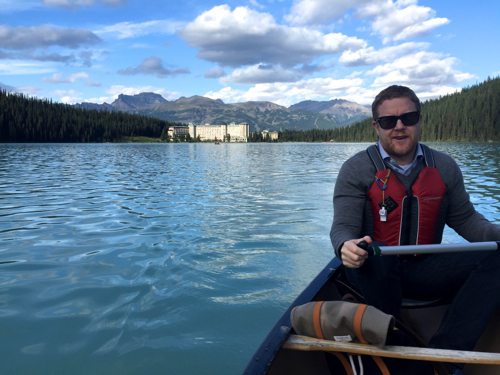 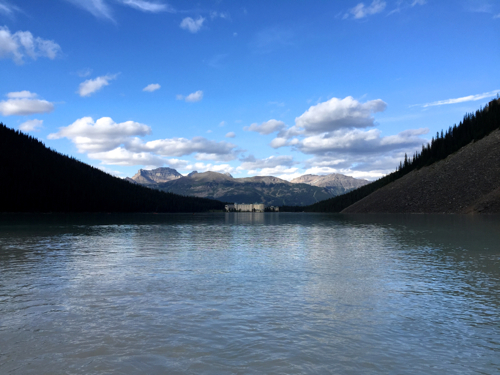 If you’re headed to Lake Louise (which you totally should be!), here are my 5 don’t miss recommendations:

1) Canoeing on Lake Louise.
Red canoes, blue water, white glacier, green trees. It doesn’t get more picturesque than that. Go first thing in the morning, or take one of the last boats out and catch the sunset while you’re on the water. Either way, you’ll totally miss the crowds. 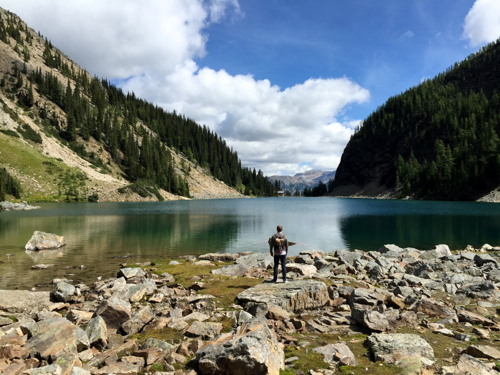 The Teahouse is unique because there’s no electricity there, and no vehicle access. None! Which means that everything at the restaurant is cooked on a propane stove. And it also means that supplies are helicoptered in, or brought up on horseback. So cool! The food was excellent. They have a hundred different types of loose leaf tea, and fresh-baked goods daily.

Unless you get there really early, expect a line. Happily, the wait went pretty fast, and the food was worth it. Things to remember: It’s cash only (no electricity means they can’t take credit cards). Also, there aren’t even trash cans there — if you bring a picnic, you’ll need to pack out all your own trash. 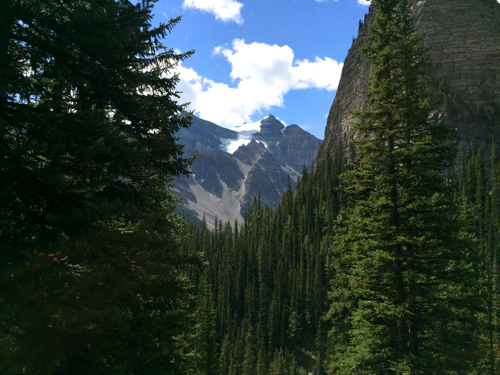 It’s not a super hard hike, but I confess, it was harder than I was picturing. I had a lazy lake-side walk in my head, but it was a true hike. The nice thing is, you’re rewarded with epic mountain views as you walk. 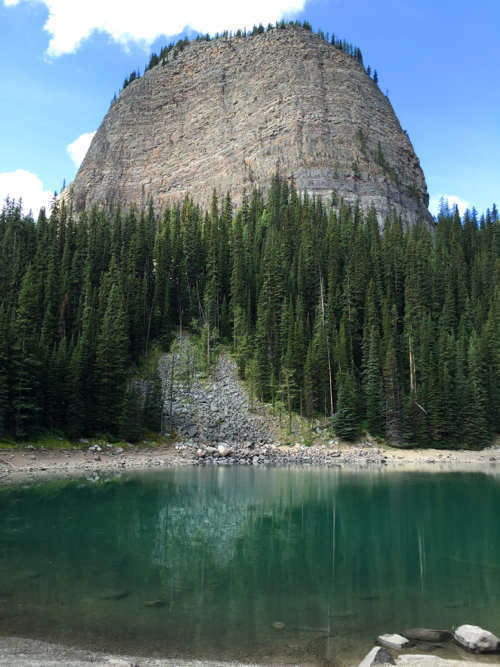 On the way, you’ll also get to stop at Mirror Lake. See that big mountain above the lake? It’s called Big Beehive. We hiked to the top of it! And it’s #3 on my list.

3) Hike to the top of Big Beehive.
We didn’t originally plan on hiking Big Beehive, but when we got to the Lake Agnes Teahouse, the line was long, so we decided to hike further and eat afterwards. First, we thought we’d just hike around Lake Agnes for a bit, but ended up doing the full hike. Totally worth it!

The hike is mostly a series of switchbacks that take you up, up, up! I had to stop many times to catch my breath, but other than that it’s not a particularly technical hike at all. In fact, most people were wearing hiking books, and many had hiking sticks, but Ben Blair wore slip-on Vans, and I wore basic Converse, and we were both fine. 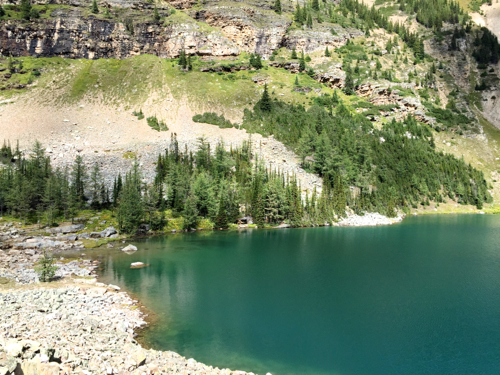 As you get to the first couple of switchbacks you can suddenly see how teal Lake Agnes is. What a color! 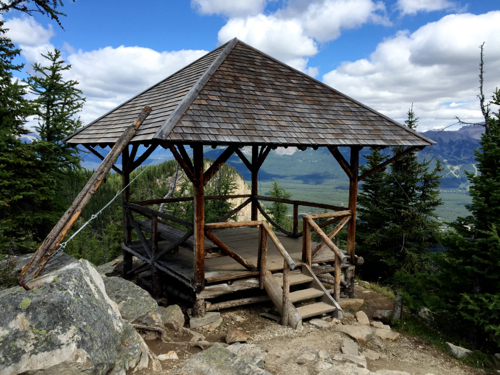 When you get to the top, you’ll find this little structure. Until I got here, I was having the hardest time getting my bearings. But of course, as soon as I reached the top, the views became clear: 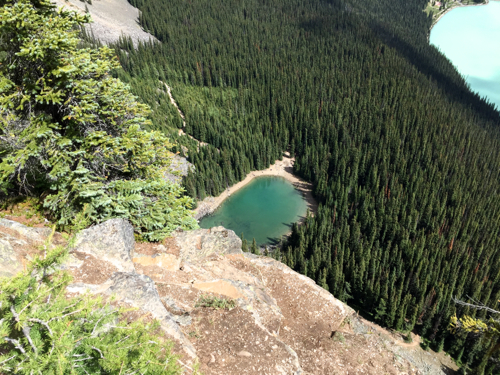 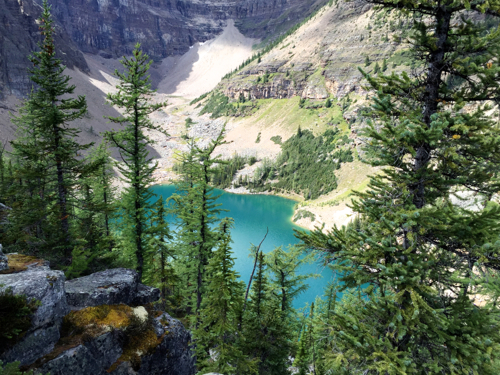 when you look to the left, you’ll see the gorgeous teal Lake Agnes, 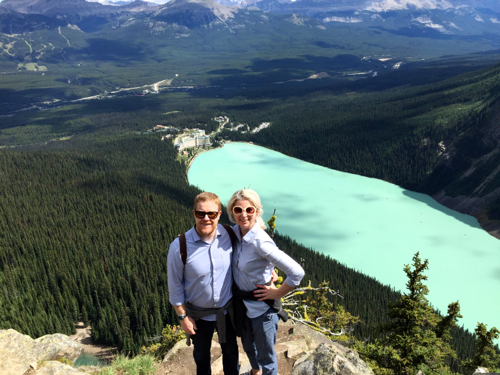 when you look to the right, you’ll see the other-worldly minty green Lake Louise! 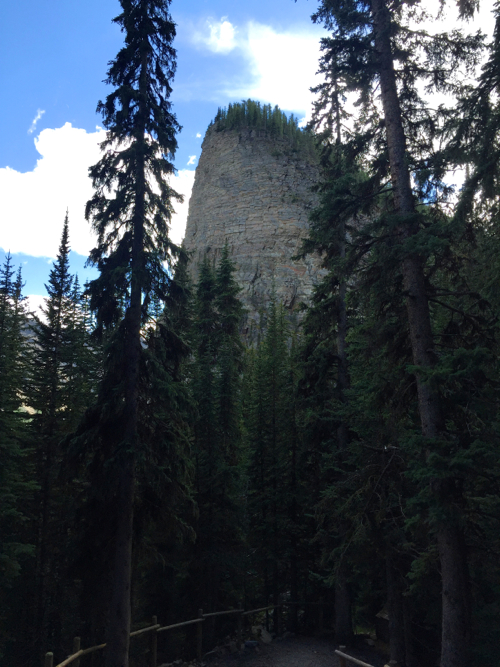 On the way down, I snapped this photo of Big Beehive. It was funny to think we’d been WAY up there! 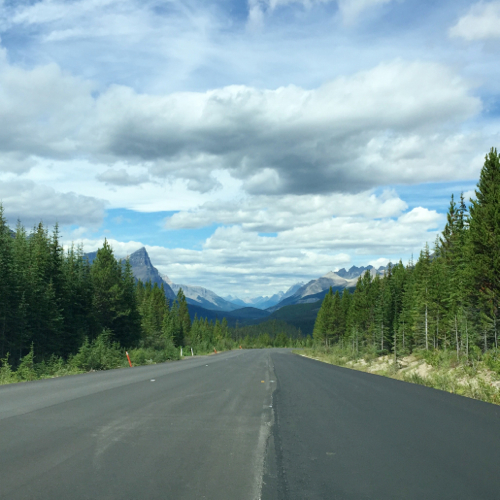 4) Drive the Icefields Parkway.
This is maybe more for grownups, unless your kids love being in the car. The Icefields Parkway is one of the prettiest roads in the world. It goes from Lake Louise to Jasper, and the entire drive is magnificent!

Some people drive point-to-point — for example, they might start at Lake Louise, and then drive the whole parkway, ending at Jasper. They might stay overnight in Jasper, explore the area, and drive back the next day.

But we simply drove until we reached the Columbia Icefields, and then turned around and drove back. We put on a book on tape — The Wind in the Willows — and we would stop the rental car whenever we wanted to snap a photo. Which was many, many times. 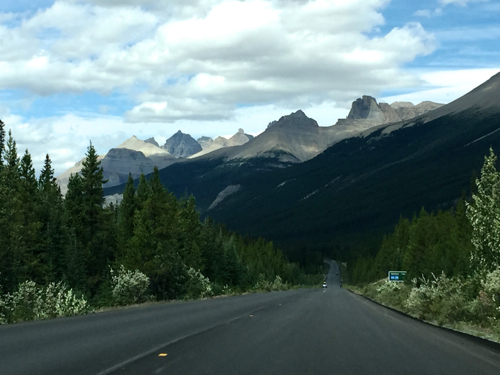 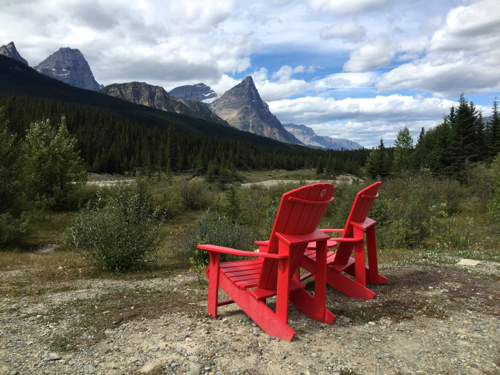 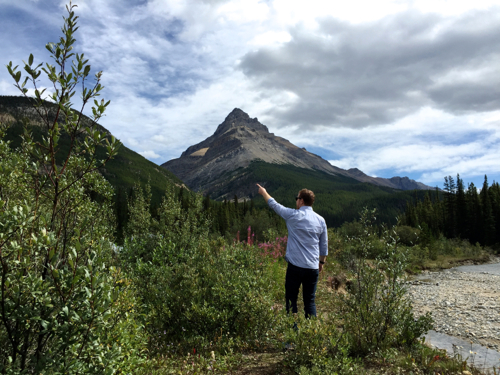 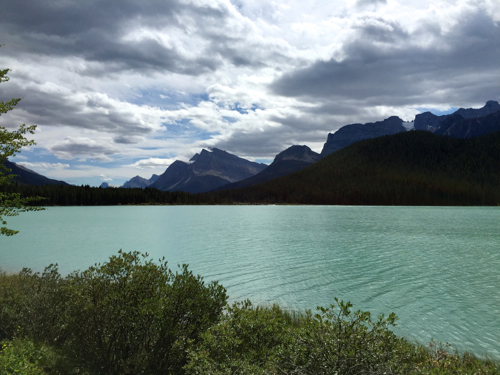 We were there in August — which I assume is probably the best weather of the year. And it was definitely gorgeous! You would think it would be absolutely mobbed with people, and sometimes, Lake Louise itself did feel quite touristy. But there were stretches on the parkway, where we could pull off by a lake and feel like we were the only people in the world.

The whole area encompasses several Canadian National Parks, and obviously, it’s a well-known destination, yet somehow you feel like you’re the first person to discover it. 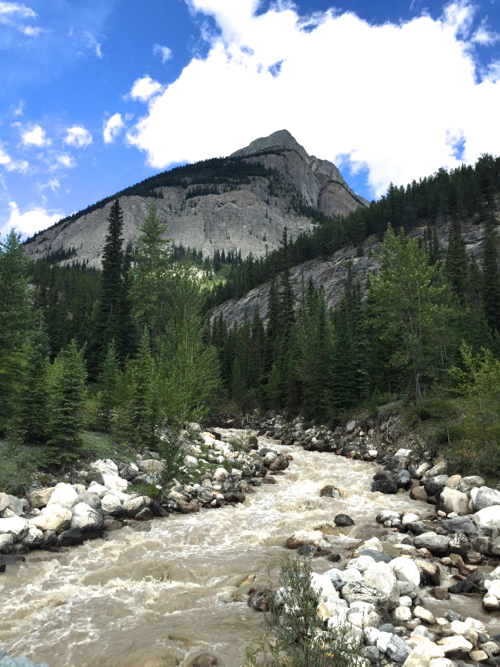 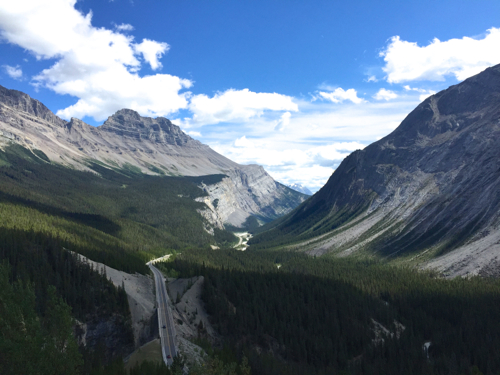 I’ve spent a decent amount of time in the American Rockies and I’m a huge fan, but I have to admit, the Canadian Rockies blew me away! They feel like a much younger mountain range — as though they haven’t been worn down yet. The whole area is simply stunning. It was hard for me to comprehend. 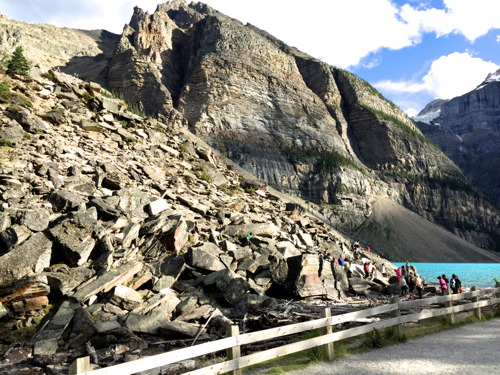 5) Go see Moraine Lake and scramble on the giant rock pile.
Lake Moraine is a short drive from Lake Louise. By the time we got to this lake — on the same day we drove the Icefields Parkway — we had seen a whole lot of glacial lakes, so I confess, I probably wasn’t as impressed as I should be. That said, we really loved visiting!

There is this giant rock pile at the entrance, and it’s wonderful to scramble to the top and take in the views of the lake from above. 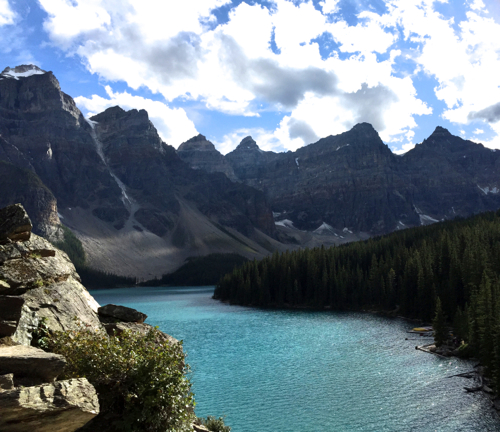 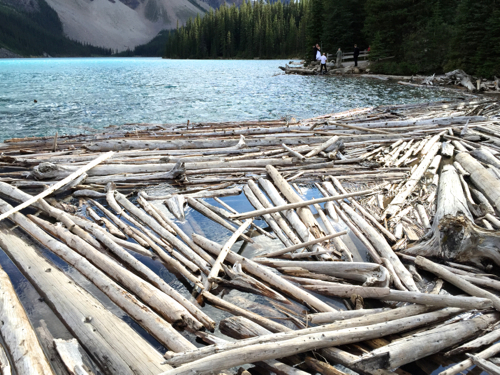 To reach the rock pile, you walk across this log-jam at the base of the lake. Very adventurous! And we only saw one person fall in while we were there. : )

This was the last stop on our trip, and we didn’t have as much time as we wanted there, but if you do have time, you can rent kayaks there as well.

And that’s my little report. I hope you enjoyed it! It makes me want to go back as soon as possible. We weren’t there long — we arrived at Lake Louise on a Monday afternoon, and drove back to Calgary on Thursday around noon, but I can easily say it’s one of the best trips we’ve ever taken.

How about you? Have you ever heard of Lake Louise? Or have you been? I’d love to hear!

P.S. — We stayed at the hotel that’s right on Lake Louise (it’s called the Fairmont), and it is lovely. Very luxe. But there are places nearby that aren’t as expensive, and you can still access the lake in all the same ways that hotel guests can. I’d say worth a splurge if it’s a romantic trip, but with the kids, we might have preferred staying in nearby cabins.

34 thoughts on “Travel to Lake Louise & Do These 5 Things”