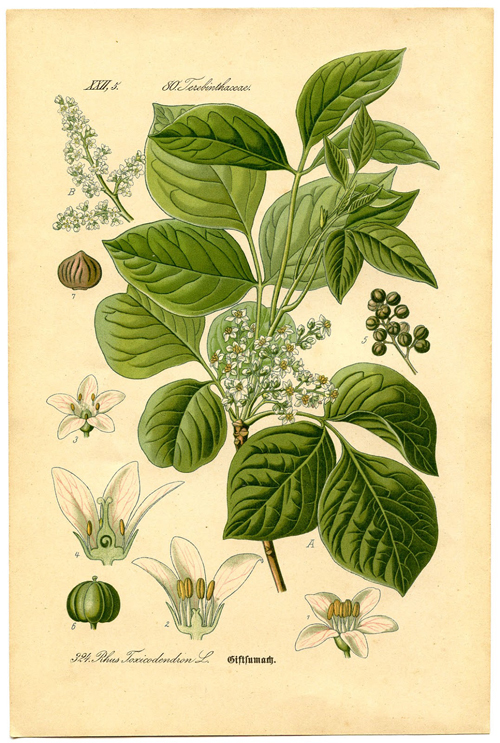 Oh my goodness. At the moment, there is a major portion of my brain fixated on poison oak and poison ivy. Turns out I’m highly allergic! And I’ve been battling some intense poison oak rashes for months. I’ve had shots, used up dozens of tubes of prescription cream, and taken one million showers to ease the itch. (Oh the drama! Hah!) Remember the red dress I wore to the Iris Awards? It was chosen because it covered my poison oak rash all over my arms and legs.

2) Not everyone is allergic to these plants, but most people are — 85% of people have some sort of reaction. I seem to be on the highly allergic end. I swear, even if I don’t touch any plants at all, if it’s nearby I seem to break out in a poison oak rash. Luckily, no one else in the family (Ben Blair or the kids) seems to be quite as affected as I am.

3) The rash is intense. It goes deep and gets these nasty weeping blisters. So gross! For me, it doesn’t seem to improve at all on it’s own. I have to get medical help before I see improvement.

4) To ease the pain, someone recommended taking a super hot shower and putting the rash under the shower stream. She said to hold it there until it’s like a “good” pain. I followed the advice and found it totally works for me. Doing this can relieve my pain and itching for up to an hour. Though I should also note, no doctor has ever mentioned this to me, so I don’t claim it’s an official treatment. : )

5) Once it clears, you can see the scars of the rash for months and months — I had some on my leg that lasted a full year.

6) The thing that causes the rash (and that both poison oak and poison ivy have in common) is urushiol oil. It’s invisible, but it can rub off from the plant onto clothes or shoes or skin, or onto gardening tools or pretty much any surface.

7) Apparently, the urushiol oil stays toxic indefinitely. So if your garden rake comes in contact with poison oak, and then you put the rake away for the winter and don’t touch it again for 6 months, the oil would still give you a rash when you pick up the rake again.

9) The rash doesn’t show up instantly. It can take 8 hours or more. So again, you may not even know you’ve come into contact with any of the plants or oil until the next day — at which point it’s too late to wash the oil off before it does damage.

10) Because you can’t see the oil, it can come into your life without you knowing it. Perhaps on your kids’ shoes, or on something like bike tires. Which means, it’s possible to get the rash even if you haven’t left the house!

Turns out number 10 is real the nightmare part for me. Our yard is like a bit of forest, and in the wild parts, poison oak thrives. We’ve removed as much of it as we can — and hired professionals to help too — but sometimes it grows back faster then we can keep up with it. So when the kids go exploring (which we want to encourage), they might run into some by accident, and then bring it home on their clothes or shoes. Or maybe the soccer ball gets kicked through a patch, and then picked up so the oil transfers to hands, and then the hands pick up the mail as they come inside, and then I open the mail, and then I end up covered in a rash.

But yesterday, I feel like I had a breakthrough in my poison oak battle. My friend Laurie shared this video on Facebook and I found it so helpful! Apparently the trick to getting the oil off is using a washcloth instead of plain soap and water. Take a peek:

Pretty awesome, right? I feel so much more confident about keeping the rash at bay now. Hopefully, some of you find it helpful too!

Tell me, friends: Have you ever had a poison ivy/oak rash? How about your kids? Do you have any tips that worked for you? Or any other pieces of info you’d add to my list? I’d love to hear.

P.S. — I hear there is a scientist working on a specific light bulb that will make urushiol oil visible. That would be amazing!

80 thoughts on “How to Stop Poison Ivy & Poison Oak”