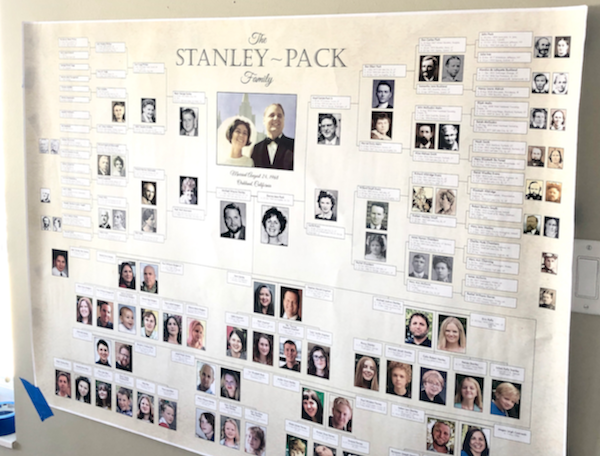 When I was at my mom’s house over the holidays, there was a 7-generation genealogy chart taped to the wall, and I got such a kick out of studying it. She’s so smart about how she had it designed — she made sure all the still-living people had the biggest photos, so that the grandkids could see themselves easily and picture how they fit in to this big group.

I was especially interested in those earliest generations, the oldest people on the chart. The chart lists their names, birth dates and cities, and death dates and cities. On my mom’s side, half of those original eight couples came from families who had been here since the country was founded. The city names are familiar to me — lots of East Coast and New England spots that I’ve lived near — places like Pound Ridge in Westchester, NY; Providence, RI; Orange, VT; Fairfield, CT. The other half were Mormon immigrants, coming from England, Ireland, and Wales. After getting to America, they would eventually cross the country with wagon trains, or take Ship Brooklyn from New York to San Francisco.

I knew most of that info already. A lot of family history has been researched and recorded on my mom’s side (Mormons love genealogy!), and I’d heard many of their names and stories.

My dad’s side is more mysterious to me. The places listed for the earliest generation? Two couples are from the South — Kentucky, Arkansas, Tennessee, and Alabama. And six couples are from Germany — mostly Jewish communities in Bavaria.

I had heard about the German Jews in my ancestry, but the Southern connection was totally news to me, and as I studied the chart I had a realization: The two main biases I grew up with were against the South and against Germany.

That’s right, I grew up learning to be biased against a full half of my ancestry.

I’m sure I was at least vaguely aware of these biases as a kid, but didn’t really examine them until I went to college. During my college years I had the chance to visit my sister Rachel and her husband Paul. They are a military family and have lived all over the place, including several years in the South and several years in Germany. I visited them in both of those places, and I remember being aware before each trip, that I didn’t think fairly about either place.

I remember trying to figure out where I’d picked up these biases. In both cases, I concluded it was American culture — it was history classes and movies and books where the “bad guys” were always Germans and the “backwards folks” were always Southern. It seems American culture in the 1980s had not let either place move past their worst point in history.

Lucky for me, it was not difficult to spot those particular biases and recognize that my opinions of Germany and of the South were incorrect. I remember feeling embarrassed and apologetic, and then also realizing I didn’t actually know anyone from Germany or the South (at that time), and wasn’t sure where I should direct my apologetic energy. I also remember wanting to learn more about both places, in an attempt to replace the inaccurate information in my head. And of course, this was long before I knew about my German and Southern ancestry (I mean, I just learned about the Southern ancestry last month!).

Because those biases weren’t based on anything personal or concrete, I didn’t find them difficult to discard. I wonder now if this was especially easy for me to do because my brain was still young and forming?

Until I studied the genealogy chart, I hadn’t thought about those biases in a long, long time. They feel like something that was part of another life. I wonder how I would feel if I had learned about my Southern + German roots and hadn’t dealt with those biases already. Would I be in denial? Would I feel shame?

The chart came to mind again on Monday as we were talking about the racism that people grow up with and don’t always recognize. I’ve also been thinking about how racism and bias are taught to new generations as I watch the response from the Covington Catholic School community and families, which from my point of view has been wholly inappropriate.

It made me curious — do you feel like you recognize your biases? Or at least some of them? Have you ever taken the Harvard implicit bias test?

If you have older kids, do you think they could identify your biases? If you have been able to acknowledge a particular bias, were you also able to overcome it? Or change your thinking? I’d love to hear your stories.

40 thoughts on “The Biases You Grow Up With”