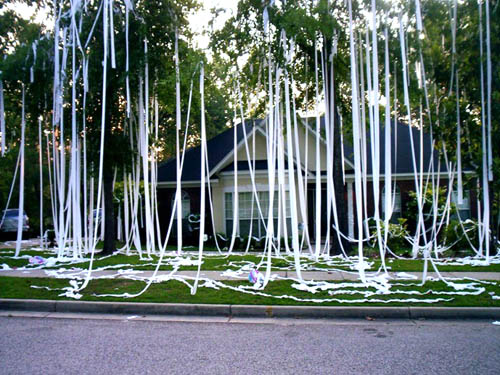 This week, we’re staying at our cousin’s house in Colorado, and yesterday morning, we woke up to find the house had been toilet-papered! Our little kids were wide-eyed with fascination and delight — they had never witnessed anything like this before.

Did you ever go toilet-papering as kid? As a teenager, I loved it. It felt sneaky, and a little cheeky (toilets!), but ultimately harmless. I ran with a pretty straight-laced group of friends (no drinking or partying), so toilet-papering was a good outlet for excess energy on the weekend. We would toilet paper friends’ homes, the homes of boys we had crushes on, even the homes of teachers we knew could take a joke. And I loved when my house was the target as well. I felt like it implied that people knew my family had a sense of humor.

In contrast, a friend that grew up on the East Coast, told me toilet-papering was considered as serious vandalism in her town, and that people were offended by it. So I know it means different things in different communities.

What’s your take: Innocent pastime? Or would you be offended if your house was toilet-papered (no egging, no forks in the lawn, just plain-old toilet paper)? Did you ever try it as a kid? Would you let your own kids toilet-paper someone’s house?