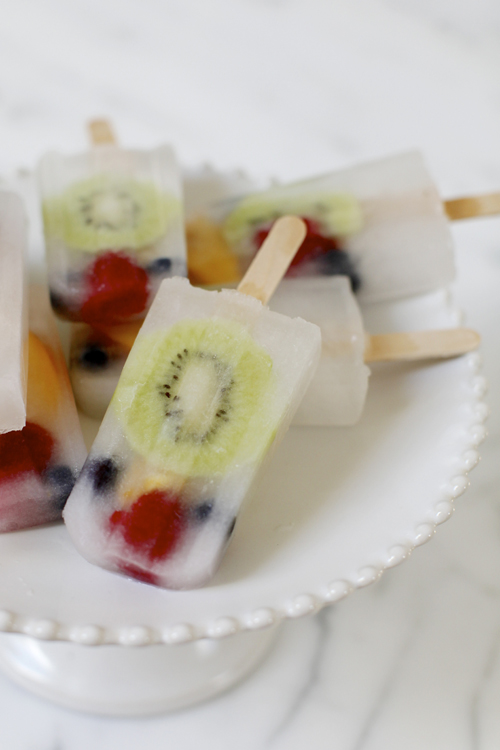 It happened yesterday: a Last Day of School photo showed up in my Facebook stream. The first last-day-photo of the year! Our schools here in Oakland don’t get out until early June, but I can definitely feel things winding down. And as they wind down, the temperatures seem to rise. Which means popsicle weather! In fact, for Betty’s birthday on Monday, she requested popsicles (an assortment of creamsicles, fudgesicles and rootbeer-float pops) in lieu of a birthday cake.

Well, just in the nick of time, my internet friend, Christine Chitnis has a mouth-watering new book called Icy, Creamy, Healthy, Sweet. It’s all about making yummy frozen treats — like ice pops, slushies, and floats — without refined sugars. There are 75 recipes, including vegan and dairy-free options too. As you can see, the photos are gorgeous and I can’t wait to try the recipes! 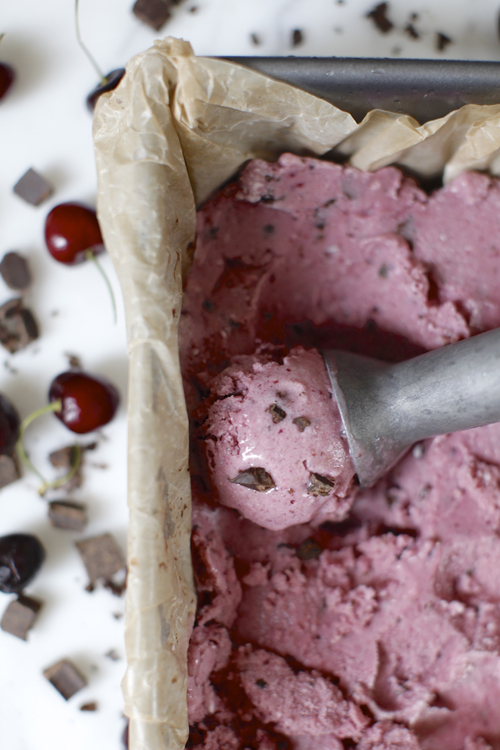 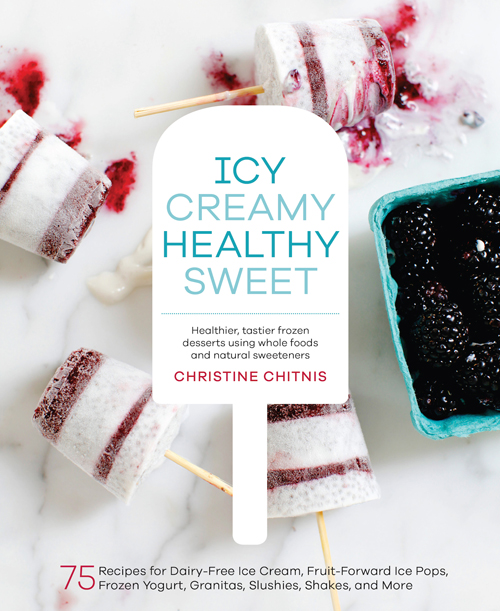 I asked Christine if I could share a recipe from the book here and she sent over one called Firecracker Pops. They are adorable! And I love how simple and wholesome the ingredients are. You can find the recipe and photo when you click through, but before you do, I’d love to hear if you have any memories making popsicles as a kid. I sure do!

I remember filling the ice cube trays with orange juice — the kind of juice made from a tube of frozen concentrate. Remember that stuff? Run the cardboard carton under hot water, squeeze it to get the concentrate into the pitcher, then fill the carton with water 3 times. Hah! It’s been a long time since I’ve done that. After the juice was poured into the tray, I would  cover the it with plastic wrap and insert toothpicks through the plastic. Then I would check the freeze obsessively, waiting for the blocks to freeze. The toothpicks would never stand up straight, so they would freeze at an odd diagonal, making the popsicle challenging to hold. 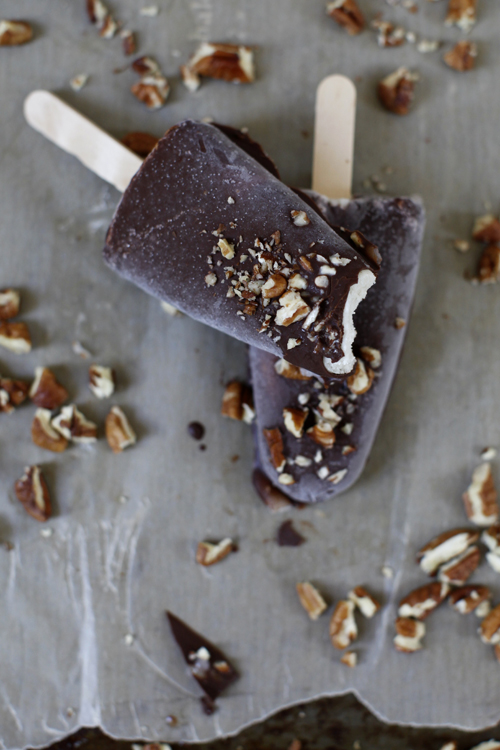 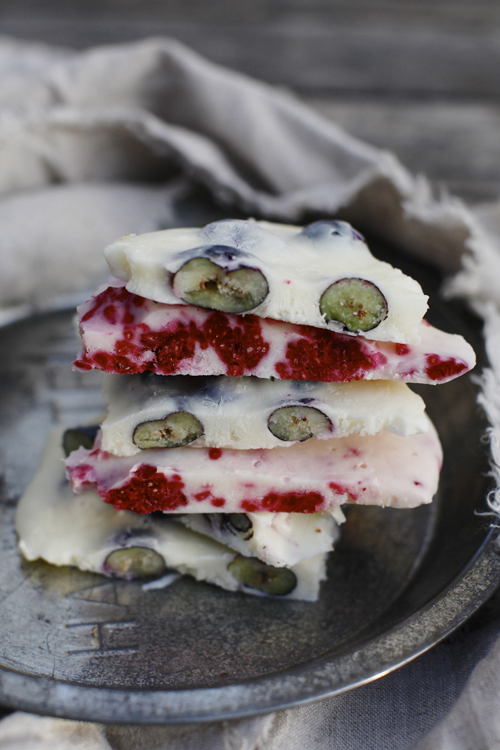 But still! The idea of making popsicles at home seems to be so universally appealing for kids of all ages. Yesterday, 17-year-old Maude suggested we try making pudding pops at home! 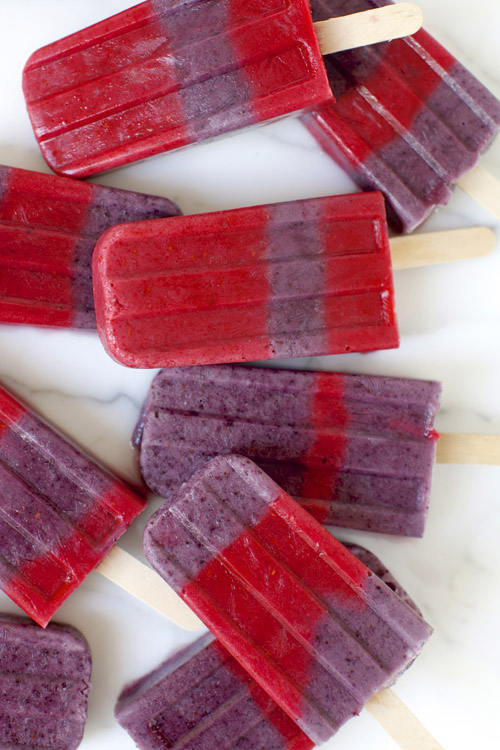 Steps:
1. In a blender, combine the frozen blueberries, 1 banana, 1/2 cup of the yogurt, 1/4 cup of the almond milk, and 1/2 tablespoon of the honey and blend until smooth. Pour into a pitcher or glass measuring cup and give your blender a quick rinse.

2. Combine the frozen raspberries and the remaining banana, 1/2 cup yogurt, 1/4 cup almond milk, and 1/2 tablespoon honey in the rinsed-out blender and blend until smooth.

3. Pour a small amount of the raspberry mixture into your pop molds, followed by a small amount of the blueberry mixture and alternate until the molds are full. For the most part the stripes will hold their place, as the mixture will be thick (work quickly before they have a chance to thaw and become runny); however, if you want perfect stripes, you can stick the molds in the freezer for 30 minutes after every stripe to set the color before adding the next stripe. Insert sticks and freeze for at least 3 to 4 hours, until hardened. 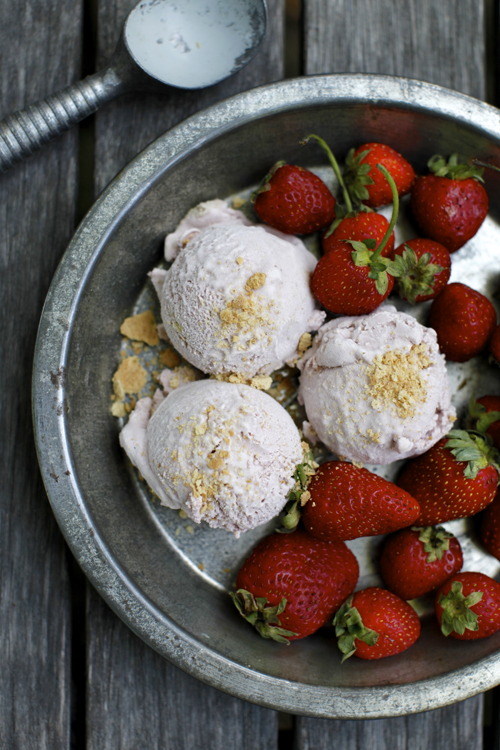 Thank you, Christine! This looks amazing. Huge congrats on your book!

Okay, Friends, now I’d love to hear: have you ever made popsicles at home? Do you have a favorite recipe or fruit combo? And did you ever make them as a kid? Also, have you ever tried the Zoku? I haven’t, but friends swear by it. Apparently it freezes popsicles super fast.