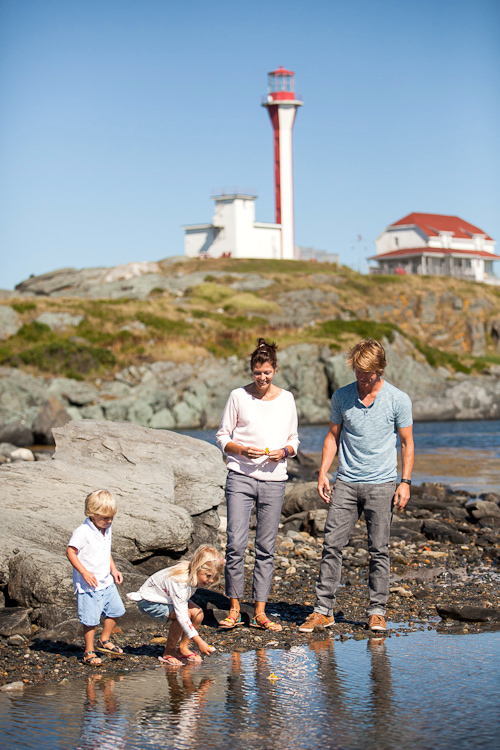 Have you ever heard the saying “Love doesn’t have any borders?” It’s a common thought in Germany, brought to us by Petra, a Munich native who fell in love with a Canadian, and eventually decided to move from a city of almost two million people to a small town called Yarmouth in Southwestern Nova Scotia where the highways end. Literally. 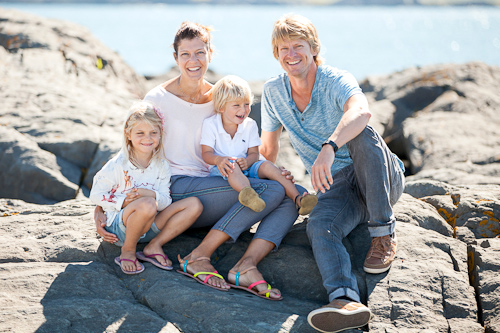 She’s also the beaming owner of 123 Lausbua, a kids’ clothing company whose wares are mostly designed by Lili. I should mention that Lili is almost six and, as it happens, very good at her job. (And as long as we’re learning a spot of German today, lausbua means rascal!)

There’s more to this story, including a lot of happy corners and a lake for a front yard. You’re going to enjoy this one, I just know it. Welcome, Petra! 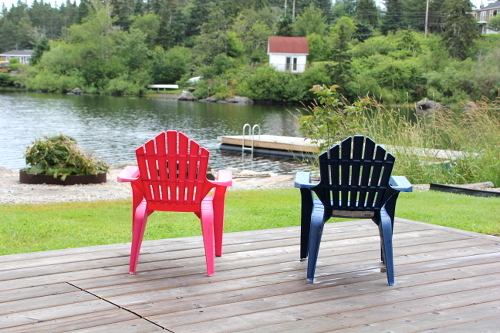 If you would have asked me 20 years ago where I would see myself living in the future, my answer sure wouldn’t have been Nova Scotia! Coming from a small town in Southern Germany, I didn’t even know where Canada’s third smallest province is. Traveling has always been a passion of mine but I had never made it this far East in Canada. Plus, I love the sunshine and my dreams always included living in the South. Now I’ve been living here for almost ten years and I love it. We might not have sunshine every day, but we have the beaches which were also a big part of my dreams! 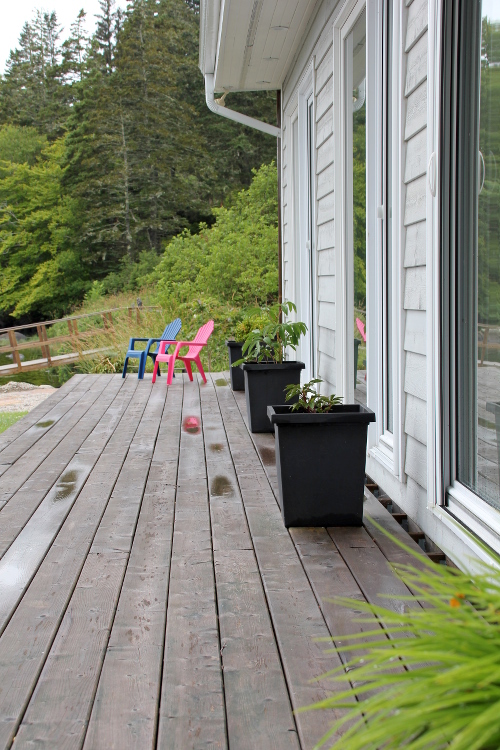 We are a family of four. There’s Jamie, my husband, who is a software developer by trade and the handiest man — besides my grandfather — I have ever known. He can build or do anything. He’s also my best friend and the person I love to spend my time with. 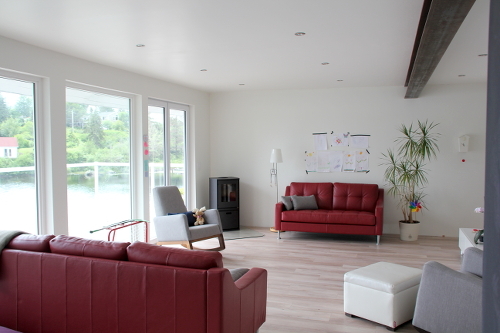 Then there’s Lili, our almost six year old daughter, whose personality is, as I’m told, a lot like mine as a kid. She loves an audience, and she would be involved in every sport or social event if possible. She’s definitely our daredevil. She is strong and very strong-willed. She’s also a wonderful big sister, always taking her little brother by the hand, showing him the world and letting him be part of her imaginative play. 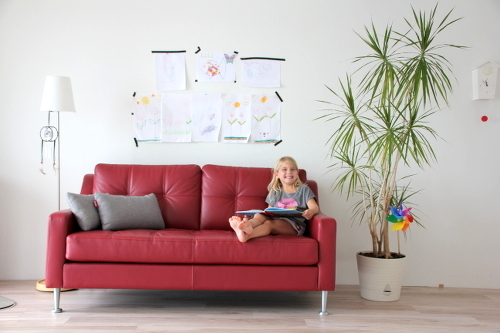 Luis, or Lulu as he calls himself, is our baby. He just turned three. He always tries to make the people around him laugh. If others are happy, he’s happy. He’s also a very sensitive soul and a lot more careful than his sister. He’s generous, cuddly and a perfectionist. So am I.

l’m Petra. When we moved to Canada, I went back to university and switched careers — from a PR manager to an elementary teacher. My days as an educator are never the same, which I love, and working with ‘my other kids’ is very rewarding. My job also lets me show what I am best at: being creative and organized. 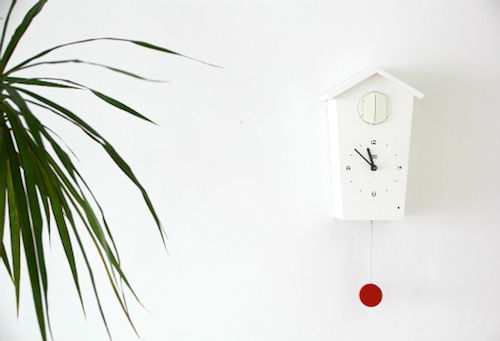 Jamie, who is Canadian, and I met while he was traveling in Europe. After spending a year as an au pair in the United States while my parents feared I’d meet someone from so far away, I happened to run into him at a friend’s house in our town. It was love at first sight. To me, it’s still incredible how we made our relationship work with such a distance between us. “Love doesn’t know any borders” is a German saying, and this was very true for us. We traveled back and forth during our university years but also spent six months in Australia before settling in Munich, Germany. After five years there, Jamie longed not only to be near the water again but also for the vastness and spaciousness that his home, Nova Scotia, has to offer. 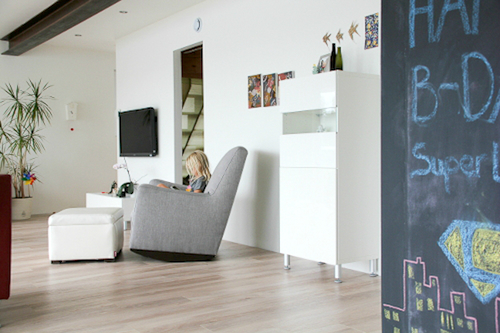 This move was huge. From Munich, where almost two million people live, to a small town called Yarmouth in Southwestern Nova Scotia, where the highways end. Literally. I’m glad I’ve visited there before. Visiting, however, is very different than living somewhere permanently. There are still days, lots of them actually, where I miss home — my family, my closest friends, my culture, and my food! 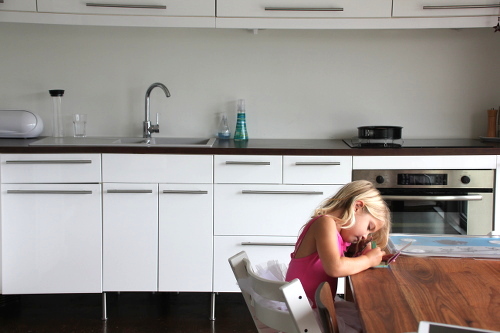 When moving here, I had one condition that needed to be fulfilled: I wanted to live right by the ocean. I always associate the ocean with vacation. As kids, my parents took us to the Mediterranean in Italy, Spain, and Croatia, as a teenager I traveled through Scandinavia, England, Greece — all countries on the water. I knew that if I was moving to a province almost completely surrounded by the ocean, that’s where I wanted to live.

Jamie, being a local, knew better. He convinced me that it is much more versatile to live on a lake. It took me a while to admit, but he is right. The ocean here is not like the ocean I experienced growing up. The Atlantic is cold and so is the wind off of the water. A lakefront home it was, and I never had any regrets! 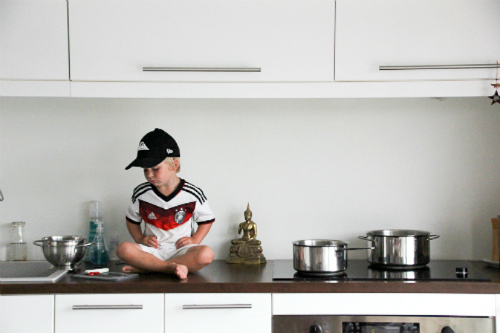 I was still in Germany when Jamie sent me pictures of what became our home, the place we would eventually raise our kids. It was a basic cottage, and very small. But, it was right on the water and a minute’s drive from town. Wow! We would never have been able to afford anything like this in Munich, where an apartment would have cost more than our little house on the lake did. 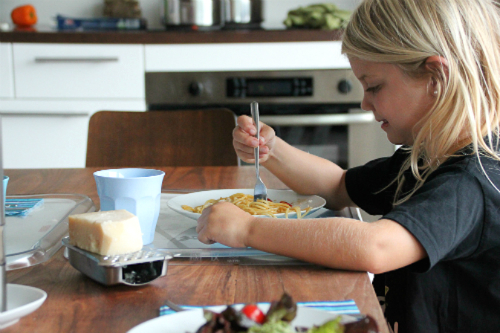 When I finally saw the house in person, there really wasn’t much to think about. After a short drive to the lighthouse, we made an offer and the house was ours the same day. We renovated to make the place livable for just the two of us. We had 572 square feet with an amazing view which belonged to us. It also included a home office for Jamie which he accessed by a ladder. He wasn’t able to stand up in it! 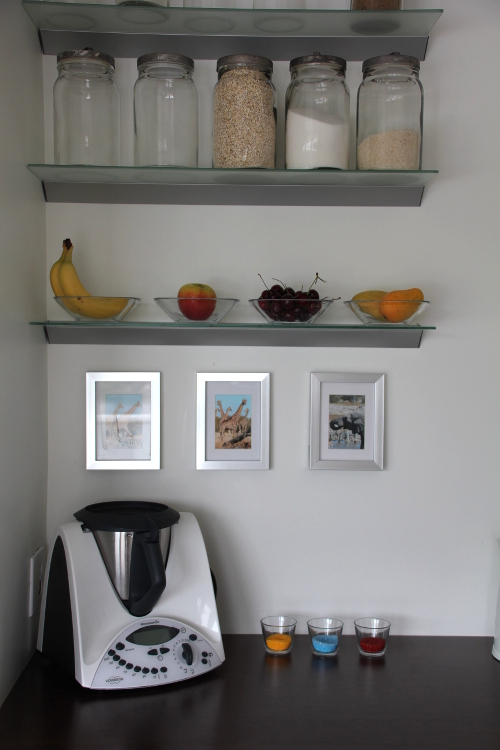 We had big plans, though. A few years later the extensive renovations started which included adding a downstairs (the existing house was lifted and moved just slightly to the left) and a second story to one part of the building. We added 1100 square feet of living space over time. It’s not huge but is very comfortable. Lots of floor-to-ceiling windows facing the lake make it appear very spacious and add a sense of living outside all year long.

Our home is not the traditional Nova Scotian home you might find; the European influence I grew up with and influences from our travels are definitely visible throughout our house. Both my husband and I like contemporary furniture and art, very minimalistic and clean. 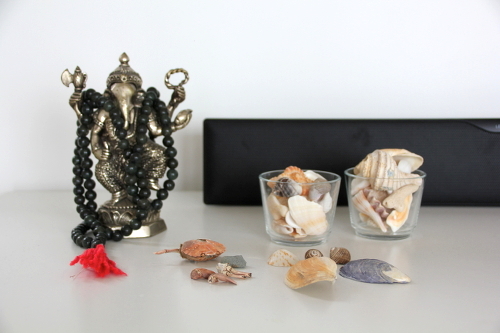 Despite being so little, our kids have seen quite a bit of the world already. They have no choice as we take them to Europe every year. It is very important to me that they know where I come from, that they feel at home there and know the culture as much as the language. They are both growing up bilingual. When we are in Canada, we call it our secret language which makes it super exciting for them. As comfortable as our kids are traveling, home to them is here and they get excited when we turn onto our dirt road and they see their lake. 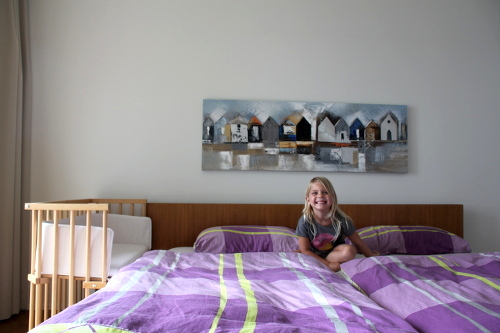 People often comment on our property and how it is not very kid-friendly. Fortunately, we were able to teach our kids both love and respect for the water. It certainly helped to have them enrolled in the local swim program since they were a few months old. We also have rules instilled in them when it comes to the water. They both know, for example, not to go in without an adult nearby. We have had a very hot summer and I think it’s just amazing when their first question in the morning is, “Can I go for a swim?” and I can happily say, “Of course you can!” Any time. 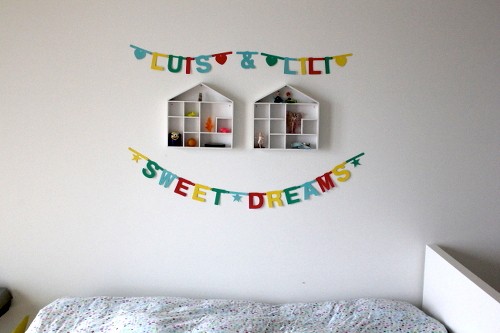 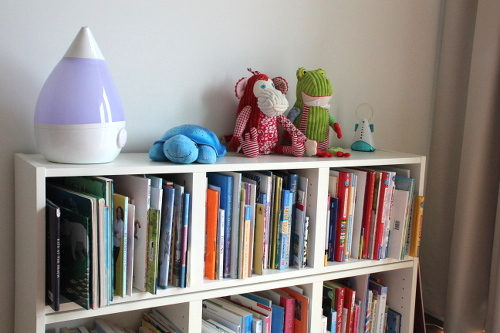 During the summer months, we take advantage of the water daily. Fishing, boating, tubing, kayaking, and swimming. Lili’s newest passion is wake-boarding. She’s getting so good at it! We also use the lake in the winter. How many people can say they have their private skating rink in front of their house? 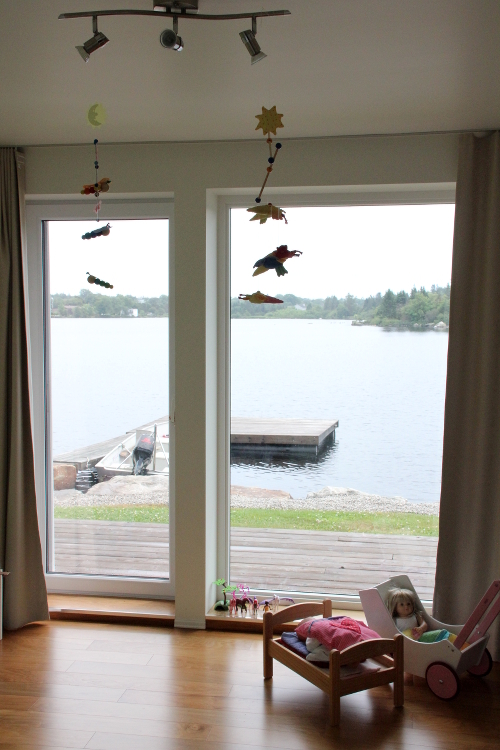 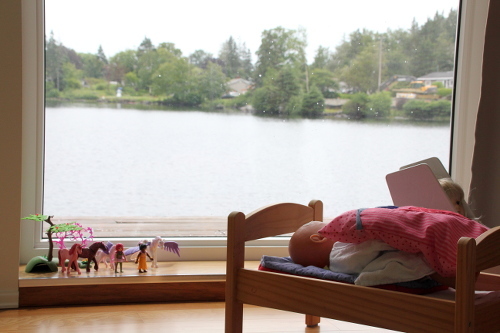 That’s when Luis, our little hockey lover, is in heaven. A bonfire right by the shore keeps us warm on cooler summer nights as well as on cold winter days. There is definitely plenty of the stereotypical Canadian lifestyle happening in and around our European looking house!

To Jamie’s dismay, a few months ago I started invading his office with my newest adventure. I created a small kids clothing line, called 123 Lausbua. I’m in love with modern and simple clothing for kids and have been looking for birthday shirts for a long time. I had no luck and decided to make them myself, with Lili as the designer. All the writing on our shirts is done by her! 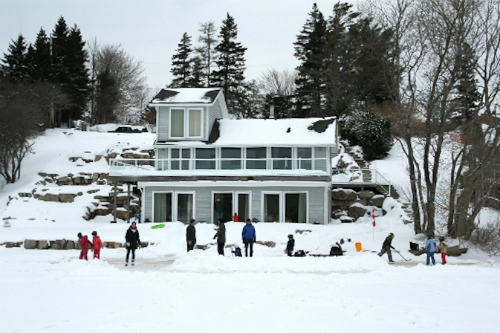 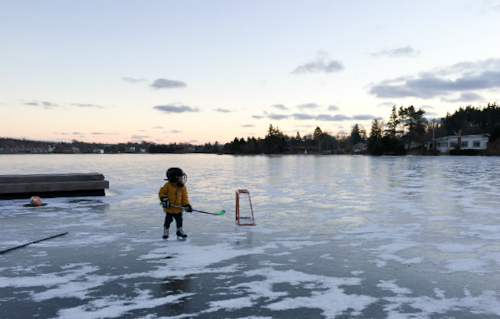 She and Luis also model for me. They have discovered that they can make money by charging 25 cents for a photo with a huge smile! The name suits us; Lausbua is German and means rascal. Besides number shirts, we have added other designs. Every one of them has a connection to our children. It makes my day seeing all these kids in our label. 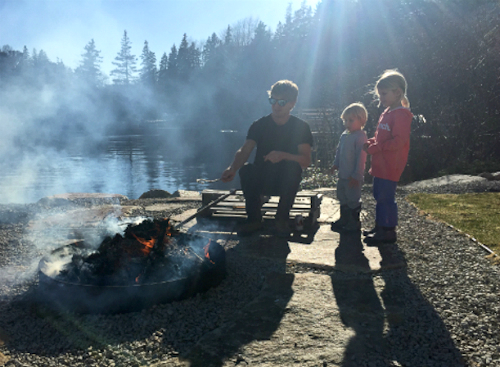 I hope Lili will always remember how much fun it was but also how much dedication it took to put this small business together. I also hope that she learned how much I value her opinion and listen to her thoughts — no matter her age. 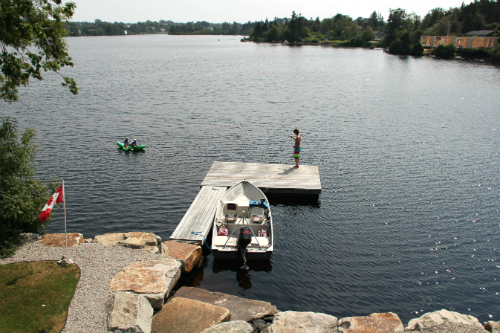 We are living a happy life here in Yarmouth. Even though sometimes I just long for a few hours to sit in a cafe and people-watch, or to grab some ethnic food, I know that living here allows our kids to have opportunities that we wouldn’t be able to offer them in other places. However, by exposing them to different people and countries, different food and customs, I hope they will grow up continuing to explore while having our Nova Scotian home as a base. I hope they will remember the fun we have around the water and traveling the world together. 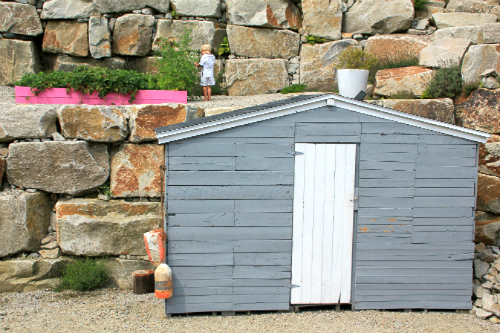 I wish someone would have told me that saying good-bye never gets easier. Every time I leave Europe to come to my new heimat, it gets more difficult. I’m always torn between staying there and coming back here. In my heart I know though that I belong wherever we are happy as a family. For now it’s here, but sometime it might be there — or somewhere in the South! 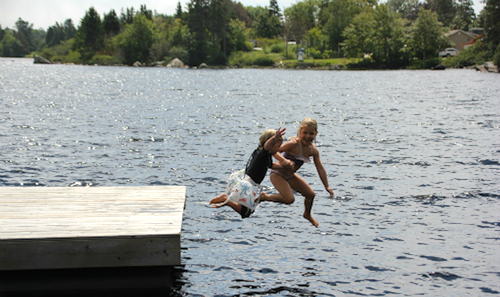 Thank you, Petra! I could look out your windows all day, no matter the season, but the view inside is awfully breathtaking, too. Thanks for sending scenes from the winter, too! You’re a gem for sharing it all with us today.

I wonder how many of you have made a home far, far from your home? Far away from your language and customs and, in a way, your people. How are you doing with the adjustment? What helps? What doesn’t remotely help? And how do you carry it all — the language, customs, and as many people as you can — with you? I love your stories.

P.S. – Are you living with your own kids in a unique way? Are you interested in sharing your home and experiences with us? Let me know! We love to be inspired! And it’s a lot of fun…I promise! Take a peek at all the homes in my Living With Kids series here.