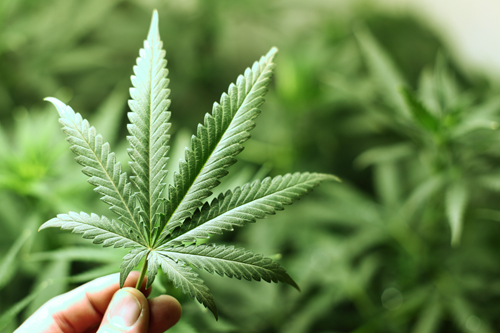 By Gabrielle. Image taken in my back yard. Kidding! Image found here.

Question: do you have an opinion about pot?

I know very little about it, and I’ve never used it, but it’s been brought up in a dozen conversations I’ve had over the last couple of months so it’s on my mind. It seems to come up because it’s becoming legal in more and more places, and it’s also been brought up by people in my life who are using it to manage serious illness.

The discussion often turns to the history of the drug/plant, and several people have told me marijuana should never have been classed with illegal drugs in the first place, because the effects of the drug are far less harmful than many legal substances.

I was thinking about why I’ve never tried it and I could identify three reasons. First, it’s been illegal for most of my life and I tend to have rule-following instincts. I have zero idea of how and where to even buy marijuana. Second, in Mormon culture, illegal drugs of any kind are a big no no. Even legal substances like alcohol and tobacco aren’t consumed. And third, I tend to resist anything that I perceive as possibly making me feel out of control. Hah! So drug use in general has never been tempting for me.

The Mormon aspect has me especially curious. There’s really nothing specific about marijuana in Mormon doctrines about health and diet. Tobacco is mentioned. Alcohol is mentioned. But we don’t call out cocaine or meth or heroin or marijuana — grouping them all instead under “illegal drugs”. So if pot becomes widely legal, will Mormons feel free to use it or still feel like it’s taboo?

I’m also fully aware that most Americans steer clear of illegal drugs. It’s not just a Mormon thing. So I’m wondering about the population at large. Will people that have never considered using an illegal drug make a mental switch with marijuana and put it on their “approved” list? While it’s been illegal for us, will it be normal for our grown kids?

What’s your take? Do any of you feel strongly that it should NOT be legal? Or the opposite, do any of you feel strongly that it should never have been illegal? If you live in a place where it is legal, have you found there is still hesitation from the population about using it recreationally — even legal, does it carry a bad reputation? Do you talk to your kids about avoiding pot the same way you talk to them about other drugs? Or does marijuana feel different to you? If it’s legal but I still have no interest, does that make me close-minded (or maybe just old)?

Or, do you have a better framework for thinking about legal/illegal drug use? I’d love to hear!

P.S. — Good gracious. I just had to look up how to properly spell marijuana. Clearly I’m out of my depth here. : ) I’m sure I sound like an idiot even admitting to be thinking of this, but what I can say? I’m curious. Also, related, this video of 3 grandmothers smoking weed for the first time has been making the Facebook rounds.