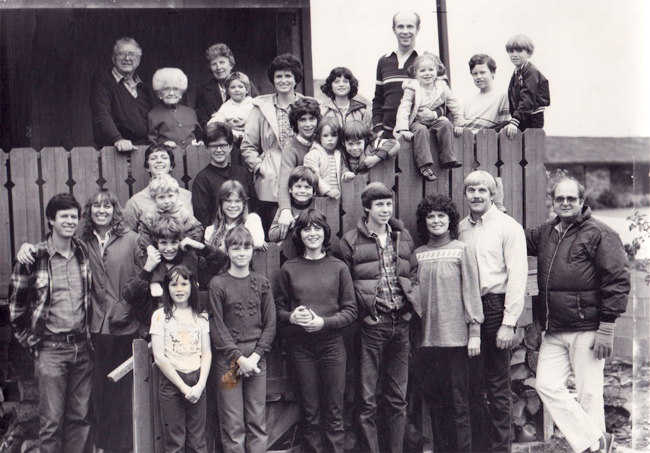 Did you see the article in the New York Times titled The Maternal Grandparent Advantage? It talks about how grandchildren tend to be closer to the grandparents on their mother’s side, because mothers often act as “gatekeepers” to the grandchildren. If a mother doesn’t get along with her inlaws, she may limit the amount of time her kids spend at their house.

From the article: “Researchers exploring family affiliations point out that a so-called “matrilineal advantage” does exist. That is, daughters generally have closer ties to their own parents than to their in-laws, which leads to warmer relationships between their children and the maternal grandparents.”

Some of the examples in the article, of daughter-in-laws preventing or limiting the relationship of their kids with their in-laws, are pretty brutal. But I know it happens. The longer I’ve been married, the more I’ve come to understand how lucky I am to really love Ben Blair’s family (and how lucky it is that he loves mine).

I know many of us are getting back to work after the holiday weekend spent with extended family, and I’d love to hear if your lived experience matches up with the article. When you were a child, were you closer with your maternal grandparents or paternal grandparents? And what about your own kids?

In my own childhood, this was definitely true, but I associate it more with geography and religion, than a maternal/paternal divide. My dad converted to Mormonism when he was in college and that didn’t strengthen his own relationship with his parents. They lived in the Bay Area and we would only see them once a year or so. But my mom’s parents lived a few miles away and we would see them often.

For my own kids, they clearly adore both their Blair and Stanley cousins, and the biggest impact on the relationships seems to be geography. We’ve mostly lived far from our cousins, but when we’ve lived near Blairs — in Provo and Colorado — we spent lots of time with them. And when we’ve lived near Stanleys — in New York and California — we’ve spent lots of time with them too.

I think ages-of-cousins has a big impact as well. For example, there are some Blair cousins who were quite a bit older than my kids and they didn’t have much chance to interact with each other. But as my kids have gotten older, and age differences mean less, they’ve formed friendships with those older cousins based on shared interests.

On the Stanley side, one helpful thing for cousin bonding has been a “Cousins Week” every summer for the last 7 or 8 years. On the Blair side, they don’t do Cousins Week, but they’re really good at having family reunions and get-togethers.

How about you? Has your relationship with your in-laws been the biggest factor in how much time you (and your kids) spend with them? Or is it a geography situation for you? If your own parents have died since you’ve had kids, does that make you more interested in giving your kids a strong relationship with their remaining living grandparents? I’d love to hear about your own experiences with this topic.

P.S. — The image at top features my cousins on my mom’s side of the family — the progeny of my Grandpa Lloyd Pack and Grandma Lucille Evans. I’m in the middle on the top row, 8 years old with a bob and bangs.

82 thoughts on “Which Grandparents Do Your Kids Feel Closer To?”