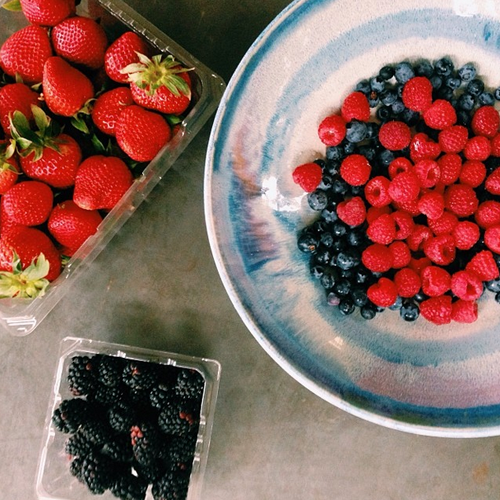 We’ve been in Oakland for 8 months now, and it’s been interesting to see if any of the food habits we picked up in France would stick with us.

When we were in France, I can’t say that we ever completely adopted the French way of eating, but we got close! Partly, because living in such a rural area, we didn’t have much choice.

If you’re curious about French food habits, the two books I read that I found most helpful were Bringing Up Bébé and French Kids Eat Everything. As I spoke to French friends and neighbors about what I’d learned in the books, some people agreed completely with certain parts, but thought others were false stereotypes. So I wouldn’t consider the books as flawless, but I think they give a helpful description.

My observations of French food habits would include:

– They enjoy long lunches with a complete menu. A salad to start, a main course with vegetables on the side, bread, cheese and dessert (though dessert might be a piece of fruit). This is the main meal of the day, and even at a school cafeteria it’s treated as important. We could never quite get used to this, and lunches were still a lighter meal for me and Ben Blair, with evening dinners as our main meal of the day.

– They enjoy smaller dinners, but eaten as a family. Since the vast majority of work places and stores close down by 6:00, evenings are family time.

– There are baguettes everywhere! This is one of those stereotypes I found to be accurate. You can see people walking down any village street with a baguette under their arm at any time. Even the Chinese Buffet in our little town served baguette.

– This may be different in Paris or other big cities, but in the countryside, people do not eat out very often, and there aren’t that many restaurant options. (Such a big contrast to my family’s life in the U.S.!)

– Speaking of restaurants, in our town they were open at very specific times. From 12:00 to 2:00 for lunch, and from 7:00 to 9:00 for dinner. That’s it. If you realize you’re hungry at 3:00 in the afternoon, restaurants aren’t an option. If it’s before 6:00 PM (when stores close), you could stop by a bakery and they may have a sandwich or quiche available, or you could stop at a grocery store and pick up yogurt and fruit.

– Another thing about restaurants in our town is that they don’t turn the tables over. Meaning, they don’t expect new customers to fill the tables after the first ones leave. Customers come around 7:00 and stay until 9:00 and then the restaurant closes. That means, if the restaurant is full, there is no “waiting till a table opens”. Once the restaurant is full, it’s full for the night. I found this to be true in non-touristy restaurants all over the country. That also means, it’s bad form to show up at 8:30 and hope to be served. Traditional French meals are long and don’t really offer “quick bite” options. And one more thing, in our little town, restaurants need reservations so they can know how much food to have on hand. A family of 8 dropping by without a reservation didn’t work.

– When we first arrived there, we had been in the habit of eating out quite a bit, and relying on last-minute restaurant meals on busy work days. I know it sounds silly, but it was hard for me to realize this simply wouldn’t be an option. We had to make dinner on most nights. And we had to think ahead. If we wanted to pick up last-minute dinner ingredients at 7:00 PM, we would be out of luck because the grocery store would be closed. We simply had to think harder about our food. This was tricky for me to get used to, but ultimately a good thing. I definitely think it’s important to put more consideration into what we eat.

– One exception to all of this was McDonald’s. Our town had a McDonald’s and it was the only restaurant open continuously from morning till late night. It was literally the only restaurant option for a hot meal between 2:00 PM and 7:00 PM. Not an exaggeration. And we definitely had our fair share of meals there! Despite all of our planning and efforts to adopt the French way of eating, on some nights, we just didn’t have our dinner act together. Maybe it was a longer than usual work day, maybe we hadn’t picked up proper ingredients, maybe it was too late to get a restaurant reservation — and we’d end up at McDonald’s.

– Another note about McDonald’s. Surprisingly, especially when you consider how much the French care about food, it seemed like McDonald’s is not viewed as evil-y there as it is in the U.S.. McDonald’s actually serves multiple purposes in small communities. For example, in our town there was literally no evening hangout options for teenagers beyond McDonald’s. The libraries are closed. The clothes stores are closed. Everything is closed. But McDonald’s is open late, it’s well lit and safe, it’s centrally located, it has good, reliable wifi and inexpensive food. No doubt hanging at McDonald’s keeps many kids out of trouble.

– I carried a fairly hostile view of McDonald’s in France, and was embarrassed when we ate there, until a conversation with our Dutch friends. They had lived in France for many years and they were very health conscious, growing much of their own food and always seeking out organic sources. But McDonald’s came up one day, and they matter-of-factly talked about how everyone ate at McDonald’s when they were on a roadtrip. It was the only offering for a late night or off-hour meal. They didn’t eat there regularly, but recognized that it offered an essential service to citizens.

– Speaking of eating on the road, the French don’t. Well, they don’t eat in their cars. I say that like it’s non-negotiable, but I honestly never saw anyone eating in their car. Seriously. They don’t eat casually (like a quick sandwich during errands) and they don’t snack. When it’s time for a meal — even a simple one — the food is laid out, everyone sits, and the meal is enjoyed slowly. It wasn’t unusual to see motorists setting out a meal on the side of the road, usually on designated picnic tables. Everyone gets out of the car, the meal is laid out and eaten properly, everything is cleaned up, then they get back in the car and continue on their way. The food is kept in the trunk and no even considers eating it while they drive. One benefit of this is that their cars are crumb free!

– I remember hearing that French people didn’t snack, and couldn’t really understand what that meant. I don’t think of myself as a snacker. What was the big deal? But it’s actually a hugely different way to approach food than we approach it in the U.S.. When you hear “French people don’t snack” what that means is French people — like the entire country! — eat at specific times and only at specific times. Breakfast around 8:00 AM. Lunch at noon. Dinner at 7:00 or 8:00 in the evening. Children have an afternoon snack (sweet not savory) at around 4:00 PM. Some adults enjoy an afternoon snack as well, but many do not. And that’s it. Really. There are specific times for food, and the rest of the time food is totally out of place. Like it would be weird to offer someone food at 5:30 PM, or any time that’s not a specific meal time. Another example, there is no such thing as picking up a cup of coffee and carrying it around with you. In our town, they didn’t even have to-go cups at all. If you want coffee, you sit at a café and enjoy your cup of coffee. Then get up and be on your way. Food is not multi-tasked ever.

This is the thing that I probably found most different about U.S. and French eating habits. In America, no matter how small the meeting or event, we include food. PTA committee meeting at 10:00 AM? We serve muffins and coffee. Kids at the playground at any time of day? We bring juice boxes and pretzels. Friend stops by your house at 2:30 PM? Pull out your cookie stash. Americans can eat as we walk down the street or commute to work or run errands and nobody even notices. There is no time of day where food would feel out of place in the U.S..

– In a French family, kids don’t open the fridge at any random time to grab an apple or a cheese stick. There’s no reason to even be in the kitchen unless it’s a proper meal time. And our family never quite adopted this. Our kids always felt free to snack throughout the day — thought we tried to be diligent about only having healthy options on hand.

– Food quality is better in France. Well, that’s probably not phrased right. Instead, I would say, it’s really easy to access quality foods in France. You can find them in the U.S. too, but often you have to hunt them down or go out of your way to find them.

– When I read both of the books referenced above, I remember thinking: Wow! The French have food figured out. We must adopt these methods pronto! But then, I would picture what our life would be like back in the U.S., and could see that many of the French food habits simply weren’t going to transfer. I would have to be anti-social to reject food at every PTA meeting, or tell my kids they couldn’t snack like the other children at the playground. The French way of eating works, because the entire country adheres to it. The restaurants adhere to it. The grocery stores adhere to it. Work places adhere to it. Families adhere to it. A family could attempt it in the U.S., but in my opinion, it seems like it would be difficult if not impossible.

So, what French food and eating habits have stuck with us since we moved back? There are a few things.

– We’re picky about things like yogurt and bread, and it took us awhile to find versions we really enjoyed.

– We still have simple breakfasts.

– We eat out more than we did in France, but we eat fast food far less than we did before we moved there.

– We shop in small batches. Before France, I would try to buy enough food for a week during one major shopping trip — sometimes filling two carts! But now, we don’t keep nearly as much stocked in the pantry, and we tend to buy our dinner ingredients the same day. I’d say this is probably the biggest change we’ve made.

– The French food thing we miss the most: Our kids long for the amazing lunches they enjoyed in their French school. They would have a two-hour break with a full course meal. No students would pack a lunch. You would either go home for a full, lengthy meal, or eat at the school. Here, they get just a few minutes and won’t touch the school lunch options, opting instead to pack a meal.

This post is getting very long, so I’ll wrap up now, but I’d love to hear:

How do you think your family would adjust to eating in France? Do you currently eat out frequently or depend on takeout? Are there any details I mentioned that appeal to you? What are your thoughts on the whole French food topic?

P.S. — If you’re curious, this is how we shopped and ate in France, and here’s the follow-up post.