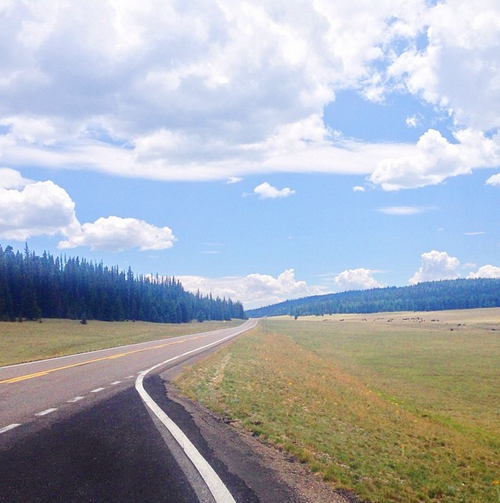 As promised, this post is about some of the logistics of the Epic Roadtrip. I’ll start with a few overarching details. We started the trip with 11 people — 8 Blairs, 1 French exchange student, 1 English exchange student, and a niece. In Las Vegas, the niece was picked up by another family of cousins, so we were down to 10. Then, during our stay in Salt Lake City, the French exchange student flew back to Paris (it was the end of a 3-month stay with us). So on the drive home from SLC to Oakland, there were only 9 of us.

– In the car, we kept a cooler between the front seats. For the long drives we would stop at a grocery store and stock it with water bottles, sliced meats like salami, ham, pepperoni and prosciutto, sliced cheeses, red and green grapes, nectarines, and apples. Outside the cooler, we kept a grocery sack filled with crackers, chips and sweets (ideally nothing melty). We would pass food around the car and everyone would snack as we drove. We would fill the cooler with ice from the hotel ice machines.

– If a grocery store wasn’t available, we would stock up the cooler at a gas station mini mart. Not ideal, but fine for a meal here and there.

– We also relied on fast food. Once in awhile it was during a drive, but more often it was because we arrived back at the hotel after a long day of hiking and wanted to eat as quickly as possible before we fell into bed.

– Other times we ate a sit down meal at a full-service restaurant. Sometimes it was a pizza place — which is often the most inexpensive way to feed a big group. Other times it was whatever restaurant was best reviewed online and also family friendly. These meals were the most expensive, so we spaced them out.

– The hotels we stayed in generally offered a complimentary breakfast. This was ideal on some mornings, but on others, we wanted to sleep in and we would miss the breakfast. The hotel rooms also had small refrigerators, so we could keep milk and cereal around for random meals as well.

By the end of the trip we were so excited at the prospect of home cooked meals!

– To fight boredom on the drives, we definitely made use of screens and head phones. On the evening before a long drive we would remind the kids to take advantage of the hotel wifi and stock their ipods with podcasts or movies for the day ahead — and remind them to charge their devices as well.

– We also listened to audio books over the car speakers. Speaker for the Dead and Anne of Green Gables were both well-received. If a particular kid wasn’t into the story, they could put on headphones and listen to something else.

– At the beginning of the trip, Ben Blair assigned each child a color of car to track. For example, Betty counted turquoise cars and Oscar counted orange cars (over the course of the whole trip, he noted 53).

– As a group, we also tracked license plates. I need to check with the kids, but I believe we found all but 14, plus two from Canadian provinces.

– Sometimes we would take a break from audiobooks or personal screen time and one of the kids would play DJ. We turned up the speakers and everybody would sing along.

– As we planned the schedule, we did our best to separate the long drive days. This helped a ton. We also tried to communicate what to expect the next day as we said our goodnights, so that no one was surprised by a long stretch on the road. I think this definitely helped. Expectations can have a big affect on attitude.

– We didn’t bring pillows in the car. We weren’t really opposed to it, we just didn’t bring them. But, we did bring a stack of beach towels, because I knew we would want to stop and play in every river or lake we could find. The towels ended up doubling as pillows — the kids would lean up against the window for a mid-drive nap, with a towel to rest their head on.

– We also kept one big blanket in the car for unpredictable weather or impromptu picnics. More often, it was used to help regulate the air conditioning in the van. If the back row was hot and wanted  more AC, but the middle row felt chilly, the middle row could use the blanket.

– You could definitely rent an RV for this sort of trip, or even camp the whole way. But with the limited amount of time we had to plan, we knew hotel rooms would be the fastest option for us. We needed 3 rooms, so we looked for bargains. Clean and cheap were the goals. Sometimes that meant staying a little out of the way in order to find something that worked with our budget. We started by sourcing places on hotels.com, but later ended up booking almost everything through the Choice Hotels website — I didn’t know this till I was on their website, but they seem to own all the most common roadside hotel chains throughout the west — Comfort Inn, Econolodge, Roadway Inn and a dozen more. In fact, in almost every town we stayed in, they had 3 or 4 different hotel chains.

– The exceptions were in Las Vegas and near the north rim of The Grand Canyon. In Las Vegas, we got a recommendation from my brother, and stayed at The Golden Nugget. And we stayed at Jacob’s Lake Inn on our Grand Canyon visit.

– We did laundry 3 times, always at the hotels we were staying in. We brought a box of laundry detergent with us, so we just needed quarters for the machines. We would gather everybody’s dirty laundry, sort it all, and do 3 loads (darks, mediums and whites) late at night.

– Unless we knew we had to be on the road early, we would draw the blackout curtains on the hotel windows and sleep in as much as possible. If you’re traveling with teenagers, I highly recommend this. (I love sleeping in as well.)

– As I mentioned above, the hotels we stayed at typically offered complimentary breakfast. Betty was always up earliest and was most likely to eat breakfast at the hotel. Some mornings, Ben would go down to breakfast and bring up a few plates of muffins or pastries and we’d eat in the hotel rooms after the kids were all awake. Other times we missed the hotel breakfast altogether and would pick up something like donuts at a local shop. On at least 2 days, we slept in so late that our first meal was lunch!

– If we’d planned well in advance, I would have loved to book rooms right in the National Parks at Yosemite and Zion and The Grand Canyon. Oh well. Next time!

– If you were keeping track, I realize my instagrams didn’t always line up. At most of the parks there was no phone coverage or wifi, so I would have to post pics later, when we got to the hotel, or even the following day.

– I think this trip was a bit too long. Two weeks would have been ideal, but we were planning the trip around Cousins Week and a wedding, while also trying to space out the longer drives, so the length of the trip couldn’t totally be helped. Happily, the kids were really good sports. We would review favorite parts of the trip as we went, which helped give it that epic feeling, and helped everyone remember the amazing things we’ve seen and how lucky we are.

– An annual national parks pass is only $80! We bought ours on our visit to Sequoia National Park a couple of months ago, so we were set for this trip. It gave us free entry to Yosemite, Zion, The Grand Canyon, Lake Powell, and Arches. Not bad!

– This one is a silly tip, but I noticed when we were at Zion and at other red rock destinations, the photos looked best when the kids were wearing blues and greens. Reds and oranges make them blend into the landscape!

– Something I reminded myself of as the receipts piled up: Vacations are not for saving money. We save our money, so we can spend it on vacations.

– Ben drove the entire time. What a champ! He knows driving is not my favorite thing, so I managed kids and food and charging devices while he did the driving. I know his was the harder job!

Okay. That is lot of information. I hope it’s more helpful than overwhelming. And I’d love for you to add your own tips, advice or observations in the comments. I’m sure many of you are roadtrip experts! Also, I’m curious: if/when you take roadtrips, do you prefer to be the driver or a passenger?

P.S. — On an earlier post, someone asked if the exchange students chipped in. We found it simplest to have our exchange students pay for their airfare and any souvenirs they wanted, but we took care of the rest of their expenses while they stayed with us. Ralph will be heading to their homes this fall and we can make the same arrangement in reverse.