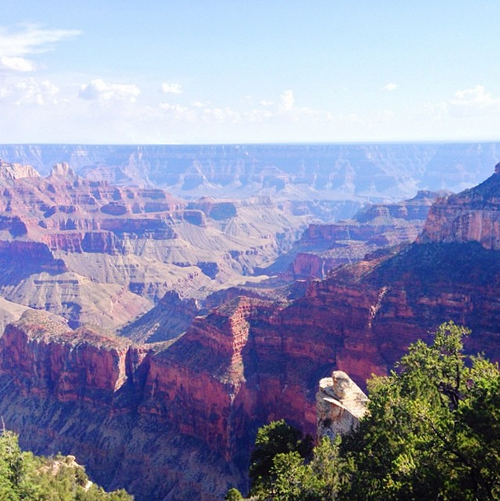 This was an especially fun stop for me because I hadn’t been to The Grand Canyon since I was very small, and only had vague memories of it. As I write this, I can see my thoughts on The Grand Canyon are a bit scattered, so I’ll write things up in a list form. That way, I’m less likely to forget things — and I can skip from topic to topic freely. : )

– First, The Grand Canyon is BIG. So much bigger than it was in my head. In fact, while we were there, we read that you would have to rocket up into the Earth’s atmosphere several miles in order to see the whole canyon at once. So when we took in a view from the edge, the canyon seemed massive, and yet we knew we were just seeing a bit of it.

– I’m not particularly afraid of heights, but peering off the edge of the rim, down into the canyon made me catch my breath. I kept feeling like it was the view from an airplane. The canyon is so deep — a mile deep in places — that being on the edge of it feels insanely high.

– From what I could tell, if you’re at The Grand Canyon for one day, it’s mostly about taking in the views. Even the hikes we went on were on the surface and were all about ending at a great view looking down into the canyon (at other National Parks, even in one day, you can interact with the park a bit more). If you want to go below the rim and really get into the canyon, plan on a multi-day commitment or maybe even a legit backpacking experience. Someday, I’d love to hike with the whole family into Havasupi Falls. I hear you have to get hiking permit reservations over a year in advance! (But that could totally be a rumor.)

– We were on The North Rim. The South Rim is much more popular and touristy than the North Rim, and most of the famous photos you’ve seen are taken from The South Rim. But we loved the quieter option! We picked it because it was less driving based on where we were coming from, but we were delighted with our choice. The North Rim still has a grand lodge, grand views, a visitor center, food options, and a gift shop — but it feels calm, and there are fewer people than at any other National Park stop we’ve made. The North Rim and South Rim are only 12 miles across from each other, as the condor flies — but the drive between the two is over 5 hours.

– It was a super hot day, so after we’d taken in some of the short hikes off of the Visitor Center, we hung out at the lodge and listened to the Ranger talks. One was about the California Condor and one was about the Grand Canyon Rock Formations. We learned that at a few years ago, the California Condor population was down to 22 birds, and predictions of total extinction were everywhere. But hopeful conservationists have brought the population up to over 400 birds. They are still endangered, but the progress is good! The rock formation session was essentially a geology class and we loved it. Flashbacks to middle school earth science class! All the ranger talks are free.

– Speaking of the Lodge, the old school National Park lodges are fantastic, and this was no exception. Grand views, huge old leather chairs, an amazing dining room.

– Many of the National Parks have a Junior Ranger program specifically geared toward that park. Oscar and Betty did the program at Yosemite and another one at The Grand Canyon. The programs are free. The kids pick up a booklet with instructions and after they fulfill the requirements — things like taking in nature observations or asking a question of a Park Ranger — they are sworn in as a Junior Ranger and receive a badge. My kids LOVED this.

– The drive coming to The North Rim surprised us. The landscape changed from red rock desert to forests and grassy plains and grazing bison. It felt like I was in Yellowstone land!

– We had originally planned on staying two days at the Grand Canyon, but switched up our plans so that we could fit in Lake Powell as well. And that was good. We took in the views, hung out at the lodge, took advantage of the Ranger talks, and had a more physically relaxing day than we’ve had at other parks.

– We stayed at Jacob’s Lake that night. It’s a hotel about 15 minutes outside of the park, famed for it’s homemade cookies! The next morning, as we went to the little shop to round up some breakfast, we ran into our niece Lindsey, who is working at Jacob’s Lake for the summer before she heads to college. The best sort of surprise!

Yay for the Grand Canyon! Have you ever been ? North or South rim? Any tips?