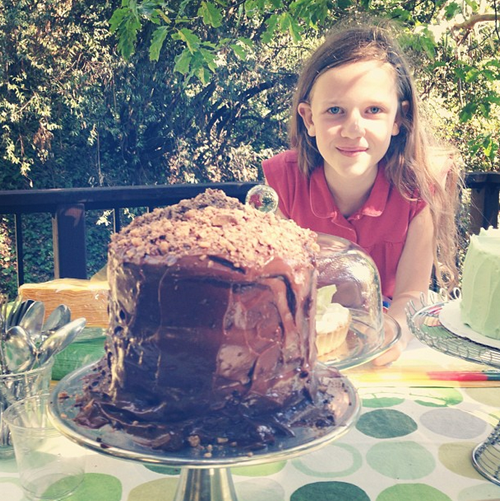 Do you host a birthday-party-with-friends for your children each year? Something fun and maybe themed with invitations, decorations, games, refreshments and a big cake? I love hosting parties like that!

But as our family was growing, I was intimidated by the idea of throwing a big party 6 times each year, once for each of our kids. So fairly early on, we decided we’d do friend parties on some years, and simpler, family parties on others. Originally, we planned to host friend parties at age 1, 3, 5, 8, 12 and 16. But it hasn’t worked out that way!

When our oldest, Ralph, turned 12, we were still quite new to Colorado and he hadn’t had a chance to make many friends yet. So a friend party didn’t make sense. We decided to skip the party and took him on his first trip to San Francisco instead (at the time, I would have never guessed we would end up living in the Bay Area!).

Then, when Maude turned 12, we had just barely moved to France, and again, a friend party didn’t make sense. So using the precedent of Ralph’s trip, we took  Maude to London to see Wicked. (We lived so close! Just a ferry ride away.)

And then we moved here to California, just weeks before Olive’s 12th birthday, and for the third time, a friend party didn’t make sense. Plus, now we had a bit of a tradition happening with a 12th birthday trip. Olive started daydreaming about seeing Wicked in New York (she hasn’t been back to New York since we moved! And she still has a best friend there — who she wanted to invite to the show, of course.) But we needed a more budget-friendly idea.

So, last week, Olive celebrated her 12th birthday with a road trip to Los Angeles to see Taylor Swift in concert!

Ben Blair took her to the concert and Olive had an amazing time. As soon as we bought the tickets, she did a bunch of research on Taylor Swift concerts and ended up making a costume in advance, stockpiling glow stick bracelets, and memorizing every word of every song in the concert play list in anticipation.

Since this plan came together last-minute, we ended up buying the seats on Stubhub, and we weren’t sure what to expect — but they were great! In fact, Taylor’s parents walked by her seat several times and talked with Olive. Taylor’s dad even gave her a handful of guitar picks! Ben and Olive stayed over night in LA, slept in, and drove back the next day. Olive keeps saying it was the best birthday ever!!

Ralph’s 16th birthday was on Monday — which was also the first day of school. All these years I’d imagined hosting the coolest 16th birthday celebration. A surprise party (of course!), with loads of friends, a DJ, an awesome theme — and if we could pull it off — keys to a memorable car waiting in the driveway.

Oh man. We couldn’t have been further from that vision. We just moved here, Ralph doesn’t know a soul yet, we barely started talking about driving lessons (it doesn’t happen till 18 in France, so it wasn’t on the minds of his peers), prepping for school and getting the kids registered has been a crazy amount work, and let’s be honest, I’m not doing well enough mentally to host much of anything at all. So we had to come up with an alternate plan, and happily, Jordan gave us a great idea.

Knowing Ralph has a huge passion for movies, on Friday, she arranged for a tour of George Lucas’s Industrial Light & Magic — or as we keep calling it, the Star Wars Campus — over lunch. And then that evening, our friends from church arranged a tour of the Pixar Studios! Ralph was so excited he could barely stand it. He loved both tours and can’t wait to find an excuse to go back. I think it also helped him visualize what he might want to do career-wise in film.

On Sunday, we gathered cousins for cake and ice cream to celebrate both Olive and Ralph (their birthdays are just a day apart). And on their actual birthday, as per tradition, each one had breakfast in bed and opened a few small gifts.

Yes, it was far from our original plans for their birthdays, but I think it worked our wonderfully. I think they both felt celebrated and loved.

And now I’m curious: How do you handle birthdays? Do you like throwing a yearly party? Or do you prefer to keep things simple? Have you ever considered a birthday trip to mark a certain age? And are any of you raising introverts who would prefer not to have a party at all?