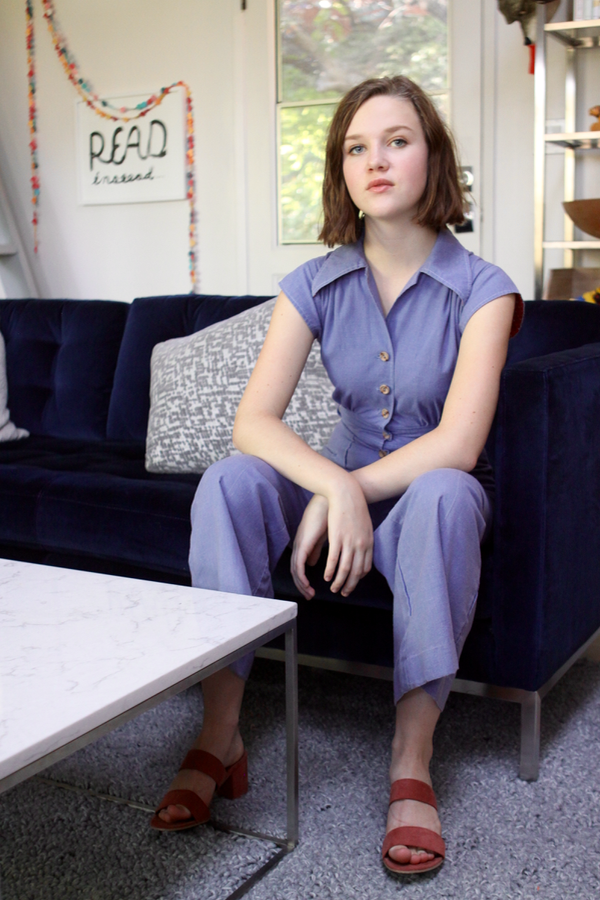 [ Note from Design Mom: I knew I would be busy at Altitude Summit today (waving from Palm Springs!), so I asked Karey Mackin to share this essay today. It’s so good you will die. ]

An acquaintance who never quite made it to friend level was having a boy baby around the same time marriage equality was legalized. During one casual conversation about names, she clasped her hands together and said, “I’m so happy my son is being born at a time when he can marry anyone he chooses.”

“Ohhhh,” I replied, waving away that idea. “Tell him he doesn’t have to get married. Tell him he doesn’t have to do anything just because society says so…” I scare-quoted my fingers when I said society. “He can do whatever he wants to do. Tell him that. And you should totally name him Oscar. I think it really gives off the vibe Don’t Mess with Me, I’m a Grouch, and also have you seen the original Odd Couple? Genius.” I scare-quoted all that, too, and then ended with a shrug and this: “Then he may not get bullied, you know?”

Her face fell, and I quick tried to fix it all.

“What am I saying? Name him anything! His name won’t matter one bit in terms of whether or not he gets bullied. Chances are, he’ll probably experience some sort of bullying anyway…tell him everyone does…but you can handle it, Mama. You got this.”

I’ve dashed very few hopes in my time, but this one seemed like it left a mark.

Sigh. I am not a hit with brand new parents.

They seem so old-fashioned to me. Kind of like an early episode of Little House on the Prairie. Full of wide-eyed optimism, polite language, and never any raised voices from the main characters. Except drunk Mr. Edwards. I always liked that guy.

See, I’m in the final season of The Jetsons. The one where Judy swears and listens to Migos, and Elroy sneaks his juul in the bathroom at school.

One of my friends has a new teenager, and she knows I’ve watched pretty much every episode of that show. Twice. I’m actually on my third viewing.

I think I know. And since my friend is not nearly as fragile as a brand-new parent, I told her what I think I know. I can tell you, too, if you’d like? (Note: It’s girl-centric, as I have three of them and they’re all I know. If you have another kind of kid, I’m not sure how much of this will be useful to you. Apologies in advance.)

My advice is this: Make sure you tell her first.

Be the first to tell her what might be asked of her, initially in a flurry of increasingly persuasive texts, and then in gasp-inducing, heart-pounding photos, and then in a pitch-black closet at a party. Remove the shock, remove the shame, and make room for all her power. We all need enough room for our power, especially if we ever find ourselves in a pitch-black closet at a party.

Be the first to tell her she doesn’t have to do anything she doesn’t want to do. Except make her bed every day because that’s just a nice way to live, and also never forget to be in awe of what’s possible. It’s all possible.

Nope, she never has to say yes to anything, but she can if she’d like. That’s her choice, and hers alone. Also, tell her it’s good to remind herself why she’s a no. Tell her to check in with her values and goals every so often to make sure they haven’t strayed too far from each other. They’re most useful when they’re within reach, especially if she ever finds herself in a pitch-black place.

Tell her if she wants to send pictures of her body to anyone, to make sure she sends ones she’ll be proud of everyone seeing. That goes for words, too. Also, decisions. Be the first to tell her if someone sends her something she doesn’t want – pictures, words, or opinions she never requested – that she doesn’t have to accept them. This is her life, and hers alone.

Be the first to tell her about those moments when she’ll feel worth less than worthless. They’ll come. And when they do, tell her to look at herself hard in her mirror and deep in her heart and remind herself who she is. Swearing helps.

(This is how it goes in my house: “Remember who you are…” I say softly. There’s usually a smile, a tilting up of a chin, and then this: “I’m Gracie F*cking Mackin.” And…she’s back. You may borrow that, if you’d like. With your own name, of course.)

Listen. This advice may seem harsh as heck to you. “This will never happen to me,” you think. “None of this will ever happen to my child.” But it might. So, I’m telling you what I think I know, just in case you ever need it.

Be the first to tell her not to judge herself on stupid stuff like how fast she runs the pacer in PE and pants sizes, reminding her that even Offset likes a b with some cellulite. She’ll know what that means. Tell her to find her comfort food, and that sometimes comfort food isn’t food at all, so maybe a better thing to tell her is to find her comfort people. Potato, potato.

Be the first to tell her to tell her to believe in something. Magic, heaven, guardian angels, Santa Claus, lucky pennies, whatever. Because people who don’t believe in anything usually have a hard time believing in themselves.

While you’re at it, be the first to tell her the unbelievable power of a few deep breaths. Tell her to root for her friends, and be the first to remind her we’re all friends in this life if we’re lucky. Tell her as often as you can how lucky she is. But mostly tell her you’re the lucky one because you got her in this life. Yes, tell her that one more than anything.

Is this easy? Is it easy to tell her first? Not at all. It’s uncomfortable and you’ll gulp a lot and turn red and your stomach may feel like it does at the beginning and middle of the most awful roller-coaster ever designed, and why the heck did you even get on this ride in the first place, anyway?

But then comes the ending…that last stretch when the wind sweeps over your cheeks and you’re pretty sure you’ve made it and your breath slows a bit and you kind of let go of your grip with a little gasp but only because you have to…it’s someone else’s turn now, see…and you look back at it all with more than a little bit of wonder and think, “Oh. I did that. I DID THAT.”

And you’ll tell yourself that it was the worst time of your life at exactly the same moments it was your best and most favorite, and you’d probably give everything you’ve got to go again and again with her, but wouldn’t you know it’s time for her to go it alone.

Tell her all that, too. She’ll hopefully need to tell it to someone else someday.

But you. Oh, you. You were the first one to ride it with her. All of it. You did this. YOU DID THIS. And so, rest assured, whenever she gets scared and thinks she’s way too far off the tracks or God forbid thinks she wants to get off for good because she’s in a tunnel and it’s all so pitch-black no matter where she looks, she’ll reach out and find all the things you told her. First.

You got this, Mama.

I was out for a run the other day, and spotted some moms and one dad playing with their babes at my neighbor’s house. The little ones were selling ball-point pen illustrations.

“Ooh! Is this the Easter Bunny?” I squealed.

They covered their giggles with their hands and politely informed me it was not the Easter Bunny because only babies believe in the Easter Bunny. No, these were dragons fighting unicorns.

“Well,” I scrunched down to their level and whispered, “The Easter Bunny, dragons, and unicorns…I believe in it all.”

I sure hope it wasn’t the first time they heard that. But I really hope it’s not the last.