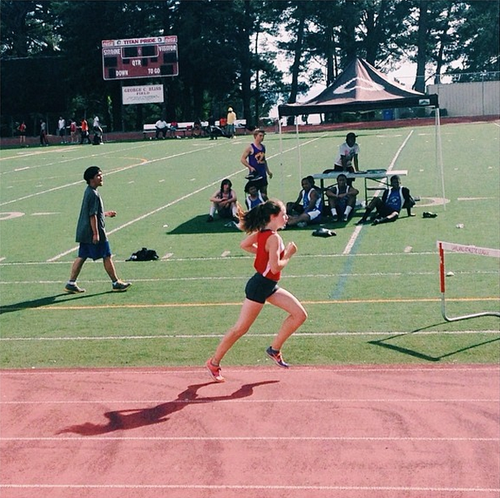 Last year around this time I talked about the fact that we were enrolling our kids in an Oakland Public High School, rated a 2 out of 10 on the Great Schools website. Since we’ve entered our second year in the same school — now upgraded to a 3 out of 10 — I thought you might enjoy a little update. I don’t want this post to be a repeat of last year’s, so I’m going to focus on the individual experiences of Ralph and Maude at the school.

– I think one fear parents may have is that it might be hard for their child to shine in a big, urban school. But Ralph felt he experienced the opposite. Ralph loved the opportunities the high school gave him. In the fall, he tried out for the school play and won the part of the Italian Father in “Golden Boy”. Since he was a new student, and only a sophomore, he thought they probably wouldn’t consider him.

– He also found opportunities in music. Ralph plays trombone and he joined the Marching Band and Jazz Band. He’d always been pretty casual about his trombone playing, but found he had to really practice in order to keep up with his bandmates. Joining the band really pushed him in a good way, and gave him experiences he couldn’t have had any other way — the band performed in competitions around the state, parades around town, even a renowned jazz club in downtown Oakland. At the end of the year, he laughed when he received the award for Most Improved Band Member. : )

– I think another fear of parents when looking at low-rated schools is wondering if their child will be challenged. Will the courses be rigorous enough, or will they be built around the lowest common denominator? Ralph seemed to experience some of both. There were serious classes like AP World History that challenged him. But there were also classes that felt like a review of earlier work. Certainly, some of this depended on the teacher.

– One thing that helped Ralph integrate right away was that he was super involved. Have you ever watched the extra curricular activities scene of Rushmore? He was like that — joining every club, participating in every possible activity. He’s in the yearbook at least a dozen times. Of course, some of that is just Ralph’s personality, and not every student would want to be super involved. But it was good for us to see how many options and opportunities there were at the high school.

– Because he was so involved, even though he had only been at the school for one year, he got to know a ton of his fellow students. In fact, at the end of the year, his peers recommended him for student leadership.

– Ralph really loves the high school and his friends there. Even though he’s in England and France until December, he attended the first few days of school here in August. His birthday was that first week of school, and his friends threw a sweet party for him. He misses his friends, but knows he’ll be back in January.

– One of his closest friends graduated early so she could work on a film, and I think he’s also attracted by that idea. One of our fears has been that we’ve ruined Ralph’s high school experience since he missed his freshman year. So his friend’s choice was a comforting reminder to him, and to us as parents, that lots of kids are no longer having a “classic American high school” experience, and that’s okay.

– Now Maude’s turn. Last year was Maude’s freshman year and she was SO HAPPY. Maude really, really thrived at the high school. She joined the Cross Country team right off the bat. This was her first opportunity to try distance running, and she had no idea how much she was going to like it. She was super dedicated and practiced 6 days a week. In fact, she would run laps around the hotel if we were traveling, and she couldn’t make a practice.

– As Cross Country ended, she transitioned to the Track Team. Again, she loved it. Again she was super dedicated and took her workouts seriously. She loved traveling with the team. Because of Cross-Country and Track, she is also stronger than I’ve ever been! Watching her do pull-ups is a delight.

– While I’m talking about sports, one thing I appreciate about the school, is that although there are lots of teams and sports, the school doesn’t have a focus on athletics like my own high school did. There are many ways to shine beyond sports.

– Maude worked hard and earned good grades. I think she especially appreciated her classes were in her native language. : )

– In classes she had a similar experience to Ralph. Some of the classes were challenging and rigorous. But she felt like others were being constantly disrupted and were frustrating.

– I think another fear parents might have for their children in a big urban school is wondering if they’ll find good friends. And Maude definitely did. She found that many of the dedicated students in her classes were also on the cross country team, so she was able to find friends that had the same types of priorities she had. She said there were lots of ambitious kids, trying their best, and she felt like you could find them in any class, especially the difficult classes, and in places like orchestra and band.

– She said there are plenty of students aiming for top universities, and mentioned there’s a joke that Stanford is their “safety” school.

– We continue to be impressed with the opportunities the school offers. This year, Maude is taking journalism and wants to launch a school paper. Her teacher seems to trust her and the fellow students and allows them lots of independence and decision making power.

– At the end of last year, Maude was also recommended by her peers for Student Leadership, and she’s part of the leadership now. She’s currently working on student events and loves it.

– Though our kids thrived (and continue to thrive), the school is definitely not perfect. I mentioned disruption above, and that’s a real problem. And then there are little workarounds we’re having to figure out. For example, both Ralph and Maude took Advanced French last year. The next class would be AP French, but not enough students signed up for it, so the school didn’t offer it. Which means we’re going to have to figure out another way for them to take the class — probably an online option.

– Another thing that surprised them (and us). There were fake bomb threats throughout the year. Like maybe 5 or 6. The kids would all have to walk down to the football field until the threat was confirmed fake. Which it always was. Apparently students would call in a bomb threat if they wanted a test to be cancelled. Crazy! That said, our kids didn’t feel unsafe. Unlike many high schools in the U.S., there isn’t a police presence, and there aren’t metal detectors either.

– I mentioned in the P.S. of last year’s post that there is a performing arts school in Oakland that students can try out for. We put the tryout deadlines on our calendar and I asked both Ralph and Maude if they had any interest, but they were both so settled at the current high school, that they didn’t even hesitate, they had no interest in trying out. They were thriving in their current situation.

As you may remember if you read last year’s post, we went in knowing the kids might love the school or might hate it, and that we were willing to try other options if the kids weren’t thriving. Of course, that’s still true, and would be true wherever we lived, and even if our kids went to the “best rated” schools. If the kids aren’t thriving, we’ll look at other options.

But I would definitely say this, if you live in a place where you feel like your kids can’t attend the public schools because of low ratings, don’t automatically dismiss the idea of your assigned school. Before you reject a school based on its rating, go to the school and see what it is like. Talk to families that attend. Talk to someone on the PTA and see if there is a core of involved parents. Remember that the parents of the kids who attend low-rated schools love their kids as much as you love your kids.

Now tell me friends, would you ever send your kids to a high school rated a 2 or 3? Does this whole topic of school ratings stress you out? Do you feel like we’re doing our kids a big disservice by putting them in a low-rated school? I’d love to hear your thoughts!

P.S. — Oscar & Betty are continuing at our local elementary school. Nothing new to report yet! And June is in a French + English preschool.